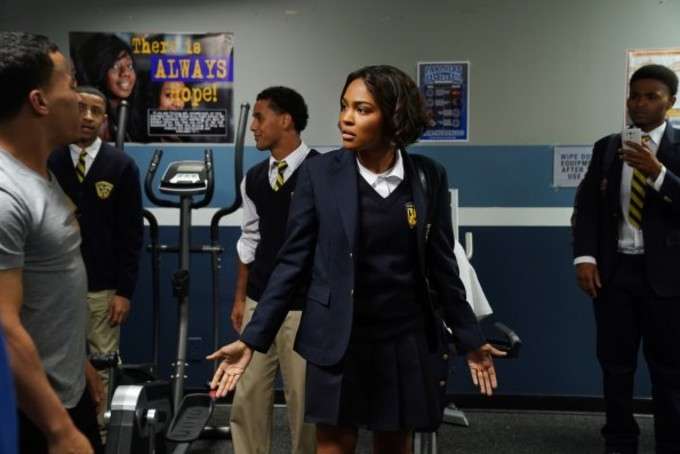 With Freeland now openly occupied by the ASA, the Pierce family is more divided than ever, literally and figuratively. Still held in captivity, Jefferson and Lynn come into conflict over whether or not they should keep trusting Agent Odell. Trapped outside of Freeland, Anissa turns upon her allies. Gambi continues to organize the resistance as best he can, as Jennifer tries to get by on her own despite feeling more powerless than ever.

A Tasbih is a devotional act practiced by some Muslim sects involving repeating the phrase "God is perfect." It is often said as part of a prayer ceremony, being repeated 33 times at the end of the prayer.

Jefferson is able to passively block cameras and recording devices around him with his powers.

According to Lynn, Jefferson's command of his powers and his power levels have been growing while the ASA have been experimenting on him.

Gambi has a cloaking device similar to the one he made for Jennifer, but his enables him to look like a younger man.  He uses it to disguise himself as an ASA Soldier.

Gambi approached Henderson, saying he needs one of the ASA's special Comm Drives to get through the ASA's firewall in order to get Anissa back into Freeland.

The ASA detects a correlation between the neuron spikes of Jefferson's brain activity and energy fluctuations within the ASA base whenever Jefferson erects his "privacy field."

Jefferson: It's always about more and more power with the ASA. I've had it.
Lynn: How can you be so certain? These people weren't scared of Tobias but they're scared of the Markovians? Doesn't that say something to you?!
Jefferson: What if the Markovians are some sort of pretext like the so-called weapons of mass destruction in Iraq? The ASA has been dogging Freeland my whole life. Now we only hurt ourselves if we help them weaponize these kids.
Lynn: What about the Green Light Babies? And the Pod Kids?
Jefferson: Look, listen to me. Now, if you don't help them, the ASA will see that they can't get their meta-human weapons here. Eventually, they will abandon their masterplan and leave Freeland.
Lynn: Eventually?! You sound just as ready to sacrifice innocent children as Odell. Well, I'm not.

Maryam's health is getting worse, with her hair and fingernails falling out and it being impossible for her to keep any food down. She later says she's begun bleeding from the eyes.

Lala is revealed to have Martin Proctor's briefcase. He can't activate it and doesn't know its significance beyond it being important to Tobias Whale.

A new resistance television network, hosted by a man called Truthteller Johnson, reports that the ASA killed the five service members rather than the Markovians.

Truthteller Johnson also introduces a woman, who talks about how Tobias Whale working with the ASA to turn her child into a monster before killing him. The woman is Nichelle Payne, mother of Khalili Payne (aka Painkiller.)

Gambi is revealed to be the tech guy behind the Resistance TV broadcasts.

Jefferson is passively using his powers to block the surveillance equipment in his and Lynn's room.

Commander Williams agrees to bring in a secure cell-phone that Jefferson and Lynn can use to record a message for their daughters.

Jefferson and Lynn are moved into a more luxirious room, stocked with their favorite foods and drinks. They are both also given complete freedom to move around their sector.

Lynn is a red wine drinker. Jefferson has a preferred branch of scotch.

According to Commander Williams, four Green Light Babies and two Pod Kids have died since the occupation of Freeland began, with a dozen more children near death. He seems earnest when he says he's glad Lynn agreed to help the ASA.

Jefferson says the ASA is just trying to showcase their power and how long they've been monitoring The Pierces. Lynn concedes the point, but refuses to let that stop her from saving the lives of the reen Light Babies and Pod Kids.

Henderson is after a particularly drug dealer named Sinzell Johnson, who has become the effective boss of The 100 since the ASA captured Tobias Whale.

Detective Sgt. King is taken into ASA custody by Commander Williams as a possible Green Light user and metahuman.

Blackbird is revealed to have made a deal with the Perdi of South Freeland to house the escaped metahumans she can get out of Freeland. Unfortunately, they are starting to tax their resources and the Perdi are starting to think Blackbird is demanding too much for the help she gave in defeating Looker and the Sange in Season 2.

Agent Odell tells Jennifer that her family has been exempted from the food rationing imposed on Freeland. Jennifer refuses to accept it, saying she and her family don't deserve special treatment. Agent Odell contends that, given their powers, that they do.

Jennifer intentionally shorted out the surveillance equipment in the Pierce household.

Agent Odell delivers the phone with Jefferson and Lynn's message to their daughters. He says Jennifer can use it to contact him if she needs anything and that he wants her to believe he is on her side.

Lala gets together with some of his former 100 members and starts plotting how to retake the drug trade in Freeland from Sinzell Johnson.

Gambi asks Jefferson for help in acquiring one of the ASA's special comm drives so he can hack their firewall.

Commander Williams has taken over Club 100 as his base of operations in Freeland proper.

Jefferson gets Gambi the drive he needs.

Lala kills Sinzell Johnson, who he discovers is gouging the people of Freeland on simple food and water.

The Perdi make it clear they no longer trust Blackbird.

Gambi gets a message to Anissa, warning her that the Markovian government seem to have agents finding a way to get into Freeland and they're close to the Perdi farmland.

Lynn runs tests to chart Maryam's powers, despite her health.

Khalil Payne loved to draw and Jennifer still has some of his drawings.

Jamillah Olsen is continuing to do broadcasts on the conditions in Freeland for the outside world. It is unclear how she is getting her signal out. She reports that scores of people have been arrested or shot for resisting the ASA in Freeland, that the Markovian government tried to raid the metahuman processing facility and that Blackbird has become the symbol of the Resistance fighting the ASA.

Khalil Payne is revealed to have been resurrected and empowered by the ASA, his mind now "programmed" with a classical education (equivalent to Master's Degrees in Literature, Philosophy and Mathematics), knowledge of human anatomy, small arms marksmanship skills and military history. He has also been programmed to obey any orders given to him by ASA Control without question.

Khalil Payne, now calling himself Painkiller, is sent to kill his own mother.

Commander Williams expressed doubt about the wisdom of sending Painkiller to kill his own mother. Agent Odell says it will be an ideal test of the new brain chips they are using to control metahuman agents.

Agent Odell tells Lynn that the ASA knows Jefferson is using his powers to stop them from spying on him.

Maryam tells Jefferson that the ASA had been forcing the metahuman teens to fight each other.

Maryam also tells Jefferson that one girl had her fingers and toes fall off.

Jefferson tells Lynn what he learned but she's more upset that Jefferson is jeopardizing her work with the ASA by no cooperating than by that he discovered.

Jennifer breaks up a fight at Garfield High

Anissa comes off as really incompetent when it comes to diplomacy or doing anything other than busting heads.

With the ASA now openly building walls around Freeland and effectively turning it into Agent Odell's kingdom, this is very much like the image of Star City Judd Winick presented in his Green Arrow: One Year Later storyline.

Borderline unwatchable, with all the most interesting characters in the series sidelined and Lynn being handed the idiot ball to create an unnatural conflict between her and Jefferson, when they should be joining together against their captors. Ditto Anissa blowing off the concerns of the Perdi an destroying her own underground railroad. Nearly everything heroic in this episode, up until Jennifer breaks up the fight, is accomplished by Gambi off-camera.  They bring Painkiller back as a brainless thug and there's no Tobias. This season needs to step up in a hurry.
Posted by Starman at 12:24 PM