Green Lantern Corps #18 mirrors the previous issue in many respects, for good and ill.  Like last month's issue, the plot focuses upon The First Lantern tormenting captive Lanterns by showing them visions of how their life could have changed if things had been a little different.  This time, the focus is upon Green Lantern John Stewart.  The good news is this issue gives John Stewart a definitive origin.  The bad news is this new background discards much of what made John Stewart such a memorable and unique character. 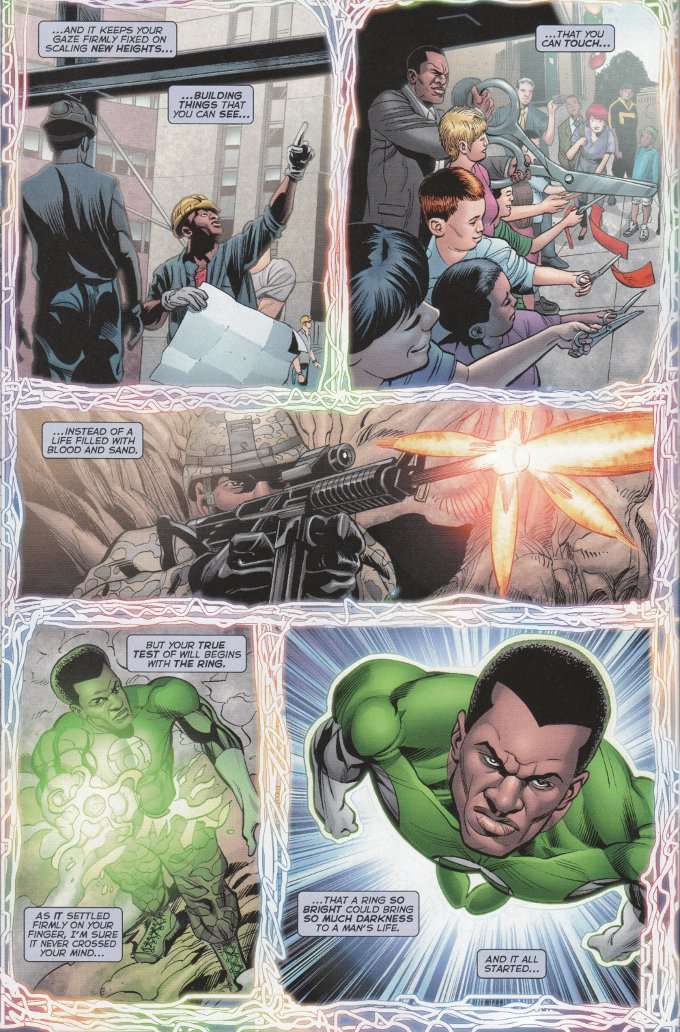 Before the Justice League animated series became popular, John Stewart had always been an architect by trade.  A retcon around the time of Infinite Crisis altered his background to be more in line with the  better-known version of the character from the cartoon who was an ex-Marine.  It was assumed that the military service came before John's eventual employment as an architect, particularly since John's architect training was said to have influenced how he made his constructs.

This retelling suggests that John has never been an architect and that he has always been a career soldier.  While this does better fit the personality John Stewart has developed in recent years, it still saddens me to see that aspect of the character - that he was the logical thinker and the builder among the Green Lanterns of Earth - be sacrificed for no apparent reason.  Worse, there's no mention of John's marriage to Katma Tui - the alien Green Lantern who had replaced Sinestro and one of the most prominent female Lanterns of all time! 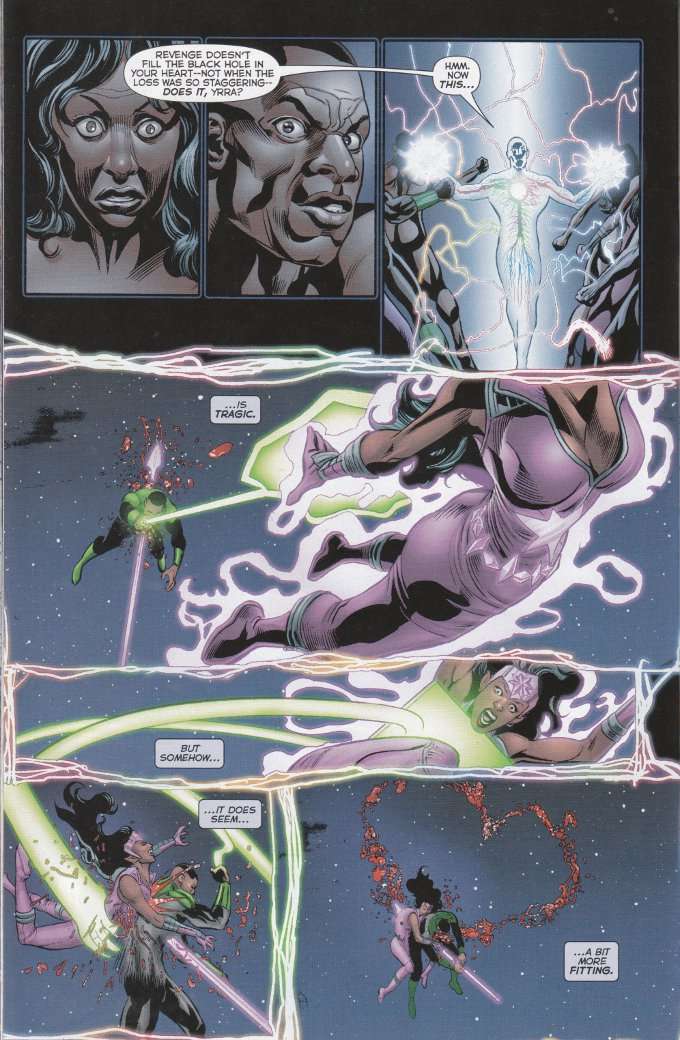 There's a similar problem with the portrayal of Yrra of Xanshi a.k.a. Fatality.  Her background is similarly troubled in the wake of The New 52.  Created back in the days when Kyle Rayner was the last Green Lantern, she was the sole survivor of a world which John Stewart failed to save due to his arrogance.  She swore revenge on all Green Lanterns and killed a number of them before setting her sights on Kyle and John.

In the time afterward, she lost both her arms in battle, had them replaced with stronger cybernetic limbs, was given a Yellow power ring on two separate occasions and finally became a Star Sapphire.  She's had her own arms back for a while now but although we see her being tormented alongside John Stewart, the sum total of her contribution to this issue is appearing in an alternate timeline where she and John Stewart killed each other.  It seems a waste of one of the richest characters this series has.

The artwork by Chriscross seems conflicted in comparison to his work on Green Lantern Corps Annual #1.  There are many panels where the character's mouths are stuck open and their eyes bugging out in a manner that suggests that Marty Feldman acted as the artist's model for the scene.  Thankfully, this problem is limited to the close-ups on individual characters.  The action-scenes making up most of the issue are well illustrated and I have no complaints about those moments.
Posted by Starman at 9:22 PM