Green Lantern Corps #17 is a good comic.  I would like to say that right here at the start because some of what I'm about to say may give the impression that I didn't like this book.  I loved this book but it is not without flaw.  And yet those flaws lie at the heart of why I found this book so enjoyable.  For while this book does stand well on its' own terms, I find it stands ill at ease with the Wrath Of The First Lantern storyline that it is part of.  But I'm getting ahead of myself...

I'd also like to say, before I dig myself in too deep, that I still think Fernando Pasarin and Scott Hanna are perhaps the most underrated artistic team working in comics today.  I can't think of a single off-issue that they've had in their time on this series.  And the opening double-splash page depicting Guy Gardner in his various guises and personas while various events from his life play out in the background struck me immediately with its' complex beauty. 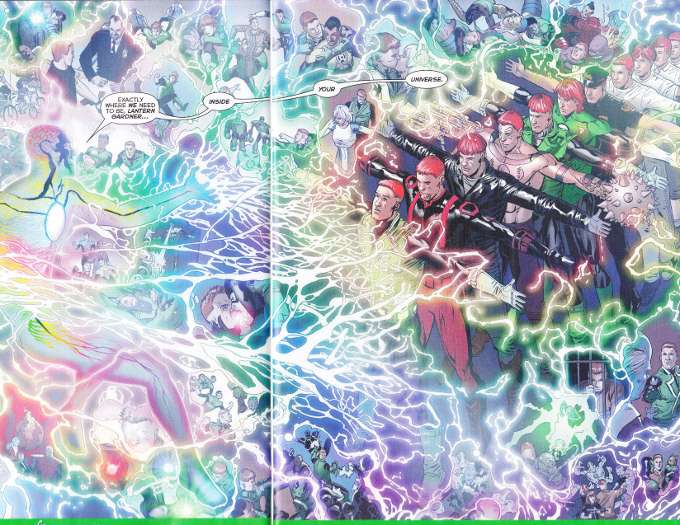 It is this opening splash - and indeed much of what we see in the story of this issue - that brings me to my conundrum.  I think the DC Multiverse as we knew it still exists in some form.  I think this New 52 Universe - and the new Earth 2 - are but two Earths out of the many undefined worlds we saw in recent times.  Why else would we see Guy Gardner with a yellow Sinestro ring or Guy Gardner: Warrior - two incarnations that could not have existed in the New 52 reality, given what we know of the Green Lantern history?  Why else would we see scenes of Guy with Ice, who I don't think he ever became romantically serious with in this reality?

That's a good question isn't it?  And it's one that this issue completely ignores, focusing as it is upon The First Lantern tormenting Guy Gardner with visions of other universes where his already miserable past was even worse.  The reality where his siblings were put in danger and he was unable to save them.  The reality where his failing to kill a suicide bomber led to the deaths of thousands instead of a dozen.  All of these scenes and more are played out to Guy's increasing discomfort as The First Lantern... well, we don't actually know why he's doing this, save that he seems to feed off the emotional responses of others.  That's another good mystery to keep us reading. 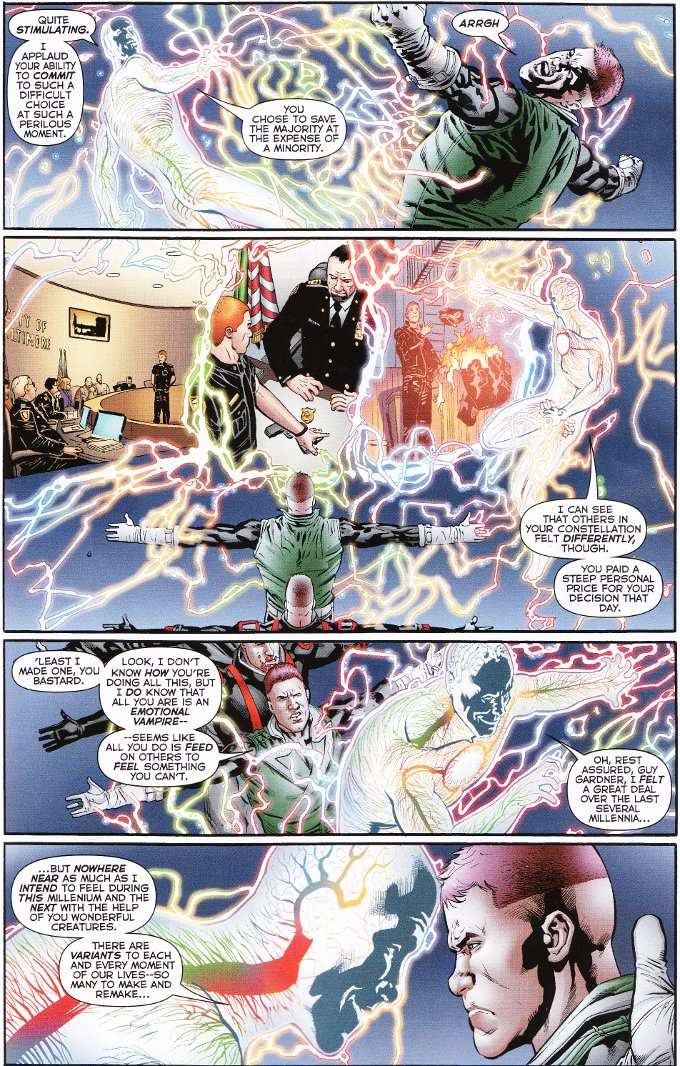 The only problem with all of this is that good as Peter Tomasi is at playing with this kind of drama, this issue does seem somewhat derivative of all the other recent stories which focused upon Guy Gardner suffering.  This issue also doesn't have any connection whatsoever to Green Lantern #17 and the events of that book.  That might be considered a blessing instead of a weakness and indeed I liked how the recent Death of the Family mini-series did not require one to read every single Batman book. The same thing seems to be occurring here, save that there's even less connection between the various Green Lantern family titles than there was during Rise Of The First Army.  One can't help but feel that's a bad thing in a crossover.  Despite this, I still loved this issue and would recommend it to anyone who has yet to give Green Lantern Corps a shot.
Posted by Starman at 8:17 PM