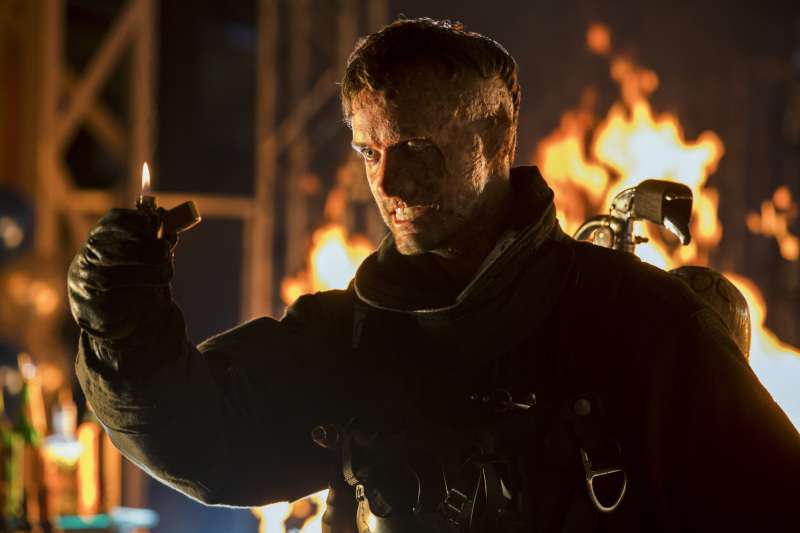 After a string of fire-fighters (including her best friend's brother) are discovered burned to death in the line of duty by fires far hotter than the flames around them, Laurel Lance seeks out The Hood to find help in investigating the deaths when the police and fire departments refuse to investigate.  Just one problem - Oliver Queen is out of the vigilante business.  He says he's focusing on his family and friends in the wake of his step-father's mysterious disappearance but Diggle thinks Ollie's confidence has been shaken in the wake of his battle with The Dark Archer six weeks earlier.  Can Ollie pull it together and find his balance again before another fire-fighter dies?

Green Arrow: Year One (the island sequences), Robinson Crusoe (Ollie's learning survival skills) and every sport movie where the hero regains his lost confidence in time for the big game.

Granting that they already determined there were no prints on it and couldn't glean any information from it, I still can't believe the forensics officer who Detective Lance had examining the phone he got from The Hood would just hand the phone back to him without it being in a plastic evidence bag.  I also can't believe Detective Lance would just leave the phone sitting on his desk afterward. (Maybe he was counting on Laurel pocketing it?)

Why doesn't Firefly throw his fire-bomb directly at the fallen Hood instead of throwing it between him and Ollie, creating a firewall to cover his escape?  (While unconfirmed in the episode, it's suggested that Lynns isn't willing to kill anyone except the men in his company that he thought left him to die.)

How DOES Ollie know that the firefly tattoo was used by eight particular fire-fighters in a disbanded company of the SCFD?

Firefly was originally a man named Garfield Lynns, but this is virtually the only factor all the various versions of Firefly in the comics and other media have in common.  Originally a Batman villain, Lynns first appeared in Detective Comics #152.  In this version he was an out-of-work visual effects expert whose attempted to rob a theater by faking a fire.  Inspired to greater acts of crime after Batman mistook a distant firefly for the light of Lynn's cigarette while chasing him in the dark, Lynns used his talent for illusion and optical effects to confound Batman.

Firefly's origin was revamped slightly following the Crisis on Infinite Earths storyline which rebooted the DC Comics universe.  Now a theatrical pyrotechnician, Lynns' also suffered from severe pyromania and believed special messages were being delivered to him through the flames he made.  Working as an arsonist for hire, he constructed a special suit which not only allowed him to survive intense heat but also gave him the power of flight and an insect-like appearance.  At one point he got caught in one of his own fires and became burned over 90% of his body, much like the version of Firefly we see here.

No version of Firefly, as far as I can tell, has ever been depicted as a former firefighter.

The second fire of the episode is at Stagg Chemicals - the second reference to a company with the name "Stagg" in the series.  The first was a reference to Stagg Enterprises in Legacies(106), which in turn is likely a reference to Simon Stagg - a corrupt businessman and the main villain of the Metamorpho comics.

Reference is made to the Nodell Tower Tragedy.  The name be a reference to Martin Nodell - a classic Golden Age comic book artist, who is credited with the creation of Green Lantern.

The bug Quentin Lance uses to tap the cel-phone that The Hood gave him is a crystal VHF transmitter, hidden in the speaker that cannot be back-traced.

(Ollie tells Diggle to give any leads he has regarding the police )
Diggle: Well, isn't the whole idea of being a vigilante that you do the police's job for them?  You know, Oliver, you've been spending a lot of time around (the Arrow Cave) lately.  I thought after six weeks you'd be anxious to hood up.  Hell, I've even prepared the whole 'You've got to slow down' speech.

Tommy: I was thinking that we could throw a fund-raiser for the fire department.  Raise some money for the families?
Ollie: ... that's a great idea.
Tommy: We could do it here.  Keep the overhead low?  Make sure we maximize the proceeds to the firemen?
Ollie: Who are you?  Where's my friend Tommy Merlyn?  The guy who once rented out a pro football stadium so he could play strip-kickball with models?
Tommy: That guy needed a swift kick in his lazy ass.

Diggle: So Laurel's on her own against a murderer who burns people alive?
Ollie: I can't right every wrong in this city.
Diggle: No, I get that, Oliver.  But maybe you're not back to 100% like you thought.
Ollie: Maybe I'm not
(The two spar, with Diggle pinning Ollie to a desk only for Ollie to reverse the hold and pin him)
Ollie: What did that prove?
Diggle: That this is one sturdy desk.

The whole scene between Thea and Moira about how Thea does know what Moira is going through.

Diggle: So what's next?  More training?
Ollie: No.  We go hunting!

Joanna's LaBeouf impression when she sees the fireman in formal uniform walk in after Detective Lance. ("No, no, no, no...")

Thea's ridiculing Ollie's attempt to pronounce Zack Galifianakis' name.  I can't do it either and I haven't been shipwrecked for five years.

Ollie tries and fails to pin a bouncing tennis ball to the wall, replicating a feat we saw in Pilot (101).  Diggle has connections with Interpol and the FBI.  This episode opens six weeks after Year's End (109).  Joanna has a brother named Danny, who is a firefighter with the SCFD and is Firefly's first victim.  According to the news, The Hood was active for four months before disappearing for six weeks.  Quentin Lance gets back the cel-phone that Oliver gave him as The Hood in Year's End, having passed it to his CSI team to try and learn something about it.  They found no finger prints besides Lance's and the phone was military grade, with totally untraceable parts.  When speaking to Laurel in her apartment, Ollie (as The Hood), refers to the conversation between her and her father at the end of An Innocent Man (104).  Diggle also has a contact - a friend of a friend - in the SCFD investigations department.  Tommy Merlyn is still working on developing a club over Ollie's lair, working the job Ollie gave him in Vendetta (108).  Firefly drives a 1970s model Ford pick-up, has a scar on his right-wrist from a severe burn and a tattoo of a firefly on his right hand.  Ollie also finds out this was a common tattoo among the men in Engine Company 15, though it is unclear how.  Firely makes use of an incendiary grenade in his first fight with The Hood.  Laurel's research reveals that there were eight men in Engine Company 15 and that four of them are dead, with three having been killed in the past few weeks.  The fourth one, who died two years earlier in a fire at the Nodell Tower, was named Garfield Lynns.  Ollie's aim is accurate enough to shoot a moving Zippo lighter at close range.  Moira Queen takes over as Queen Enterprises CEO.  Joanna takes a leave of absence from CNRI and gives Laurel her brother's Fireman's badge as a thank you gift to The Hood.  By the episode's end, we find out that Quentin Lance figured out that Laurel still have the cel-phone The Hood gave him, contrary to what she said earliy about The Hood taking it back.  She gives it back to him but he tells her to keep it, saying that they might need to call The Hood again.  It turns out that Quentin Lance has the phone The Hood gave him bugged so that the next time Laurel calls him, the police will be able to listen in.

In the flashback, we once again see Yao Fei being abducted by Deathstroke and Fyers as in Year's End (109).  Oliver gets into a fight with one of Fyers and Deathstroke's men, fails to jump him with a knife and the two go tumbling over a cliff.  Oliver survives the fall.  The other man does not. Oliver takes his clothes and armor, discovering a map among the gear in the pockets.

A disappointing outing for the show's first episode after a month-long break.  The best bits, as per usual, are the smaller character moments between the supporting cast as they bounce off one another in brief duets and the acting in these scenes is excellent.  A shame then that the actual plot of the episode is the kind of half-assed, villain-of-the-week production I feared Arrow might be when the show was first announced.

The biggest problem is the script lacks the courage to make anyone a true villain.  What happened to Garfield Lynns is tragic but his CO's actions in ordering his men out of the fire were completely justifiable and it was Lynns' own stubbornness that caused his scarring.  At the same time, Lynns is shown to be moral enough not to want to do harm to anyone except the firefighters who he thinks abandoned him, which eliminates most of his menace as a villain, since it is made clear he doesn't want anyone innocent to be hurt by his actions.  Had the script made Lynns' CO out to be a coward who really DID abandon him to the fire, Lynns might be a sympathetic villain if not a threatening one.  Since it doesn't do either, Lynns comes off as something of a lukewarm threat - no pun intended - and it's just as well that he literally rolls over and dies near the episode's end.