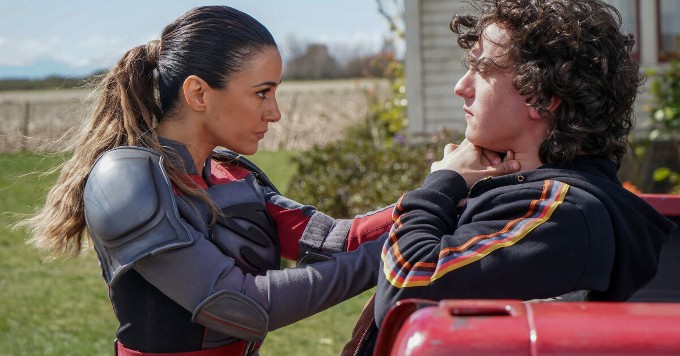 Plot
Strange things begin to occur as Ally Allson's plan to merge Earth-Prime and Bizarro World rolls out. With Superman powerless, John Henry and Natalie Irons throw themselves into the task of understanding how Ally's powers work and finding a way to counter them. Meanwhile, Chrissy and Lois threaten to go public with the truth about the worlds merging, as Lana tries to keep the peace in Metropolis.

Why does merging Earth-Prime and Bizarro World change the sun? Is Ally merging whole dimensions rather than just a single planet?

Tyler Hoechlin gets some of his best Superman speeches ever in this episode.

The fight between Jordan and Natalie against Jon-El and Lana-Rho is fantastic.

John enables something called the Vaporlock Protocol to prevent Natalie from following after him into the space between worlds. In the comics, Vaporlock was one of the codenames used by Natasha Irons as a superhero.

John Henry and Natalie guess that Ally can absorb energy from anything she connects with physically, based on the fact that his suit has no loose wires, no effective diodes and that his shields were up and running and yet somehow she was still able to stop his hammer and drain power from his suit.

The Lara hologram confirms that Clark's cells have been damaged and until they heal it will limit his ability to absorb solar energy at the rate to which he's accustomed.

The DoD cover story for the double sun, also known as a parhelion, is an optical illusion caused by sunlight refracting off atmospheric ice particles.

John Henry determines that the red sun of Bizarro World outputs less than 3% of the total solar radiance of the yellow sun of Earth-Prime. However, that output is growing fast, as the sun phase-shifts into Earth-Prime's dimension.

John Henry and Natalie believe the merging of people is a complete subatomic recombination.

Sam: Clark. Clark. Hey. You gotta stop beatin' yourself up. This isn't on you.
Clark: Look, Sam...
Sam: And the only reason Ally can do this right now is because you stopped her from killing me. If you did anything wrong, it was saving me.
Clark: Saving a life is never a mistake, Sam.

Lois: (To Lana) There have been moments in my life and in my career where I have withheld facts from people because I thought it would protect them more than it would hurt them. Sometimes that was the right thing to do, and sometimes it wasn't. I am telling you all this so that you are armed with the truth. As mayor of this town and all the people in it who you love, it's up to you to decide what to do with it.

Clark: Yeah, and I'm Superman. I'm supposed to keep people safe.
Lois: Okay. Then do that.
Clark: How? What am I supposed to do? I've never been like this.
Lois: You are more than just your powers.
Clark: (sighs) People look to me to save them.
Lois: No, people look to you for hope. That's what Superman does. He inspires. You inspire me and the boys every day, and it's not because you can fly or because you're strong. It's because of your heart.
Clark: I don't want to give people false hope.
Lois: That's not what I'm saying. The world needs you. You're Superman. Be Superman.

Superman: I hope by now you all know me as a friend. It's as a friend that I've come here to assure you that your mayor is telling you the truth about everything, and that does not mean that all is lost. I saw what this town was capable of last year, the way you all protected each other. And I know you can do it again. That's starts by listening to your leader. Because I know she's here for you, not to serve her own interest.

As the episode open, Clark wakes up in a military hospital, where Lois is sitting at his bedside, waiting.

When Clark and Lois return to the Kent farm, Clark is barely able to walk and trips on the porch steps.

According to the Department of Defense, Clark's cells were completely drained of solar energy.

Clark says that he can't feel himself recharging in the sun like he normally does and thinks they have to consult with the hologram of Lara to figure out what is wrong.

Jordan is nervous about trying to fly Clark to the Fortress, noting that he still can't control his landings.

Lois says Jordan doesn't have to fly if he doesn't want to and they can ask John Henry for help instead.

Ally Allston appears on TVs all across Earth-Prime.

Chrissy's computer at the Smallville Sentinel is glitching when Lois comes in to work,

Chrissy wants to report on everything they know about Ally, but Lois is afraid it would start a panic.

As the computer glitches, the text of it suddenly appears to be backwards.

Lara says Clark's cells were altered during the fight with Ally and it may take time for his body to adjust and start absorbing solar energy at the same rate as before.

Clark didn't develop powers until he was four years old.

Clark asks if there is a way to speed up his energy absorption. Lara says there is one but it could kill him before she begins glitching.

Everyone goes outside and sees that a second red sun, shaped like a cube, is overlaying Earth's yellow sun.

Lucy Lane is reportedly working with some DoD analysts, but she only knows what Ally already told the world in her broadcast.

John Henry and Natalie plan to go into the stratosphere and gather data on the red sun.

Lois tells Sam that Chrissy and Lana are having a meeting to discuss what she knows at a town hall meeting in Smallville.

Lois has come around to Chrissy's way of thinking and believes they should be honest with the public.

Lois tells Jordan to listen for trouble and to stay with Jonathan.

The people of Smallville don't believe the DoD story about why there's a second red square sun.

Lana asks Kyle to take the girls and arrange for the firefighters to be at her town hall meeting to help keep the peace.

When Lana asks why Superman doesn't do something, Lois tells her that Superman list his powers.

Lois tells Lana that they are giving this information to her so she can decide what people find out.

Jordan tells Jonathan that he can hear how much weaker Clark's heartbeat is.

Lana-Rho shows up at the Kent farm.

Jordan moves to protect his father, but Lana-Rho is more powerful than him.

Clark tries to surrender to her, but Lana-Rho flees when John Henry and Natalie arrive in their armor.

At this point, John Henry estimates that they have less than 12 hours until the worlds merge.

John Henry decides to go into the space between worlds and confront Ally with every weapon he can, after tracking her energy trail to the mines.

Kyle senses that something has Lana upset but doesn't ask for the details. She asks him if he thinks it is better to know something terrible is going to happen or live in ignorance.

Kyle says that the truth comes out eventually, but you have to be brave enough to tell it when it matters. He admits this is part of why he hid the truth about his affair with Tonya from Lana - it was easier to live the lie and hope he could control how the truth came out.

Lana says she wants to talk to their daughters before the town hall meeting.

Jordan is upset because he wasn't able to fight to protect Clark.

Clark is upset because he's not used to being powerless and unable to help, but Lois tells him he can still help by inspiring people.

Lana reveals the truth about Bizarro World at the town hall and tells people to avoid anyone who is acting strangely or looks like them. She also tells the public about Superman losing his powers.

The crowd turn on Chrissy and Lana after they reveal that Chrissy didn't publish the news before now at Lana's request.

The former mayor tries to turn the people against Lana, saying it is clear she doesn't know what she's doing and this is some desperate ploy to stay in power.

Clark shows up at the town hall as Superman and vouches for everything Lana and Lois and Chrissy say.

Sarah figures out that Jordan knew about the Bizarro World crisis and guesses that is why he was acting so weird and wasn't there for her the past few weeks.

Natalie reinforces John Henry's armor with the X-Kryptonite polymer she created that made her armor stronger than his.

John Henry activates a protocol, Vaporlock, which keeps Natalie from activating her armor until ten minutes after he leaves. He says she needs to stay behind to help protect the Kents, because they are their family in this new Earth.

Jon-El uses a Kryptonite inhaler to boost his powers.

John Henry confronts Ally Allston in the space between worlds, using missiles rather than his hammer. Unfortunately, they have no affect on her and she sends an energy blast back at him that sends him flying, When we last see him, he's flying through space, unconscious.

Sarah seems ready to forgive Jordan, but asks why he didn't just tell her the truth. Jordan says he wanted to but it wasn't his decision and there was something else.

Lana interrupts them before Jordan can tell Sarah about his powers, but then Lana-Rho arrives.

Jordan reveals his powers to Sarah as his eyes glow red, when he tells her and Lana to run.

Jon-El goes after Superman and starts strangling him.

Natalie decides to join the fight against Jon-El rather than go after her father.

Jon-El and Lana-Rho are taken into custody by the DoD.

Sam goes off to manage the crisis management at the DoD.

Natalie tells the Kents that she lost her dad's signal and she's afraid she'll never see him again.

Sarah figures out that Lana knew Jordan had powers and that the reason she disappeared for six hours in 211 had something to do with her finding out his secret.

Sarah is furious with Lana, but before they can discuss what happened, the world changes around them.

The episode ends with the Kent Farmhouse becoming the rundown house on Bizarro World.

The new Fortress of Solitude.

Lana's talk with her daughters about the crisis takes place off camera.

Lois turns into a damsel in distress when Jon-El goes after Superman.

A great episode with an epic cliffhanger heading into the finale.