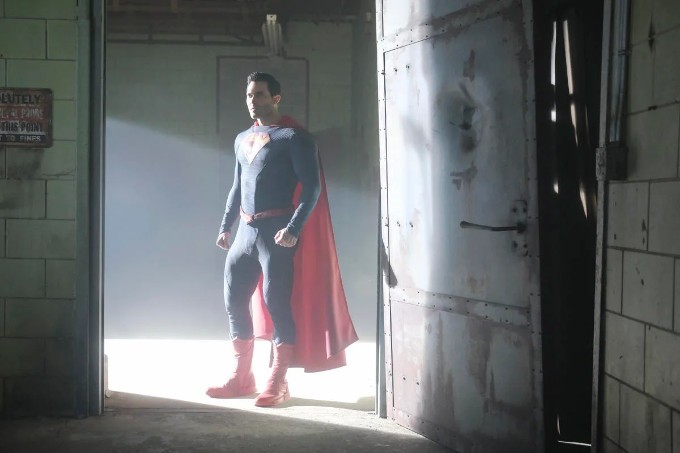 Jon-El's efforts to start paving the way for Ally Allston's invasion lead to a major change in the status quo between Clark and Lana.

Classic Superman comics and the drama and comedy that arose from Superman hiding his secret identity from Lana Lang.

This is another great episode for Tyler Hoechlin, who sells Clark's torment at the pain his secret is causing people.

The final scene is one of the most beautiful in the show's history.

The episode title is a take on an old gameshow, Truth Or Consequences.

In most iterations of the Superman story, Lana Lang was the first person outside of the Kent family to learn about Clark's powers. Superman and Lois is one of the more notable exceptions to this, making this episode's final revelation all the more notable.

This episode establishes that the Arrowverse version of Superman can still use his powers while suffering from Kryptonite poisoning. This is notable as in most Superman comic stories, his powers are completely negated by the presence of Kryptonite. The most notable example of this came in JLA #4, where Superman figured out the green Kryptonite being used to hold him at bay was a telepathic illusion based on the fact that he could hear billions of people suffering in the middle of an alien invasion.

Natalie is revealed to be working on something called the Pasiphae Project. In Greek mythology, Pasiphae was a witch and queen of Crete, who commissioned the inventor Daedalus to fashion an armored cow suit for her so she could mate with the Cretan Bull. She later gave birth to the Minotaur. The implication here seems to be that she is making her own armored suit to help her father, based on the fact that she makes reference to needing a power source.

John Henry describes the process linking doppelganger minds psychically as inter-dimensional kinesthesis. He's not sure he has the means to disrupt it.

Clark finds out that he's been gone for 33 days, but was only in Bizarro World for a day. This suggests that the time flows differently between the two dimensions or in the Negative Zone between rifts.

John Henry's Steel armor is powered by Kryptonite. However, he's been using X-Kryptonite as a power source since allying himself with Superman.

Clark: Why didn't you just tell me those drսg belonged to Candice?
Jonathan: Dad, I thought you said that everything was cool between us.
Clark: It is, Jonathan, but I still want to understand what you were thinking.
Jonathan: Okay, well, clearly I didn't want Candice to get in trouble.
Clark: Well, maybe she should have. She was selling drսgs.
Jonathan: See? That's--that is exactly why I didn't say anything. Because you ask me a question and then you don't even listen to what I have to say.
Clark: No, don't make this about me. I'm the one who was lying.
Jonathan: (chuckles) Are you serious? You lied to me for 14 years about who you actually are.
Lois: No, Jonathan, that is not the same thing.
Jonathan: Yeah, it's worse. Because I lied to protect someone else and he lied to protect his own secret.
Clark: That secret keeps this family safe. It allows you to have a normal life. One that isn't in the shadow of me being Superman.
Jonathan: Okay, well, if that's what the secret's doing, it's doing a pretty crap job.

(John Henry tries to calm Natalie down about the Ally Allston situation.)
John Henry: You cannot spiral out at the worst case scenario.
Natalie: You mean the one where your entire planet gets destroyed and you lose everyone you care about?

(Lana is driving down a country road. Clark is standing in the middle of it. She stops and gets out of her car.)
Lana: Clark. What are you doing here?
Clark: I, um-- I need to talk to you.
Lana: This really isn't a good time.
Clark: Lana, there's... There's something I've... (sighs) Something I've wanted to tell you my entire life.
Lana: How did you even know I was gonna be here? Oh, you know what? It doesn't even matter.
Clark: Lana...
Lana: Clark, listen, I do want to hear what you have to say, but I have had the longest day. You've no idea what I've been through.
Clark: Yeah, yeah, but I do, though, actually.
Lana: What?
Clark: I was there. Lana, I--I-- I was with you.
Lana: What are you talking about?
(Clark sighs and takes off his glasses and levitates off the ground. He uses his ice breath to freeze a tree.)
Lana: (awe-struck) My God... You're Superman.

This episode begins right where the final scenes of 209 and 210 left off.

Jon-El tries to merge with Jonathan, but Clark returns in time to stops him.

Jon-El is much stronger than Jordan.

Jonathan begins to experience visions like Clark had when Bizarro Superman first came to Earth-Prime. He describes the sensation as a "weird brain freeze feeling."

Clark says that Jon-El should start getting weaker on Earth-Prime, like Bizarro did, because the yellow sun drains his strength in the same way a red sun drains him.

Clark makes a point of telling Jonathan that he loves him and always will no matter what before going to talk to John Henry.

Jordan texts Sarah repeatedly, trying to talk to her about the break up.

Lois suggests that Jordan write Sarah a letter to get his feelings out in a clear way instead of sending multiple texts. He decides to try it.

Jon has a vision of Jon-El on the Main Street of Smallville.

Clark goes to confront Jon-El, but runs into Lana. Jon-El makes his escape while Clark tries to make an excuse not to stay and catch-up.

Clark is surprised to learn he's been gone for over a month and that Lois told everyone he was on an assignment.

Lois also didn't have the chance to tell Clark that Lana won the mayoral election and is moving into her new office the next day.

Lois also informs Clark as to Candice being the X-Kryptonite dealer Jonathan was protecting.

Clark isn't happy about Jonathan lying, but he defends his actions saying he was lying to protect someone and pointed out that Clark lied about being Superman to protect his family and it didn't work.

Natalie tries to help John Henry get his suit upgraded.

Lana tells Sarah about how Clark was acting weird when she ran into him the night before.

Sarah says that Jordan was acting the same way, as if he was hiding something and suddenly wanted to be somewhere else.

Sarah packed everything for Lana's office and offers to load them into her car. This leads Lana to surprise Sarah with a car of her own, revealing that Kyle finally got the car they were working on finished and they wanted her to have it.

Jordan shows his letter to Jonathan. He does not discuss what is in it, but is shocked by it.

Jon-El runs into Sarah, who mistakes him for Jonathan. He's rude to her about her car, saying he prefers Lamborghinis.

Jon-El goes after Lana in her house and captures her.

Lois runs into Sarah at her mom's office, Lois wanted to talk to her, but talks to Sarah about Jordan. She doesn't go into detail, but tries to stick up for Jordan and says there's some family stuff going on.

Lois says Sarah is more mature than she was at her age and that she used to date bad boys purely to upset her father. One of them, Dave, was in a Primus cover band.

Sarah has never hard of Primus.

Lois hasn't told Clark about any of the men she dated before him.

Lois tells Clark that she thinks Jon-El went after Lana.

John Henry builds a device he thinks will prevent Jon-El from having headaches while Jon-El is on Earth-Prime but it will require more power than he has handy. This means he will have to go into the Shuster Mines to get some Kryptonite, which is also the source of power for his suit.

Jon-El chains up Lana with one of the pendants.

Sarah leaves the office to go back home and check on Lana.

Jordan is upset that Lois talked to Sarah without checking with him first.

Sarah later goes to Lois to tell her she thinks her mom has been abducted.

Lois promises to help, but sends Sarah back to her mom's office.

Jordan tries to give Sarah the letter he wrote for her, but she refuses to take it, being worried about her mom and in no mood to deal with Jordan's apology.

John Henry and Natalie see the dimensional rift to Bizarro World as they gather the X-Kryptonite.

John Henry says that Clark told him about the portal not going directly to Bizarro world and that there's some kind of Negative Zone between the dimensional rifts leading to the other planets. Natalie says this sounds like the space she was in before she found the way to Earth-Prime.

Clark has started questioning if his secret is worth anything. Lois says it is, but agrees that she felt bad lying to Sarah when her mother was in danger.

Jon has another vision of Jon-El in a place full of bloody meathooks, like a freezer. This is determined to be the old slaughterhouse on Kempsville Road.

Jon-El sets an ambush for Clark, wounding him with Kryptonite shrapnel before stabbing him through the chest with a Kryptonite crystal.

The Bizarro Lana emerges through the rift while Natalie and John Henry are working.

The Bizarro Lana attacks John Henry, who tries attacking her with one of his red sun weapons. This heals her rather than hurting her.

Lana Lang picks the Kryptonite shards out of Superman's chest.

Bizzaro Lana is driven off when Natalie stabs her with an X-Kryptonite crystal.

Jordan confronts Jon-El but is able to fight back this time.

Jordan passes out trying to carry Jon-El closer to the sun, but both are caught by Superman.

Superman takes Lana Lang home but asks her not to talk about Jon-El.

She agrees to keep the secret - for Clark's sake, afraid of how he'd handle the news of an evil version of his son existing.

Clark almost seems ready to tell Lana his secret but decides against it.

Natalie is working on something secret called Project Pasipahe, which needs power source. She thinks X-Kryptonite may be what she needs.

Jon-El is said to have been taken to a Black Ops site and a special cell like the one for Tal-Rho.

Jordan lets Lois read his letter to Sarah. It is revealed that he planned to tell her about his powers.

Clark comes back to the farmhouse and says he wants to tell Lana his secret, but wants the rest of the family to weigh in on the decision. Everyone agrees it is a good idea.

Lana lies to Sara about having saved Superman.

Clark meets Lana out on the road and tells her he has to tell her something.

Lana shoots down hearing Clark's story. In response he takes off his glasses, levitates and freezes a tree.

John Henry really should know better than to use his Red Sun weapons on Bizarro Lana. (It's possible Clark didn't get the chance to explain that aspect of Bizarro World to him.)

A powerful episode, from beginning to end.