Superman and Lois: Season 2, Episode 10 - Bizarros in a Bizarro World 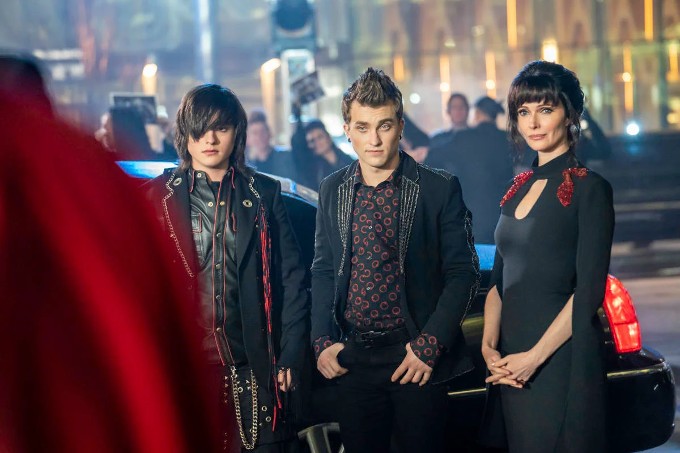 Superman emerges into the Inverse World and finds it quite bizarre. As he tries to navigate his way through a series of familiar faces and work out who is friend and foe, he learns something of just how drastically different he was from the Kal-El of this world.

Difficult as it is to single out any one actor when they all do a great job playing their Bizarro counterparts, I have to give the VIP spot to Tyler Hoechlin, who does a fantastic job playing a radically different version of Superman yet still managing to make him seem like a plausible Kal-El variant for all that.

The special effects used to change the regular sets into Bizarro World are amazing.

The fight between Jon-El, Anderson and Clark is fantastic.

This episode was shot with the cameras reversed so as to make everything look further askew.

The title cards at the beginning of the episode flip so that the Superman logo is reversed. It then changes back during the end title-card sequence, as Superman returns to Earth-Prime.

This is the first episode not to feature Sarah.

This episode reveals that Bizarro Superman's appearance was caused by his addiction to Kryptonite. In the Red Hood and the Outlaws comics, Bizarro went through a similar transformation, though in his case Green Kryptonite temporarily enhanced his intelligence.

Five of the episode's six segments each focus on a different character. In order, the sections are Superman, Bizarro Jonathan-El, Bizarro Lois Lane, Lt. General Mitchell Anderson and Bizarro Tal-Rho.

Jon-El's reference to Bizarro Superman spending more time hanging out with President Seinfeld than with his family is a nod to comedy legend and huge Superman fan Jerry Seinfeld, who starred in series of short films based around his hanging out with Superman.

Superman: You can fly?
Jon-El: (smirking) Do a lot more than that.

Bizarro Superman: I am your father. You do what I tell you to do, you understand?
Jon-El: Oh, so now you wanna be my dad now that I have powers. Where were you before?
Bizarro Superman: Don't you take that tone with me. You know exactly where I was.
Jon-El: Actually, yeah, yeah, I do. Uh, selling your shoe line and hosting the Kevins. Oh, and the trips with President Seinfeld.
Bizarro Superman: I have responsibilities, Jonathan! I thought, by now, you would understand that.
Jon-El: That's the thing, Dad. It's always, always about me understanding you. Maybe, for once in your life, you should think about how I'm feeling.

Anderson: After everything that I've done, you'd still try and save me?
Superman: I've told you before. To me, everyone's worth saving.

The opening scene replicates the opening of 209, with Superman flying into the Inverse Portal.

Superman heals upon exiting the portal, which is in the Shuster Mines of the Bizarro World. The mine there is full of green Kryptonite rather than X-Kryptonite.

The language of Bizzaro World is backwards, but Superman is able to adjust his way of speaking to make himself understood.

Superman finds a dead man named Anderson in a military uniform. He presumes this is Lt. General Anderson from his Earth.

The exhibits of the museum include holograms of the bottle city of Kandor and a model of the giant key once used to lock the Fortress of Solitude.

The Fortress is maintained by a hologram of Lara, instead of Jor-El.

The Jonathan Kent of Bizarro World, Jon-El, shows up. He deactivates the Lara hologram and says they need to take it with them. He suggests they go to the farm in Smallville.

Jon-El tells Superman that Ally took over a lot of the world several months earlier. She's made her base of operations in the Department of Defense.

Jon-El reveals that Bizarro Superman had been using green Kryponite to boost his powers, like Jonathan Kent used X-Kryptonite on Earth.

Bizarro Lois Lane shows up and reveals that Jon-El is a follow of Ally Allston.

A flashback reveals that Jordan-El has straight hair.

Bizarro Superman was a celebrity who reveled in his fame and did endorsement deals, as opposed to the humbler Superman of Earth-Prime.

Jon-El first manifested his powers to save a falling window-washer while attending a red-carpet event with his family. His dad was too distracted by his fans to notice him.

Jon-El's superhero look was created by committee, with a consultant named Deb.

Bizarro Superman is revealed to have bought the Kent farm as a remote hideaway for his family to get away from the celebrity life. The familiar Kent mailbox instead reads El.

Jon-El begins dating an actress named Misty, who introduces him to Ally Allston at a Hollywood party.

Jon-El resents Bizarro Superman for only seeing him as an extension of himself and an heir to his empire. This is an ironic reversal of Earth-Prime, where Jon resents Clark for not paying as much attention to his football career as Jordan's powers.

Jon-El makes reference to an awards show called the Kevins (which his father co-hosted) and his going off on trips with President Seinfeld rather than spend time with him before he got powers.

Reference is made to uprisings in Star City. Ally claims the American government faked those to make her look bad.

Ally is said to have a billion followers before Jon-El joins her.

Bizarro Lois is revealed to have left (with Jordan El) because of Superman's Kryptonite abuse and neglect of their family.

The cars of Bizarro World America are like the British cars of Earth-Prime, with the driver's seat on the right side of the front of the car.

Bizarro Superman burns down the barn on his farm after Lois leaves him, in a fit of anger.

Bizarro General Lane never liked Kal-El and claims to have always supported his daughters in what they wanted to do with their lives. This is the reverse of Earth-Prime, where Sam Lane worked with Superman without issue but was a distant father to his daughters.

Lois notes that people with powers are joining Ally's cult, along with political agitators and ex-military.

The Bizarro version of Lieutenant Reno Rosetti is revealed to be part of Ally's cult as well and helps Jon-El to take control of the Department of Defense.

Bizarro Ally Allston is said to have discovered a portal to another Earth.

Bizarro Superman is revealed to have been using Kryponite to make himself stronger. This is the cause of his chalky skin and emaciated appearance.

Bizarro Superman attacks the Department of Defense after getting high on Kryptonite. This explains the opening sequence from 206.

Jon-El attacks Superman, demanding to know where Anderson is, just before Anderson shows up.

A flashback reveals that Jon-El burned Bizarro Andrerson with his heat vision to keep him from merging with his other self before Ally Allston. This explains the burned corpse in Anderson's uniform that Superman saw earlier in the episode.

In Bizarro World, Chrissy Beppo runs the Daily Smallville Deadline. It is a much bigger paper, with a large staff that includes James Olsen.

Bizarro Chrissy is at work on a story about Lex Luthor when Anderson approaches her.

Bizarro Chrissy has a punky hair-cut.

Anderson cannot make himself understood, but is able to get directions to where Lois Lane is hiding by writing LOIS backwards on a piece of paper.

Anderson tells Jordan that his father is dead. He shows clear remorse when he realizes he killed a hero and not the monster he thought Bizarro Superman was.

Anderson apologizes to Superman and reveals he has both pendants still.

Anderson only has one of the X-Kryptonite inhalers left.

Anderson figures out that Superman was lying to him to protect his family and gives him the pendants.

Bizarro Lana Lang and Bizarro Tal-Rho arrive with both versions of Ally Allston.

The Allys start to merge.

A flashback confirms that, in this world, as stated in 207, Bizarro Tal-Rho and Bizarro Kal-El were best friends and true brothers.

We do not learn the details of Bizarro Tal-Rho's upbringing, but he has a much more positive attitude about living among humans and apparently enjoys the same degree of celebrity as his brother, having been described as an eligible celebrity bachelor in Persons Magazine.

Bizarro Tal-Rho and Bizarro Kal-El celebrated the news that Lois was pregnant in a bar in Smallville, just after Bizarro Superman Kal-El bought the farm to have a quiet place away from the press.

Bizarro Lana Lang was a waitress at the bar in Smallville who flirted with Tal-Rho after he agreed to cover everyone's drinks that night. She later married him.

It is not revealed how Bizarro Lana Lang was given powers, but presumably it involves using Kryptonite.

Bizarro Superman had a cat name Krypto. In the comics, Superman usually has a dog named Krypto.

Tal-Rho joined Ally Allston's cult around the time Bizarro Superman went off the rails with his Kryptonite addiction.

Ally tells Jon-El to go merge with Jonathan Kent and he takes the medallions.

Bizzaro Tal-Rho frees Clark, who flies back to the portal to return to Earth-Prime.

A fantastic episode, that suffers only for feeling a bit rushed in how it tries to explore Bizarro World in an hour. The show might have benefited from having two episodes to explore the setting. Apart from that minor hiccup, however, this is darn near perfect in what it accomplishes.