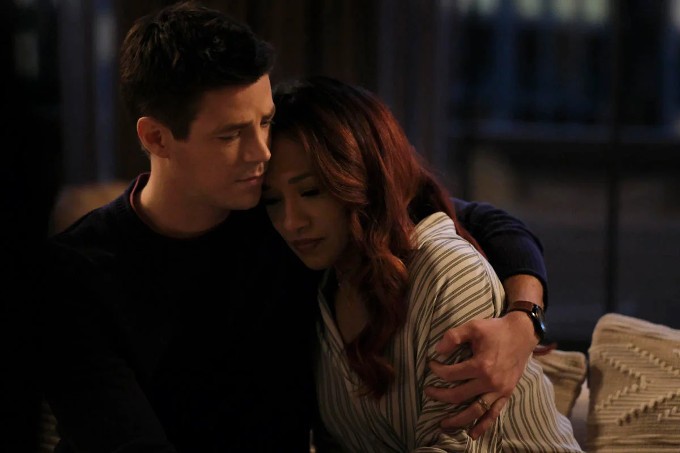 With Deathstorm on the rampage in Central City, Joe comes out of retirement to help coordinate the police response, as Team Flash uses Cecile's empathy powers to try and track the cold-fusion killer.

Iris' sudden reappearance in Central City is perhaps the laziest bit of plot convenience in the show's history, as whatever Phantom Girl did to her is forgotten and never explained.

Deathstorm's motivations suddenly shift from killing the grieving to claiming Caitlin as his bride.

It's pointed out that Deathstorm haunts Allegra for no apparent reason. (If this were like Blackest Night, her light based powers might hold the key to beating him. Unfortunately, this plot point is dropped immediately.)

The "ride the lightning" sequence makes the Speed Force lightsabers from the Season 7 finale look plausible by comparison.

Danielle Panabaker does a great job playing off herself as Frost and Caitlin.

As ridiculous as it is, the effects for the "Ride the Lightning" sequence are well-executed.

The opening monologue by Deathstorm mimics some of Nekron's musings on life being an aberration and wanting to restore the peace of the early universe by killing everyone from Blackest Night.

The Metallica song "Ride The Lightning" is used in the sequence in which Barry chases after Deathstorm by "riding lightning."

According to Iris, all time existence at once in the Still Force, allowing a person to see their past, present and future. However, for some reason, she was unable to see her future.

For some unexplained reason, Deathstorm's transformation changed the nature of his powers enough that Chester can no longer track him by the energy signature of his black flames.

Deon tries using a modified version of the metahuman tracking app to track Iris' movements in time and space.

Chester describes Allegra's powers as a light-based detonation on the electromagnetic spectrum which registers as a category-three spectral discharge.

Barry's gold boots can redirect most energy sources. This include currents equal to the kinetic output created when he run. According to Chester, the force of those two equal energies cancel each other out. but would create a sensation like running into a brick wall. Barry uses this to create lightning platforms he can use to chase after Deathstorm.

After being abducted by Deathstorm, Caitlin's vitals are elevated, her blood pressure is lower, and so is her body temperature. The strangest thing, however, is that her cells are in a constant state of regenesis, as if she's stopped aging normally.

Chester says they can use the Mental Augmentation Chamber (MAC) which saved his life and use it to emit cosmic radiation instead of absorbing trans-dimensional particles (i.e. the material that makes up black holes) in order to turn someone into an anti-Deathstorm.

(Barry laments that he can't really plan against Deathstorm.)
Joe: A long time ago, I met someone who was as unprepared as it gets. Young, inexperienced, thrust into this whole new world that was sink or swim. You know what happened that he didn't see coming next? DeVoe. Zoom. Cicada. Bloodwork. But you're still standing, ain't you?

Frost: Okay, that's it. I am done waiting around for the Bachelor from Hell to come give Caity a rose. We need to find this sicko and end him, before he does anything worse to my sister.

Barry: Time to ride the lightning.

The episode picks up where 811 ended, with Deathstorm seemingly trying to burn Caitlin to death.

The Flash chases Deathstorm off, who flees even though Barry's lightning doesn't seem to effect it.

Caitlin does not have any burns when Barry examines her, despite being engulfed in Black Fire.

Caitlin explains to the rest of the team that Deathstorm is not Ronnie but was created by his death.

The cold fusion sphere is confirmed to be destroyed.

Cecile comes to STAR Labs offering to help, having heard about the attack on Caitlin.

Cecile senses that Barry is truly hurting - more than concern for a friend would cause.

Barry tells Cecile about Iris' disappearance and explains he hadn't told the rest of the team yet because he didn't want to distract them from the Deathstorm problem.

Sue texts Barry and tells him Iris is back.

Barry guesses that Iris' time sickness must have pulled her into the Still Force before Tinya could do whatever she was trying to do to Iris.

Deathstorm kills an old man who was apparently visiting a loved one's grave.

Captain Kramer uses the pager Barry gave her to summon The Flash for the first time since she received it in 807.

Sue stays with Iris while Barry is away.

The police field multiple reports regarding Deathstorm going on a rampage, kidnapping one man's wife and one body being burned but nothing else around the body.

Kramer says that there have been 10 Deathstorm victims in the past five months before getting reports of three more confirmed downtown, another two uptown, and at least four reported on the lower East side of Central City.

Kramer says she is out of her depth dealing with this.

Joe agrees to help Kramer lock down the city and coordinate the protocols needed to keep the police safe. This includes keeping any cops grieving loved ones off the street.

Some of the officers involved in the effort to fight Deathstorm are Korber, Matlin, Martinez, and Howe.

Allegra says there are no media tips regarding Deathstorm on the Central City Citizen hotline.

Barry hits upon the idea of using Cecile to track Deathstorm.

Cecile risks overloading her neural synapses using her powers in this way, but she says she has to risk it given that Deathstorm has killed over a dozen people at this point.

Caitlin tells Frost that she feels guilty, blaming herself for Deathstorm's rise to power.

Deon shows up and introduces himself to Sue.

Iris' headaches are getting worse.

Deon already knows about Tinya's mom. However, he didn't learn about it until after it had become a part of the past, which is now how the Still Force is meant to work.

Iris' illness has apparently infected the Still Force, as near as Deon can figure. This is why his powers are weakening.

Deon says he will look for Renee Wazoo once he has his strength back, but right now it's taking all he can do to keep Iris and himself stable. As it is, he can see the future of everyone except Iris.

Deon suddenly dissipates into a cloud of Still Force particles, the same way that Rene Wazoo did..

Once Cecile is connected to STAR Labs tracking satellites, Chester is able to locate Deathstorm inside of STAR Labs.

Deathstorm speaks through Cecile and threatens to kill everyone if they don't give him Cailin.

only way they all live is if he gets Caitlin

Allegra is confronted by a vision of Ultraviolet in the hall of STAR Labs.

Allegra knocks herself out releasing a Spectral discharge trying to fight the fake Ultraviolet.

They determine this was another Deathstorm illusion, but have no idea why he would be trying to haunt Allegra now.

Sue once crashed a royal wedding in some country and bought the castle, which prevented her from being arrested.

Sue talks Iris through her pain by telling her to fight for her future with Bart, Nora and Barry.

Joe makes mention of  The Thinker, Zoom, Cicada and Bloodwork

The Flash chases Deathstorm to a carnival, Ripley's Wild World, where it burns several people in a crowd.

Deathstorm abandons Caitlin, saying she is not ready yet.

Caitlin says that Deathstorm seems to be trying to change her - not kill her.

Barry noticed that when Deathstorm disappears, there is portal and the space behind it resembles the place he saw in 601 when Chester's consciousness became trapped in a singularity.

Frost volunteers to be turned into an Anti-Deathstorm with the MAC.

The final scene shows something seeming to stalk Iris and Sue outside Iris and Barry's apartment. This is revealed to be Eddie Thawne, apparently alive and well. It is unclear if this is a Deathstroke illusion or a side-effect of Iris' time sickness.

Captain Kramer is made to look completely incompetent. Granting, that's a completely fair assessment given the way the character was hired into a job for which she had no qualifications, she has a breakdown only to allow Joe to come in and save the day.

An utterly nonsensical episode, even ignoring all the technobabble.