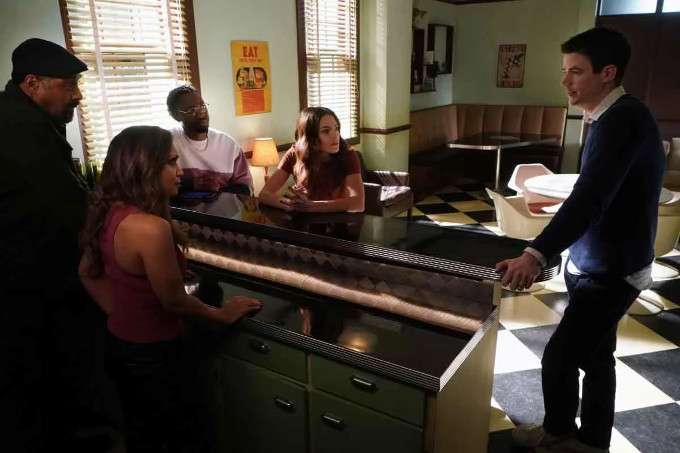 When the Cold-Fusion Killer targets Frost in her own apartment, she begins planning how to use herself as bait to trap them, despite Barry and Caitlin's objection. At the same time, Iris' efforts to help Tinya find her birth mother cause more harm than good.

Doctor Who (technobabble regarding Iris' time sickness) and Legion of Superheroes comics (character of Phantom Girl).

Caitlin is said to be on vacation with her boyfriend in the Wine Country, but returns when she hears about Frost's injuries. It is implied that Barry brought her back to Central City, yet at the end of the episode Caitlin goes to call her boyfriend to tell him what is going on, saying that "He has no idea what happened today" and she hasn't told him about working with The Flash yet. So did Caitlin just leave her boyfriend on the other side of the country with no excuse?

Cold fusion, it should be noted, is not cold. It is cold in that it can occur at temperatures below that found inside a star. It is certainly not "like frostbite, only a thousand times more lethal."

Danielle Panabaker does a great job playing against herself as Caitlin and Frost. She also gets a great silent acting moment, as Frost, hugging her mother for the first time... looking uncomfortable but slowly settling into it.

The black fire effects are more convincing this week.

Deon claims that the temporal mutations he's been tracking are all coming from Iris.

Deon says that he had been treating Iris' condition like a virus giving her symptoms but now it seems that she is the cause of the time fractures forming around her.

An SR37 Alert on the Team Flash warning app is a break-in at STAR Labs' medical lab.

Dr. Tannhauser theorizes that the Black Fire is targeting Frost because her powers are cryokinetic, like the fire.

Chester suggests using the fusion sphere from the Artificial Speed Force to speed up the process.

At one point Chester has to compensate for the possibility of a reconfiguration flip at the subatomic level while getting the fusion sphere set up.

Dr. Tannhauser suggests that two cryokinetic signatures could create a signal too enticing for the Black Fire to resist.

Dr. Tannhauser scanned herself for residual meta-genome signatures in her body, determining that a latent cryogene had been activated.

After the second attempt, Chester says that with a strong enough signal the sphere could work without someone's cryo-kinetic RNA in close proximity. This means there is no need to use anyone as bait.

Joe: Sometimes, the hardest part about being a leader is letting go and trusting the ones you've trained to make the call themselves.

Frost: Right now I kinda feel like the stupid person in the horror movie who runs into the house instead of running away from it.

This episode picks up right where 809 ended, with Deon talking to Iris about her time sickness.

Deon and Iris figure out that her increasing instability is due to her asking Deon to reverse her treatments in 803. (Curiously, Deon has no memory of this, despite his power.)

Deon says Iris needs to stay in Coast City for the time being to stabilize, but she should be able to move around the city without issue.

Barry offers to stay with Iris, but she insists he needs to return to Coast City and deal with the Cold-Fusion Killer - now called Black Fire.

Frost is attacked by black fire in her apartment, while working on a new art piece.

The black fire's heat is so intense it can make Frost sweat and it burns her trying to touch her.

Joe, Cecile, Barry, Chester and Allegra discuss what they've found, affirming that all the Black Fire victims so far, except Chester, were suffering from depression.

Parker DeStefano, the yoga instructor who was the Cold-Fusion Killer's third victim, is revealed to have been going through grief counseling following the death of her fiancée and to have started dating again before her death.

Allegra has Vanya and Aariz at the Central City Citizen researching the other victims looking for common links.

Joe and Cecile go through all the files Captain Kramer gave them regarding suspicious fires that might be related to the Cold-Fusion Killer dating back to 2013.

Barry finds Frost breaking into the medical lab at STAR Labs, trying to treat her burn herself.

Caitlin is said to be on a wine country tour with her new boyfriend.

Frost says she isn't grieving anyone, so she can't think of why the Black Fire targeted her.

Frost meets with her mother, Dr. Carla Tannhauser, and asks for her help in trapping the Black Fire.

Frost plans to use herself as bait, while Dr. Tannhauser builds something to trap the Black Fire.

Barry doesn't want to risk Frost's life, saying it is too risky to use her as bait.

Frost asks Barry if he really believes Iris isn't risking her life right now and asks how that is different than her doing the same.

Dr. Carla Tannhauser is said to be the world's top specialist in cold fusion.

Carla offers Chester a job, impressed with his work on the trap. He declines, saying he likes working at STAR Labs too much, even though the pay would be better.

The Black Fire senses a trap and knocks Frost out.

Barry gets Caitlin to return to STAR Labs to treat Frost. She is furious Frost is risking her life.

Iris and Sue take Tinya to the agency that handled her adoption. Unfortunately, there's a no-contact rule that prevents them from giving Tinya any information on her birth mother. Only their board of directors could override it.

Sue's uncle Leroy is the chairman of the board of directors for the adoption agency and is also an orphan himself. One phone call gets him to override the no-contract rule.

After Iris, Sue and Tinya leave, all the furniture in the waiting room of the adoption agency blinks out of existence.

Tinya wonders if her mom is even going to want to meet her. Iris reassures her by talking about her making peace with own mother during Season 2.

Frost's stabbing herself to catch Chillblaine in 707 is held up as proof of her reckless behavior.

Caitlin accuses her mother as seeing Frost as a science experiment instead of a daughter and threatens to abandon her mother if Frost dies.

Barry tells Joe he still thinks Frost's plan is too dangerous, but Joe suggests he's really worried about Iris and that sometimes, when you're a leader, you have to trust your followers.

Dr. Tannhauser thinks Caitlin had a point and tells Frost, frankly, she needs to be more of a mother to her. This includes straight talk about her needing to stop being reckless.

Dr. Tannhauser says that Frost is just like her father, who would do anything to protect his loved ones.

Dr. Tannhauser reveals that her cryokinetic metagene was activated after the events of 519. She hasn't manifested powers yet, but has the potential to do so.

Caitlin is not happy about risking her mother and sister, but agrees to help check their plan.

The Black Fire is released after Dr. Tannhauser has a cardiac arrest while in the middle of trapping it.

Joe and Cecile found nothing in the records of all the old fires.

Barry and Chester are confident they can now use the trap to catch the Black Fire without using Frost as bait.

Dr. Tannhauser stays with Caitlin and Frost for the night.

Dr. Tannhauser tells Frost that she loves her and hugs her for the first time.

Renee reveals that she was an unwed 16 year old when she got pregnant and she wanted to keep Tinya, but her parents were furious and insisted she put the baby up for adoption.

Renee says that giving up Tinya was the biggest regret of her life, which was spent moving from crummy retail job to crummy retail job. She said the only thing that kept her going was the thought that her daughter might have had a better life with a loving family.

Iris has a seizure and Renee tries to comfort her. Shortly after that, she disintegrates into a cloud of still force particles.

A filler episode, apart from the final two minutes. It is tolerable, however, because of the focus on Frost and the Phantom Girl storyline being limited to two scenes.