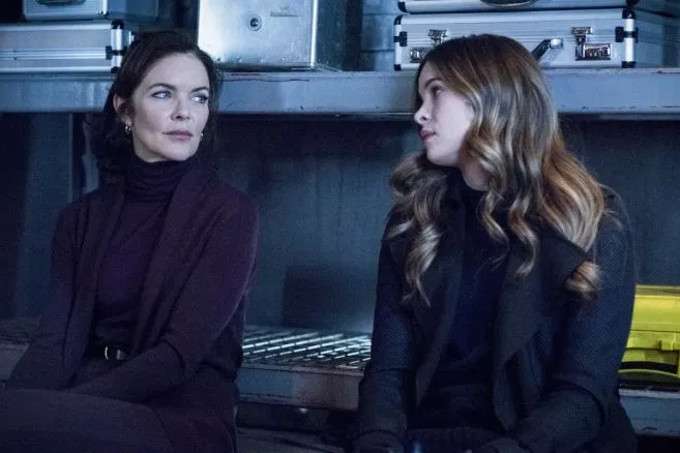 With Barry having stranded Nora in the future without consulting her, Iris takes matters into her own hands to retrieve her daughter using Eobard Thawne's time machine. Meanwhile, Caitlin must join forces with her estranged mother when her father, still dominated by his Icicle persona, returns to enact the next stage of his demented plan.

The Flash comics of Geoff Johns.

Caitlin says she knows nothing about electrical engineering, yet she designed and constructed the delivery system for the metahuman cure earlier in Season 5. (Really, though, it did make more sense for Cisco to do that and for her to develop the cure...)

Harltley Sawyer delivers a powerful performance here. While he's mostly stuck being comic relief, Sawyer has nailed Ralph when it comes time to get serious, such as his telling off Sherloque and his confronting Iris in this episode. One wishes we got more scenes like this and less of him plastering himself to the inside of the Timesphere.

The episode title may be a tribute to the supervillain group Mud Pack, which was made up of all four villains at the time who used the name Clayface.

Originally, the Negative Speed Force consumed any speedster it came into contact with and ate away at the Speed Force like a cancer. Following the New 52 revamp, it acted more as a dark mirror of The Speed Force, similar to the Dark Side and Light Side of The Force in Star Wars.

Much as Barry created the Speed Force in the comics and refuels it with every step he takes, so too did Eobard Thawne create the Negative Speed Force and empower it with his motions.

A Negative Speedster has most of the same powers that a regular Speed Force user has, including super-speed, accelerated healing, enhanced perception and mental processing, lighting generation, phasing and time/dimensional travel. However, most of these powers have a destructive flip-side to them. A Negative Speedster, for instance, must take care not to disintegrate what they phase through, as they generally make matter explosive when they pass through it.

The aura of a Negative Speedster protects them against more than friction and high-velocity wind-burn. It also vaporizes incoming projectiles. Their auras build up energy over time, however, and will eventually explode in order to release pent-up energy. Naturally this energy does not hurt the Negative Speedster.

The lightning of a Negative Speedster tends to be tinted red, black or purple. Their lightning does not follow the laws of physics in regards to energy output and does not act like normal electricity, causing objects to explode upon contact.

A Speed Force user exposed to the Negative Speed Force experiences great pain and may be rendered unable to use certain powers for a time.

Judging by the thermal warping of the glass in Grace Gibbon's hospital room, Barry determines that an energy blast with a lot of heat broke the window. Of course he also points out it doesn't take a CSI to guess Cicada was responsible for abducting her younger self.

The prototype Cryo-Atomizer Icicle steals from Dr. Tannhauser was kept in a docking station lined with a carbon-filled Kapton polymide. This is the same material NASA uses to build probes meant for the coldest reaches of space.

The Cryo-Atomizer has the ability to disperse particles which slow down atoms' molecular motion into the atmosphere. Combined with Icicle's powers, he could use it to plunge Central City into a new Ice Age.

The Cryo-Atomizer can also be used to recreate the process that created Icicle and Killer Frost.

It is sais that the nano-cryoparticles inside the atomizer can be tracked by reprogramming an oscillating inversion scanner. Dr. Tannhauser suggests they use a modified field array instead.

Sherloque saves Barry's life by using the live wires in a piece of heavy-duty lab equipment to generate a current that heats up the copper wiring of his suit's circuitry and heat it up enough to warm Barry and let his speed-healing kick in.

Barry is able to remove Dr. Tannhauser from the Icicle's machine by phasing while holding a lightning bolt. This enables him to create an electronic bridge that gives him the heat he needs to survive a near Absolute Zero environment.

Caitlin develops an endothermic litmus test to determine if a person has Metahuman DNA or not. If they do, it creates a stoichiometric reaction that turns a green fluid white.

Iris: That's how you feel, Barry. (sighs) What about asking how I feel?
Barry: I didn't think I had to!
Iris: Of course you didn't. Of course you didn't, Barry! You always see one way through a problem and damn what I think.
Barry: Wait, wait, what the hell does that mean?
Iris: You know, we have been through so much crap, we have been through so much therapy and you are still still making decisions based on your emotions!
Barry: 'Cause I'm right this time!
Iris: (incredulous) Flashpoint? Going to the Speed Force and leaving me? Were you right those times too?

Barry: You know, if this were anybody else, you'd back me. But because it's Nora, because it's our daughter, the person who finally stopped hating you, you refuse to see how dangerous this is. I mean, you talk about making decisions based on emotion? Look in the mirror.

Thawne: I used to idolize your father. I wanted to be just like him. But that was not my fate. I was to be the reverse. Opposite of him in every way. So instead of tapping into the Speed Force to access my powers, I created my own.
Nora: You created your own Speed Force?
Thawne: Yes, I did.
Nora: And I can access it to go back in time?
Thawne: That and more.
Nora: Can you teach me how to use it?
Thawne: Well, I... I have to warn you, Nora... It's a little bit negative.

Sherloque: I can deduce from your faces that you're upset, but you understand the truth need to be exposed?
Ralph: Yes, we understand that.What you don't understand is that this is a family. You didn't include anyone in this.

Dr. Tannhauser: Your father is trapped inside an ice monster, Caitlyn. What was I supposed to do? Split custody with him on the weekends?
Caitlin: I don't know. You could try telling me the truth. But why tell your daughter anything?
Dr. Tannhauser: Funny, I don't recall you telling me that you let the monster out of the prison.
Caitlin: Because you never told me he was in a prison! And now all these years that I could've been working on a cure for dad are gone! We may never get him back.
Dr. Tannhauser: (sarcastic) Well, at least you have someone to blame. Moms are always here for that.

(Iris is in the Time Vault, plotting to steal the Time Sphere. She turns around and Ralph is there.)
Ralph: Planning a trip?
Iris: How did you get in here?
Ralph: Followed you then stretched under the door. By the way, was anybody ever gonna tell me about this secret room? What else do we got in here? A bowling alley or something?
Iris: Ralph, I don't have time for this.
Ralph: Actually, it looks like you have all the time in the world.
Iris: You're not gonna stop me.
Ralph: Who said anything about stopping you?

(Caitlin and her mother are arguing over what equipment they should use to track Icicle.)
Barry: I'll get both. Might take my time.
Joe: (desperately) You need help?
Barry: No.

Nora: I did everything exactly like you told me! How come I can't do this?
Thawne: Listen, not harboring enough rage to fuel your trip is not something to be ashamed of. You're just like your father.Your light is your greatest strength.

Thawne: She's gone.
Iris: What the hell do you mean she's gone? Gone where?
Thawne: I don't know where. I only know when. 2019.
Iris: When Nora said you showed her a way back she meant your way.
Thawne:Yes. And I made a mistake. She wanted to go home, I tried to help her. But listen, Iris, you have to find her. She needs her family.
Iris: And that family does not include you.
Thawne: But it does include Barry. She needs you both united.
Iris: (angrily) I'm only going to say this once. You don't get to comment on us. You stay the hell out of our business or you won't even make it to the end of that timer.
Thawne: I like your anger, but don't let it drive Barry away. The only way for you to help Nora is by doing it as a family. Otherwise, you're simply leaving Barry the exact same way he left Nora.

Barry and Iris fight over whether or not Barry should have dragged Nora to the future without giving Iris a chance to say goodbye.

Iris makes reference to Flashpoint (301) and Barry going into The Speed Force (323) in pointing out how Barry let's his emotions govern his decision-making.

Thawne confirms that he created a Negative Speed Force to empower himself.

Cisco is on Earth-47, asking Breacher for advice on tracking the new Cicada.

Cecile is watching after Jenna. Ralph says he will join her later at Joe's house to go through every file they have on the new Cicada.

Cicada kidnapped her younger self from the hospital. Thankfully, her coma was stable, so she should be fine so long as Cicada takes care of her.

Sherloque is about to leave for another Earth when the alarms at STAR Labs regarding Barry's vitals in his Flash costume go off.

Sherloque elects to save Barry rather than just leaving.

Caitlin says that neither she or her mom know anything about electrical engineering.

Snow Pack was Thomas Snow's pet name for his family.

It is revealed that Icicle's plan is to use the Cryo-Atomizer to change Dr. Tannhauser and give her an ice persona, creating an ice family for himself.

Iris confronts Nora at Thawne's cell. The fact that she came without Barry gives Nora the anger she needs to tap the Negative Speed Force.

Thawne says he can feel Nora in the Negative Speed Force but only knows she is going to 2019.

Caitlin is able to free herself by tricking Icicle into freezing the meta-control cuffs she is wearing.

Caitlin fights Cicada and loses. She is saved only by her father throwing himself in between Cicada and Caitlin as Cicada throws a knife.

Caitlin conducts a test to determine if her mother has metahuman powers. Though it initially comes up negative, it changes to a positive shortly after everyone leaves the room.

Barry admits he made a mistake about Nora.

Iris says that she honestly believes Thawne cares for Nora.

Cisco goes to visit Breacher, who retired to ranch dragons on Earth 47 in 419.

A mostly-harmless filler episode that rushes the story of Caitlin's dad to a conclusion after not being touched for nearly two-thirds of the season. Cicada kidnapping herself is treated as an afterthought and most of the run-time is devoted to Iris' shaggy-dog time-travel story. At least this section has the benefit of being well-acted, but Danielle Panabaker is largely wasted in what should be a major episode for her character. Instead, she too feels like an afterthought and there's no punch to her father's death or her mother being revealed as a metahuman.
Posted by Starman at 11:18 AM