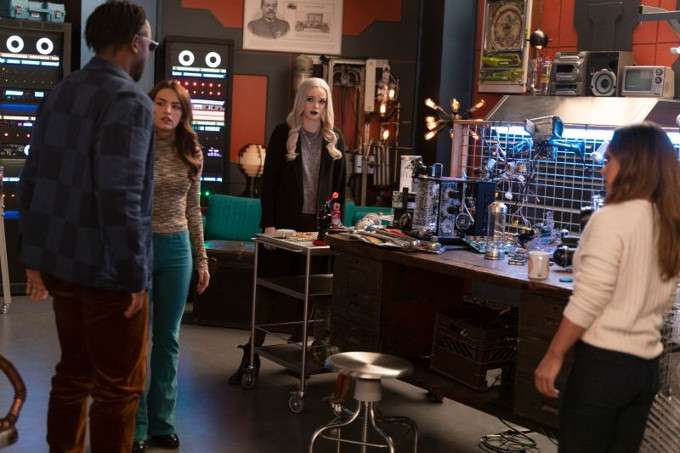 Iris follows a story to Coast City, as the rest of Team Flash focuses on the mystery of a fire-wielding serial killer.

Legion of Super-Heroes (character of Phantom Girl), X-Men (Tinya seems more like Kitty Pryde than her comic book countpart, particularly with her power to short out electronics) and It. (a serial killer with monstrous powers who feeds on fear.)

Deon's demand that Iris not tell her family about her worsening time illness is idiotic and a prime example of the kind of random decision to keep secrets needlessly that has made the later seasons of The Flash painful to watch.

Where is Ralph Dibny in all this? Sue says the Black Hole has finally been defeated so what happened to her partner in crime fighting?

Iris tracks the Coast City Phantom using a metahuman tracking app that measures the ambient levels of dark matter tied to the meta using their powers. However, as has been shown in earlier episodes (as in the case of Frost and her father) that only works with metahumans created by the STAR Labs particle accelerator explosion. Given Tinya is implied to be a Coast City native, the app shouldn't have worked for her. (It's possible Tinya lived in Central City eight years ago.)

Iris' decision to try and drag Tinya into the limelight seems really exploitative, even ignoring her age and the fact that Tinya has no desire to be a superhero.

Natalie Dreyfuss is a delight, as always, as Sue. Her interactions with Candice Patton as Iris are the high point of the episode, primarily because it's the most convincing friendship with another woman Iris has had on the show with someone who isn't a work friend of Barry or a subordinate at her work.

The special effects for the black fire are generally good.

A billboard in Coast City advertises Ferris Air. This is the employer of both Carol Ferris (aka Star Sapphire) and Hal Jordan (Green Lantern) in the comics.

This episode introduces the Arrowverse version of Phantom Girl, aka The Coast City Phantom (CCP). She is revealed to be a teen runaway named Tinya, who is trying to find her mother, who was a barista at the CC Jitters in Coast City, California.

In the comics, Phantom Girl first appeared in Action Comics #276 in May 1961 and was created by Superman co-creator Jerry Siegel and artist Jim Mooney. A native of the planet Bgztl, Tinya Wazzo had the power to phase through solid matter, which was innate to her people due to Bgztl existing partly in the fourth dimension. She joined the Legion of Super Heroes and also used the codename Apparition.

The Cold Fusion Killer's fire powers are cryokinetic, meaning that their power output is detected as extreme cold pockets.

Chester is able to trap a sample of the Cold Fusion Killer's black fire using a micro-catalyzed containment unit. He and Ray Palmer designed the device together as part of the foundation Ray started in 801.An an 8-inch vacuum-sealed borosilicate canister with an ionic-fused base and cap, it preserves the vaporized integrity of gases.

Chester hopes to analyze the black fire and, after learning its molecular properties, reprogram the STAR Labs satellites to seek out the source.

STAR Labs' fire suppression system detects carbon dioxide. As such, it does nothing to try and stop the cold fusion fires, which do not generate carbon dioxide like normal flames.

Sue bluffs Tinya with a molecular destabilizing matrix she claims can knock out any metahuman in a three block radius by destabilizing their powers. (It's actually a paper weight.)

The cold fusion fires start in a subzero state, but they still give off high levels of kinetic energy, which is what allows it to burn people despite a lack of measurable heat.

Chester begins searching STAR Labs for cold catalyzed reactions by tracking muon-catalyzed heat signatures. He determines that the cold flames are converging on the Speed Lab.

(Sue threatens to hurt Tinya with an exotic weapon.)
Tinya: Yeah, I thought you two helped people?
Sue: (gesturing to Iris) Oh, she does. Me, it depends on my mood.

Deon, the Still Force avatar, agrees to give Iris a check-up even tough she's been stable for months.

Iris tells Deon about the lost time she experienced in 808.

Iris has vague memories of her meeting with Deon in 803, but neither one of them remember the incident.

Deon still has no idea how someone gets a time sickness, but he plans to look into it.

Deon detects mutations in Iris' aura which may be a result of his treatment. He promises to look into that as well, but asks Iris not to tell anyone until he knows for sure what is going on.

Joe takes some of the evidence from Barry's investigation into the Cold Fusion Killer to look into on his own.

Caitlin is said to have gone on a spontaneous getaway vacation with Marcus to see Dear Evan Hansen in Metropolis.

According to Frost, Caitlin and Marcus have becoming nauseatingly weepy watching musicals together at home.

Sue Dearbon is in town, making her first appearance since 714.

Sue says she's on a tour of her family's companies, having taken over management in the wake of her parents being sent to prison and the destruction of the Black Hole syndicate.

Sue is going to Coast City to inspect part of a line of luxury hotels she owns, but is hoping to see the Coast City Phantom.

The Coast City Phantom (or CCP) is reportedly the first metahuman to ever be reported in Coast City.

Sue invites Iris to come with her and look for the Phantom.

Chester detects a cold spot at 138 South Devon Road, but the Cold Fusion Killer is gone before he can get there. The location is a yoga studio.

The third victim of the Cold Fusion Killer was a yoga instructor named Parker DeStefano.

Iris and Sue search around downtown Coast City, as that's where most of the sightings of the Phantom took place.

Sue guesses that Iris wanted an excuse to get out of town and asks about how her relationship with Barry is. Iris changes the subject, having used the meta-tracking app on her phone to find a ping on the Phantom.

The app leads Sue and Iris to a teenage girl named Tinya in a CC Jitters, who is not interested in talking to them.

Sue observes Tinya placing something through her backpack.

Tinya is able to short out Iris' phone by phasing a fingertip through it.

Chester falls asleep while working in the lab and dreams that he hears voices before the black fire grows out of control.

Frost notes that Chester is the most touchy-feely person she knows and he is clearly upset about something and hiding it.

Allegra volunteers to try and get Chester to open up.

Sue tries to download Chester's app, but with her substandard data plan it will take over seven hours.

Iris says they don't need to track Tinya. They just have to research her.

Iris opens up to Sue about her illness and the mutations.

Sue says she was in the same place Iris is after finding out about her parents, but advises her that you can't run from a problem like that.

Iris realizes that Tinya may be on the run as well.

As Allegra is talking with Chester, black flames fill his lab, like in his nightmare.

Barry puts out the flames.

Chester reprograms the satellites again to include the interior of STAR Labs, which is why the alarms didn't go off.

Barry realizes the Cold Fusion Killer must be projecting the flames remotely. This leads him to search the city until he finds where they are hiding.

Sue and Iris ambush Tinya as she's going into an apartment.

Iris reveals that she found out who Tinya is by searching the database of missing people in Coast City. This led her to discover that she was a runway who was in foster care.

Iris and Sue agree to help Tinya find her missing birth mother, who was a barista at the CC Jitters where Iris and Sue first found Tinya.

Chester tells Allegra about his father died in a car fire 24 years ago and how he's been afraid of fire and corpses burned to death ever since.

Chester says he thinks the killer is his father's ghost, because he's started having visions of his father's death.

Allegra says there is no way Chester's father, who he said was a loving man, would ever become a vengeful ghost.

Cecile claims to feel the pain of thousands of people, maybe more, radiating from the black fires.

The black flames manifest an illusion of Chester's father, which tries to take his hand so they can join togehter.

Cecile claims that whatever intelligence is behind the illusion feeds on grief.

Chester is able to drive away the killer by affirming that his father would be proud of him and what he does every day.

Joe determines that all three of the Cold Fusion Killer's victims were also suffering from depression following bad circumstances.

Stan Mullen, the bar manager, lost all his belongings to foreclosure.

Donna Winters, the waitress, lost her sister a week before her death.

Parker DeStefano had just lost her fiancé and childhood sweetheart to cancer.

Cecile says it is almost like the black fire itself was sentient, as she felt passion, desire and determination from the flames.

Barry concludes that the flames must be alive.

Iris decides to stay in Coast City for a while longer to help Tinya.

Deon appears to Iris and says he figured out what is wrong with her and it is not good news.

Sue Dearbon claims to have encountered a number of metahumans while she was traveling around the world fighting the Black Hole.

Whatever Iris and Sue do to figure out who Tinya is.

One wonders if Deon really knows what he is doing in regards to treating Iris' time illness since he isn't even sure how someone catches one.

Passable, largely because of the mystery of the Cold Fusion Killer, if not the actual horror show built around him. My money is that it's the Flame of Py'tar, now free to rage without Despero controlling it. In any case, the show continues to tease stories that are far more interesting than what is shown on camera and I think most fans would rather see more of Sue traveling the world and meeting other metahumans than the adventures of Team Citizen.