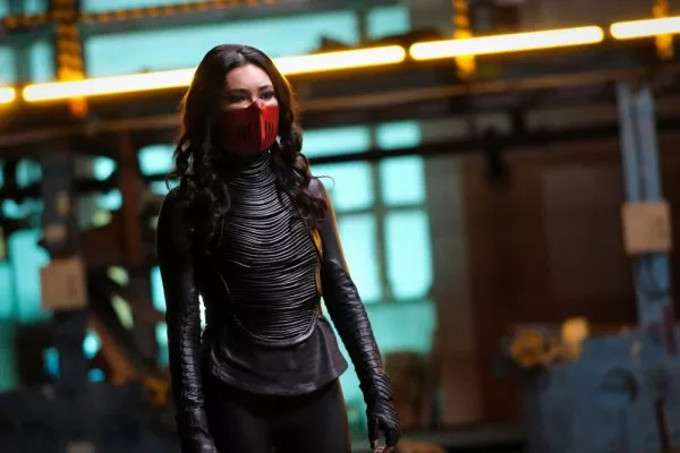 When Ultraviolet returns to Central City, Allegra becomes determined to redeem her wayward cousin. Meanwhile, Joe pursues his new lead that Kristen Kramer might not be what she claims.

Allegra's map shows Metropolis being in New York, presumably close to, or in place of, New York City. This contradicts what has been shown in Superman and Lois, which suggested Smallville, Kansas was only a few hours drive from Metropolis and in the same state division for high school football.

Despite only being the Interim Captain of the CCPD, Kramer already has a name plate on her desk reading "Captain Kramer."

Again, Natalie Dreyfuss is a delight and it's so good to have the show bring her back.

The episode title translates to "Ray of Light" in Spanish.

This episode was directed by Danielle Panabaker. This is her third time directing an episode of The Flash.

This is the first episode not to feature Candice Patton, except in archival footage for flashbacks.

The map of Ultraviolet's recent crimes which Allegra chows Chester places Opal City in southeastern Illinois. This is the first time the location of Opal City on Earth-Prime has been confirmed. The same map shows Metropolis is in New York state and Central City is in western Missouri.

After nearly being blasted by Ultraviolet, Allegra comments that Chester almost wound up with a hole through his body. This literally happened in the comics, where a lab accident transformed Chester into what was essentially a sentient black hole.

At one point Chester evokes the name of Rao, the Kryptonian sun god. ("Great Rao!")

Chester says it's impossible to track where Ultraviolet is based on her energy signature since she radiates pure light and light is pretty much everywhere. However, he is later able to track her by measuring Allegra's powers and using them as an input signal. With that done, the satellites will search for its counterpart signal.

Sue has a photonic stun grenade, which neutralizes the powers of metahumans with light powers.

The STAR Labs van can generate an EMP. However, the van only holds enough power for a single pulse.

Sue is able to take on all the guards using a taser line weapon reminiscent of the Widow's Bite.

(Sue describes how her parents willingly worked for Black Hole.)
Sue: Carver bought my parents' loyalty for billions. And once they got a taste, they needed more. And what happened, once Carver was gone? My parents were in too deep. And worse, they got used to this lifestyle. And no matter how hard I tried, I could not pull them out. Because they didn't want out.
Allegra: Which is why you have to pull with everything you have. When I first met Team Flash, it was in handcuffs. When they first met you, you were robbing a bank. We didn't want help either, but this team never gave up on us.

The entirety of Allegra's "Care Bear Stare" scene using the power of love to save the day, complete with glowing heart.

Barry and Iris plan to leave for a day to take a vacation at a secluded island somewhere in the middle of the Indian Ocean. Barry says they'll be completely off the grid, since the phone service and Wi-Fi are spotty.

Barry credits Chester with the idea of him and Iris going away, referencing the incident in the Starchives from 713.
Frost says she hasn't heard anything about any villains being on the loose, so as far as she's concerned they can take the day off from superhero business.

Chester invites Frost to join his Dungeons and Dragons game, but she declines, saying she has some personal business to attend to. When asked if she needs help, she says she's going to be shopping.

Chester then asks Allegra if she'd like to join his game, but she says she has a news tip she has to check up on. This involves a picture of Ultraviolet that was sent to her, along with the texter asking if that's the metahuman assassin Allegra was looking for.

Joe took a recorded statement from a soldier who claims to have seen Kristen Kramer arguing with a man named Adam Creyke at a café near the base on the day before her squad was killed 6 years earlier. To make matters worse, Creyke was apparently telling her to 'stick to the plan" and Kramer was AWOL at that moment, having not signed out at the base.

Kramer is now effectively head of the CCPD, despite being officially titled as the Interim Captain.

Despite everything, Joe still believes Kramer seems like a straight-arrow cop and there's something not right about this whole situation.

Marco, a barista at Jitters, was apparently part of Chester's D&D group at one point. He was kicked out for using fire spells in what was meant to be an unarmed duel.

Allegra tells Chester that she was trying to find her cousin, Ultraviolet, and was using the Citizen Tip Line to get reports of where she had been. She had tracked her to two assassinations in Metropolis and Opal City and gotten word she was back in Central City.

Allegra says she thinks she can talk to Ultraviolet and make her give up crime and be good.

Ultraviolet shows up at Jitters and tears it apart, telling Allegra to stop looking for her.

One of the reasons Sue hung around in Central City was that she heard a former Black Hole assassin was back in town. This is how she stumbled across Allegra and Chester - she was already following Ultraviolet.

Allegra is nowhere near as proficient with her powers as Ultraviolet and can't build up the energy or focus to melt someone's face off.

Chester has no luck finding Ultraviolet's current location, but he does use satellite images to figure out where she was.

Sue uses Chester's map to guess where Ultraviolet's target is, noting that she appears to be using a standard Black Hole recon pattern.

Allegra suggests Chuck stay behind since this could get violent. He agrees.

Allegra and Sue are able to catch Ultraviolet, but discover the man she was going to kill wasn't a target - he was Dr. Olsen; the Black Hole scientist who experimented on her.

Ultraviolet says that her voice was cut out of her by Dr. Olsen. She then reveals the extensive scars on her neck that are su

Sue and Allegra argue about whether or not to help Ultraviolet. Allegra thinks Dr. Olsen sounds like a danger, which Sue agrees with, but Sue says they can't trust Ultraviolet since working for Black Hole warps your mind and destroys your soul.

Joe confronts Kramer with the documents he found from something called Operation Griffin.

Kramer is enraged when she learns that Joe was looking into her past and threatens to arrest him.

Ultraviolet tries to train Allegra in how to use her powers offensively by destroying coffee cups in a make-shift shooting gallery in the Speed Lab.

Sue picks a fight with Ultraviolet, during which Chester is caught in the crossfire and his arm is hurt, requiring a sling.

Ultraviolet escapes, saying she will look for Dr. Olsen herself.

Allegra says that she and Ultraviolet have matching yin-yang tattoos which they got in a back alley as teenagers.

Joe tells Cecile about his meeting with Kramer and how she acted like a guilty person.

Joe is about to contact the governor's office about what he found, when Kramer texts him and asks for a meeting. Joe decides to go, despite Cecile asking him not to.

Sue encourages Allegra to give up on saving Ultraviolet. When Allegra says she knows nothing about what it's like to lose your family to crime, Sue reveals that she discovered her parents weren't really being blackmailed by Black Hole - they were Joseph Carver's willing accomplices, but he used blackmail material to keep them compliant for years as they managed his international accounts. Sue tried to pull them out once Carver was dead, but they were too far gone and didn't want to leave crime behind them.

Chester is able to track Ultraviolet using Allegra's powers as an input signal - the yin to Ultraviolet's yang.

Chester insists on going as back-up in the STAR Labs van.

Ultraviolet finds Dr. Olsen but he asks her if she would consider one last experiment before she kills him.

Dr. Olsen offers to restore Ultraviolet's voice if she kills everyone else who knows about his former operation - including Team Flash.

Dr. Olsen says Allegra and Ultraviolet's powers are fueled by hate. Allegra says that isn't true and channels more energy than she ever did before, thanks to her love of family.

Caitlin describes Allegra's new "supernova" power as a leveling up.

Caitlin takes care of Ultraviolet and looks at Dr. Olsen's note. She thinks she can use them to restore Ultraviolet's voice.

Kramer meets with Joe at O’Shaughnessy's - the bar in Keystone City where Frost fought Chillblaine in 707.

Kramer explains that Adam Creyke was her brother - not by blood but he was the only other Native American kid who grew up off the reservation where she lived as a child. This led to them bonding and joining the Army together.

Kramer denies knowing that Creyke had sold out their unit at the time - only that he was trying to talk her out of going on the mission, for some reason. This was why they had argued the night before.

Kramer asks Joe to help her find Adam Creyke and bring him to justice.

Allegra asks Chester out for coffee that night. When he says he's busy with his D&D and asks for a raincheck, she asks if she could join his game.

Barry returns from his vacation and says he and Iris are thinking of getting a time share on the island in question.

The final scene has Frost tracking down Chillblaine, whom Norvock told her had escaped from Iron Heights.

Chillblaine claims that he had his record expunged after turning State's Evidence on other metahuman criminals and that he's now "one of the good guys" like Frost.

O’Shaughnessy on the south side of Keystone City.

Sue Dearbon apparently had several encounters with Ultraviolet over the past year, including one in Belize.

A mixed bag, all in all. The Kristen Kramer story isn't that riveting since there's no reason to sympathize with her and nothing to justify Joe's faith in her. Still, the season does seem to be pushing the theme of forgiveness and that no one is entirely evil. Allegra's storyline plays into the same theme and it is all right. Unfortunately, when the best parts of the episode leave you hungry for a Sue Dearbon spin-off, something is drastically wrong.
Posted by Starman at 11:32 AM