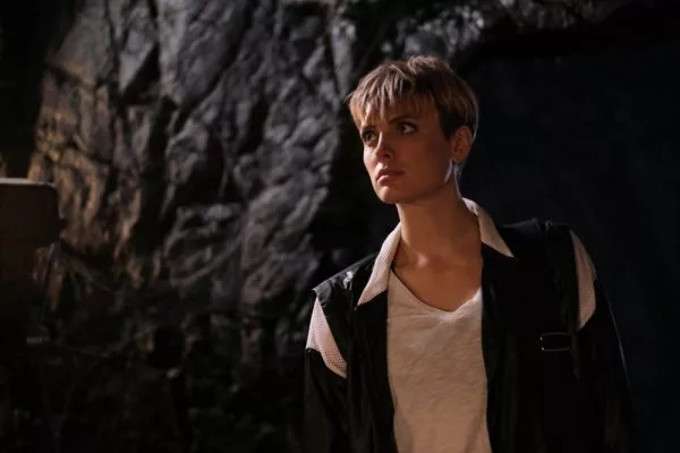 As Alice and Safiyah cross paths once again, Black Mask raises the stakes in the battle for Gotham, as Kate Kane goes to work, thinking she is Circe Sionis pretending to be Kate Kane.

It's a minor thing and all part of the drama of superheroes, but one wonders why Black Mask even bothers bringing Ryan into the police station when the police in his employ could have just killed her and said she was "resisting arrest."

"Circe" leaving the rest of the Bat-Team alive is similarly nonsensical, but at least there there's a possibility that Kate is influencing her actions.

Circe steals the weapons and tools of several classic Batman villains from the Bat Cave; not all of which are identified in the episode. The identified items are a sample of Clayface's mud, one of Killer Croc's teeth, Joker's acid flower, Bane's Venom distribution pump (and Venom) and a sample of one of Poison Ivy's plants. The unidentified items are the Mad Hatter's hat and one of the Penguin's umbrellas.

Mary identifies the drug used to knock her, Luke and Sophie out as haloperidol. Side effects include nausea, confusion and vomiting.


Dialogue Triumphs
.
Ryan: Guys, she went from attacking Mary to ditching Sophie to treating half the lesbians in Gotham to an open bar. Is anyone else worried about what she's gonna do when she wakes up?
Sophie: Well, if I found out my memory had been wiped and then reprogrammed into a dead supermodel, I'd go on a 12 hour bar crawl, too.

Black Mask (addressing the Crows) Every one of you signed up to protect this city with a noble purpose in your hearts, and what did you get in return? Your hands tied by corrupt politicians who care more about some criminal's rights than what is right, a system more concerned with the red tape than the red blood running through our streets. The people you're there to defend would rather defund. Well, I'm here to pick up the tab. I'm gonna give you the tools you need and the free rein to use them, so what do you say? Who wants to take off the gloves... and put on the mask?

Roman Sionis: I am merely a concerned citizen trying to restore justice to a lawless city like you.
Ryan: We are nothing alike.
Roman Sionis: We both wear masks to avenge the wrongs perpetrated against us. I must say I feel that, uh, given the right push together we could give this city its soul back.
Ryan: Yeah, and all I have to do is give up mine.
Roman Sionis: Well, now you're just being selfish. Why should you be the only masked vigilante who gets to be the arbiter of justice? Why shouldn't everyone have the same opportunity? After all, it feels good, doesn't it?
Ryan: It does. It feels good to fight for people who are powerless, people trapped by a broken system, people like your daughter. I know what happened to her, how she was assaulted, how the Crows covered it up, made her look crazy, then threw her in Arkham, where she suffered and died. Where she was murdered. You know what? Maybe we do have something in common because... I know that rage you feel, the need to make someone pay, but using her to justify what you're doing is dishonoring her memory.
Roman Sionis: I don't put much stock in the words of a repeat drug offender. Neither do judges for that matter, not that you're going to live to see one. No hard feelings, Wilder, but I can't have you getting in my way. Good-bye, Batwoman.

(Safiyah is offering Alice a place by her side.)
Safiyah: Come back with me. Come home.
Alice: You want me to come back to Coryana with you? (laughs) Well, that depends. Do you have any non-smoking rooms available? No, because I'm pretty sure that I turned your little island into an all-inclusive ashtray.

This episode opens roughly 10 hours after Kate disappeared in 216.

Ryan questions a security guard as Batwoman, noting that the machine pistol he carries is far too high-end for a typical security guard. This, and his ammunition, reveal that he's part of the False Face Society.

The guard has no idea where Black Mask is, save that he's gone underground. He also doesn't know where "Circe Sionis" is.

Luke has had no luck tracking Kate with facial recognition scans through satellites or traffic cams.

Mary confirms non one matching Kate's description has been checked in at the hospitals or morgues.

Kate is eventually found in the Hold Up, buying drinks for everyone. The team doesn't notice this until a report of a belligerent drunk who acts like she owns the place.

A seemingly drunk Kate recognizes Mary's face this time, but claims not to remember how she knows her.

Mary goes off to look for Alice and finds her with Ocean's body in his subway car base.

Mary lies and says that Kate is doing fine and that she just came to Alice to thank her for helping.

Alice says she should have left Gotham with Ocean when she had the chance.

Luke gives Kate her old journals in a bid to jog her memory.

Kate recalls not liking the beach.

Luke gives Kate the keys to her motorycle.

"Kate" is revealed to be Circe Sionis, pretending that she's an amnesiac Kate, apparently having had her doubts in 216 quieted by Black Mask.

"Circe" gives Black Mask Kate Kane's journals, which she describes as a user's manual to the Batcave.

Safiyah says there is one more thing she needs from Black Mask before she will give him her blessing to continue with his plans for Gotham City.

Ryan starts packing up to move out of Kate's loft.

Sophie offers Ryan space on her couch, but Ryan already has a new apartment lined up.

Russell Tavaroff is among the recruits, but Black Mask notices he looks hesitant. When Tavaroff says he doesn't want to go from being a cog in one machine to being a cog in a different machine, Black Mask says he understands and will help Tavaroff become a machine in his own right.

Ryan overhears Circe, as Kate, telling Luke and Mary that she can't wait to get back in the costume.

Ryan moves back into her van and drives back to where she first found the Batwoman suit.

Ryan is arrested by CCPD officers that are also False Face gang members on suspicion of being a Snakebite dealer.

Alice cremates Ocean and scatters his ashes on the beach. She is joined by Safiyah.

As Ryan is taken into GCPD HQ, Roman Sionis gets in the patrol car while the cops stand watch. He tells her that he knows she is Batwoman . She, in turn, lets him know she knows he is Black Mask.

Sionis tells Ryan that he's going to have her killed.

Sophie shows "Circe" the letter that Kate wrote her revealing her secret identity.

Ryan uses her one phone call to warn Luke that she's been arrested and Black Mask likely knows who all of them are if she's been exposed.

Luke, Sophie, "Kate" and Mary begin planning how to rescue Ryan. However, "Circe" reveals herself and knocks them all out with tranquilizer darts.

Ryan's parole officer is called and reads her the riot act, not believing her when she says she is innocent. She also doesn't believe it when Ryan tells her that she is the new Batwoman.

Four police officers attack Ryan and her parole officer after she says she needs to speak to Judge Hamada. After Ryan is able to knock all four cops out, the parole officer believes she is Batwoman.

Safiyah tells Alice she came without guards because Alice wouldn't kill her if it wasn't fun.

Safiyah says a storm is coming to Gotham and Coryana is the only place Alice may be safe. She offers Alice a place by her side.

Mary, Sophie and Luke wake up locked in the Batcave elevator.

Mary says that Kate must be fighting Circe for control, because that's the only reason they weren't killed.

Circe steals several items from a Bio-Hazard container deep in the Bar Cave.

Ryan comes to the cave and fights Circe to free the others.

Safiyah tells Alice that she intends to regrow her Desert Rose fields using the plant Ryan Wilder gave her and a Poison Ivy vine sample that should allow her to accelerate their growth.

Safiyah also tells Alice that she's getting the sample from Black Mask, in exchange for having killed the man responsible for assaulting his daughter and having her sent to Arkham.

"Circe" beats Ryan and escapes the Batcave, telling Ryan not to feel bad because Kate wasn't strong enough to beat her either.

Alice stabs Safiyah with a Desert Rose dagger, agreeing that killing her wouldn't be fun but making her suffer will be fun and that they can talk after she gets her family back.

Luke determines that Circe stole all the dangerous weapons Bruce had confiscated from his enemies over the years.

The villains make the mistake of not killing the heroes when they are helpless for the sake of drama.

An oddly sedate penultimate episode, which raises the stakes for the season finale but doesn't feel all that tense despite that.