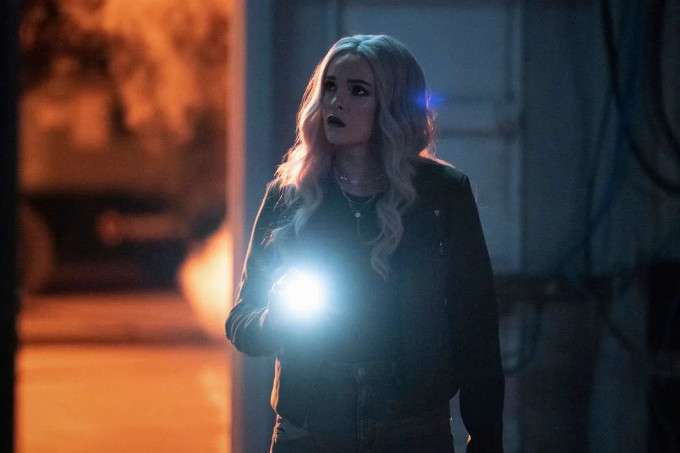 A new metahuman thief with ice powers is on the prowl in Central City and Joe is feeling the heat to bring in Frost, despite knowing she's innocent. Of course Frost isn't going to wait for the rest of Team Flash to prove her innocence, even before Caitlin is arrested in her place. Meanwhile, Barry struggles with the Speed Force, still in the form of his mother, trying to stay close to him as it throws his powers out of balance.

The Flash comics of Mark Waid (character of Chillblaine) and The Fugitive (evoked by Allegra, plot of a wrongly accused person hunting the real criminal while being hunted themselves.)

The presence of dark matter in the ice at the crime scene at Ivo Labs should have exonerated Frost, since she was a natural-born metahuman not created by the STAR Labs particle accelerator explosion.

It's unclear how the charges against Frost were formulated since they involve assault on one of Alchemy's acolytes, the attempted murder of Tracy Brand and the kidnapping of Cecile Horton and Julian Albert. These last three shouldn't have been reported to the police, as they were handled in-house by Team Flash.  (Perhaps things played out differently post-Crisis?)

Even as a state official, Kristin Kramer shouldn't have been able to get the Central City Metahuman Taskforce to converge on O’Shaughnessy's because it was in Keystone City.

Given how empathic Iris is supposed to be, you'd think she'd figure out that Barry is uncomfortable living with a cosmic being taking the form of his dead mother without him having to tell her that outright.

Danielle Panabaker gets a fantastic turn here as Frost and Caitlin and clearly enjoys playing opposite herself.

It's also fun to see the friendship between Frost and Allegra develop and the chemistry between Kayla Compton and Danielle Panabaker is strong.

Cheesy as it is, the sequence with Mark taking his shirt off as Nelly's "Hot In Here" plays is a well-played laugh.

The fight scene between Chillblaine and Frost is well executed.

The bar where Frost seeks information is called O'Shaughnessy's. In the DC Comics universe, O'Shaughnessy's is the name of a popular fast food chain, comparable to McDonald's, and the chief rival of Big Belly Burger.

The first version of Chillblaine appeared in The Flash Annual #4 in July 1991. Originally Chillblaine was a title which Golden Glider bestowed upon various henchmen, along with her brother's cold gun, when she was trying to make her own way in the criminal underworld. Unfortunately for Glider, the fourth Chillblaine got ambitious and killed her. This Chillblaine was eventually killed by Captain Cold in The Flash #182 (March 2002).

The Arrowverse version of Chillblaine is a scientific genius named Mark Blaine, who invented a pair of gloves that give him cryonic powers.

While giving Frost the run around, Mark suggests that she check out the Wieringo Complex for a lead on the thief who framed her. This is a nod to artist Mike Wieringo, who was the co-creator of Bart Allen/Impulse.

Gin has a specific gravity which will cause it to rise above denser liqueurs like crème de noyaux.

According to the Speed Force, White Hole singularities can exist without mass.

Chester determines that the dark matter in the Ivo Labs ice isn't really dark matter, but some sort of half-life variant with compacted membranes. This proves that the killer is not a metahuman.

Chillblaine used a neurogenic scan of Frost to replicate her powers.

Chester: Anybody else taste pennies? It tastes like there’s 78 cents in my mouth.

The freeways in Central City included Route 220 and Route 119.

The Speed Force knows how to cook and can make blueberry compote and bacon and baked egg Danishes.

Barry is experiencing power surges where his speed goes out of control. The effect seems to get worse whenever the Speed Force is nearby.

The Speed Force says she is trying to boost Barry's power while she is healing, acting as his living battery.

Cisco and Kamilla are still on vacation together.

Chester gets his first call to a crime scene as a STAR Labs consultant.

An Ivo Labs van was robbed by someone with ice powers who stole an experimental microchip and killed the driver.

The CCPD still has Leonard Snart (aka Captain Cold) listed as off-the-grid.

Chester determines that the dark matter levels in the ice at the Ivo Labs robbery are off the charts. However, Barry notes that the crystal pattern is totally different than Frost's.

Kristin Kramer orders Joe to mobelize the Metahuman Task Force and says she is going to get the Central City DA to issue a warrant for Frost's arrests, despite Barry and Chester saying there's no real way to connect her to the crime.

Caitlin and Chester start working on altering one of HR Wells' transmogrifiers to allow Frost to move around unnnoticed.

Frost is in hiding at STAR Labs, but isn't happy about it, despite having found a work-out partner in Allegra.

Frost decides to hunt for the killer on her own and asks Allegra to keep quiet about her sneaking out.

Barry barely manages to cover himself after the Speed Force shows up at the Ivo Labs crime scene and his powers go out of control around Kristin Kramer.

Frost used to work at a bar called O’Shaughnessy's in Keystone City which was a hangout for a lot of criminals.

Mark, the new bartender at O’Shaughnessy's, helps Frost out in the fight and suggests she check out the Wieringo Complex off Route 119, warning her that there's a new metahuman in town with a thing for experimental tech.

Chester suggests they use the Speed Force to process the data for the Frost case. Barry is against it and his "take it slow" attitude is justified when The Speed Force's presence cause shim to spaz out and shorts out the computer running the calculations.

The CCPD are given a tip on Frost's whereabouts and the Task Force is sent to Caitlin's apartment to arrest her. They also send Rene Carpenter, a clinician with the Mental Health Evaluation team.

Kramer didn't find anything incriminating in Caitlin and Frost's apartment.

A simple blood test can prove Caitlin doesn't have the metagene. After that, she should be released.

The fact that someone tipped Kramer off about Caitlin means that whoever is framing Frost also knows that Frost and Caitlin used to be one person.

Frost plans to break Caitlin out of prison, but Caitlin talks her out of it.

According to Kristin Kramer, Caitlin's fingerprints were found all over the Ivo Labs van and the known whereabouts of Caitlin Snow match up perfectly to sightings of Frost over the past few months.

Barry tells Iris that he's not comfortable with the new Speed Force.

Iris reminds Barry of how odd it was between her and Joe when she moved back home after college and suggests maybe he and the Speed Force just need time to get used to one another and the changes.

Chester finds proof that whoever killed the Ivo Labs guard wasn't a metahuman.

Allegra confesses that Frost has been trying to find the real killer on her own.

Mark reveals his full name is Mark Blaine and that he'd planned to frame Caitlin for his crimes. He claims he figured out Caitlin was Frost by being observant.

Mark Blaine confesses that he was a cryo-geneticist who used to work for Ivo Labs, who was going to be fired and arrested for his inhumane experiments. He stole the microchip from Ivo Labs because it was the culmination of his work.

When he was 9, Mark fell through a frozen lake while ice skating and was submerged in freezing water for 15 minutes. Afterward he became obsessed with the power of ice, believing if offered mastery of life and death.

Mark dubs himself Chillblaine and attempts to kill Frost with the gauntlet he made that gives him cold-blast powers. It does not end well for him, as Frost is still able to impale him on an icicle even after he snow-blinds her.

Allegra and The Flash go to O’Shaughnessy's after Chester detects a major cryokinetic spike there.

Allegra is able to safely melt the ice on Frost's face as The Flash patches up Chillblaine's wounds.

Kristin Kramer shows up with the CCPD Task Force. Frost decides to turn herself in, saying she needs to pay for the crimes she committed in the past, to prove she's serious about reforming.

Caitlin is released from prison.

Cecile is trying to negotiate bail for Frost.

Frost is pleading guilty to all charges, so all that remains is a sentencing hearing.

Chillblaine is said to be heading to Iron Heights Prison.

Barry apologizes to the Speed Force and has apparently stopped glitching.

O’Shaughnessy on the south side of Keystone City.

An odd episode that succeeds only because of the charisma of the cast. The subplot with Barry and the Speed Force is a little weak, but thankfully most of the episode is focused on Frost and the rest of the ensemble bouncing off of her.
Posted by Starman at 7:28 PM