The Flash Episode Guide: Season 8, Episode 8 - The Fire Next Time 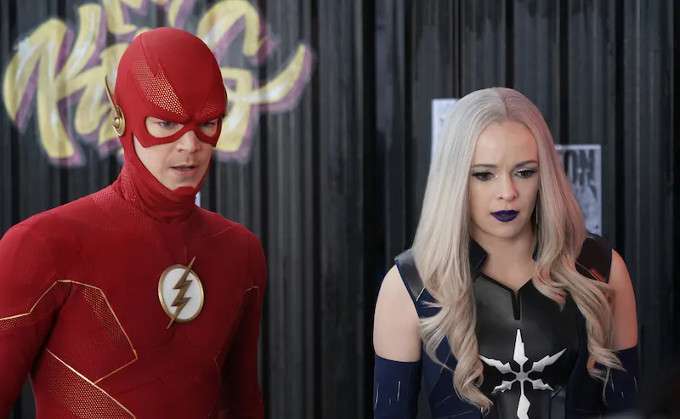 When an paroled metahuman criminal is accused of murder in a seemingly open-and-shut case, Barry goes all-out in both his personas to see justice done. Meanwhile, Iris tries to give Allegra an opportunity to mentor a new writer.

Law and Order (the episode is more concerned with legal proceedings than usual.)

Cecile's new rule against using her powers to read if people are guilty or innocent seems to have been introduced only to prolong the drama of the episode and the question of whether or not Jaco Birch has become a killer. (It's also somewhat nonsensical given the whole reason Cecile became a defense attorney in the first place was so that her work as a lawyer wouldn't harm innocent people, after almost sending Allegra Garcia to prison.)

Iris' behavior as editor-in-chief is completely unprofessional. No serious head editor would allow a staff writer to go behind the back of a lower ranked editor after having a pitch rejected. (This is not to say this sort of thing does not happen at less than reputable publishers, but it's hard to make Iris look at all competent when she does this sort of thing, especially after the revelation at the end that Taylor is scheming to take Allegra's job.) It nothing else, Iris should have made it clear that she was trying to get Allegra to mentor Taylor instead of trusting Allegra to automatically work to help the newer writer to develop a weak idea.

Jaco's confrontation with Donna Winters doesn't make a lot of sense unless he is guilty.

Jaco's being treated like a hero for stopping a volcano from destroying Central City falls flat considering it was his powers that accidentally created he eruption in the first place.

The scene of Joe and Barry discussing Barry's father and Jaco's case is a great moment for Jesse L. Martin and Grant Gustin.

The title of the episode comes from an essay by James Baldwin about racism in America.

The social media influencer Taylor wants to interview is a woman named Rose Levin. In the comics, Rose Levin was an ancestor of Booster Gold, who wrote a popular blog devoted to proving that Booster Gold was also the hero Supernova.

Barry notes that Stan Mullen's body is burned all the way through, but there's no fire damage to the ground underneath his corpse or any signs of fire damage elsewhere in the bar. This suggests a metahuman attack, as nothing else could create a fire that violates the laws of physics in that way.

Chester confirms the local dark matter readings are consistent with a metahuman attack.

Barry's tomography reports regarding Donna Winter's body confirm the thermal lesions on her body match the marks on Stan Mullen's body exactly. Barry says there is no pyrokinetic meta who could replicate burns like that even if they tried.

Jaco Birch's powers are tied to his emotional state, with his fire becoming hotter the more angry he is.

Chester cross-references the heat signature from both murder victims and determines the signatures produced an anomalous heat effect created by non-composites reacting to hydrogen isotopes, i.e. cold fusion. This proves that Jaco Birch can't be the killer since his powers come from absorbing heat and redirecting it as fire.

Jaco's powers are tied to the earth beneath wherever he's standing. When he became upset at the thought of losing his son, he absorbed so much heat from the planet's core that he opened up a lava channel under Central City.

The Flash phases into the water table under the city releases it directly into the lava channel. This stops the eruption but not the massive heat exchange that would have cooked the city if Jaco hadn't used his powers to absorb the heat.

Barry: Joe, the look in my dad's eyes that night... It was the same look in Birch's eyes when they arrested him. Look of an innocent man... desperate not to lose his son... Begging someone to believe him.
Joe: And you do.
Barry: Yeah, I do. I just keep thinking about all the time my dad lost. (sighs) All the birthdays we spent, separated by plexiglass. I can't let Birch and his son go through that if he's innocent. (inhales deeply) I don't know. Maybe the team's right. Maybe I'm making something out of nothing. You think maybe I've had blinders up this whole time?
Joe: Maybe. Or... You can see something they can't. Look, what you went through, I wouldn't wish on anyone. But what it did, was it gave you the ability to believe in the underdog when no one else is willing to. So... If your gut tells you... To not give up on Birch... Then for Henry's sake, don't. Not yet.

Barry: The fact that Birch ran away doesn't change the evidence. There's still nothing directly tying him to Mullen's death.
Cecile: Sure, Barry, sure, but fleeing custody is not exactly exculpatory, and I am saying that as his lawyer.

Smoke fills the bar just before Stan is burned to death.

A calendar reveals that it is February 1st.

Iris suggests going out to dinner until she sees the calendar, at which point she suggest that she and Barry have a night in or that they both call in sick. Barry dismisses this, however, saying there's too much going on at work and that it is "just another day." It is later revealed that it is Dr. Henry Allen's birthday.

Chester is revealed to have a fear of fire.

After looking at the crime scene and hearing from Donna that Stan had gotten into an argument with a patron the night before, he recalls something and shows her a photo asking if she recognizes the man in it. She confirms that she does.

The man in question is Jaco "The Hotness" Birch.

Jaco first appeared in 416, where he accidentally gained the powers of Eric Frye because of Melting Pot. It is unclear if he never lost the powers afterward or if he regained fire-generation powers following Crisis on Infinite Earths. In any case, he apparently served time for arson at Iron Heights and was recently paroled due to his good behavior.

Chester notes that Jaco was a thief, not a killer, from what he knew of his record.

Barry notes that Jaco never had the fine control needed to kill someone without burning a building down.

The CC Citizen is starting a new "citizen of the week" profile feature.

Taylor Downs requested she be allowed to write about social influencer Rosie Levin for the first feature.

Allegra rejected the pitch, believing Rosie Levin to be the sort of pseudo-celebrity CC Media shouldn't give a platform.

Iris reveals that Taylor went to her after Allegra rejected the pitch and she approved it, saying that they need the clicks Rose Levin's 500,000 social media followers might bring in.

Allegra is not happy that her authority is being ignored. Iris says that it's her privilege as Editor In Chief to make decisions Allegra disagrees with.

The CCPD approach Jaco Birch as he's showing his son Harold around his new job as an arena security guard. Harold is less than impressed.

The Flash steps in and knocks Jaco into a fountain before he can use his powers.

As Jaco is being taken away by the police in front of his son, he proclaims his innocence in a way that causes Barry to start having flashbacks of his father's arrest.

Barry approaches Cecile and asks for her advice regarding Jaco' case. Cecile agrees to represent Jaco, but refuses to use her powers to read if he is guilty or innocent.

Cecile says the case against Jaco is open-and-shut, due to his having means, motive and opportunity, in addition to the witness who saw him threatening Stan Mullen before his death.

Allegra zones out of the interview with Rose Levin, after she talks about quitting college because she found the university environment to be like a prison.

Allegra recognizes a janitor at CC Jitters as Lydia, a woman she served time with in Iron Heights.

Lydia recognizes Allegra and reads her the riot act for forgetting where she came from and not using her position to help people who are struggling.

Allegra says Lydia is right and she's going to write about her.

Jaco is concerned about his son, who was neglected by his mother while Jaco was in prison.

Jaco says his love for his son was what made him work so hard to get paroled, having his four year sentence commuted somewhat.

According to Jaco, his argument with Stan Mullen was regarding a guitar she was trying to sell. Stan only wanted to pay half what he had previously agreed.

Barry says he believes Jaco is innocent, but nobody else is convinces after Jaco escapes from the truck transporting him to holding.

Jaco confronts Donna Winters and threatens her if she doesn't recant her testimony.

Barry makes reference to Frost going on the run after Chillblaine framed her in 707 as proof Jaco could be innocent.

Donna Winters' body is found, burned in the same way as Stan Mullen's, behind O'Shaughnessy's.

Chester agrees to take a look at the data, but he's convinced Jaco is guilty too.

Barry sets up a murder board in his lab at CCPD.

Joe checks on Barry and says it's been eight years since he saw one of those, in reference to the one Barry made for his father's case.

Joe recalls that Henry Allen missed his 45th birthday party due to an emergency call. Henry was disappointed, but Joe comforted him saying there would be other birthday parties. Unfortunately, it was the last one he enjoyed as a free man.

Allegra writes about Lydia what what ex-cons like here are going through to make ends meet.

Iris agrees its a much better piece than Taylor's fluff piece, but says it isn't what she wanted her to write. She also wanted Allegra to mentor Taylor and help her develop her idea to be more in depth.

Despite this, Iris decides to run Allegra's piece as the first CC Citizen of the Week profile.

Chester finds proof that Jaco can't be the killer. Unfortunately, it comes as he attacks the social services worker transporting his son.

An earthquake begins shaking the city as Jaco is holding up the convoy.

With the Flash advising him, Jaco is able to stop the eruption and save the city.

Jaco is found innocent and given custody of his son.

Allegra tries to apologize to Taylor, but she swears to destroy Allegra.

Henry Allen was bad at softball and liked lite beer.

Henry Allen never made Barry clean his plate as a child and read him the same bedtime story whenever he wanted it - a story about a hippo trying to make friends by making cookies.

Iris is made to look utterly incompetent as an editor-in-chief, allowing Taylor to ignore the chain of command while giving Allegra a hard time for demanding her authority be respected. She also doesn't make it clear that she was trying to give Allegra some managerial experience mentoring Taylor.

Granting that Jaco Birch is presented as a hot-tempered idiot, his efforts to escape prison, confront the woman who accused him or murder and kidnap his son from social services are idiotic even by the standards of a Flash villain.

There's a good idea here and some great acting from Grant Gustin. Unfortunately, all the scenes of Joe and Barry bonding can't make up for how contrived the plot with The Hotness is and how idiotic Iris' storyline is, in how it twists reality to try and make Iris out to be this brilliant boss while she's undermining Allegra and failing to communicate her expectations beyond "because I said so."