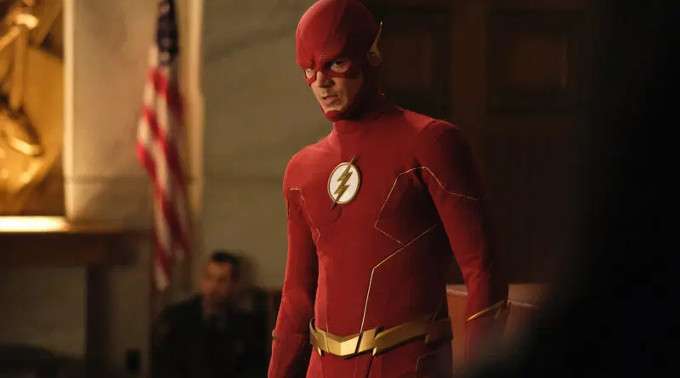 When Goldface launches a bold raid on CCPD HQ, Barry will have to work around Captain Kristen Kramer to save the day. Meanwhile, Caitlin learns a valuable lesson after accidentally running into Chillblaine and Frost while on a date.

It is impossible to believe that Barry Allen, even as a CSI, would not be intimately familiar with the procedure for arresting a perpetrator and making the charges known to the police officers when he hands them over for a formal arrest. (If nothing else, you'd think he could write up an official statement at super-speed!)

It's even more impossible to believe that neither Joe West nor Cecile Horton would approach Barry about his apparent habit of leaving criminals tied up in CCPD HQ with no indication of what they did so they could be properly charged.

It's particularly unbelievable that the CCPD doesn't have a process for making sure its many supervillains are properly processed by its many superheroes.

Allowing that it's possible for Barry to be surprised by a gas attack, he should have recovered before the other police officers given his accelerated healing.

Why, out of all the places she could take her new boyfriend, did Caitlin take him to O'Shaughnessy's - the bar all the villains hang out and and where Chillblaine used to work? (It's possible she was intentionally trying to force a confrontation but Caitlin's dialogue suggests it wasn't intentional.)

There should probably be some kind of oversight that prevents Captain Kramer from sending the experimental anti-meta bullets (which she commissioned in the first place) to ARGUS without informing anyone.

Given that she's in contact with ARGUS and military minded, you'd think Captain Kramer would consult with them about some kind of metahuman training program rather than waiting to ask The Flash about controlling her powers. (Come to that, you'd expect the CCPD to require her to be trained in using her powers safely.)

While Goldface's efforts to educate his henchmen are laudable, it seems unlikely that he'd try to get his right-hand interested in literature by giving him a rare first edition of a book he'd never read.

Grant Gustin, Jesse L. Martin and Danielle Nicolet are to be commended for keeping a straight face reading their dialogue in their scene together.

Conversely, Damion Poitier steals the show by refusing to treat his farcical dialogue with any degree of seriousness.

Frost and Chillblaine's karaoke team name is The Ice Pack. In the comics, the Ice Pack was also the name of a supervillain team made up of villains with cold gimmicks, including Mr. Freeze, Captain Cold, Killer Frost, Blue Snowman, Mister Blizzard and Icicle.

Chester shows off a self-flying drone based off of an AI algorithm he created on his podcast.

There are 0.35 grams of gold in a cell phone, which is apparently enough for Goldface to be able to use his powers to control phones.

Marcus tries to comfort Caitlin by telling her that last week he screwed up the blooming cycle for the Selenicereus grandiflorus he was growing at work.

According to Marcus, the pads of the Opuntia cacti pair perfectly with an agave spirit.

Barry is able to reset the scanner in his lab from infrared to infrasonic, turning it into a make-shift sonic stunner device that allows him and Kramer to escape Goldface.

Barry theorizes that meta-dampener cuffs short out trying to cancel out a power mimic's powers because they release RNA energy pulses that repress metagenes. Since Kramer's DNA is constantly morphing based on her adrenaline levels and proximity to other metahumans, this overloads the cuffs, which were not designed with erratic gene fluctuation in mind.

Too many to list, but the fact that Caitlin is dating a plant expert named Marcus Ficus pretty much sums up most of the episode's attempts at humor.

Team Flash now has an official monitor duty roster. As the episode opens, Chester is on duty.

Chester has a Supergirl lunchbox.

Chester and his grandmother trade off on making egg salad for one another's lunches.

The events of this episode take place on a Wednesday.

Allegra shows up unannounced at STAR Labs, intending to take Chester out to lunch at Hershfield's, - a place that makes amazing chicken parmesan sandwiches.

As they are about to leave, Chester is alerted to a hold-up at Jitters, a mugging off Route 119 and a carjacking at Edwards Center.

Barry takes care of all three crimes in less than a minute and leaves the offenders tied up in CCPD HQ's lobby.

Captain Kramer complains to Barry that it will take them the rest of the day to figure out just what the criminals did since The Flash didn't leave a report or any evidence they can use. She wishes she had some way to contact The Flash directly.

Joe and Cecile think Kramer has a point, given that they had a direct line to Barry and the new CCPD doesn't have that benefit.

Barry is reluctant to give Kramer a "Flash Phone" and instead resolves to make it easier on the police by redoubling his efforts to find good evidence as a CSI.

Caitlin is meeting her new boyfriend, Dr. Marcus Ficus, for dinner at The Spanish Hamper, which is apparently the hottest restaurant in town.

This will be Caitlin's third date with Marcus.

Chester speculates on if Marcus will soon be part of Team Flash or develop plant control powers.

Barry hustles to get all the evidence needed to convict the three criminals The Flash caught, but Kramer still isn't satisfied and wants a way to talk to The Flash.

Someone gasses CCPD HQ, knocking out all the cops, including Barry.

When the police wake up, they are all wearing meta-dampener cuffs and are being held hostage by Goldface. The cuffs also explode if the wearer tries to use their powers.

Goldface reasoned that with one metahuman now running the CCPD, there were good odds that there were other metahumans on the force.

Goldface recognizes Barry as The Chemist - the villain name he used when he first encountered Goldface while undercover in 513.

Caitlin accidentally made her dinner reservations at The Spanish Hamper for January next year. She decides to take him to O'Shaughnessy's - the bar that is a frequent hangout for meta-criminals where Chillblaine used work.

It's karaoke night at O'Shaughnessy's and Frost and Chillblaine are singing Journey's "Cold As Ice."

Frost and Chillblaine suggest a double date, which Caitlin is clearly uncomfortable with. Marcus, however, is agreeable to the idea.

Goldface reveals that he's come to steal the Anti-Meta bullets that Kramer had made in Season 7.

When the bullets are not in the armor, Goldface tries to strangle Barry with his chain and says he will kill him if Kramer won't tell him where to find them.

Barry says he can use a scanner in his lab to find the bullets, based on their dark matter signature.

Chillblaine invites Marcus and Caitlin to join them in a skydiving date next week, but Caitlin is afraid of skydiving.

Caitlin tells Frost she is being naive and that Chillblaine is just going to hurt her again.

Goldface's ringtone for when Amunet Black calls him is "Love is a Battlefield." This was revealed to be their song in 611.

Amunet is apparently in London.

Barry discovers that Goldface and Amunet Black are seeing the same couples' counselor as him and Iris - Dr. Sharon Finkel. He says their relationship and their business has never been better since they started working together.

Goldface has a BA in Literature from Yale and is dismayed that his right-hand man Carver doesn't get his references to Moby Dick or even Wrath of Khan.

Goldface bought Carver a first edition of Moby DIck for his birthday.

After turning his scanner into a sonic stunner, Barry and Kramer are able to escape through a vent in his lab to a storage room for junked equipment.

Kramer's powers cause her cuffs to short out.

Kramer says her powers only work for 30 seconds at a time and only when she is stressed.

Barry suggests that Kramer use her powers to counter Goldface and take him down. She refuses to consider this, however.

Chillblaine tells Caitlin he doesn't think she hates him so much as she's afraid to take the next step with Marcus and is responding by tearing down Frost's relationship.

Kramer tells Barry that she can't control her powers, so there's no way she can copy Goldface's abilities intentionally.

Barry realizes Kramer wants to get in touch with The Flash so he can train her to use her powers.

Barry gives Kramer a pep-talk and tells her to trust her instincts and discipline.

Kramer is able to distract Goldface long enough for Barry to remove his cuff and outrun the explosion. He is later able to make quick work of Goldface and his men.

Caitlin apologizes to Frost for being rude to her and Chillblaine.

Frost signs them all up for roller derby for their next double date.

Barry visits Kramer as The Flash and gives her a pager and says he wants to let her know his secret identity. However, Kramer already figured it out, saying there was no way Barry could have escaped the exploding cuff unless he were The Flash.

Joe has been studying cooking since retiring and learned how to make a doro wat.

Iris fades out of phase with time, but hides this fact from her father.

Frost and Chilblaine have a number of adventurous dates involving cliff diving and other extreme sports.

The entire episode's plot is built around the idea that The Flash has been routinely leaving criminals tied up for the police with no indication of what their crimes were and that neither Joe West nor Cecile Horton ever told Barry that this was making it impossible for them to do their jobs.

Painfully dumb on every level. The best thing that can be said about it is that it makes the ending of Armageddon seem better by comparison.