The Flash Episode Guide: Season 8, Episode 14 - Funeral for a Friend 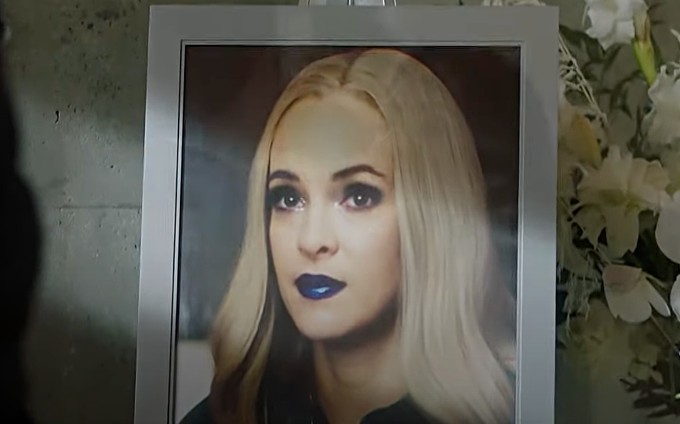 Team Flash struggles to apprehend a new power-armored bank robber, while figuring out how to best mourn the fallen Frost.

In the original synopsis of this episode released with the previews, Blockbuster was described as a metahuman. The Arrowverse version of Blockbuster revealed in this episode gets his powers from a stolen suit of power armor.

Caitlin is clearly being played by a body double in one scene of the montage of Caitlin gathering all of Frost's belongings.(This was likely due to Danielle Panabaker's pregnancy at the time of filming.)

The opening montage of everyone on Team Flash remembering Frost is rather touching.

The title of the episode comes from an Elton John song.

This episode introduces the Arrowverse version of Mark Desmond, aka Blockbuster. First appearing in Detective Comics #345 (November 1965), Desmond was a chemist who developed a formula that increased his strength while decreasing his intellect and making him almost mindlessly aggressive. This made him easy prey for his criminal brother, Roland, who exploited him for his own benefit. The Rogues, Secret Society of Supervillains and Suicide Squad did the same thing until Desmond's death. This version of Blockbuster is not used often in the modern comics, due to his being a rather obvious rip-off of the Incredible Hulk, right down to his torn purple pants.

A different version of Blockbuster was mentioned in A713 as being a crime boss in Bludhaven who Dinah Drake brought down while working undercover. This was likely a reference to the second Blockbuster in the comics, Roland Desmond, who developed the same condition as his brother but made a deal with the Demon Neron to have his intelligence enhanced along with his body. He became the kingpin of Bludhaven's underworld and the archenemy of Nightwing. There is no indication this Blockbuster exists post-Crisis, however.

The Arrowverse version of Mark Desmond steals an exo-suit from Ivo Labs that gives him enhanced strength while making him more mentally unstable. In this way he has the same powers and weakness as his comic book counterpart, without being an obvious Hulk rip-off.

Allegra calls Chester "Condiment King" at one point. The comical villain was confirmed to exist in the Arrowverse in B309, when it was revealed his condiment gun was one of the trophies in Batman's vault of villain weapons.

The Ivo Labs exo-suit worn by Blockbuster amplifies the wearer's biochemistry, so everything from movements to emotions makes them stronger but also makes them more unstable.

The exo-suit also has cloaking technology that prevents it from being tracked.

Caitlin "borrows" a genome sequencer for her new lab.

(A hungover Chillblaine emerges from the Med Lab, surprising Barry.)
Barry: How long were you in there?
Chillblaine: (panting) I was hoping you could tell me. Hey, do you mind telling the contractors to knock off all the hammering or whatever that is?
Barry: Uh, that's... not construction.
Chillblaine: Oh, great. Guess I overdid it with the bourbon... And the tequila... and the vodka.

Chillblaine: What's impossible for The Flash?

Barry: Look, Caitlin, um... about yesterday morning in the lounge.
Caitlin: It's fine. I know you were just trying to help.
Barry: You know, trying and knowing the right words to say aren't the same thing. And I'm sorry. I said everything wrong.
Caitlin: We've both been through a lot over the last couple of days, so I think it's okay to let ourselves off the hook. But you don't have to worry about me. I'm good, honest.

(Barry tries to talk Caitlin into attending the funeral one more time.)
Caitlin: Unbelievable. I mean, do you hear yourself right now? This isn't even about me. This is about you and your need to be the hero. I am not one of your missions, okay? And not everything can just be fixed with speed healing. But I need to grieve Frost in my own way. So if you don't mind, will you please leave?
Barry: Look, Caitlin, I will leave you alone if that's what you really want, but before I go, just ask yourself one thing. What would Frost want? For you? You knew her better than anybody. Would she want you to pull away? Would she want us to let you?

Blockbuster: Pathetic. Worst heroes ever. (He's not wrong, but when your villain sounds like the Comic Book Guy...)

Barry: I think she's preparing for the funeral tomorrow. Maybe we should do the same thing. (Wait... so none of Team Flash were going to Frost's funeral until Barry suggested it?)

The opening montage shows Chester, Allegra, Iris and Barry remembering Frost. The reasons why range from Chester seeing a sign promoting the Killer Frost drink at CC Jitters to Barry still staring at the bed where Frost died in 813.

Team Flash is summoned to the site of a bank robber who is wearing some kind of high-tech exo-suit.

Chester determines the exo-suit was stolen from Ivo Labs.

As Chester is formulating a battle plan while Barry tries to save the people in a collapsing building, he forgets that Frost isn't there. This causes Allegra to execute half of a plan with no back-up, as Cecile becomes overwhelmed by Blockbuster's emotions.

Barry suggests the team all need to grieve Frost in order to get their heads back in the game before fighting Blockbuster a second time.

Caitlin is surprised to find Team Flash is having a meeting. Barry explains they thought she was busy preparing for Frost's funeral.

Caitlin revels that her mother is handling all of the arrangements and she isn't going to the funeral.

Joe suggests that everyone find a way to honor Frost's memory, revealing that he's started taking watercolor classes because of her pushing him to try art the same way she did.

Iris and Cecile have lunch together and discuss Joe's idea.

Iris says she was going to write a special obituary for Frost, but is afraid she may accidentally expose herself as a member of Team Flash by writing about her in detail.

Iris assigns Aariz, a writer for CCC Media who used to write obituaries for "Stars and Stripes" to write Frost's obituary, since he had experience writing about soldiers who had no family or died while on classified missions where he didn't have all the details of their lives.

Iris shows the obituary to Frost and Caitlin's mom. She thinks it sounds cold and impersonal.

Iris admits the real problem is she never really got to know Frost and isn't sure what to say about her.

Carla says that Frost's legacy is not what people thought of her but the lives she saved.

Iris hosts a special episode of her Citizentopia podcast devoted to interviewing people Frost helped. This includes a young couple named Kamiko and Jamal (who got married after Frost saved them during Bloodwork's attack on Central City) and a graffiti artist who Frost let off with a warning after he tagged his territory. He says he's going to open his first gallery exhibit next week.

Iris also interviews the former DA of Central City, who tried to prosecute Frost in 708. Frost's example during her trial inspired her to quit the state prosecutor's office and become a defense attorney specializing in metahuman law in Star City.

CC Jitters, as a result of Iris' broadcast, changes the name of the Killer Frost drink to Frost.

Allegra disagrees with Joe's idea of doing something special to honor Frost, but Chester thinks it is a good idea.

Chester considers building a special case with cryo coolers to hold Frost's costume, similar to the eternal flame Barry and Supergirl made for Green Arrow's memorial. Allegra thinks that's a stupid idea that would just look like a giant snow globe.

Allegra and Chester keep arguing, with Chester accusing Allegra of never offering ideas of her own while shooting down all of his suggestions.

Allegra and Chester argue about whether or not humus is a condiment or a dip or a side dish and should be put on a sandwich.

Barry interrupts the argument to ask where the team's Arctic parkas are stored.

Barry is carrying an oar and wearing a life vest. This is a reference to his promise to take a whitewater rafting trip with Frost in 619 and foreshadows later in the episode when it is revealed he is trying to complete everything on Frost's bucket list.

Chester and Allegra travel to O'Shaughnessy's after the CCC tip-line picks up multiple reports of something odd happening. This turns out to be a drunken Chillblaine freezing the bar and singing the same sad songs over and over on the karaoke machine.

Allegra uses her powers to thaw out the bar safely.

Chillblaine says Allegra and Chester aren't really fighting - just helping each other see the world in a different way.

Allegra and Chester set Chillblaine up in the medical wing of STAR Labs after he passes out.

They ultimately agree to hang up the jacket from Frost's first superhero costume in the Hall of the Fallen in STAR Labs.

Frost's bucket list includes building a snowman on top of Mt. Everest, mastering ice sculpting, swing dancing with Judd Nelson, attending a samurai school in Kyoto, entered a hot dog eating contest and having her art hung in the Louvre. Barry does all of this in Frost's memory.

Chillblaine tells Barry that Frost was all about experiencing things rather than doing them. He tells Barry that they signed up for a couples tag-team wrestling tournament but they gave their championship belts to some kids at the ramen joint where they celebrated after.

Barry says he knows how to honor Frost's memory, but says it seems impossible. Chillblaine says nothing should be impossible for The Flash.

Caitlin is shown gathering up Frost's belongings in their apartment.

Barry visits Caitlin before the funeral to try and talk her into attending after apologizing for not listening to her reasons for not doing it.

Barry notices that Caitlin has a large bottle of over the counter sleeping pills.

Barry agrees to leave Caitlin alone, but asks her to think about what Frost would want.

Caitlin recalls her promise to Frost in 811 about not closing herself off from the team ever again.

Caitlin ultimately attends the funeral wearing one of Frost's blue dresses. She delivers tender eulogy, talking about Frost's courage, swimming with the sharks and then picking a fight with one and going to poetry slam nights with a poem she'd written on a napkin five minutes earlier.

Joe organizes a wake of sorts for Frost in his home and talks about how Frost took all his cleaning supplies for a collage, which is why he wound up using bleach to clean his curtains.

According to Chester, Wild Dog is using one of Joe's old mop handles as a bo staff.

The wake ends after the team gets an alert of Blockbuster being on the loose.

Joe asks Caitlin to stay with him and tell him more Frost stories.

Caitlin calls Chillblaine and asks her to meet with him at her apartment.

Chillblaine recognizes the device Caitlin is carrying as a genome sequencer.

Caitlin has turned her apartment into a lab. She asks for Chillblaine's help in resurrecting Frost.

Taylor tells Iris that Allegra isn't doing a good job as editor and asks for permission to investigate the heroes who help Flash out. Iris dismisses the story idea.

Iris vanishes from her office shortly after Taylor leaves.

Caitlin is made to look unreasonably cold and awful, driving her friends away to grieve alone before finally being guilted into attending Frost's funeral... only to go over the edge into full blown villainy.

Despite some clunky dialogue, most of this episode is surprisingly heart-felt and sincere. Shame the last few minutes and Caitlin's sudden and incredibly out-of-character decision to become a mad scientist completely ruin it.