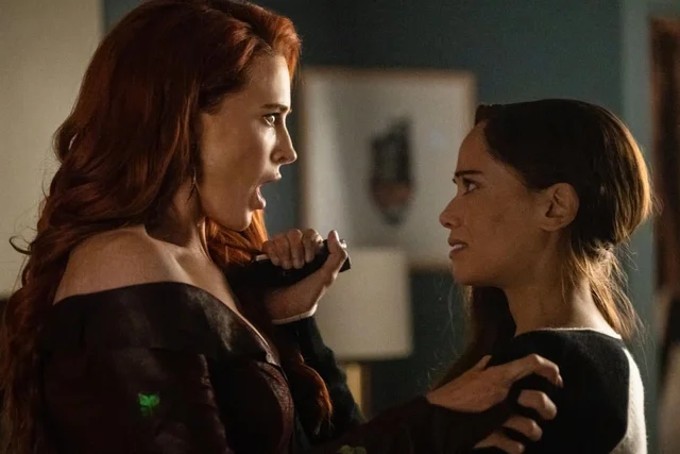 With multiple signs pointing to the original Poison Ivy having awoken, Ryan, Luke and Sophie begin trying to track her down, while Montoya attempts to reach whatever remains of the woman she loved. Meanwhile, Mary's behavior begins to unnerve Alice, as Jada Jet seeks out an old friend's help in saving Marquis.

Every horror movie where the idiot protagonists are trapped in a cabin in the woods and A Quiet Place (trying to avoid triggering killer plants tracking sounds).

The special effects for the killer plants are interesting.

The lake where Poison Ivy kills two fishermen is called Loeb Lake. This is likely in honor of legendary Batman writer Jeph Loeb, who wrote Hush and The Long Halloween.

Luke creates special darts for fighting Poison Ivy that combine a paralytic drug and a herbicide. He's certain this will slow her down without killing her until they can recreate Batman's desiccation formula.

All the psychologists Jada Jet consulted with believe a second jolt of the Joker's joy buzzer will reawaken Marquis' sense of empathy.

Natural networking is where plants communicate through acoustics in the ground.

Poison Ivy describes the cutting of her vine that Batman kept as a sporeling, which she created to recharge her, like a battery without a plug. She says that meeting Mary will restore her.

Luke describes Diggle's box as a transmatter cube and guesses it isn't from Earth. Diggle confirms this, but asks him to keep that quiet.

Poison Ivy: What were you thinking would happen when you freed me?
Montoya: I wasn't. I got wrapped up in the moment, seeing you, the white tulip, the memories, the guilt.
Poison Ivy: Ah. I'm so sorry that you had to feel guilt, Renee, while I rotted for a decade with no water, no sunlight, no soul mate. Must have been really awful for you.
Montoya: I am sorry, Pam.
Poison Ivy: How am I supposed to believe that? I needed you... more than anything, and you're the one that put me there.

(Mary is trying to go off on her own because of Ivy's efforts to reach her.)
Alice: Stop! I am supposed to be the crazy one!
Mary: You're not the one with a bitch of a migraine that only seems to stop bitching when I go... this way!
Alice: If you go that way, you'll probably die! The O.G.'s back? She's trying to draw you to her. Why?
Mary: Uh, do I look like the president of the Poison Ivy fan club?
Alice: I don't know, but I do know that a world with two of a kind never ends well. Why don't you ask poor, boring Beth Kane? Oh, that's right. You can't because she's dead!
Mary: Okay. Then that's why I've been feeling this way? Clearly... w-w-we have some sort of bond, and she's calling out to me. Give me the keys.
Alice: Were you not listening to anything I said?
Mary: I'm going, Alice. This is the woman who unlocked my prowess and the reason why I'm finally happy. The least I can do is go and see what she wants. Please.
Alice: Fine. Let's go meet your maker.

Mary: Why do we work, Alice? You killed my mom, I replaced you in our family, but... here we are on this crazy adventure together. Hmm? Why?
Alice: Probably because you made me drive out to "deliverance" country.
Mary: It's because despite all of our baggage, we both found the sister we always wanted. I see the girl who... just craves her freedom, and I love that you support me to do what I want... And this is what I want.
Alice: (sighs) Okay.

(Sophie watches Luke working out, shirtless, in the middle of their new lair.)
Sophie: Pretty sure in the real world this would be an HR violation of appropriate workplace behavior. Luke: Good thing it's not the real world.

Poison Ivy declares that submerging herself in water is not restoring her strength, like she thought it would.

Ryan visits her adoptive mother's grave, which notes she died in 2015.

Cora Lewis worked three jobs and volunteered at her church while raising Ryan.

Sophie spars with Luke, who seems more determined than ever to get in shape and become a good fighter. She guesses this has something to do with his being man-handled by Marquis Jet in 308.

John Diggle appears for the first time since S612, though it is believed his last chronological appearance in the Arrowverse was in F716. In either case, he has started growing a beard since his last appearance.

John Diggle oversaw Jada Jet's personal security detail at some point when her husband was still alive and they remained friends after.

John Diggle is also implied to be an old flame of Jada Jet, as he tells her he got back together with his wife and had kids and she seems disappointed.

Ryan is still angry at Sophie for sleeping with Montoya and refuses to talk to her directly.

Team Bat presume Poison Ivy is active again based on reports of the two dead fishermen at Loeb Lake, an unnatural hornet attack at a pesticide factory and an oil rig being tipped over. All of these attacks were within a two mile radius of a national park outside Gotham City.

Jada offers Diggle a job as head of her security detail. He turns it down, saying that he only agreed to meet with her because he just happened to be in Gotham City attending to other business.

Diggle agrees to help Jada find Joker's joy buzzer, which she believes might be able to cure Marquis. He suggests, given all the other Batman villain weapons on the street, that all of them were part of a collection, which means the joy buzzer might be out on the street as well.

Diggle says his sources at ARGUS thought Renee Montoya, who works for the Mayor's Offices' Rogue Unit, would be worth consulting about the possibility of a Bat-villain weapons cache.

Poison Ivy reaches out through the plants to send a message to Mary, bringing them together.

Alice tries to talk Mary into leaving Gotham with her to go to Santorini.

Mary describes the sensation of being summoned by Ivy as feeling like brain-freeze when you eat something cold too quickly.

Ryan, Sophie and Luke's van is attacked by vines shortly after they get to the national park.

A random hunter dies after trying to warn Ryan, Sophie and Luke away. They hide in a cabin.

Luke blames himself for the team's current predicament and says it's clear his father didn't give him the Batwing suit because he isn't meant to be a hero.

Ryan says that real heroes screw up all the time and keep going, pointing out that Sophie allowed Alice and Poison Ivy to escape on her watch. Sophie sarcastically agrees, pointing out that for all of Ryan's alleged detective skills, she didn't realize Mary was possessed by Poison Ivy until it was too late.

Poison Ivy confronts Montoya on how Batwoman and her allies seemed to know how to find her. Montoya admits to working with them, but says Ryan is different from Batman. Ivy refuses to believe her and goes off to kill Batwoman.

Jada Jet knows how to pick locks and apparently learned the skill while living on the street in her youth.

Alice makes reference to the Beth Kane doppelganger from 112.

Alice agrees to help Mary find Poison Ivy, but Mary knocks her out so she can go on her own.

Sophie and Ryan continue to argue, but Ryan does thank Sophie for grabbing the Batsuit out of their van before it was destroyed.

Sophie asks Ryan why she's always held a grudge against her and says it goes beyond her treating Ryan badly when she was a convict.

Luke is able to kill the vines that come into the cabin with a mixture of salt and vinegar.

Ryan puts on her Batsuit and makes for a truck they saw earlier that had a bag of salt in the bed.

Diggle and Jada steal he booze out of Montoya's mini-fridge.

Jada has no idea how Ryan tracked her down.

Luke saves a boy, whose father was the hunter killed by Ivy earlier in the episode.

Luke tells his father that he thinks he is ready to be a hero now.

John Diggle meets Luke as his father's grave and says he is sure his dad is proud of him.

Luke returns a box to Diggle and says he couldn't get it open. This is the box Diggle found in a smoking crater in A810.

Diggle says ARGUS couldn't get the box open either, but it opened for him once before.

Luke guesses that whatever makes the box open isn't based on science.

Diggle asks Luke for one more favor - passing on a message to Batwoman from Jada Jet, that she found her fix.

Alice finds Mary's phone and a man's corpse impaled on a tree.

Montoya built up an immunity to Poison Ivy's pheromones by poisoning herself a little each day.

Mary finds Ivy. The two hug and Ivy is rejuvenated.

A national park outside Gotham City.

Granting that they're somewhat desperate, Team Bat going into a national park hunting a villain who manipulates nature with an untested weapon seems incredibly stupid, even for these heroes.

Painfully bad. The "heroes" continue to be as unsympathetic as they are idiotic and the only thing marking the villains as villains is random, unmotivated murders. Not even John Diggle and the promise of his Green Lantern storyline being resolved can make this episode worth watching more than once.