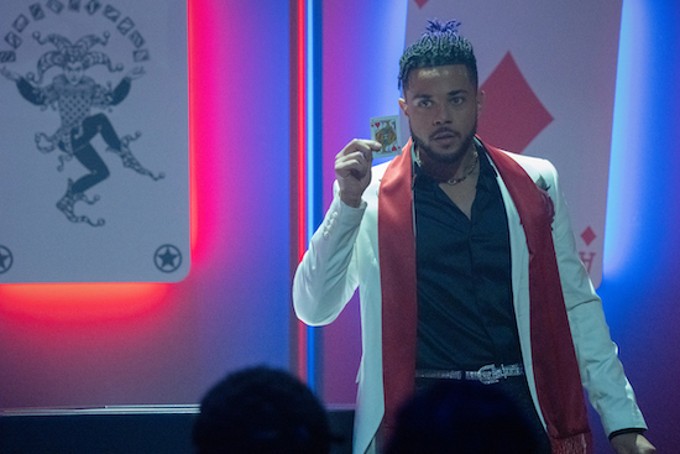 As Alice and Mary go on the lamb and begin to bond, Ryan, Sophie and Luke become more desperate to catch them. Unfortunately, their resources are limited having been locked out of the Batcave. Thankfully, Renee Montoya has an idea that may help end the threat of Poison Ivy and her control over Mary once and for all. Unfortunately, it requires they infiltrate a party Marquis Jett is throwing in Wayne Tower to celebrate his ascension.

The Batman comics of Grant Morrison

The writers seem to forget that Alice and Mary are established as being in Metropolis in their first scene, given how easily Mary gets back to Gotham and how quickly Sophie finds the hotel Alice is staying in. While Gotham and Metropolis are fairly close together in the comics universe, Gotham City in the Arrowverse was previously established as being closer to Chicago than New York City. (Then again, this point has been inconsistent, depending on the show, and Superman and Lois has Metropolis being in the same football league as Smallville, Kansas.)

Once again, the interaction between Nicole Kang and Rachel Skarsten is the high-point of the episode.

The card-themed background for Marquis' party is memorably eye-catching.

The original title of this episode was True Destiny.

As Poison Ivy notes, in the language of flowers, white tulips are given as an apology as they symbolize forgieness.

The acrobats at Marquis' party wear Harlequin masks. Coupled with the black and red card decorations, this seems to be a nod to Harley Quinn.

Marquis questions Luke as to whether or not his costume has a portal access point. In the comics, the Batwing suit does have such a function.

Montoya explains that Batman created a desiccation serum that mimicked the process a plant undergoes when it is denied water and sunlight to disable Poison Ivy. He also created a special device to inject the serum, which is coded to it in such a way that it can also be used to extract the serum.

Luke outfits Ryan's mask for the party with ocular mesh scanners from the Batsuit.

(Mary has just discovered her credit cards don't work.)
Mary: Did the Bat bitches cut me off?
Alice: All your fancy degrees, and you didn't see that coming?
Mary: I thought we were past this. I mean, one would think that nearly vine-squeezing the life out of your bestie and then crushing the only cure for you in existence was a pretty good indicator that it was time to move on from the friendship. Anyone else find it ironic that when I beg Ryan and Luke for their attention they're too busy with their own drama, but then when I finally step away for some much-needed me time, Mary Hamilton is the coveted Batmission of the week?
Alice: If this is a lecture on being Batwoman's most wanted, trust me, I already took the exam.

Ivy: Are you coming with me or not?
Montoya: Not if you go where I can't follow you. Stay here. Stay the... Quirky, brilliant scientist who loves reading and baseball that I fell in love with a decade ago.
Ivy: She's gone. She's blossomed into someone who can stand up for herself and, more importantly, for those things that can't.

(Mary downs a flute of champenge. Alice emerges from the bedroom of their suite.)
Alice: I've been in the bedroom trying to finagle my way out of Sophie's handcuffs, and you've been in here drinking all the Dom?
Mary: (distant) Ryan had me beat. She was about to inject me with something, and then she hesitated. Whatever she was about to do to me scared her.
Alice: Don't tell you're getting the conscience tingles.
Mary: Before I even knew what was happening, she used the syringe on Marquis. I don't know if it was to save Luke or protect her secret. But all I know is in that moment, I was the least of her problems.
Alice: She still underestimates you.
Mary: I know it's silly, but a part of me just wanted her to see me as powerful.
Alice: Do you know all those looney tune delusions I've been having? Postcards from Dad, imaginary friends, walking in on Sophie in the shower?
Mary: That last one happened.
Alice: (blinks) Oh. Anyway, since your whole Poison Mary metamorphosis, I have yet to have a single delusional thought, which means baby-sitting you, my dear, has made me less of a crazy person, and if that's not powerful, I don't know what is.
(The two hug.)

In 2011, Renee Montya was still a GCPD beat cop, whose partner was killed by Poison Ivy because she couldn't bring herself to shoot her.

Alice and Mary rack up an $8000 bill at a Metropolis hotel and are unable to pay for it, thanks to Luke cutting off Mary's credit cards. Thankfully, Mary's "Ivy" powers allow her to pacify the hotel manager.

Montoya recalls meeting with Pamela Isley and begging her to give up being Poison Ivy after her partner died. She refused, saying she was no longer the quirky scientist who liked reading and baseball that she fell for 10 years earlier.

Ryan identifies the rancid smell in the temporary Batcave as a dead rat in the wall.

Montoya says the only way she think of stopping Mary is to use the formula Batman developed to incapacitate Poison Ivy. She has the device Batman used to dispense the formula, but the only dose of it is still in Ivy. This means that, in order to replicate the formula, they have to find Poison Ivy's body.

Everybody except Ryan votes to go with Montoya's plan

Luke says their best bet to finding Ivy's resting place is consulting Bruce Wayne's Batman journals, which are located in the Batcave.

Montoya became a GCPD Detective in 2013.

Montoya did not know that Bruce Wayne was Batman.

Marquis calls Ryan to thank her for trying to freeze him instead of having him sent to Arkham. During the call, it is made apparent that he's planning a party. This leads Ryan to suggest crashing it as part of Montoya's plan.

Luke's cover identity for the party is Spencer Glad, a former Olympic athlete rumored to be the next owner of the Gotham Knights.

Sophie's cover identity for th party is Cecilia Langley, a world traveler and heiress to a whiskey fortune.

Ryan's cover identity is Penelope Devereaux, who runs a board game empire and is French.

All these cover identities are real people, whom Luke was able to uninvite from the party.

Each person attending Marquis' party is given a playing card as part of a game. Marquis calls each guest up by picking a card, and electrocutes everyone who gives the wrong answers to the questions he asks.

Luke swipes a SIM card from one of the workers' tablets and Sophie gets Marquis' thumbprint from a glass.  This leaves it to Ryan to meet him, face to face, to scan his retinal pattern with her mask.

Montoya confirms that all the Batman trophies, except for Joker's joy-buzzer, have been accounted for.

Mary attends the party and flirts with Marquis.

Montoya recalls how she met with Poison Ivy, pretending to want to join her, so that she could inject her with the desiccation solution.

Ryan figures out, based on Bruce Wayne's journal where he discussed needing to bury Poison Ivy somewhere no one would look for her but where he could get to her if needed, that he must have buried her in the deepest part of the Batcave and that's why there's a tree in the middle of it.

Gotham City has rain 300 days out of the year.

Sophie gets a credit card fraud alert on her phone as they search for Poison Ivy. It does not occur to her until later that her card was stolen and she realizes it must have been taken by Alice.

Ryan recovers the Batsuit and uses it to track Poison Ivy's heartbeat.

Luke spots Mary at the part and tries to confront her.

Mary tells Marquis that Ryan is Batwoman and Luke is Batwing.

Once the serum is extracted, Ryan returns to the party to inject it into Mary.

Sophie leaves Montoya with Poison Ivy when she realizes that Alice has her credit card.

Alice tells Sophie that she needed to get her alone and reveals that Montoya has been manipulating them all from the beginning. For proof, she tells her to check out Montoya's office and check the second drawer down in her left filing cabinet.

Ryan confronts Mary, but is forced to let her go after Marquis takes Luke hostage.

Ryan uses the desiccation weapon to take down Marquis as Mary makes her escape.

Montoya apologizes to Poison Ivy's body for betraying her. A white tulip blooms near her, revealing that she can hear Montoya on some level.

Sophie breaks into Montoya's office and searches the drawer Alice told her to look at. She discovers the Joker's joy-buzzer.

Luke and Ryan set Marquis up on life-support in Mary's clinic.

Ryan calls Jada Jet as Batwoman and tells her that she has her son, safe.

Sophie calls Ryan and tells her that Montoya manipulated them to find Poison Ivy's body so she could being her back.

Luke accidentally reveals Bruce Wayne's secret identity to Montoya by discussing his Batman journals in front of her.

Again, it must be noted that Sophie is not a very good detective and that she had no idea Alice stole her credit card until Alice intentionally used it to try and get Sophie's attention. She also left a handcuffed Alice unattended and somehow didn't guess that she'd try to escape or would be capable of escaping.

An underwhelming episode that can't be bothered to keep track of what city half its cast are in. A bigger problem is that Marquis' status as "the new Joker" is completely unearned and distracts away from the far more interesting Poison Mary and the idea of Montoya as the true criminal mastermind of the season.