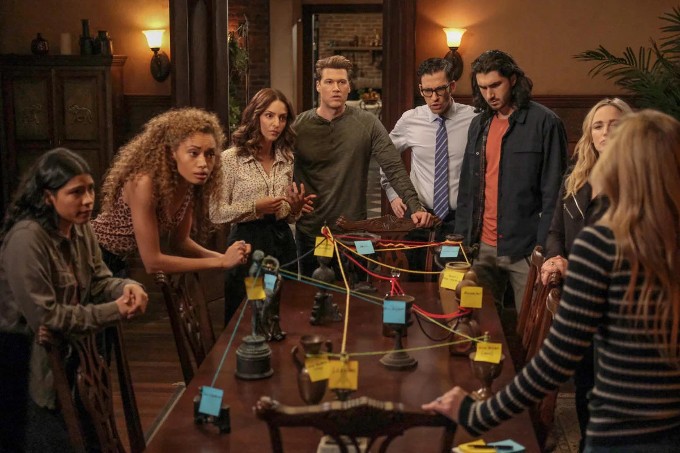 When Gideon jumps the time machine into John Constantine's manor, the team find themselves trapped in a hellish reality show. With the rest of the team's emotions running wild thanks to the dark influence of a damned film crew, it will fall to Astra to try and save the team as Behrad tries to express his feelings for the sorceress without making a big production out of it.

Reality TV in general, with specific shout-outs to Keeping Up With The Kardashians, Survivor, Real Housewives, Big Brother, Naked and Afraid, The Real World and Jersey Shore.

All the cast are on fire here playing reality show stereotypes.

The direction does a great job of capturing the feeling of a cheesy reality show.

This is the first episode of any Arrowverse series since Crisis on Infinite Earths set outside of Earth-Prime.

The episode features a unique title card sequence, with

The logo for the demonic LCD network is modeled on The CW logo.

Astra knows a spell that can reveal the presence of hidden spirits. She uses this to reveal the Cursed Crew to the rest of the Legends.

(Gary watches Gideon eat an apple seductively.)
Gary: Is it getting hot in here, or is it just me?
Gideon: Well, if you're referring to the increasing temperature in the house, - you're correct.
Gary: (disappointed) Oh.
Gideon: If you're insinuating we should go upstairs and fool around, also correct.
(Both start giggling and run for the staircase.)

(The other Legends discover Gideon and Gary in bed.)
Spooner: All right. Well, how long has this been going on?
Gideon: Uh, well, including the foreplay, approximately...
(All the other Legends moan, grossed out.)

Nate: Look, just when you think you can trust a woman, she turns around and shows her true self. That's why you can't trust dames. You can only trust... gains. (flexes for the camera.)

Ava: Oh, no. I'm turning into the implanted memories of my mother.

Spooner: They both make good points, but just know that whichever alliance I join, I promise I will betray it

Behrad: You guys want to make asses of yourselves for the cameras? Is that what you want?  Because I know what it gets you. I have countless memories of cameras in my face, every time I was scared! Every time I cried! You want to know about the first time I ever failed? Don't worry. "Keeping Up With The Tarazis" had a whole episode about it! I figured out the way to beat it was to be unflappable, chill. Pop a gummy, lay low, relax. If they don't see it get to you, they don't have the power. But... it gets to me. A lot of things do. I'm sad sometimes. I'm scared a lot. I died, and I never talked about it! Because maybe I'm afraid if I'm honest with anyone, they'll end up hating me. (To Astra) All I wanted to do was ask you out, and now I'm crying for all of hell to see and laugh at me... for my friends to realize they never knew the real me... And for the girl I like to run far away from me. But I'm done now. Here's the honest truth. When it comes to you, Astra... I lose all my cool.  I'm just B.

Gideon: It's quite nice feeling emotional again. It's like a warm and gooey feeling as opposed to a cold and calculated urge to murder.
(There is an uncomfortable silence.)
Nate: Say what?
Gideon: I'm just kidding. I'm quite funny, actually.
(Everyone laughs as Gary and Gideon hug.)
Sara: So funny. But, hey, since you are a part of this team and a supercomputer, so you tell us, where do you think we should go?
Gideon: I'm glad you asked, Captain, because I've given it much tactical and emotional consideration, and I think I want to trust my gut, as us humans say, and my gut is telling me to plot a course for Sarajevo in 1914. We need to save Archduke Franz Ferdinand and stop World War I.
(Everyone except Gideon laughs. They all slowly stop as they realize Gideon was serious.)
All But Gideon: What?!

The episode picks up immediately after the team's escape in 707, with the time machine taking the Legends into the Hell Mansion.

Gary guesses that the time machine took them to the Hell mansion since Gideon thought of it as being her "home" when the other Legends told her to take them home.

Gwyn hears the voice of his lost love Alun coming from outside the mansion. He opens the door, which allows something into the mansion.

Gideon has a fever and isn't feeling well after the last jump. She tells Gary she thought she did well to take the team to the Hell Mansion but everyone is obviously disappointed in her.

Gary and Gideon decide to go upstairs and fool around.

Behrad tells Zari 2.0 and Nate that he wants to ask Astra out.

Behrad says he hasn't smoked weed or done edibles since they became lost in time.

Nate says that he considers Zari 2.0 his best bud, now that Behrad is practically his brother-in-law.

Gwyn informs the rest of the Legends that he thinks he let something into the mansion. They split up to search for it.

Nate and Zari 2.0 are sprayed with some kind of gross magic goo and are forced to take their shirts off while exploring the attic.

Nate winds up wearing a white shirt that makes him look like John Constantine.

Zari 2.0 winds up in a flannel shirt that makes her look like Zari 1.0.

Nate and Zari figure out something is altering their minds to try and bring them together.

Sara and Ava discover Gary and Gideon in bed together. Soon the rest of the team run in and discover the two have been lovers since 706.

Gary is blamed for making Gideon too unfocused to time-travel properly.

After Zari says this all seems like a bad reality show, Astra identifies the spirits in the house as The Cursed Crew - a ghostly reality show production crew from the 1990s who were cursed to film footage for the hellish network of a demon named Harris Ledes, until they captured some truly real emotion.

Zari says the Cursed Crew cam twist emotions and amplify conflict, creating petty drama for the amusement of their audience.

Astra leaves the mansion to confront Harris and get him to back off. She tells the rest of the Legends not to give in to their emotions while she is gone.

Zari 2.0 had a reality show as a child celebrity, Keeping Up With The Tarazis. Behrad was recast on it after refusing to appear on camera.

Gwyn asks Spooner to explain just what reality television is to him. Instead, Spooner tells him to stick with her, staying they can form an alliance and that she watched all 40 seasons of Survivor.

As Ava and Sara start trying to get back to thinking of a plan to fight Evil Gideon, Sara becomes obsessed with planning the ultimate beach-themed honeymoon.

Gwyn pushes Sara to discuss a plan to save Alun. Sara shrugs him off, but writes him an IOU promising to help him save one person at any point in the timeline.

Spooner begins wandering around the house naked as a strategy, saying everyone trusts the naked person, because they can't hide anything.

Astra and Harris Ledes know each other from Astra's time in Hell.

Astra tries to get Harris to back off, claiming the souls of the Legends are hers to play with. He is content to do so, until Behrad is caught in the lobby of LCD Productions.

After Astra refuses to "piddle" Behrad, Harris realizes she's become mortal and is now fair game for any demon to play with her.

Harris tries to discover Behrad's deepest darkest secrets but is saddened to find he has none.

Astra thinks Behrad followed her because he thought she was too weak to go solo or was going to backslide into being a demon.

The Cursed Crew cause Gideon to dump Gary and to start acting like a cool, emotionless manipulator.

Gary's human form is shown to have three nipples, as first mentioned in 415.

Gideon manipulates Zari 2.0 into thinking the reason Nate is acting so weird to her is because he really doesn't want to move in with Zari 1.0.

Gideon alter tells Nate that Zari 2.0 said his Zari was ugly and is better than her, as Nate starts working-out and bronzing his skin.

Gideon manipulated Gwyn into considering that he might use his "one saved life" voucher to save more than one person.

Sara ignores all the drama in favor of planning a trip to Cabo.

At dinner that night, Gwyn says a blessing, which is bleeped out by the Cursed Crew.

Gwyn asks to use his voucher to save Archduke Franz Ferdinand and prevent World War I.

Ava gets angry at Sara for making a promise that could endanger the timeline.

Zari 1.0 is brought out of the totem in the middle of the fight and joins in.

After Gideon offers to take everyone out of Hell, Gary eats the time machine interface so it can't be used.

Behrad opens up to the other Legends about hiding who he really is, playing a chill stoner that everyone liked. This frees the Cursed Crew from their curse and saves everyone.

Sara agrees to take on more responsibility as co-Captain, saying it isn't fair for Ava to play the house mom.

Gwyn apologies for pushing Sara on the idea of averting World War I. Sara accepts the apology and promises to save Alun.

The Zaris and Nate work things out.

Astra and Behrad agree to take it slow, since Behrad is still figuring out who he is sober.

Gary tells everyone off for assuming that Gideon can't make her own decisions and that he corrupted her somehow. Gideon agrees, saying it is hypocritical given how almost everyone else on the team found love with someone else, so why not them?

Everyone apologizes and says they are fine with Gary and Gideon dating.

Gideon says their next step should be averting World War I.

A hilarious bottle episode which masterfully sends up reality TV.