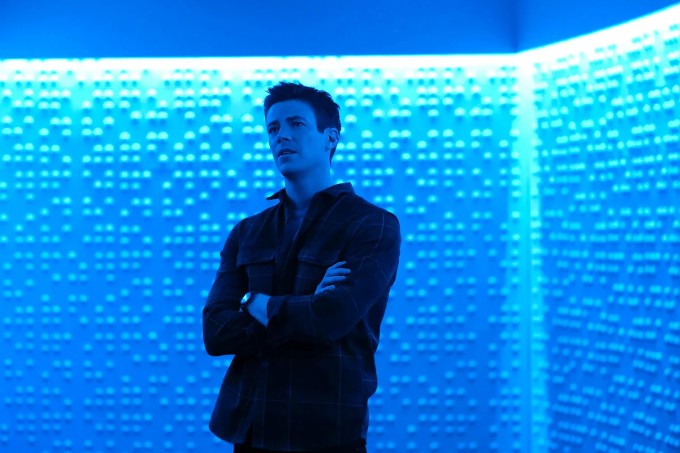 Deathstorm attacks each member of Team Flash individually, confronting them as their dead loved ones to feed on their grief and claim Caitlin as his bride.

For all their talk earlier in the season about not killing, Team Flash is surprisingly eager to "snuff out" Deathstorm.

Caitlin tries to treat Frost's cardiac arrest with a defibrillator, despite her problem being a slowed heart rate. (Defibrillators are used for restoring a natural rhythm when

Jon Cor and Danielle Panabaker have great chemistry as Frost and Chillblaine.

At one point the fake Eddie Thawne mentions an uncle Robern. In the comics, Robern Thawne was the brother of Eobard Thawne, the Reverse-Flash.

Deathstorm makes reference to being born before Maltus. In the DC Universe, Maltus was the home of the first sentient life and eventually gave rise to the Guardians of the Universe.

The lightning at the end of the episode is tinged blue, in Frost's honor.

Deathstorm is made up of pure thermodynamic energy, so Team Flash use the Mental Augmentation Chamber to harness particles from its home dimension and then beam them into Frost's consciousness. The reaction should transform her into a being like Deathstorm. who can create fire, defy gravity, and consume Deathstorm's fuel source.

Chester makes reference to the cryo-circuits of the MAC.

The walls and door of Chester's lab are made of titanium.

Chester notes that blood flow starts to decrease in a human body at 105 degrees Fahrenheit. Organs fail and brain function slows at 107.  At 109, the body will die to end its suffering.

The MAC makes use of augmentation receptors.

Caitlin tries to save Frost by injecting her with cold fusion.

Eddie: I thought my sacrifice would mean something. That I could erase the Reverse Flash from existence. That, finally, I could be a hero. But then Eobard Thawne came back, again, and again, and again, and again. What I did didn't matter at all. I died for nothing, and now you've made the same mistake. You sacrificed yourself for nothing.
Iris: I saved Barry, and I helped stop Armageddon.
Eddie: And then, what happened? The timeline got reset, but you're still suffering the consequences. Can't you see? Your death is gonna be just as pointless as mine.

Frost: Boy, was I stupid for ever thinking that was possible, because it doesn't matter. Doesn't matter how many life coaches I get, or if I get my own body, or do a bunch of art, or get my own boyfriend, because I'll always just be a copy of the original. An echo. 'Cause I've never been really alive. And now, that's gonna get Caity killed.
Chillblaine: Frost... If you are not really alive, where does that leave me? You're the only person I've ever cared about more than myself, or at least equal to myself.
Frost: I guess we're both screwed up then.
Chillblaine: Yeah, that's definitely true. Look, the way I see it, you and I have been through a lot, right? And through all of those ups and downs, I, for one, have seen you have loads of emotions-- all kinds-- especially when it comes to Caitlin. You love your sister like crazy. And wherever that love came from-- you know, whether you were born with it, or your dad gave it to you, or you put it together yourself over time, built it with pain and heartache-- that love is as real as it gets. Believe me.

The episode begins later the same evening as 812.

Central City is still under a city-wide curfew.

Chester confirms that he spent six weeks living in the Mental Augmentation Chamber during Season 6.

Cecile says that Caitlin's biometrics are stable, but she can feel her grief intensifying.

Caitlin says she keeps having visions of her father's death from 519.

Frost calls Chillblaine in to help.

The power in STAR Labs goes out, as Chester is finishing the upgrades on the MAC.

Barry has Gideon working on identifying the cause of Iris' time sickness.

Allegra is confronted by an illusion of Ultraviolet.

Chester is confronted by an illusion of his father.

Barry is confronted by an illusion of his mother, Nora Allen.

Frost is confronted by an illusion of Ronnie Raymond.

The fake Ronnie tells Frost that he isn't appearing to her as anyone she knows because her grief isn't real. He claims that all her feelings are just echoes of Caitlin's and that she isn't really a person.

Allegra and Chester seal themselves in Chester's lab to escape from Ultraviolet. Unfortunately, she fries the temperature controls and the heat starts building up.

The fake Nora tells Barry that there's no cure for Iris and that he is doomed to lose her forever.

The fake Eddie offers to make Iris some of his Uncle Robern's famous chicken noodle soup.

The fake Eddie is able to burn Iris and Sue when they try to go for the exit and their phone respectively.

Cecile tells Frost that Caitlin's vitals are spiking and her temperature is going up. She can also feel the team's grief and says it is being channeled into Caitlin.

Chillblaine broke into Fast Track Labs to get Frost the cryo-circut needed to compete the modified MAC.

The thermostat in Chester's lab burns out at 137 degrees Fahrenheit.

The fake Nora taunts Barry with the knowledge that if Iris dies, Bart and Nora will never exist either. She also says that his real legacy is heartbreak, rather than heroism.

The fake Eddie torments Iris with how pointless his death was since it didn't really stop the Reverse-Flash.

Sue was able to use her phone to summon Joe while Deathstorm was focused on Iris.

Deathstorm is able to incapacitate Sue with images of her grandmother and Joe of his former partner, Chyre.

The MAC fails to transform Frost. At first, Frost thinks this is because she doesn't have a true consciousness to manipulate, but Chilblaine figures out the chemical reaction is missing one key ingredient to fuel the transformation - grief. Once Frost allows herself to grieve, she transforms.

Frost's earliest memory is of Caitlin being hit by a car as a child.

Frost calls her new form Hellfrost. She has black hair instead of white.

Frost uses HR's image inducer to make herself look like Caitlin to lure Deathstorm in.

Frost is able to kill Deathstorm, but her vitals crash just after she transforms back to her normal self.

Caitlin tries to save her, despite having just gotten out of a coma herself.

The final scene has Caitlin and Barry entering the lounge in silence, with everyone's reactions suggesting that Frost died.

Frost is killed purely to give the team angst and make Caitlin look incompetent for failing to save her.

Some of the best moments of The Flash Season 8 have centered around Frost and her development, so naturally the showrunners have to put a stop that by killing her off, in an episode that seems to be both full of padding and yet underdeveloped in equal measure.