Legends of Tomorrow: Season 7, Episode 12 - Too Legit To Quit 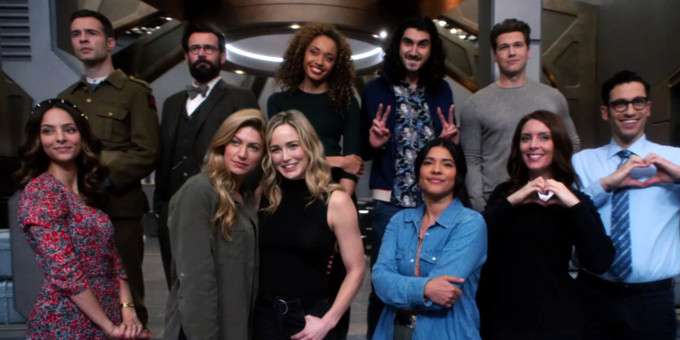 With Gideon wounded, the Legends are forced to bargain with Evil Gideon to save her life. Eventually, an uneasy peace is reached, but can the Legends really retire and condemn Gideon to a lonely life as the last Time Master?  More, can they trust Evil Gideon to keep her word about letting them live if they agree to go back to their proper times?

Adam Tsekhman is often overlooked due to his playing the fool, but this episode gives him a chance to showcase how Gary Green became the quiet heart of the Legends and his heartbreak in the final scenes is tangible. If this is his swan song, it's a hell of a note to go out on.

The montage of the Legends seeing their futures, set to Behrad's first hit song, is a beautiful thing.

The episode title is taken from an MC Hammer song.

When the Legends are discussing a regular time to meet each week, Wednesdays at 8 PM are suggested. This was the timeslot the series held during Season 7, at the time this episode aired.  Another suggested time, Sundays at 9 PM, was the series' previous time slot during Season 6.

Protocol 276 is a Time Master rule which prohibits a Time Master AI from self-destructing under any circumstance. Gideon is able to invoke this to prevent Evil Gideon from allowing her to die.

Astra is able to use a spell, Multiplicare, to create multiple copies of a bag of peanuts to feed the team.  She later uses this same spell to copy the keys to John Constantine's mansion in Hell.

The Waverider jumpships will not work if Gideon is off-line.

Spooner has apparently refined her powers to where she can sense the emotions of humans, as she says she can feel Astra's anger from across the room at one point.

(On the two Gideons talking.)
Behrad: Must be weird talking to someone who is you, but also not you at the same time.
Zari 2.0: Mm, can confirm.

Spooner: Thank you for threatening to blow this place up for me.
Astra: That's what best friends are for.

Nate: Hey, you must be excited to have your own bathroom after sharing one for three years.
Zari 2.0: Three years, wow. I guess I thought there'd be more time.
Nate: More time for... more time for what?
Zari 2.0: To be a hero, I guess. It's hard... living in other Zari's shadow. I mean, she changed the world. She... she mattered.
Nate: Come on. You matter. You matter a lot.
Zari 2.0: Yeah, maybe to trend watchers waiting to hear about this year's hot nail trend or whatever audible lipstick is.
Nate: Yes, you are a fashion icon, all right? But you're also a champion of doing the right thing. Do you remember Eddie? You saved his bar.
Zari 2.0: I was just being helpful, not heroic.
Nate: My father, he was very big on legacy, and so was I for a while, but after years of hero-ing through time, do you know how I'm going to be remembered? For writing a book about other people. My legacy, however, my legacy is the life I get to make with Zari.

Gary: So, for our first course, we'll be having creme de la voilalle a la Berchoux.
Gideon: What is that?
Gary: I don't know. I asked Gideon to make something fancy and French, and voilà.
Gideon: Ooh, so talented.
Evil Gideon: Why are you lying, Gideon? You know what it is.
Gary: You do?
Gideon: Well, yes. Creme de la voilalle a la Berchoux is a creamy chicken soup with a lemon flavor named for French poet Joseph Berchoux, the man responsible for inventing the word gastronomy.
Gary: Huh. So then... why'd you... why'd you lie?
Gideon: Well, I just didn't want to hurt your feelings, Gary, by making you feel dumb.
Gary: Oh, no. Never dim your light to make me feel better. Just don't lie.
Gideon: (suddenly) Alun is a robot!
Gary: What?
Gideon: I went back to 1916, harvested his DNA, and printed a robot Alun. Then I used Gwyn's diaries from the historical records to recreate his personality.
Gary: Why would you do that?
Gideon: Look, I intended to save Alun, but then I discovered that Alun's death is a fixed point. Ava and Zari were trying to go back to save him. They would've been killed. It was the only thing I could do to keep the Legends and the timeline safe.
Gary: By lying to Gwyn? By lying to all of us?
Gideon: They can't know. They're Legends. They'd break time before they break his heart. Do you hate me?
Gary: What? No, no, of course not. I just... I, uh... I need some time to think.
Gideon: To think about what?
Gary: Well, if these are the kinds of decisions you have to make... I don't think I'm cut out for this.

The episode continues from where 711 ended, with Gideon having been stabbed by the Robo-Astra.

Evil Gideon is reactivated because the medical bay computers will not work without her.

Evil Gideon tries to drain all the oxygen from the ship to kill the Legends, but stops after learning of the existence of Gideon.

When rewiring Gideon, Zari didn't restore power to the lab. This gives them one safe room where Evil Gideon cannot try to kill them.

Gideon tries to reason with Evil Gideon, eventually persuading her to take the Legends back to their proper time periods and let them live in peace if they agree to stop being superheroes.

When the Legends are skeptical on agreeing to this deal, Evil Gideon agrees to let them see something of their futures if they retire now.

Nate reveals that he still had a depowered Time Courier. Unfortunately, the charger is in the armory.

As the Legends take turns seeing their futures, Spooner is sent to crawl through the ducts to the armory, where she can charge the Time Courier.

Zari 2.0 learns that she's destined to win an award for being Influencer of the Decade and goes on to make $45 billion after her make-up line starts selling audible lipstick. She is allowed to see a clip of her acceptance speech and a magazine cover with her picture on it.

Behrad becomes a children's show host and a best-selling children's musician. He is allowed to see the cover of his first album and a clip of his show.

Astra goes into politics and runs for President of the United States in 2040 as a progressive reformer. She is allowed to see one of her campaign ads and a button from her campaign.

Gwyn is shown a photo of the farm where he's destined to live out the rest of his life in peace. Unfortunately, he won't be allowed to save Alun.

Nate becomes a successful author, writing a book about his experiences as a superhero and all the other heroes he worked with and historical figures he met. The book is titled Hero Moments, but he is only allowed too know the title and see the cover and an interview he did regarding the book.

Sara and Ava are allowed to watch a video of a young girl who is apparently their adopted daughter.

Astra shape-shifts into Spooner, as Spooner is still in the ducts when it comes her turn.

Astra learns that Spooner will go back to 1925 and live out the rest of her life with her mother, establishing an apothecary/clinic that will become a mental healing milestone. Unfortunately, she will never be able to see her friends again.

Spooner accidentally sets off an alarm when she finally gets to the armory. Evil Gideon declares the truce broken and tries to flush her into the Temporal Zone. She only relents after Astra threatens to blow up the safety glass separating them from the armory, which will kill her and Gideon along with Spooner.

Gideon negotiates a new peace with Evil Gideon, agreeing to become the new Captain of the new Waverider if she spares the Legends.

The Legends throw a retirement party, with a Beebo piñata before they go on to their new lives.

Astra copies the key to Constantine's mansion so the team can continue to meet outside of time, just to socialize.

Ava and Sara discuss trying to change their future by adopting six boys, but both agree that they want a daughter.

Gary tells Gideon that he loves her.

Gideon asks Gary to stay with her.

Behrad and Astra agree to try and make their relationship work, despite the distance and time issues.

Nate and Zari 2.0 discuss how they both already miss the idea of being heroes even if they do go on to become successful.

Gwyn tells Ava that he's been informed that he can't be with Alun but he hopes to see him in the next world.

Ava grabs Zari and they start working on a way to save Alun with the time courier so Gwyn doesn't have to spend the rest of his life alone.

Gideon figures out that they are up to something and leaves in the jump-ship.

Ava and Zari plan to jump to 1916, create a dust storm with the wind totem, leave behind Alun's dog tags, and bring him back to the Waverider.

Zari realizers there is a charger compatible with the Time Courier in the bathroom because Robo-Nate needed it for his hair-care products.

Gideon arrives with Alun, claiming that she made the trip to save him and prevent the rest of the Legends from risking their happy endings to do it.

Gwyn asks Alun about their saying and he doesn't remember it.

The Legends take one photo together before going off to their respective futures.

Gary tries to set up a romantic French dinner for himself and Gideon for their first proper date.

Gideon confesses that she created an Alun robot to prevent the Legends from getting killed trying to save him because his death is a fixed point. This is why it didn't remember any private conversations between Gwyn and Alun - it was modeled on DNA and Gwyn's diaries.

Gary decides to stay because he makes Gideon more human.

Gwyn pulls the plug on the Alun robot and gets ready to use his time machine to try and save the real Alun.

A powerful episode that might set up a fitting end for the series... if this is the end. Somehow, I doubt it, but it would be a fine way to setup the finale if it is.