Legends of Tomorrow: Season 7, Episode 4 - Speakeasy Does It 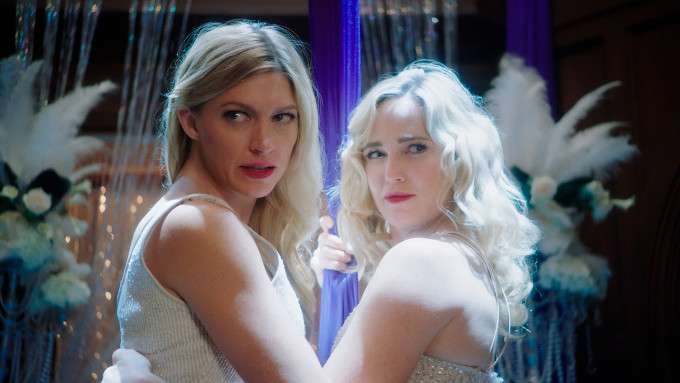 Plot
The Legends arrive in Chicago and come across a speakeasy. Naturally, being the Legends, they accidentally cause the place to get smashed up. This leads Zari to set up a party, with a special performance by the Bullet Blondes, to raise the money to rebuild it. Coincidentally, Astra, Spooner and Gideon also arrive in Chicago, but find themselves tasked with helping a female musician free herself from her mobster boyfriend.

Influences
The musical Chicago and gangster movies in general.

The sign on the door of the Chapeaux places the events of this episode as occurring sometime during between the 3rd and the 9th of a month where Monday fell on the 24th. This suggests this episode takes place in early August 1925, which matches the suggestion that the events of 701 took place on July 9th. However, this still wildly conflicts with Gideon's claim that November 7th was two weeks away in 702.

Caity Lotz is a well known dancer, but Jes Macallan does a fine job keeping up with her in the Bullet Blonde's burlesque number.

The musical numbers in this episode are amazing and the editing between Gideon's singing, Sara and Ava's dance and the fight scenes is flawless.

Susie: Men don't look out, they look at, if you know what I mean.
Gideon: You're referring to the rampant commodification of females by males that is a societal norm of this decade.
(There's an awkward silence, but Susie smiles.)
Susie: You talk funny. I like it.

Zari: Aves, we can't keep leaving the timeline worse than we found it. This place is one of the few safe spaces that exist in this entire crummy time period. I'm not gonna be able to sleep knowing we had a hand in destroying it, are you?

Zari: Gary, I need you to make sure the silks are secure. We can't have it falling down during the big show, yeah?
Gary: Absolutely, Zari. And can I just say, I think you're doing a fantastic job leading us on this mission.
Zari: I know.
(Zari walks off. Nate observes this exchange and walks over to Gary.)
Nate: It's pathological with you, isn't it?
Gary: What are you talking about?
Nate: You have a crush on Zari.
Gary: What, no!
Nate: Gary. You know what's happening here. It's not a real crush. Zari's triggering your attraction to powerful people. Think about it, Kayla, Ava, John...
Gary: Shh! She might hear you.
Nate: You get off being bossed around, you little sicko.
Gary: You're just figuring this out now?
Nate: Gary, don't you want to be with someone who respects you for the alien you are?
Gary: No, not really.
Nate: I'm worried about you, Gare.
Gary: I'm worried about you, too, but I don't go around shaming your pathology, do I?
Nate: My pathology? What pathology?
Gary: That you find yourself in these relationships that can't go anywhere. So you don't have to put yourself in the vulnerable position of really giving yourself to another person because you have the excuse of timelines or totems holding you back.
Nate: What?!

(Sara and Ava end their dance routine by kissing passionately. The crowd is stunned.)
Sara: We're not sisters.
(The crowd suddenly starts cheering and applauding.)

Gary's generous tipping winds up nearly bankrupting the Legends, leaving them with $35. By Ava's estimate, that's barely enough for one person to take the train from Chicago to New York City, allowing for meals.

Zari, Ava and Sara go into a ladies' wig shop to find a disguise. The clerk ignores Zari completely.

Ava and Sara retrieve a brunette and redhead wig respectively. However, they're forced to pay triple the wholesale rate when the clerk recognizes them as the Bullet Blondes.

While trying to find a door to use the mansion key, the Legends stumble across a speakeasy called The Sapphire String. It is run by a Black man named Eddie and the password to get in is "password."

Nate notes that most speakeasies were segregated, but the Sapphire String caters to everyone.

Behrad joins the house band in a jam session after being loaned a guitar.

Astra, Spooner and Gideon sneak onto a train heading to Chicago. They are almost kicked off, but they are saved by a woman named Maude Beaumont, who lies and says they are with her band, after name-dropping her boyfriend - a notorious gangster named Ross Bottoni.

The news reports in Chicago confirm that there is a new robot posing as J. Edgar Hoover and he is said to be chasing after Al Capone and the Bullet Blondes.

Sara has the idea to offer the infinite whiskey in the mansion dimension to Eddie in exchange for access to his store room for a night, 20% of the night's take in cash and no questions asked.
Maude's all-woman band is called The Masquardies. They wear fancy masks when they perform.

One of the other women in the Masquardies is named Susie Spencer. Gideo reveals that she marries a man named Colin Baker, retires to Florida and dies peacefully in her sleep.

Astra lies and says that Gideon is a singer known as the Lark of London, Spooner is her voice coach and that she is her manager. This gets Susie and Maude's attention as women don't typically work as managers in the American theater. (They presume this is how things are done in London.)

Astra offers to look at the contract of the Masquardies' manager, who is described as a glorified bodyguard named Donny.

Eddie notices Zari's smart phone when she uses it as a make-up mirror, but thinks it is an exotic compact.

Eddie knows how to say cheers in several languages and makes Zari a soda water with lemon when she says she doesn't drink.

Astra confronts Donny on his contract and how he's getting 60% of what the Maskeradies make and yet he isn't paying for them to get first class train tickets.

It is revealed that Ross Bottoni was renting the Sapphire String to Eddie with the understanding that he'd only buy liquor from him. This leads Bottoni and his men to smash up the bar after the Legends leave.

Zari insists they have to help Eddie after they find him beaten half to death and Ava agrees to let her take charge for a few hours.

Gary seems to develop a crush on Zari, due to her commanding personality when she's planning a party.

Maude gets a telegram telling her that her boyfriend just got her a new club to play in.

Maude persuades Spooner, Astra and Gideon come and see her perform since their train to New York City won't leave until 8 AM the next day.

Zari hits on the idea of having the Bullet Blondes perform to get people into the one-night-only speakeasy.

The password to get into the speakeasy is Rutabaga.

Ross Bottoni is not pleased when he finds out Donny was fired and tells Maude that he will decide who manages her. He also tells her that a Mr. Williams from RCA will be watching the show that night.

Astra recognizes Ross from her time in Hell. She recalls that his worst fear was being covered with 1000 tiny spiders.

Astra becomes determined to save Maude after Gideon reveals that Maude's body will be found floating in the Chicago River on December 18, 1925.

Nate confronts Gary over his crush on Zari and notes that he seems to get off on being bossed around.

Gary says that he's well aware of that and confronts Nate on his tendency to get into relationships that can't go anywhere so he doesn't have to truly become vulnerable with another person.

Astra encourages Maude to run off where Ross can't find her.

The Hoover robot infiltrates the speakeasy, but Sara and Ava are able to tie him up while making it part of their dance act.

Astra and Spooner are able to pacify Ross Bottoni by playing on his fear.

Astra, Spooner and Gideon hear about the Bullet Blonde's show at the Chapeaux and rush to catch the rest of the Legends.

Nate admits he does need to talk to Zari 1.0 about their relationship. Gary says he'll be there if Nate needs to talk after.

The Legends make the train to New York City, with Gary guarding the key as the rest of the Legends hide in the mansion dimension.

A funny, jazzy episode that could be a contender for one of the 10 best Legends adventures ever.
Posted by Starman at 11:34 AM