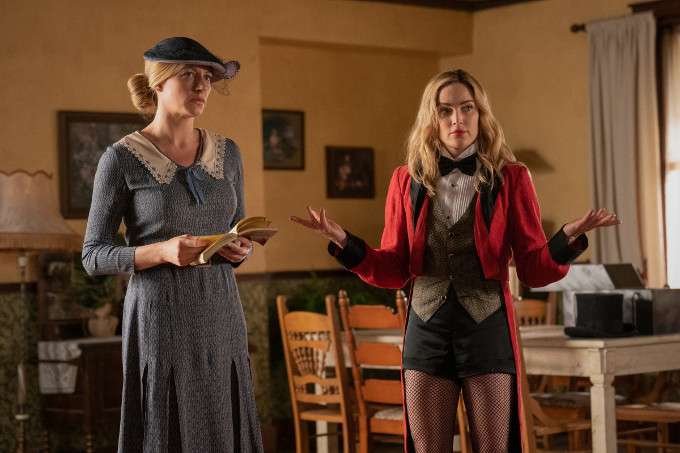 Plot
Stranded in Odessa, Texas in 1925 following the destruction of the Waverider, the Legends turn to Astra's magic for a solution. When this creates unwanted attention and brings the full wrath of J. Edgar Hoover and his Bureau of Investigation down on their heads, Sara and Ava create a distraction by going on a crime spree to lead Hoover away from the rest of the team.

Jess Macallan steals the episode, playing an increasingly manic Ava Sharpe trying not to lose it... until she finally does lose it.

The costumes for this episode are great examples of period dressing.

This episode was the first to feature a new title card, without the intensive opening credits teaser of seasons 5 and 6.

Sara claims to be part of the Guggenheim Circus. This is a nod to longtime Arrowverse producer Marc Guggenheim.

Time Bureau policy is that all time ships must have a Fail-Safe installed - a black box full of emergency supplies, like back up time couriers and mind flashers. Ava had one installed on the Waverider when it was impounded.

Astra remembers John Constantine's tracking spell and uses it to find the Fail-Safe... in the Sheriff's office.

Rule 44 of the Time Bureau code dictates that should a Time Agent become lost in time and in danger of breaking the timeline, they should pretend to be a circus performer, on the grounds that any weird things caused by time travel can be explained away as being part of a circus, no matter where in time you are.

Gary can cast John Constantine's fire-hands spell, but he can't hold it for very long.

Rule 23 of the Time Bureau code says that stranded Time Agents should stay in one location to limit the potential harm to the timeline.

John Constantine's resurrection ritual is specifically keyed to work on people, not objects.

The key John Constantine gave Zari can be used in any lock to create a portal into a replica of John's mansion. The replica is located in Hell, as Nate discovered when he tried exiting through the front door.

Nate: My name's John Edgar Hoover. I'm the newly appointed director of the Bureau of Investigation in Washington, D.C. (nodding to Ava) This is my trusted secretary, Ms. Gandy.
Sheriff: You seem different in real life.
Nate: You probably saw an old photo. I've been cocktailing my hair products. But that's neither here or there.

(Ava is flipping through the Time Bureau Manual.)
Ava: There's an answer in here somewhere.
Sara: It's just a book of rules, babe.
Ava: Rules we should be following, okay? We almost ruined Gloria's life, and we almost interacted with Hoover, which means we almost changed history.
Sara: Yeah, but we didn't, huh? Just... Babe. Hey, will you look at me? I know it feels like the walls are closing in, but we will figure this out.
Ava: You keep saying that. Okay, Sara? But we're getting sloppy. And without memory flashers or time couriers or Gideon to guide us, we are lost, okay?
Sara: And you really think that manual will help?
Ava: Probably not, but I just... I need to. Okay?
Sara: Okay. You keep reading.

(Nate has tried pacifying a woman by telling her they're with the Midland Gang. As she sees Sara and Ava inside robbing the bank...)
Woman: Two women? There's no women in the Midland Gang. You can steal money from a bank, fine. But you don't steal somebody's gang name!
Nate: All right, lady, look, we don't have a gang name. Okay?
Woman: Well, gotta have a gang name. It's patriotic!

Ava: (losing it) The timeline? The timeline is ruined. History is ruined, and we don't even have Gideon here to tell us how badly we've ruined it. That's it. I want to die. (Ava lies down in the middle of the road.) Goodbye. I give up. Goodbye, goodbye, goodbye. Goodbye!

(Ava makes orders Gary to eat J. Edgar Hoover's corpse.)
Gary: I swear I take no pleasure in this. Beyond just the taste of human meat, which as you know, I find... quite delicious.

Astra: So you're just gonna bury the pieces of the Waverider?
Spooner: Well, it ain't gonna bury itself.
Astra: I'm gonna miss the old girl.
Spooner: Really? Astra Logue getting sentimental.
Astra: Look, I'm sorry I brought the cops to your mom's place. I don't blame you for being pissed about it.
Spooner: No, I get it. You were trying to help.
Astra: I wasn't just trying to help you, though. I was trying to prove myself to replace John. I just wanted to show everyone that I was worthy, which I guess I'm not.
Spooner: John? We don't need another John. We need you. Astra, I wasn't mad about the cops. I wasn't happy about them, but I was upset that you almost died. I like having you around. You're like my best friend.
Astra: No one's ever said that to me. But you're mine too.
Spooner: Good. And if anything goes wrong, we'll handle it. I got your back.

The episode picks up immediately where 615 ended, with the sheriff of Odessa handling reports of weird dinosaur creatures roaming the outskirts, metal balls falling from the sky and glowing lights in the sky.

The Legends plan to use a Time Courier to teleport onto the rogue Waverider and attack whoever blew up their ship. Unfortunately, the Time Courier Nate was carrying runs out of power.

The team is unable to use the mind flasher to erase Pastor Hanson's memory because it too is out of power.

Reference is made to 605 and Astra turning the other Legends into household objects.

The team split up to search for the Fail-Safe from the Waverider.

Behrad offers to talk to Zari about what happened with John, noting he has a lot of experience with being dumped.

Zari denies being dumped and says she and John mutually agreed to end their relationship.

Zari tells Behrad about the key John gave her.

Zari decides she needs to reinvent herself to get over John.

Spooner is trained in tracking people and animals through the woods.

Gary and Ava hit upon disguising the Legends as circus performers.

Spooner and Ava refuse to take part in that aspect of the plan, and Spooner puts Ava to work on magically fixing her mom's house.

Gary dresses as a magician, Sara poses as a ring master and Behrad and Zari dress as clowns.

Nate and Ava go to the Sheriff to retrieve the Fail-Safe.

Nate poses as J. Edgar Hoover, who had just become director of the Bureau of Investigation in 1925.

Sara, Gary, Behrad and Zari are able to pacify the people of Odessa by saying the dinosaur aliens were a Komodo dragon and the lights and explosions were new display tricks.

Ava mistakenly says the President is Warren G. Harding when it was Calvin Coolidge at that point in time.

Gary panics when asked when the circus will be opening and says that night.

Sheriff Wood figures out that Nate wasn't the real J. Edgar Hoover after seeing a newspaper article with a photo of J. Edgar Hoover on the front page, which says he's in Texas hunting a notorious gang of bank robbers.

The Fail Safe turns out to be empty, except for a copy of the Time Bureau Manual, an IOU note from Mick Rory saying he was taking the Courier for a beer run and a pack of Behrad's marijuana gummies.

Gloria returns, having heard in town that people were expecting a circus to be set up on her land that night.

The Legends are fully ready to try and throw together a circus, but Spooner tells them they can't risk endangering her mother.

Astra tries to work John Constantine's resurrection spell on the Waverider wreckage, even though it was designed to work on people, not objects.

J. Edgar Hoover travels to Odessa, after the sheriff calls his office in Washington DC to report someone impersonating him.

Hoover is convinced that the imposter Hoover is part of the Midland Robbery Gang.

Astra passes out trying to cast the spell. The failure of the spell causes an explosion, which gets the attention of J. Edgar Hoover and the sheriff.

Zari uses the key John gave her in the closet door in Gloria's bedroom, when the Legends are forced to hide and J. Edgar Hoover begins searching Gloria's house. This leads them into a replica of John's mansion located in Hell.

Behrad speculates John gave Zari the pocket dimension house because he thought she might need a place to be alone and think.

Zari decides to stay in the house for a while.

While going through the Time Bureau Manual, Ava discovers a section on an obscure scientist who laid the foundation for all of time travel, named Dr. Gwynn Davies, who lived in New York City in 1925.

Ava plans out a bank robbery that will take $93.65, which she determined is the exact amount they need to travel to New York City from Odessa, Texas.

Ava and Sara rob the bank, while Behrad and Nate work crowd control and Gary drives the getaway car.

A sign in the bank gives the date as Thursday the 9th. This corresponds with the calendar of both April and July 1925.

Behrad names their gang the Bullet Blondes after Sara and Ava.

J. Edgar Hoover sets up a barricade, which Nate drives through.

J. Edgar Hoover jumps onto their car and is thrown off. He appears to be dead, but when the Legends crowd around him he draws a gun and tries to shoot Nate, who turns to steel, causing the shot to ricochet and kill Hoover.

Gloria advises Astra that not every magician does magic in the same way, so she doesn't need to feel shame she can't work a spell just like John Constantine.

Spooner and Astra agree that they are one another's best friend.

Astra says the last word of the resurrection spell. This leads to a naked woman suddenly appearing in the field. Spooner and Astra somehow guess this is Gideon, in a human body, before she speaks.


The Bottom Line
A heck of a start for the new season.
Posted by Starman at 7:20 PM