Legends of Tomorrow: Season 7, Episode 2 - The Need For Speed 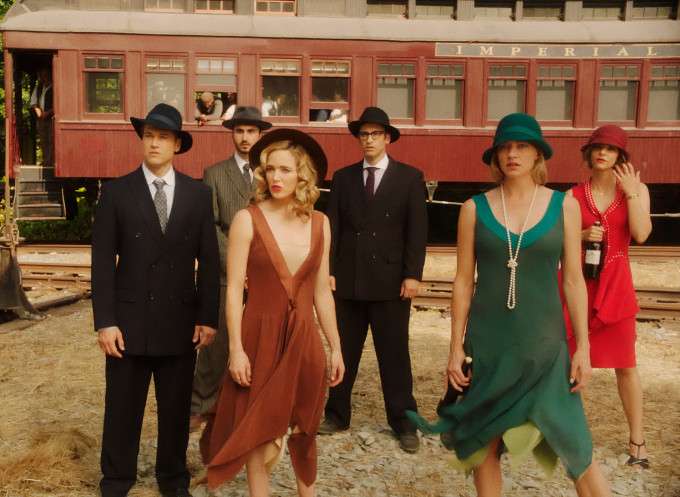 Plot
The quest to get to New York City leads Nate to try impersonating the now-deceased J. Edgar Hoover - a task that is easier said than done. Meanwhile, as Zari undergoes a digital detox and tries to figure out who blew up the Waverider, Astra and Spooner cope with their sudden creation of a flesh-and-blood Gideon.

Murder on the Orient Express (mystery on a train), Harry Potter (Gary's potion seems to be based on the Polyjuice Potion), The Terminator (appearance of time-traveling Hoover robot once its face is removed) and 1940's gangster movies.

A sign in 701 suggested that it was either April or July 1925, based on the day of the Bullet Blondes first robbery. This wildly conflicts with Gideon's declaration that November 7th, 1925 is in two weeks.

Nick Zano has a good turn here playing Nate playing J. Edgar Hoover and getting a little too into the role.

The effects-work/costume for the Hoover robot.

Again, the period costumes are fantastic across the board.

This is the first episode to feature a new animated title card sequence for Season 7. Matt Ryan appears as his new character at the end of it.

The title of the episode is both a reference to a line from the movie Top Gun and a nod to J. Edgar Hoover's nickname among his closest agents. There are several stories about how Hoover earned the "Speed" nickname, but the one Hoover himself told was that it related to how quick he was as a grocery delivery boy in his youth.

Gary knows how to brew a magic potion that allows someone to look like someone else. However, it requires time to ferment properly and a sample of the spit, fingernails or hair of the person you want to look like.
The potion has some unfortunate side effects and limits. First, it seems to cause the person who drinks it to become more like the person they're impersonating, leading to Nate being casually racist to his teammates. Also, anyone who sees the potion being drunk will be immune to the illusion, so Gary and Behrad can't tell if the illusion is working or not as Nate drinks the potion in front of them before Gary can tell him not to. The potion's duration is also dependent on the metabolism of the person who drinks it, so it can last for as long as a day or as short as an hour.

The refrigerator in the mansion dimension is enchanted to keep creating endless bottles of whiskey.

Sara: Great men aren't usually good guys.
Zari: Shh. Aves, I love you. I love you both. I love your love. I love that you're loving each other right now, even if that love is happening directly above me while I eat sugar foam.

Nate: Hoover doesn't run an investigation from behind!

Spooner: So why are you so mad at Gideon? She hasn't done anything to you.
Astra: Because... she's a constant reminder of my giant failure.
Spooner: That's why you don't want to go after the Legends.
Astra: I'm useless to them, Spooner.
Spooner: You made one mistake, Astra. Ease up on yourself. At least you still have magic.
Astra: Hey, you have things to offer too.
Spooner: Like what? Without aliens, what do I bring to the table? Ranch wear?

Behard knows a surprising amount of information about how car engines work.

The radio reports indicate that the Bullet Blondes are on the loose but nothing is said about J. Edgar Hoover going missing.

After the Legends discover a train ticket to New York from Midland, they hit upon the idea of Nate continuing to impersonate J. Edgar Hoover. This leads to Gary brewing an illusion potion that will let Nate look like Hoover.

Gideon is apparently unable to speak.

To distract people away from Nate not looking like J. Edgar Hoover, Behrad and Gary pose as FBI agents and they act like they've captured the Bullet Blondes and are taking them to New York.

The Legends are able to commandeer the honeymoon suite on the train, which is said to be the most secure room on the train. The couple who had rented the room are happy to oblige, specifically thanking Hoover for The Palmer Raids.

Nate explains that The Palmer Raids were a series of arrests the Bureau of Investigation ran in 1919 and 1920 to round up and deport immigrants, anarchists, union organizers, communists, and radical leftists who were said to be trying to engineer a revolution in the United States.

Sara and Ava enter into the back-up mansion with Zari's key, taking the Time Bureau manual and the chocolates from the Honeymoon Suite with them.

Zari 2.0 is decidedly dressed down, wearing a red flannel bathrobe that resembles one of the shirts favored by Zari 1.0. She is also stoned out of her mind on Behrad's spare gummies.

Sara and Ava start celebrating their honeymoon in the upstairs part of the mansion.

Nate is treated to lunch by an FBI agent named Francis Baker Junior, who is quite pointed about not inviting Behrad or Gary to join them.

Gideon keeps making apple-headed dolls and crushing them in an effort to communicate with Spooner and Astra.

Ava discovers Zari eating whipped cream straight from the container - another thing Zari 1.0 was known to do when depressed.

Ava suggests that Zari start cleaning the mansion to distract herself from her breakup.

According to Zari, Ava is quite noisy in bed, which Ava denies, until Zari says "Core Competency."

When a woman's purse goes missing in the dining car, Nate takes command of the situation and solves the case (a dog named Goldie took it to get at the pastry inside it) despite the other FBI agents wanting to blame Behrad and Gary.

Another group of FBI agents get on the train at Texarkana and inform Nate that they've learned of a plot to kidnap him.

Gloria points out that if the Legends had gotten a working time machine and hadn't come to get Astra and Spooner by now, that probably means their plan to go to New York didn't work.

Hoover's agents immediately assume the kidnappers must be foreigners because they misspelled "train" and "northbound" on an intercepted telegram. The fact that they might be illiterate or bad spellers eludes them.

Nate, Gary and Behrad interview everyone on the train. Unsurprisingly, most of the workers and lower class people hate Hoover, while the rich passengers love him.

Gary, Nate and Behrad eventually figure out that the only way to realistically kidnap someone on a train would be to redirect it down another route that wasn't being watched by the FBI.

The FBI agents hit upon Igor Lewandowski - a Russian train engineer and labor organizer who suddenly joined the train crew in Midland.

The FBI agents encourage Nate to beat a confession out of Lewandowski in private. Nate tries to go along with it, much to Behrad and Gary's disappointment.

Zari starts out trying to clean the mansion's kitchen, but she discovers that the fridge is enchanted to keep creating bottles of whiskey. (Zari notes that you aren't supposed to keep whiskey refrigerated.)

Zari theorizes that the second Waverider that blew up their Waverider had to have come from somewhere, which means that other Waveriders could be coming from anywhere in time again.

Gideon makes six apple-head dolls, puts them in a box and smashes them. Astra and Spooner still have no idea what she's trying to tell them.

Astra says she feels useless since she can't get her magic to work most of the time. Spooner admits to feeling similarly limited since her power only worked on aliens.

Gideon electrocutes herself after Astra wishes she could just shove her back into the wires and sockets. This causes Astra and Spooner to realize that Gideon can understand them, even if she can't communicate back.

Zari read the Time Bureau manual, which is over 200 pages.

Zari and Ava began using the whiskey bottles to count out every enemy the Legends had who might have blown up the Waverider. These include Damien Darhk (who they don't know is dead), Lex Luthor (whom Sara encountered during Crisis on Infinite Earths), Mallus (the villain of season 3), the Crisis paragons, Rip Hunter (who was briefly a villain in Season 2) Rasputin (an Encore in season 5), Kuasa (Vixen's evil cousin from season 3), a unicorn (monster in season 4 premiere) a giant Beebo (Crisis on Infinite Earths), David Bowie (season 6) and the multiverse itself. Mention is also made of time wraiths (from The Flash), time witches (from Supergirl), time pirates (from season 1), clones and doppelgangers. Time itself is also mentioned.

Hoover interrogated Lewandowski back in 1919 during the hunt for Emma Goldman.

Lewandowski lost everything because of Hoover, but he was planning to stay away from him, not kidnap him. In fact, he was coming to tell the FBI that someone switched the track the train was on when he was arrested.

The FBI agents who warned Nate about the plot were actually gangsters working for Al Capone, who was behind the plot.

The gangsters call Al Capone Snorky. This was one of his many nicknames, with Snorky being a slang term for a sharp-dresser.

Nate gets off the train to confront the gangsters. Unfortunately, it's at this point Gary's illusion wears off and the gangsters realize he's a fake.

Ava makes mention of the demon dog from 511.

Sara, Ava and Zari show up with all the whiskey Zari made. This distracts the gangsters away from killing Nate.

Nate apologizes to Gary and Behrad for how he acted earlier.

Another J. Edgar Hoover shows up and starts shooting the gangsters.

The second J. Edgar Hoover turns out to be a robot, which self-destructs.

The Legends now believe that robots blew up the Waverider.

Spooner reportedly did not start talking until she was six years old, but Gloria said she still found ways to make herself understood.

Spooner holds Gideon's hand and is able to hear her thoughts.

Gideon says that Dr. Davies time machine experiment will take place on November 7th, 1925. That is two weeks from that day, making the date of this episode October 24, 1925.
Location

Most of the Legends spend the episode on a train between Midland, Texas and Texarkana, Texas.

Spooner, Astra and Gideon remain in Odessa, Texas, where the episode ends on October 24, 1925.

The Bottom Line
An amusing episode, which builds the stakes of the season well.
Posted by Starman at 4:16 PM