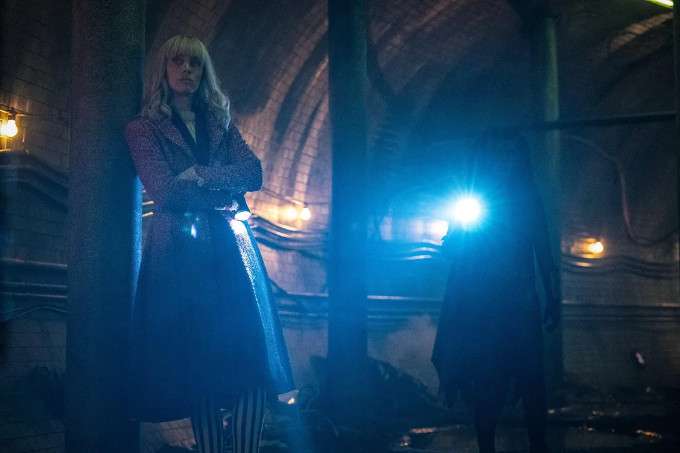 Plot
Forced to work with Alice to track down the Bat-Trophies, Ryan Wilder's life is further complicated by the emergence of a new Killer Croc and the sudden arrival of Jada Jett; a powerful CEO who is insistent on meeting Wayne Enterprises' new CEO. Meanwhile, a secret threatens to drive Luke and Mary apart, as Sophie grows closer to Ryan.

General beastman horror movie aesthetic, with a man-eating monster in the sewers of Gotham.

Steven's father reportedly took him to several Gotham City doctors trying to treat his condition, yet none of them noticed the resemblance to Killer Croc's rare condition?

As usual, the interplay between Javicia Leslie and Rachel Skarsten is the best aspect of the episode.

The direction of the episode does a good job of pushing the horror movie elements of the story, particularly in the opening scene at the pool.

This episode title kept changing from "Loose Tooth" to "Loose Teeth" in various announcements building to its release.

Killer Croc first appeared in Detective Comics #523 in February 1983. Born Waylon Jones, Croc was the victim of a rare form of atavism that gave him reptilian skin. His mother died in childbirth and he was raised by an abusive aunt. In the Pre-Crisis reality, he was the killer of Jason Todd's parents and presented as a large, but still basically human mob boss.

After Crisis, Croc was reworked into a more monstrous figure, with his condition being aggravated by a virus that devolved him in the Hush storyline. More recent comics have made Croc more animalistic, but explained away his enhanced strength and ability to breathe underwater as the result of his disease interacting with his metagene.

The Arrowverse version of Killer Croc was a professional wrestler named Waylon Jones, who developed some kind of disease that started slowly turning him into the monstrous crocodile man of the Post-Crisis era. Reportedly Batman tried to find a cure for his condition, but the GCPD elected to solve the problem of Croc's cannibalism by dropping thermite into the sewer. Reportedly all Batman could find of Croc afterward was a single tooth.

In the opening scene, one of the new Croc's victims makes reference to Aquaman and how he is ripped. This could be an indicator that the Arrowverse Aquaman is a doppelganger of Jason Momoa's famously muscular and often shirtless take on the King of the Seven Seas.

The original Killer Croc suffered from an unidentified infection that caused his skin to grow scales, eventually developing an elongated jaw, claws and a tail.

According to Sophie, Killer Croc's saliva contained a paralytic agent which rendered his victims unconscious.

Mary notes that medical professionals do not use the word "crazy" to describe patients now.

The Batwing suit tracks medical date like biometrics, eye movement, electromagnetic impulses to the brain and heart rate. Due to a glitch, when the person wearing the suit is injured, it places the suit in safe mode and shuts down.

Montoya: If you attempt to escape, this release will be rescinded and you will spend the remainder of your life at Arkham in solitary confinement. Any questions?
Alice: Yes. (gestures to tracking bracelet) Does this kind of wreck my ensemble?
Montoya: Any questions I'm likely to answer?

Ryan: You're tying my fate to a psychopath?
Montoya: Well, more like handcuffing it, but yes.

(Mary and Luke are working on the Batwing suit.)
Mary: If I'm reading this right, the suit thought you were injured.
Luke: Yeah, which prompted a system-wide shutdown, putting the suit in safe mode.
Mary: Turning off in the middle of a fight because it thinks you need medical assistance seems more like unsafe mode.
Luke: Yeah, well, there's a reason that this thing was under a tarp in my dad's lab and not out on patrol in Gotham.

Alice: I was thinking back to my first kill, for which I chose a geriatric harpy with an oxygen tank. Now, do you know why I did that?
Ryan: Because you're a killer, Alice.
Alice: No. (beat) Well, yes, but that's not the takeaway. I chose her because she was easy pickings.

Alice: Do you really think I'm gonna run?
Ryan: Do you really think I'm going to believe that you give a damn about stopping this Croc? Yes. I think you're gonna run the first chance you get. So, it's my job not to give you any chances.
Alice: Oh, that's funny. I thought it was your job to save a little girl.
Ryan: Don't act like you're here to do the good deed, Alice. You only think about yourself, so, don't you dare use that little girl as camouflage.
Alice: (intensely) I was that little girl. Don't act like you're the only one with abandonment issues. I will not give up on this girl the way everyone gave up on me.

The opening scene shows two college students sneaking into a private pool, which was apparently turned into a lair by the new Killer Croc. What remains of their bodies is discovered later.

Alice is released into Ryan's custody, with the understanding that if she harms or attempts to harm anyone she will go back to Arkham for the rest of her life. She likewise threatens to out Ryan as Batwoman and put her in Arkham if she refuses to go along with this and fails to keep Alice under control.

According to Luke, Killer Croc ran wild in Gotham 20 years earlier and was a professional wrestler named Waylon Jones.

Bruce Wayne apparently tried to research a cure for Killer Croc's condition, but the GCPD killed Croc before he got the chance. All Batman was able to find of Croc afterward was a single tooth. It's possible the tooth could spread the same infection.

Wayne Tower is 44 stories tall, according to Alice.

Jada Jet, the CEO of Jeturian Industries contacts Wayne Tower wanting to have an immediate meeting with the Wayne Enterprises CEO.

Before leaving Gotham City, Kate Kane named Ryan Wilder the acting CEO of Wayne Enterprises so that she could handle an problems that came up in her absence.

Jada Jet took over Jeturian Industries after her husband's death a decade earlier and doubled the company's wealth.

Sophie tells Ryan that Jada Jet is her birth mother.

Jada Jet says she met Bruce Wayne a few times. She exchanged heated words with him after he poached one of her best employees.

Jeturian Industries is 12 blocks away from Wayne Tower.

Jada Jet explains that she came to talk to Ryan because someone hacked into her company's servers and the trail led to an IP belonging to Wayne Enterprises. She accuses Ryan of corporate espionage and tells her this is her one warning to stay out of her business.

The artificial intelligence in the Batwing suit has Lucius Fox's voice and something of his personality, as it offers to show pictures of Luke when he was 6 when Mary asks it what Luke was like as a kid.

Alice theorizes that the new Killer Croc, like any young predator, would start out going after lone targets or other easy prey. This leads her to go through the missing persons reports and discover a spike in missing persons on the East River, less than two miles from the pool murders.

A girl named Whitney Hutchinson is abducted by the new Croc while playing in a park near dusk.

Alice finds a sizeable piece of shed reptile skin which had to have belonged to the new Croc.

Alice tries to get Ryan talking about meeting her birth mother. To shut her up, Ryan says she seemed powerful and strong, but she doesn't care to have her in her life.

Ryan and Alice discovered rotting meat hanging in one part of the sewer. It was hung by a man who said the new Killer Croc was his son, Steven.

Mary gives Luke a physical. He seems to be in good health, apart from his heart racing when Mary touches him while his shirt is off.

Luke decides to override the fail safe on the Batwing suit, thinking the AI is overprotective.

According to Steven's father, he discovered Killer Croc's tooth in the stomach of a bluegill they caught while on a fishing trip. He put the tooth on a necklace and cut himself on it. After that he got an infection and began changing in ways the doctors couldn't explain.

The new Killer Croc grabs his father and drags him off.

Alice takes the taser and uses it to short out her tracker bracelet before running for it.
Mary lies about the suit being fixed when Ryan asks her about it and if Luke can join her in the field.

Alice hears Whitney Hutchinson crying for help, but abandons her when she discovers her leg is broken.

Ryan tries to talk the new Croc down, but gives up after she finds the father dead.

Batwoman is able to beat the new Croc and save Whitney Hutchinson.

Vesper Fairchild dubs the new villain Croc 2.0 and reports that Arkham Asylum is building a special cell for him.

The Lucius AI is not speaking since Luke disabled the failsafe.

The Rogues Unit investigate a Poison Ivy vine that is determined to be a fake.

Ryan confronts Jada Jet and tells her that she is the baby she abandoned.

Montoya encountered Poison Ivy at some point in the past.

Alice abandons the missing girl after saying she'd never abandon a girl like she was, in a forced moment that seems to have been written into the show purely because the audience was feeling more sympathy after Season 2 for Alice than Ryan.

Largely lackluster, despite some effective horror-movie direction and good production values on the new Killer Croc. Unfortunately, the whole thing suffers from feeling rushed and Alice acting out of character because the writers are apparently afraid they need to remind the audience that Alice is an anti-hero constantly.
Posted by Starman at 11:06 AM