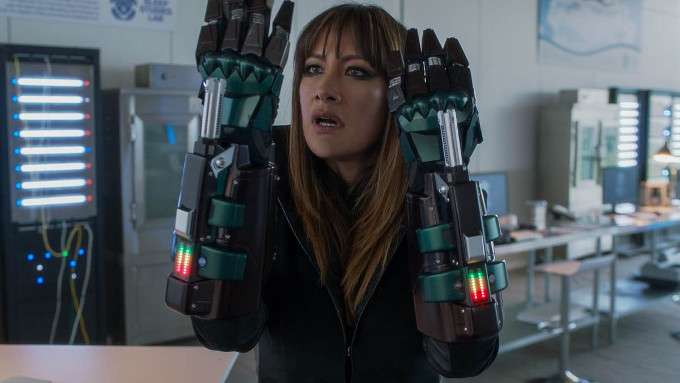 A nightmare monster attacks National City, as Kara finds herself landing a story she always dreamed of. As Dreamer leads the battle against the monster and turns to her estranged sister for help, Nxyly meets her secret admirer and an unholy alliance is formed!

Under the Dome by Stephen King (the dome the Super Friends use to trap the nightmare monster is similar), Ancient Greek Mythology (dream totem in a Minoan Labyrinth) and Kaiju movies in general. (giant monster, feeds on radiation.)

Nicole Maines has a fantastic turn as Dreamer in this episode.

The CGI for the battle between Dreamer and Nyxly is quite good.

The Lexosuit given to Nxyly creates an artificial intelligence based on her mind.

The Dream Totem is said to give the possessor the same powers that Nia Nul inherited.

Dr. Pavoni with the Dream Institute of National City built a device capable of allowing people to access the Dream Realm without metahuman powers.

The Lexosuit is able to replicate the function of Dr. Pavoni's machine after a few moments connected to it.

Lex Luthor designed a satellite-based force-field that could wall off an entire city. Lena uses this to trap the nightmare monster temporarily. Unfortunately, this also cuts off half of National City from the outside world.

Nuclear energy and dream energy are similar enough that a nuclear power plant acts as a beacon to Nightmare Monsters.

The Oracle of Delphi placed a ward on the Dream Totem so that it could only be claimed by one who is pure in heart, mind and sight

(The Dream Totem has declared Maeve unworthy of its power.)
Maeve: It was supposed to be mine. I worked my entire life towards becoming the Dreamer. Studying, preparing... Every decision I ever made was for that. It was my purpose, my identity. (to Nia) And you took it!
Nia: I didn't have a choice. I tried to transfer the powers to you, I told you that. But I couldn't. So what do you want me to say? That... That you should be the Dreamer? That I don't know what I'm doing most of the time? That I'm in over my head?
Maeve: (bitterly) Honesty, finally.
Nia: Oh, you want honesty? Okay. I have no pity for you! I'm sorry that you wasted all of those years reading all of those books, assuming with no cause, by the way, that you'd be the Dreamer. But look at yourself, Maeve. You were willing to put the entire universe at stake so you could take the powers. Are you really that selfish? Do you think that's what the Dreamer would do? You don't think I deserve these powers? You don't think I'm a real woman? Well, I don't care. I know who I am. I am the Dreamer. The question is who are you? Because you are clearly not the sister that I thought you were.

According to Nia, her father took her side in the argument with her sister Maeve from 411. This caused Maeve to take all of her mother's notes and research with her before disappearing.

Brainy suggests that Nia try and use her powers to find a clue of where her sister is.

Nia has a vison of an address at Crispin University.

Brainy hasn't been using his image inducer since William began working at the Tower, but Nia tells him he should keep his natural look.

When Nxyly was 10, she had a crush on Duke Nzykmlk - a cousin of Mister Mxyptlk. This fact convinces her that the AI in her Lexosuit really is her.

Alex brings drawings of each of the Super Friends that Esme made to the Tower.

Kelly has taken Esme to visit James in Calvintown.

It has been at least one week since the events of 615, as Kara makes reference to Kaznia and Corto Maltese agreeing to a truce within the last week. The official peace treaty is due to be signed in National City within the next few days.

Kara was somehow able to watch Larry King's "World Diplomacy Live" interview while trapped in her pod in the Phantom Zone.

Kara asked Cat Grant to pull some strings to arrange for her to meet with Prime Minister Perez of Corto Maltese and President Zakharov of Kaznia.

Andrea considers Kara's idea of trying to show the peace process in action boring, but thinks CatCo can hype it as being like their version of "Oprah and the Royals."

Nia discovers that Maeve changed her name to Dr. Reeve and that the address in her vision was for Maeve's new office at Crispin University.

Maeve tries to apologize for saying Nia wasn't a real woman but Nia cuts her off, saying she doesn't want to talk about that.

Maeve has heard of the Dream Totem and has several books which discuss it and where to find it.

William offers to help Kara prepare for the interview, having written big articles on both Kaznia and Corto Maltese in the past.

Nyxyly's creation of a dream portal unleashes a nightmare monster from the Dream Realm.

The Nightmare monster becomes invisible after it is pinned-in by the Super Friends' forcefield. This also causes its energy signature to become undetectable.

According to Maeve, the Dream Totem was once housed with the Oracle of Delphi's temple but was relocated to the Dream Realm after the Dorians invaded. It is also suggested that the gauntlet to claim the Dream Totem might have inspired the legends of the Labyrinth.

Maeve also has a tapestry which depicts the Oracle's directions to the Dream Totem. The first part says the Totem is warded so that it can only be claimed by one who is pure of heart, mind and sight.

Maeve recognizes one of the symbols in the tapestry as the Naltoran symbol of purity, which matches the symbol on a necklace her mother gave her, telling her that it would light up her dreams.

Maeve and Nia guess the tree in the tapestry may be a link to the forest in Nia's dreams of late.

Maeve made a scrapbook of news stories about Dreamer.

Nia invites Maeve to join her in the Dream Realm in finding the Totem.

Nia texts Brainy to tell him what she's discovered. He relays to the other Super Friends that the Dream Totem is in the Dream Realm, which explains why Nyxly was trying to get back into it.

The Super Friends work to combine Dr. Pavlov's machine with Lena's portal tech to create their own pathway into the Dream Realm.

William calls Kara and reminds her about their appointment to do a mock interview. J'onn tells her to go ahead as the rest of the team has things under control.

Maeve makes reference to a writer named M.K. Nessler who wrote a book called Of Dreams Beyond which was about navigating the dream realm.

Maeve's necklace glows near one particular tree. This opens the way into the wider Dream Expanse beyond Nia's personal dreamscape.

William advises Kara not to let her subjects duck any direct questions.

Andrea is able to arrange an off-the-books meeting with the chief Kaznia treat negotiator later that day at 2 PM.

The governor of California demands the Super Friends remove the dome.

Nyxly spies Nia and Maeve and follows after them.

The governor gives the Super Friends 12 hours to complete a portal device to get rid of the Nightmare monster.

Kara misses the meeting with the Kaznia negotiator because they came and left while she was out stopping the rioting as Supergirl.

Nia uses her powers to create a floating platform - a trick she learned on her own. This enables them to get a birds-eye view of the forest and find the glowing spire that contains the Dream Totem.

Amdrea calls and threatens to fire Kara if anything goes wrong with the interview.

The Governor calls out the Air Force and the National Guard to try and take down the dome.

Willaim comes to the tower to get a statment on the current disaster, saying that Supergirl is needed to calm people down, as Kara is getting ready to leave for her interview.

Nxyly tries to use her gauntlet to break the ward on the Dream Totem.

Maeve gives Nia her necklace thinking the extra dream power might help. Unfortunately, Nxyly is able to get away with the Dream Totem.

Kara is forced to leave the interview to help push the Nightmare beast back into the Dream Realm.

When Kara leaves, the diplomats have already left the site of the interview.

Kara decides to quite her job as a reporter at CatCo and tells Andrea to let William do the interview instead.

Maeve tries to apologize to Nia again Nia refuses to forgive her but does agree to give her a second chance.

Lex Luthor reveals himself to Nyxly.

Kelly and Esme are said to be visiting James in Calvintown.

Kara asked Cat Grant to pull some strings to arrange for her to meet with Prime Minister Perez of Corto Maltese and President Zakharov of Kaznia.

A great Dreamer episode but everything else seems rushed, especially Kara's exit from CatCo. Still, if this means no more (or at least fewer) scenes of Andrea being the world's worst news editor, I'll take it.