Legends of Tomorrow: Season 7, Episode 11 - Rage Against The Machines 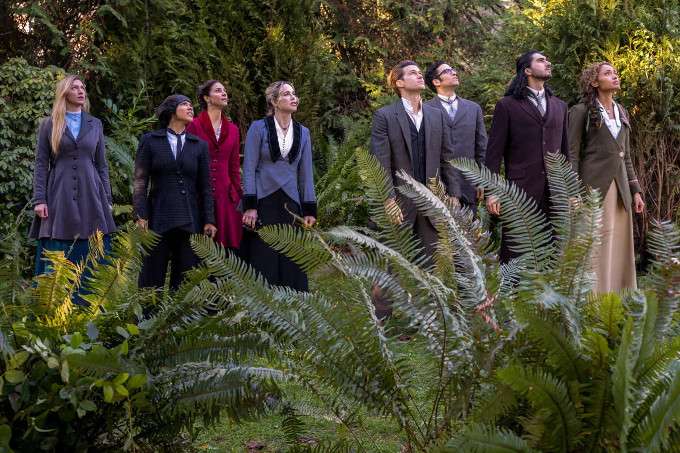 With the unexpected help of Eobard Thawne, the Legends break a fixed point in time as part of a trap for Evil Gideon and her robot Legends. Naturally, things don't go according to plan...

Doctor Who (the idea of fixed points in time and general tone) and the trope of a bar located outside of normal time and space, perhaps most famously presented by Spider Robinson's Callahan's Crosstime Saloon.

Matt Ryan does a fantastic job of making Dr. Davies into more than just a generic religious man or ineffectual academic in this episode, showing the steel that led him to start looking into a way to defy the laws of physics to fulfil his obligations.

The "Don't Worry, Be Happy" sequence may be one of the funniest things the show has ever attempted.

The fight between the two Zaris is a nice twist on the usual cliché twin battle.

The episode title is a nod to the band Rage Against The Machine.

This episode uses the same special logo card as in 708.

This episode was directed by Jes Macallan, who plays Ava Sharpe.

Astra does not know a spell or potion that can make people need to go to the bathroom.

Gary has a food-poisoning potion. The only problem is he isn't sure if it will cause vomiting or loose bowels.

Astra 2.0 tries (and fails) to impersonate her robot counterpart by telling Evil Gideon she needs to bypass her auxiliary matrix in order to directly interface with it.

(The Legends are watching the Waverider copy land.)
Gary: (nervous) I wonder who they're copies of. I hope it's not an army of Hoovers.
Astra: Robos are Robos... doesn't matter what they look like. We're taking them down.
Sara: Damn right, Astra. There's no one the Legends can't beat.
(The Evil Legends exit the Waverider. The Legends see they are literally fighting themselves.)
Sara: Son of a..

Nate: Robo-Me is steel with normal skin. And he has giant arms? I mean, come on. Pick one. The ego on me...
Zari 2.0: I mean, he's clearly over-compensating.
Gary: (check out Citizen Steel through his binoculars) Oh, no, no. He's really filling out those pants.

(Sara is trying to talk reason with the Citizen Steel robot.)
Sara: We had a plan to put history back, which is why you shouldn't have killed Thawne.
Citizen Steel Robot: Well, our orders were to kill all Time Travelers here, including you.
Sara: We don't even wanna be here. We wanna go home. So let's just come to an agreement so no one else has to die.
Citizen Steel Robot: Your lectures are the worst.
Sara: Well, you were modeled after us.
Citizen Steel Robot: We're nothing like you! You guys are pathetic losers who ruin everything.
Sara: Were you programmed to be this annoying, or is that a personal choice?
Citizen Steel Robot: We have one job, and that's to protect the timeline. And kill anyone who messes with it. (beat) So I guess we have two jobs.

Sara: What are we gonna do? We can't reason with them. We can't fight with them. What am I gonna tell the others?
Gwyn: That you tried to negotiate with them, and that they tried to kill you. That you fought honorably, and they fought dishonorably. And therefore, you were under no obligation to fight with honor.
Sara: Honorably or dishonorably, we still can't beat them.
Gwyn: In war, a soldier is only ever as good as his general. Even in the darkest of times, it is the general's job to be a beacon of light.
Sara: We are the Legends, not the military.
Gwyn: But it's all the same! Don't you see? I was a lost, lonely, and broken man. But with your help, I was able to-to-to rebuild myself back up. We are in the valley of the shadow of death. But we will get through this, and we will defeat those wretched machines. I believe in you, Miss Lance. Like you believed in me. And you will figure out what we ought to do here.
Sara: What would you do?
Gwyn: Who, me? Oh, no, no, no, no, I'm no leader. You are.
Sara: But you were a soldier. With more wartime experience than any of us. So against a dishonorable foe like that, what would you do?
(Gwyn looks thoughtful.)

Zari 2.0: Oh, thank God. Did you shut down Evil Gidget?
Behrad: Not even close. In fact, the only person allowed access to her is Robo-You.
Zari 2.0: There's a Robo-Me? I'm pretty sure it's impossible to duplicate this perfect bone structure.
Behrad: Sure, but you're still gonna have to impersonate her.
Zari 2.0: Oh. My agents warned me against playing villains. But I will make an exception. What does, um, my Robo-Self look like?
Behrad: Um, a '90s hacker?
Zari 2.0: Hmm, very cliché. But I can work with it.

After word hits The Fixed Point that the Legends successfully averted Archduke Franz Ferdinand's assassination, drinks go on the house.

Knowing the Legends are about to confront an evil Waverider, the rest of the time travelers in the Fixed Point decide to join the fight.

The Legends see that the Waverider is being crewed by a team of robot doppelgangers. Before they can come up with a new plan, the other time travelers attack, which distracts the robots.

Evil Gideon orders the Gary and Spooner robots to hang back and stay on the Waverider, which takes off before the Legends can steal it.

The Evil Legends start killing all the time-travelers.

Ava is shot as the team flees the Evil Legends.

Sara and Nate stay behind to fight the Evil Legends as the rest of the team flees.

The White Canary and Citizen Steel robots quit hunting the Legends to focus on making sure Archduke Ferdinand dies.

Sara goes to warn Thawne about the Evil Legends as Nate tries to catch up to the rest of the team.

Thawne is killed by the White Canary robot.

Astra destroys the Behrad robot with a hex.

Sara finds Thawne's body and is given his time-stopping device.

Gwyn tried to disinfect Ava's wound with vodka but is satisfied she'll recover in time.

All the other time travelers in The Fixed Point are confirmed to be dead.

Sara decides to try and talk to the Evil Legends and try and reason with them, saying they ultimately want the same thing - they're protecting the timeline, the Legends just want to go home.

Gideon wants to go with Sara, but Astra refuses to let her go and tells her to wait in the Manor. Sara agrees that Gideon needs to hold back in case her plan doesn't work.

Gwyn offers to go with Sara as her second, evoking military protocol and the idea that soldiers do not go into danger alone.

Sara hits the Citizen Steel robot in the head. This briefly causes him to start talking like Arnold Schwarzenegger.

Gwyn has a panic attack as the Citizen Steel robot attacks Sara, but works through his shock to save her.

Gwyn takes charge of the plan to defeat the Evil Legends by fighting dirty and playing to the team's strengths.

Behrad tries to replace his doppelganger, with the goal of shutting down the Evil Gideon once on-board. He carries the key to the Hell Manor with him

Gwyn tasks Sara, Nate and Spooner (as the most experienced fighters) with heading back into Sarajevo and trying to provoke a paradox that will force the Evil Waverider to return.

Behrad barely bluffs his way past the Robot Spooner and Gary, fumbling when he says he can't remember how many people he's killed. He's told to go see Dr. Sharpe for an upgrade.

Behrad tries to go into the computer room, but is blocked by the Robot Zari, who says only she interfaced with Gideon. She seems astonished Behrad thinks he knows anything about computers.

Gideon offers to help with the plan to poison the Evil Legends, but Astra angrily tells her that she is not leaving the manor.

Sara, Nate and Spooner are unable to provoke a ruckus since their plans to cause a major disruption only leave them looking like raving lunatics. These include doing the Macarena for an hour and trying to introduce the high-five too early.

Eventually, they are able to provoke a riot by planting a singing bass toy in broad daylight, spray painting the secret ending of The Empire Strikes Back on a wall and giving a VR headset to some random peasant.

Behrad tries to sneak onto the Waverider, but is cornered by the Robot Astra and Robot Ava.

Behrad is able to escape by offering to mix them his special "power shot", which includes Gary's food poisoning potion. This leaves them running for the bathroom, where Gary throws them out the manor doors and into Hell.

Gary talks to Gideon as she's taking care of Ava and offers to help. Gideon says it's the only thing she can do without getting yelled at.

Gary confronts Astra about why she's being so mean to Gideon and guesses it is because she sees Gideon as her daughter. Astra denies this.

The Robo Zari finds the entrance into the Hell Manor just as Zari 2.0 emerges in her disguise. The two get into a cat fight, with Astra and Gary unable to figure out which is the real one. Luckily, the real Zari wins out.

Zari attempts to type in a shutdown code to Evil Gideon as Astra and Behrad manually land the Waverider. However, she ultimately just pulls a bunch of wires to shut it down.

Astra and Behrad kiss for the first time after landing the Waverider.

Gwyn is told that he's officially a Legend.

The White Canary and Citizen Steel robots corner the Legends in The Fixed Point.

Sara tells Gwyn, Nate and Spooner about Thawne's time stopper and how she promised to take his place if he died. She tells the rest of the team to tell Ava what happened to her, but they refuse to let her sacrifice herself to try and distract the robots and fix the timeline.

Gideon pretend to be Evil Gideon and gets the White Canary and Citizen Steel robots to shut themselves down.

Nate reactivates the Citizen Steel double and tricks him into taking over the job of being the Guardian of Sarajevo on June 28, 1914.

Gideon goes into the hell mansion to tell Ava and Gary it is safe to come in and is seemingly killed by the Astra Robot, who is half-melted.

Sarajevo - June 28, 1914
A bar called The Fixed Point, which exists outside time.

A hilarious and heartfelt episode.