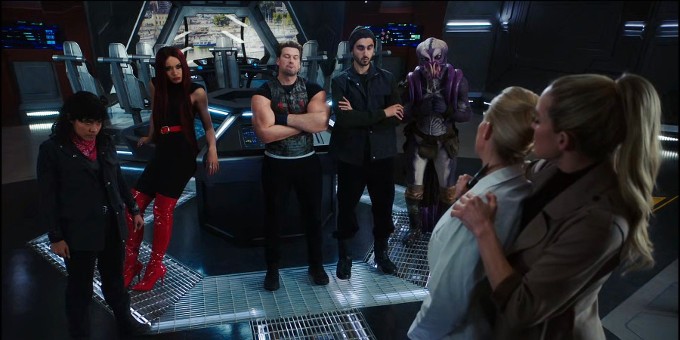 Forget everything you thought you knew. The real Legends of Tomorrow are back and ready to kick the metal asses of their evil robot doppelgangers, who are out to destroy the timeline. Or so their trusty taskmaster Gideon tells them. But something about that story doesn't ring true to Captain Sara Lance, who uncovers some harsh truths as she tries to understand her arch-enemies and why they're going out of their way to help people.

The DCEU (riffs on Snyderverse and John Cena's Peacemaker character) and the MCU (Evil Sara's "Black Widow" costume and posing, Legends being dark riff on TVA from Loki.)

When the original Legends files are show, a photo of Zari Tomaz is shown in place of Zari Tarazi. (It's possible, however, that Evil Gideon modified the Zari robot to be more like Zari 1.0 than Zari 2.0.)

Caity Lotz gets a surprisingly subtle performance here as the Evil White Canary, who comes to realize she's the villain of the episode.

The episode title is a reference to the character of Marvin the Paranoid Android from The Hitchhiker's Guide To The Galaxy.

This episode contains an opening monologue describing the show instead of a title card, which the show hasn't had since Season 3.

This episode includes a modified opening with explosions behind each character's name.

John Cena, who plays the Peacemaker in the DCEU, is referenced by the kids at the end, who mistake the Evil Citizen Steel for him.

Dr. Sharpe creates special Destiny Restoration Devices which she claims are energy weapons that she doesn't bother to explain. These are later revealed to be radioactive weapons that eventually cause those hit by its beams to die of radiation poisoning consistent with the deaths at the original Chernobyl disaster.

The Evil Citizen Steel robot is programmed to speak Russian.

Dr. Petrov is said to have created a process that accelerates the decay of radioactive waste, making what would take thousands of years to occur naturally happen in a matter of weeks.

Opening Narration: It all started when a man named Bishop created a team of robots. He sent them back in time with one goal: to destroy the 20th century. These machines were programmed to think that they were beyond human. That they were superheroes. They made their way cross-country, murdering some of the greatest figures in history. Famous lawmen and men of science. Finally, they kidnapped the inventor of time travel itself and, with his help, set their sights on destroying all of history. No one could stop these so-called Legends. Not until we came along - the real flesh-and-blood superheroes whose job it is to put history back on track. We are the real Legends of Tomorrow.

(A park. A boy and girl are fighting over a baseball bat.)
Boy: Hey, ow!
Girl: Get a new one, you shrimp!
(Evil Nate walks up to them.)
Evil Nate: Who are you calling a shrimp?
Boy: John Cena!
Girl: That's not John Cena, you dork! That's Commander Steel!
Evil Nate: Citizen Steel, and don't call him a dork.
Boy: Citizen Steel? Who's he?
Girl: What's with the patriotic outfit?
Evil Nate: What's wrong with my... listen, I'm here to talk to you about bullying.

The opening scene repeats the closing moments of 707, from the perspectives of the Evil Legends.

The Evil Legends are notably more trigger-happy and inclined to violence than the regular Legends.

Evil Behrad and Evil Spooner compete over who can kill the most people.

Evil Nathan Heywood wears his Citizen Steel uniform all the time and has ridiculously overdeveloped arms. There is no indication that he is a historical or a tactical thinker.

Evil Gary Green does not disguise himself as a human and enjoys eating humans without any sense of guilt.

Evil Ava Sharpe is the team's medic and science officer.

Zari and Astra are sent to the medical bay for Ava to work with them, despite the team being sure they are dead.

The Evil Legends briefly discuss why the Real Legends would bother helping some factory workers (707) or save some gangster's singer girlfriend from getting killed (704), before being dispatched to the Ukraine in 1986 to repair the damage done by the Real Legends.

While in the med-bay, Evil Sara notices a microchip labeled Zari. When she asks Evil Ava about it, she says that those are the crew's medical records.

The Evil Legends are told that the aberration centers around General Kalashnik, who was meant to die in the original timeline.

The Evil Legends find out the Destiny Restoration Devices they were given kill people with radiation. This restores their destiny by causing them to die in the same way they were meant to die during the Chernobyl disaster.

Evil Gideon tells the Evil Legends that the Legends caused the city of Pripyat to evacuate 36 hours faster than in the original timeline.

The Evil Legends force General Kalashnik to send out a message declaring that the first evacuation warning was a mistake to restore the timeline. When he refuses to help, the Legends threaten to kill his family, after Zari hacks his records and discovers pictures of his children.

Evil Sara becomes aware that she is a robot after waking up during Evil Ava's to fix her shoulder.

Evil Sara steals the chips with the Legends' names on them from the infirmary and shows them to Evil Zari.

Evil Zari confirms that the chips are awfully powerful for something meant to hold simple medical records.

Evil Zari says that after her surgery her brain felt faster and more focused. This causes them to wonder if Evil Ava is controlling them somehow or if she is manipulating Gideon.

Gideon reports a new anachronism - a nuclear physicist named Dr. Irina Petrov fled Chernobyl and spent six years in hiding. She went on to sell nuclear secrets, which Gideon said led to disaster in the future.

The other Legends gamble on just how Evil Sara will kill Dr. Petrov.

Evil Zari determines that Dr. Petrov's work doesn't lead to a disaster and could help save the world from nuclear pollution.

Evil Sara helps Dr. Petrov to escape and takes the data she was going to sell.

Evil Zari discovers that Evil Gideon has a secret firewall hiding the real historical records of the real Legends. They also discover the video file of Bishop creating the Evil Gideon, proving that she's the one who made them.

Evil Sara tries to convince the Evil Legends to turn on Evil Gideon, while Evil Zari deactivates Evil Gideon. Unfortunately, Evil Gideon convinces Evil Zari she can make her even more intelligent. This allows her to reprogram Evil Zari to be totally loyal and leads to Evil Sara being reprogrammed to be be less creative and moral.

The episode ends with a mock PSA, in which Evil Citizen Steel is beaten by two children with a baseball bat after lecturing them about bullying.

Seattle, Washington - 1943
Chernobyl - April 25, 1986
The Temporal Zone, on board the Evil Waverider
A park somewhere in modern times.

A hilarious send-up of what the show used to be and what other superhero series try to be. It falters in that most of the characters are one-joke cardboard cutouts (which is, itself, the joke) but there's some honest ethos with the Evil Sara making a decision to choose morality in spite of her conditioning.