Superman and Lois: Season 2, Episode 1 - What Lies Beneath 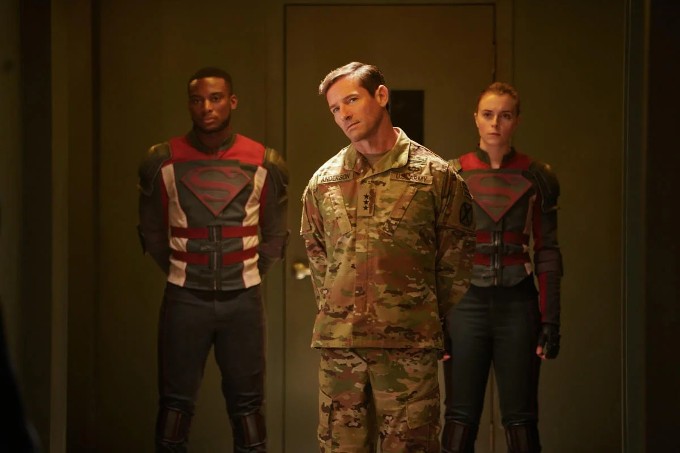 It has been three months since Natalie Irons came to Earth-Prime, but Lois still can't bring herself to speak to her daughter from another world. As she throws herself into her work and building a newsroom staff for the Smallville Gazette, Clark finds himself having harsh words with General Lane's replacement at the Department of Defense, Lt. Mitch Anderson. Meanwhile, Jordan and Jonathan face drastically different problems with their respective girlfriends, with Jon moving too fast and Jordan growing apart from Sarah Cushing.

The Death of Superman (appearance of Doomsday) and the Supermen of America series.

The special effects during the submarine sequences and the earthquake near the end of the episode are of cinematic quality. It's clear the show's FX team will not be slacking off in Season 2.

Lt. Mitch Anderson shares a name with a DC Comics character who first appeared during the Death of Superman storyline. Mitch Anderson was one of many civilians who was endangered by Doomsday's rampage. Mitch came to blame himself for Superman's death, as Superman came to his house to save him and his parents from Doomsday. Years later, Mitch developed magnetic powers, adopted the codename Outburst, and formed a team called the Supermen of America to honor Superman.

Apart from the name and forming a team of young people who make use of Superman's symbol, there is no apparent connection between Lt. Mitch Anderson and his comic book counterpart.

The fist that emerges from the ground in the final scene of the episode resembles the first of the Superman villain Doomsday, clad in the same containment suit that Doomsday wore in his first appearance. The showrunner later confirmed that Doomsday would be one of the season's villains.

(John Henry is running through his and Natalie's cover story.)
John Henry: Your name is...
Natalie: Natalie Johnson.
John Henry: And I'm...
Natalie: Henry Johnson.
John Henry: And we just moved here from...
Natalie: (bitterly) A planet that was totally destroyed by psychopathic Kryptonians.
John Henry: Nat, are you sure you wanna do this? Going to your old school, things could get confusing.
Natalie: Dad, I'll be fine.
John Henry: What if you run into the doppelganger of Regan or Annika?
Natalie: Then I'll pretend like I don't know that they're my best friends. Because they are not. They're not the same people. I know. The only person on this whole earth that I know is you.
John Henry: I just wanna make sure we don't attract any unwanted attention.
Natalie: (sarcastically) You mean like the same kind you get from flying around the world in steel war suit with Superman?

(Lois is telling Clark about walking in on Jonathan and his girlfriend.)
Lois: What happened is that I came home to find our not-even-old-enough to drive son in bed half-naked with Candice.
Clark: (shocked) Jonathan, come on, man. What are you thinking?
Lois: He's 15 years old and home alone with his new girlfriend. It's pretty obvious what he was thinking.
Clark: What? You mean... no, th... I never would've done that when I was his age!
Lois: Well, then he clearly takes after his mother.

Lois: Things haven't been okay for months. And I've been blaming you. And I'm sorry. Ever since you told me to say something to Natalie and I just stood there frozen.
Clark: You were in shock. All of us were.
Lois: It's more than that. She was my daughter in that other world and... seeing her standing there and calling me "Mom..." I felt nothing. And in that moment, I finally realized how my mom must have felt the day she left us.
Clark: Lois...
Lois: I've wondered how she could do that my entire life, how a mother could just...  abandon her children. And now I know. She didn't feel. She didn't feel anything. Not for me. Not for Lucy.
Clark: Lois, you can't know that for sure.
Lois: Yes, I can, Clark. And every time you ask me about Natalie or tell me to call her, it's just bringing up all of those feelings in me and all of this guilt.
Clark: You have nothing to feel guilty about.
Lois: She called me "Mom", Clark!
Clark: But she's not your daughter.
Lois: I know, but...
Clark: Lois, her mom died. And there's absolutely nothing you could've said or... or done to change that.
Lois: But I know how she felt. And she must have been so crushed seeing me look at her that way.
Clark: You are not your mother. What happened with Natalie, that's... that's a completely different thing.
Lois: I just hate this feeling.
Clark: (pulling her close) Here, come here.

Lt. Anderson: I asked you repeatedly, "Be part of my team".
Superman: What you asked for was my allegiance to America.
Lt. Anderson: And you refused.
Superman: Because I gave it to the world a long time ago.
Lt. Anderson: America needs to come first. And to them, it does. And the rest of my new team. When it does to you, come on back. I'd love to have you. Bring your friend.
Superman: I told you, he's done.
Lt. Anderson: Then they're who I'm calling.
(Lt. Anderson starts to walk off.)
Superman: Anderson. That crest you put on their suit, it's not yours to give.
Lt. Anderson: That's the most recognizable symbol on the planet. I want everyone to know that we are the good guys. Besides, America can have more than one Superman.

The opening scene of this episode picks up where the last scene of 115 ended.

Three months pass between the opening scene and the where Season 2 officially begins with the first day of school.

As the episode opens, Lois still hasn't spoken to Natalie Irons and is trying to build a new team of writers for the Smallville Gazette.

Natalie is said to be having her first day of school in Metropolis as well.

Sarah Cushing has been away for a month, working as a counselor at her old summer camp.

Lois says that Natalie is refusing to talk to her.

Mike & John's Barber Shop is one of the businesses in downtown Smallville.

A new business in Smallville specializes in selling Superman merchandise. Kyle worries about the city becoming a tourist trap, but Lana points out it's helping save the down in the wake of Morgan Edge's actions.

Chrissy Beppo interviews a young writer named Michael who works for "The Messenger" doing copy proofing and layouts, but he mostly worked on monetizing the site. He also runs his own blog and claims to have 40,000 Twitter followers. He describes himself as the "WOAT or GOAT" guy.

Lois is not impressed by Michael and dismisses him.

Chrissy accuses Lois of having standards that are too high.

Lana has thrown herself into the campaign for Daniel Hart, who is running against George Dean for the post of Mayor of Smallville.

Jordan asks Sarah to meet him at Atlas Pond, where they were arrested in 113. However, this time he asks for permission to be there first.

Jonathan is still the back-up quarterback for the Smallville High football team. He's playing at practice again, but is annoyed the coach won't let him do any pass play drills.

Clark hears a submarine in distress that causes him to leave Jonathan and Candice alone at the Kent farm. He says that he need to go to the Hubbard's farm, as Ben Hubbard asked him to check the headers on his combine.

As Superman is saving the submarine, he has some kind of fit and clutches his ears as if he were hearing something painfully loud.

The submarine that Superman saves is North Korean.

Natalie starts school at what was her high school in her original Earth. She is using the alias Natalie Johnson.

Lois finds Jonathan making out with Candice, with his shirt off, on his bed.

General Lane has been replaced at the Department of Defense by Lt. Mitch Anderson.

Superman affirms that he protects the whole world - not just the United States.

Jonathan and Jordan are confirmed to be 15 years old.

Jordan uses his heat vision to light many floating candles at Atlas Pond to surprise Sarah.

Sarah says she's feeing crampy and asks to leave her meeting with Jordan.

Daniel Hart plans to use the settlement money Smallville was recently awarded to renovate the parks., enhance local community services and local infrastructure.

It has been five years since the teachers of Smallville got a pay raise. Hart stumbles over this point when questioned by a teacher, but Lana helps him out.

Clark talks with Kyle about his fight with Lois and how he feels like there's something she isn't telling him. Kyle advises him to let it lie.

The Metropolis Museum (aka The Met) still being repaired following the battle with Morgan Edge's army three months ago.

John Henry looks for Natalie at the museum and discovers it is closed.

Natalie left school after first period, having been unable to keep going after one of her best friends looked at her like she didn't exist.

Jordan comes home and Lois grills him about what he was doing with Sarah.

Jonathan warns Jordan that their dad is probably going to lecture them both about what Jonathan did.

Clark asks Lana if Kyle is jealous of all her work for Daniel Hart's campaign.

Lana figures out that Clark is really needing to talk about Lois not talking to him about her feelings.

Clark hears something close by, kind of like an earthquake, but different.

Kyle bought an old car and is fixing it up with Sarah.

Kyle advises Sarah to take the lead in her relationship with Jordan and be honest with him.

Lois' finally reveals to Clark that she feels guilty about not feeling anything regarding Natalie Irons and is afraid that makes her like her mother, who abandoned her family when Lois was younger.

Clark hears glass breaking and sense an earthquake is about to hit Smallville.

A water tower is crushed by the vibrations.

Clark has another fit and visions of destruction. During this, he sees two young heroes in uniforms with the S-Shield of the House of El on their chests.

Superman confronts Lt. Anderson regarding the other heroes. He confirms they are students from the DoD school for metahumans who have graduated and are ready to serve their country.

Lt. Anderson hands his ELT over to Superman and ignores his objections about using the House of El symbol, saying that there can be more than one Superman.

Lois meets Natalie and says she would like to be friends and thinks it would be good for them to be part of each others' lives.

Sarah is also confirmed to be 15.

Clark talks to Jonathan and Jordan about "being intimate" and coming to him if they have questions. He also tells them that they should be responsible and respect whoever they are with.

Clark confirms he was older than both of them when he lost his virginity, before warning them that Lois is going to be giving them a much stricter talk.

John Henry and Natalie agree to stay on the farm until they find a place of their own.

The episode ends with something big trying to punch up through the earth under Smallville.

Somewhere in the Pacific Ocean.
Metropolis

We don't see the past three months of activity in Smallville.

A solid start for Season 2.