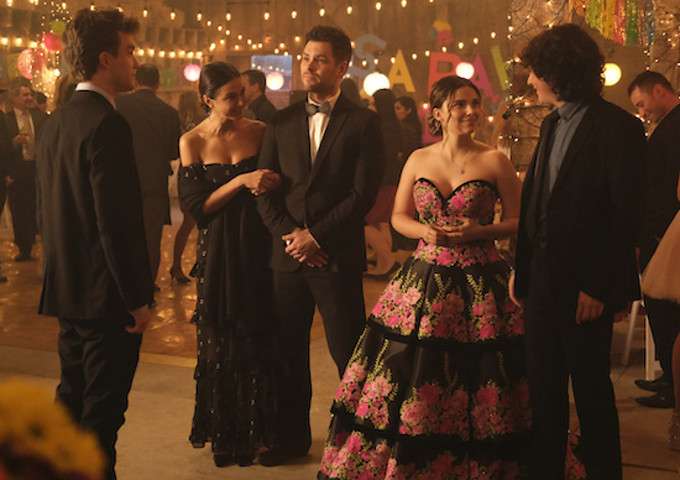 As Chrissy goes searching for the truth about Lois and Ally Allston's organization, Lois and Clark help Lana and Kyle prepare for Sarah's quinceañera. Unfortunately, a problem from the past may ruin the evening and Lana's bid for mayor. Meanwhile, as Clark continues the hunt for Bizarro, Jonathan learns about Jordan's superhero training and is recruited to help him, even as he starts to manifest his own abilities.

The Supermen of America series and Euphoria (anti-drug subplot)

Sofia Hasmik has a great performance as Chrissy this time, perfectly playing her frustrations with Lois, even though we're meant to believe Lois is in the right.

The special effects for the Superman vs. Bizarro fight are top-notch.

The episode title is taken from a Neil Diamond song.

Neither Tayler Buck or Wolé Parks appear in this episode.

As in the comics, Bizarro Superman has freeze vision rather than heat vision.

General Anderson says that the energy field generated by the Bizarro pendant appears whenever Superman or Bizarro Superman get near it. He believes it is empowering them, somehow.

Lois: Chrissy, I know that you're mad at me, but we're supposed to be working on this story together.
Chrissy: Except we aren't. Because whenever I work with you, Lois, I can't help but feel like I'm working for you.
Lois: That's not fair.
Chrissy: May not be fair, but it's the truth. Everything with you is on a need-to-know basis... you deciding what I need to know. Why didn't you tell me the whole Lucy story?
Lois: I didn't think it was relevant.
Chrissy: To whom? You can't just pick and choose what facts you think are important. You did the same thing with Morgan Edge. You only give me the information that you want me to have, and... I wind up looking like an idiot. Makes it really hard for me to trust you.
Lois: I'm sorry that you feel that way.
Chrissy: It's fine. Just confirms what I've always known.
Lois: Which is what?
Chrissy: If you want the truth, you have to find it yourself.

(Sarah and Jordan are on the Kent house porch, having escaped the party.)
Sarah: God, my feet are killing me. I don't know why anybody would willingly wear those.
Jordan: Want me to, like, massage them or something?
Sarah: Maybe later, when we're old and, like, in our 40s.

Bizarro: I should've killed you.
Superman: You tried more than once.
Lara: Why are you here, Kal-El?
Bizarro: To save my world... And yours.

The pendant worn by Bizarro is revealed to be a Allston family heirloom, which Ally Allston was given in 1979 when she was eight years old.

Ally's inheritance was contingent upon her accepting the pendant. Her uncle David discouraged her from taking it, saying that it destroyed her father and their family.

It is said that the pendant is tied to Ally's father's life's work and that he was close to completing it before his death.

Lois makes banana muffins for Clark to take to the hospital for Natalie and John Henry.

Clark plans to go to the hospital to visit Tag Harris, who is still bed-ridden with several broken ribs after the fight with Bizarro Superman.

Lois is starting to think that maybe Lucy was telling the truth about what she experienced and that Ally Allston's talk of shadow dimensions and mirror selves might be real, based on their experiences with Bizarro Superman.

John Henry is reportedly out of the ICU, but is still facing a long road to recovery.

Despite everything that is going on, Lois and Clark have still agreed to host Sarah's quinceañera on their farm.

Sarah does not know who Patrick Swayze is.

The bartender from 204 is identified as Tonya Martinez. She has apparently been trying to call Kyle on his phone for several days.

It is revealed that the Cushings' original surname was Cortez.

Sarah has decided to take back the family's last name as part of her quinceañera. She has yet to tell her grandmother about this decision, however.

Tag tells Superman that he gave the Bizarro pendant to Anderson during his debriefing.

Chrissy complains to Lois that she feels more like she is working for her rather than with her.

Bizarro is revealed to be watching Lois from a distance.

General Anderson refuses to give the pendant to Superman, claiming that there's evidence that it is empowering him and the Bizarro Superman.

Jordan and Jonathan are both able to do 50 push-ups in a minute. Sam says that's impressive for a high-school athlete, but Jordan should be capable of more.

Sarah is revealed to not know how to walk in high heels when she tries on the dress for her quinceañera.

Lois offers to call her father and get him to intercede on Clark's behalf, but Clark says he has to settle things with General Anderson himself.

Clark heads to the dry cleaner to pick up his and Lois' party clothes, as she goes to the Shuster Mines to seek out Dr. Faulkner.

Ally Allston claims her family was chosen to reveal the secrets of what she calls The Ascension to the world.

Ally drugs Chrissy's tea to put her through the Ascension. This process involves her wearing the Bizarro pendant.

Lois finds Dr. Faulkner dead in her office as the Amertek camp, with Bizarro in the same room.

Bizarro flies away rather than try to hurt Lois. This leads Clark to wonder if he is married some version of Lois on his world and if they are chasing the same enemy.

Chrissy wakes up from the Ascension process, after being close to death for some time.

Jonathan offers to spar with Jordan, despite Sam's objections.

John uses Yellow Mist right before he fights Jordan. He is able to easily fight Jordan, dodging his punches and taking him down.

Chrissy describes her time in the other world as if she was her, but not her. Ally claims that the "bizarro" version of Chrissy is her other-half.

Chrissy says that everything in the other world was "off" and that Ally was everywhere in it.

Superman and Lois arrive to warn Ally that Dr. Faulkner is dead and that she may be next.

Dr. Faulkner's first name is given as Kit.

Bizarro is confirmed to be speaking backwards rather than another language.

Bizarro has freeze vision rather than heat vision.

Superman is able to knock Bizarro out by using X-Kryptonite shards as knuckle dusters.

Lois notes that Ally was not surprised with the Bizarro Superman showed up.

Mayor Dean shows up at the quinceañera, despite Lana being certain he'd refuse to show his face there.

Sarah apologizes to Jonathan for not inviting his girlfriend, Candice, due to a limited guest list.

Clark tells Lois that he's holding Bizarro in Tal-Rho's fortress, where the hologram of his mother is analyzing him.

Lois says she hasn't asked Chrissy what she was doing with Ally Allston but she is going to ask her while she is there.

Jonathan is acting more aggressive and argues with Jordan over which of them should be getting trained to be a superhero.

Kyle gets another text from Tonya, telling her she is outside the party.

Jordan tells Sarah about how Jonathan is acting strange.  She says something has to be up and points to her own depression as proof.

Tonya warns Kyle that she told one of her friends about their affair and she thinks that friend might have sold the story to Mayor Dean.

Tonya denies having told Mayor Dean about the affair herself and claims she honestly thought Kyle was going to leave Lana for her.

When Kyle returns to the party, he sees Mayor Dean talking with his mother.

Kyle confirms that the entire Cushing family is taking the Cortez name again.

Chrissy tells Lois that Ally drugged her and about how the visions she had of another world were more intense than when she did mushrooms during her junior year.

Chrissy says that everything Lucy described in her visions about seeing a parallel universe is accurate, but that Ally has taken over the United States and possibly the world in that reality and the parallel version of her father was scared to death of her. She agrees with Lois that Ally is dangerous, but not for the reasons she thought.

Sarah has a panic attack during the father-daughter dance and leaves.

Sarah confronts Kyle over the affair in front of Lana.

Lana had suspicions about Kyle and Tonya, but believed him when he said it was just harmless flirting while blowing off steam after work.

Lana gives a speech about how honest and strong Sarah is.

Clark leaves the party after hearing the Lara hologram say they need to talk about Bizarro.

Jordan confronts Jonathan on his behavior. This angers Jonathan, which causes his eyes to glow red as if he were about to unleash heat vision.

Jonathan asks Jordan to give him some time before he tells their parents because he is sure dad will make him quit football if he has powers.

Bizarro claims to cave to Earth-Prime too kill Ally Allston in order to save his world and Earth-Prime.

The flashback at the start of the episode is set in Metropolis in 1979.

A solid episode with one heck of a twist ending.