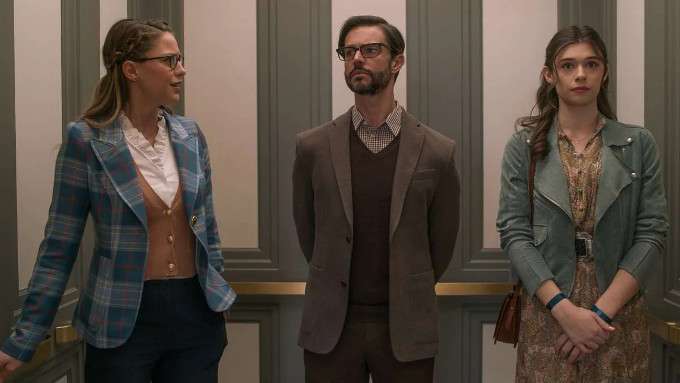 Kara returns to work at CatCo and as Supergirl and tries to introduce her father to life on Earth. Unfortunately, Zor-El's overzealous efforts to join her in protecting the Earth lead to a new threat, as Kara tries to deal with the trauma of her time in the Phantom Zone; a task that isn't made any easier by her latest assignment to interview the survivors of the Phantom attacks on National City.

In her presentation on major media platforms that are doing better than CatCo, Andrea Rojas mentions The Daily Planet (#1) and The Central City Citizen (#4). This doesn't make much sense, given that layoffs at The Daily Planet due to decreased sales were why Clark Kent lost his job in the first episode of Superman and Lois and Iris West-Allen said her paper lost 73% of their readers during the time she was trapped in the Mirror World in The Flash. While it was unclear at the time it aired just when Superman and Lois was set in relation to the other Arrowverse series that year, Kara later makes reference to a story that Iris West-Allen wrote in the same episode where she referenced her drop in readership.

While it's believable Lex Luthor wouldn't have issues with dumping garbage in the ocean, it's a little hard to believe he wouldn't try to recover all the Kryptonite that was apparently dropped into the trash island, given how rare it is supposed to be on Earth-Prime.

Granting that Andrea has always been portrayed as publicity minded, it's still a bit of a jump for her to go from being obsessed with bringing down Lex Luthor to being obsessed with learning all about the Super Friends, based purely upon seeing some files on Lex Luthor's desk. (Shouldn't she be more interested in why Luthor is targeting the heroes?)

The highlight of the episode is Jesse Rath's insulting Oscar and his cry of "I regret nothing!" as he is being pulled into a giant garbage monster.

It's a minor thing, but after every time Barry Allen managed to disappear without consequences for months at a time in The Flash, it's gratifying that the script for this episode shows Kara dealing with the fact that her absence was noticed and that her friends lied to cover for her at her job.

The CGI for Oscar the Robot is well-executed.

The episode title is a play on the classic sitcom Welcome Back, Kotter.

J'onn determines that Oscar bonded with a Teallian, which he describes as a parasitic creature that can inhabit and animate inanimate objects. In the comics, the Legion of Superheroes member Quislet was a Teallian, who rejected his species hive-mind and went off in search of adventure far from their home planet of Teall.

Oscar the Garbage Monster also seems remarkably similar to the DC Comics villain Chemo. Originally created as an enemy of the Metal Men in Showcase #39, Chemo was a living being made of chemicals discarded by scientist Ramsey Norton, who grew into a giant, toxic monster.

Zor-El analyzes Earth's oceans and determines they are dying in the same way Krypton's did.

J'onn determines the fire on the trash island was the result of a fuel leak from a Dominator Warp Drive.

Zor-El plans to save Earth's oceans by modifying the Kelex robot in the Fortress to shrink trash and convert it to energy safely. It does this through a new Coluan energy core. He dubs the new robot Oscar, named in honor of Oscar the Grouch from Sesame Street.

Lena says he did something similar with a high-pressure energy compactor.

Lena says she can decloak Oscar with a signal wave blast.

Brainiac-5 creates a drone-delivered virus that can shut Oscar down.

Brainiac-5: You sorry excuse for a Roomba!

This episode takes place one day after 607.

Brainiac-5 picks up a special cake for a party to welcome Kara back to Earth.

Kara power naps under a yellow sun lamp to recover the energy she spent flying herself and Zor-El to J'onn's ship.

Kara is having nightmares of the Phantom Zone as she sleeps.

Kelly Olsen misses the party, as she's undergoing orientation at her new job with Social Services.

Zor-El says that he intends to go to Argo City to reunite with his wife, but first he wants to see the life Kara has built for herself on Earth.

Nia explains to Kara about how she covered her absence by telling Andrea Rojas that she was in deep cover interviewing Darien resistance leader Miguel de Miranda at Cat Grant's request. Nia originally made this excuse in 601.

Andrea is annoyed when Kara says there is no story, resulting in her having the assignment to cover Supergirl's defeat of the Phantom dropped on her.

Andrea threatens to fire the whole writing staff of CatCo if they are not the #1 news outlet within a month's time. They are currently #8 thanks to the public turning on them after Lex Luthor's acquittal in 602.

Nobody had told Kara about Phantoms attacking National City while she was gone because they didn't want to worry her.

William tells Kara that he started dating a pediatrician named Mary while she was gone and it is getting serious.

Kara and her father team to stop a falling satellite.

Kara and Zor-El discover a garbage island made of cast-off material from Luthor Corp and the DEO 1000 miles off the coast of National City that is full of toxic chemicals.

Kara tries to sell the story of the island to Andrea, but she is uninterested until she finds out Lex Luthor was responsible for the dumping. However, she assigns the article to William and tells Kara to get her an interview with Supergirl.

Lena and Nia have a talk about their nightmares from the Phantom Zone and how Nia is missing her mother even as Kara is reuniting with her father.

Zor-El confirms that Jor-El and Lara Lor-Van designed the Fortress of Solitude.

Kara has a PTSD flashback of Lex Luthor blasting her with the Phantom Zone projector as they look around the Fortress of Solitude.

William determines that the trash island was made by a third-party hired by LuthorCorp and it all, sadly, was completely legal. Andrea still asks him to find a way to blame Lex for it.

Zor-El binge-watched Sesame Street to learn about Earth culture while Kara was recovering under the sun lamps.

Andrea uses her teleportation powers to break into Luthor Manor in search of proof he's responsible for the trash island. Instead, she finds several files profiling the Super-Friends.

Oscar goes haywire after bonding with a Teallian and becomes impossible to track after absorbing Daxamite cloaking tech. He also acquires a force-field.

Brainiac-5 enters into Oscar's trash pile in order to manually release the virus.

Zor-El admits he is afraid to face his wife again given his failure to save Krypton, even if he did save his family and many lives.

It has been nearly 40 years since Zor-El became trapped in the Phantom Zone.

Andrea published William's article on the trash fires without the Luthor angle.

Andrea says CatCo needs to write more articles on the local superheroes and they can make CatCo big again, like Cat Grant did with Supergirl.

Lena tells Nia that she's going to go visit the village where she was born and try to build a connection with her birth mother.

Kara tells Alex about how bad the Phantom Zone was.

Alex tells Kara about her nightmares of losing Kara forever.

Kara references a piece Iris West-Allen wrote in F704 about how Central City rallied after the fight with the Mirror Monarch and how she needs to write something similar about National City moving on from the Phantom attacks.

The episode ends with a thunder storm raging and Nia waking up from a dream and saying the name "Nyxly."

Brainiac-5 takes Zor-El to Argo City at the end of the episode.

A serviceable yet largely flawed episode. While individual parts are groanworthy, the cast makes them work even as the technobabble starts flying and Oscar becomes increasingly implausible.  Andrea is still the show's weak link and it would have been much better if she'd been allowed to gracefully fade into the background at the end of Season 5. At least the romance (muted as it was) between Kara and William has finally come to an end.