Legends of Tomorrow: Season 6, Episode 13 - Silence of the Sonograms 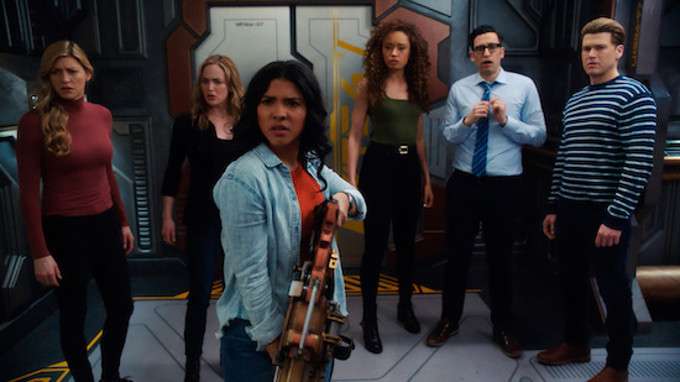 Tensions are heightened on the Waverider, with the Legends on high alert and Bishop's latest clone in their custody. As Ava begins interrogating the super-genius and Gary tries to help Mick through his pregnancy pains, Zari recruits Spooner and Astra to help her figure out what Constantine is trying to hide from her and the team.

The Silence of the Lambs (title, scenes of Ava trying to get into Bishop's head only to have him get into her mind), the Critical Mass story arc of Hellblazer (demon Constantine) and every sci-fi comedy based around a man being pregnant. (Red Dwarf and Junior come to mind.)

Jess Macallan nails the moment in which Ava's mask breaks once Bishop finally gets to her.

Raffi Barsoumian is amazing as Bishop, turning the smarmy hipster scientist into a credible threat, even as we're left wondering how sincere he might be about wanting to join the Legends and find redemption.

In the moment when Zari 2.0 confronts John over his drug use, we see the same steel at the heart of Zari 1.0 and Tala Ashe, who has done such a good job making both versions of the Legend into likeable and distinct yet similar characters is amazing.

The sequence of Bishop and Ava dancing to "Perfect Day" is well shot and the music perfect.

The effects work for Mick's pregnancy is top-notch.

This episode was originally planned to be the season finale.

This is the first episode not to feature Behrad since he joined the team in Season 5.

Bishop claims that he lowered the oxytocin levels in all the Ava clone to inhibit their capacity to feel love and process emotions. Ava thinks maybe this is why she is having a hard time planning the wedding.

Bishop suggests a formula made of mushroom and ginger to ease Mick's birthing pains, which is poured into his ear. According to Sara it doesn't taste half-bad to her alien tastebuds. In actuality, the formula is meant to induce labor, which Gary reveals at the end of the episode.

Astra knows a spell that can restore lost memories.

The potion John has been using to increase his magical power is known as a Scarlet Lady in Hell.

Bishop determines that Mick's children are breach babies, which means they have to come out the nose rather than the ear.

Spooner has a custom gun that can shoot through the metal doors of the Waverider.

Sara: What are you doing here? How are you even alive?
Bishop: What a fantastically boring question.

Zari: John's lying to me, again.
Astra: Huh, glad he's feeling like his old self.

(Ava and Sara are administering Bishop's formula to Mick.)
Ava: I made Bishop think that I needed something from him, and he proved himself to be trustworthy, for now. But believe me, this is just the opening move of our little chess match.
Mick: What does that make me? The pawn?

(The Beast appears before John, wearing his familiar coat and tie.)
Constantine: Oh nice. You're wearing my clothes now, are ya?
The Beast: Well, someone's gotta pick up the mantle and you're in no shape for it, but you don't have to suffer, Johnny.
(A woman's voice echoes around them, whispering "Suffer, Johnny...")
Constantine: (laughs) Yeah, yeah, yeah. Another snort of the Scarlet Lady and I'll be right as rain. Is that it? You know, it's not the first time I've gotten clean.
The Beast: And why haven't you dumped it? You'll never be clean, Johnny.
Constantine: (laughing with a more manic edge) You know, you're not even real. You're just a figment in my imagination, some damn junkie hallucination!
The Beast: And without magic, you're just a pathetic ex-smoker in a trench coat who lies to the people he loves.

The Beast: Can you see John? You'll never be rid of me. I am you.

Ava: Admit it. I'm weird! Why the hell did you have to make me so weird?
Bishop: Look, first off, I didn't make you. Yes, I designed you, but everything you've done in your life, that's your accomplishment, not mine. And you not knowing whether you want a vegan cake or not doesn't matter. (pauses) I'm gonna take that back... vegan cakes are disgusting.

(Astra and Zari have just confirmed John blanked Spooner's memory.)
Astra: Where the hell are you going?
Zari: Oh, I'm just going to break up with my lying dumpster fire of a boyfriend.

Bishop: Sara, you've got this all wrong. I don't wanna hurt him. I wanna help him.
Sara: And why would I trust you?
Bishop: Because I am you.
Sara: You wish.

Bishop: You know what they say when you fight yourself? You're destined to lose.
Sara: Destiny's so last season.

Constantine: Look, you deserve someone who is bloody fantastic, all right, not some pathetic has-been, honestly.
Zari: I have spent my whole life trying to be somebody for everyone else. When I'm with you, I can just be myself. That is the greatest gift. I love you. Not your magic. You.
(John leans in but Zari gives him a firm look.)
Zari: Hey, I'm not an idiot. You have told me so many lies. I need the truth. The truth.
Constantine: The truth is... I don't know. I don't know who I am without magic... I don't know how the hell I'm gonna get through this. I mean, I want to... but if you still love me after everything that I've put you through then... I wanna do it with you.

The unseen figure from the end of 612 is confirmed to be Bishop.

Bishop says that his current incarnation is the last since his data was corrupted when his lab was blown up and before his upload was complete.

Bishop tries to talk Sara into letting him join the Legends. She locks him up and gives Spooner orders to shoot him if he does anything to escape.

Bishop notes Ava's engagement ring and that Mick is still alive, noting that Kayla had strong thoughts about him ceasing to exist.

Gideon determines that the new Bishop clone is missing 6% of his original DNA structure.

Ava, devout serial killer podcaster that she is, asks for a chance to profile Bishop. Sara reluctantly agrees but says she and Nate will be listening in to the interview.

Constantine wakes up to find Zari waiting for him. She asks why he has a scar when she stabbed The Beast and demands the truth. John says he thought it was all part of the game. Zari is skeptical but agrees to let him sequester himself until he gets his new powers under control.

Astra agrees to help Zari figure out what John is hiding, but says they should talk to Spooner about the Fountain of Imperium.

Ava's particular model of Ava Clone was dubbed Bossy Ava, but Bishop says he wanted to call her Boss Ava.

Bishop claims that he's realized he made a mistake and that he sees Sara and Ava as the closest thing he has to family.

Bishop also claims that he can help Rory, having recognized the symptoms of a human mating with a Necrian.

Bishop claims to have spent eons trying to meld humans and aliens but never thought of "the old fashioned way."

Spooner has no memory of her time with John and the Fountain of Imperium after the fascists coming into the cave. This leads her to conclude John cast a spell on her.

Astra suggests Spooner let her work a spell to restore her memory before they confront Constantine. Spooner refuses to abandon her guard duty until Ava takes over.

Bishop claims to be a medical doctor and offers to look at Constantine, having overheard something is wrong with him.

The Beast has taken on John's form and is taunting him, claiming to have always been a part of him even before his addiction to the blood potion.

Ava has never been to a wedding before and was known as the party pooper of the Time Bureau.

Ava's favorite flower is a cactus.

Ava does not like appetizers and doesn't understand why people need to eat before eating a full meal.

Bishop has been reborn over 200 times. That was, at least, where he stopped counting.

The planet where Bishop met Sara is identified as Pliny X19.

Bishop claims to have changed because Sara taught him humility.

Astra restores Spooner's memories of 610 and how John drank some kind of potion after being found unworthy of the Fountain of Imperium.

Astra tells Zari they shouldn't confront him until they figure out what the potion he's taking is.

Bishop suggests "Perfect Day" from Lou Reed's album Transformer as the perfect song for them to dance to at their wedding. He winds up dancing with her with it and suggests they could have a father-daughter dance at the wedding.

Ava has a breakdown after Bishop talks about wishing the could be part of the wedding and leaves her gun behind in his cell.

Gideon confirms that Bishop is 100% human but has yet to identify the other 6% of his new genetic code.

Ava says she believes Bishop is sincere about seeing them as family.

John tells Zari that he loves her as she comes to check on him.

John denies having anything to say when Zari asks him if anything is wrong.

Mick begins to experience contractions every six seconds as he goes into labor - a sensation which feels like eating a handful of hot peppers and then passing large pointy rocks through the head hole, according to Gary's father. In Mick's case, however, the babies will have to come out through his ears.

Delivering Necrian babies can take up to two weeks, according to Gary.

Mick agrees to make Gary the godfather of his 48 children, to his delight.

Zari confronts John regarding the blood potion and forces him to choose between her and it. He chooses her.

After John says he is going to lock himself in his manor until the withdrawal symptoms are over, Zari says she is going to stay with him.

Ava says that she never had a real family and isn't really sure that she knows how to love someone properly, especially after what Bishop told her about trying to breed the ability to love out of the Ava Clones.

Sara assures Ava that she love her.

Ava shows Sara what she had planned for the wedding so far. She selected a lemon buttercream cake topped with maraschino cherries and a tapas bar for the appetizers. Sara says these are just what she wanted, but goes pale when Ava says Bishop did most of the picking.

Gideon determines that the 6% of Bishop's DNA that wasn't his belongs to Sara Lance.

The Bishop clone also had knowledge of Sara's passwords and escapes from his cell using the System Override phrase - Spaniel, Broad Tricycle.

The Bishop clone also has all of Sara's fighting knowledge and is able to knock her out.

Bishop delivers all of Mick's babies, who are healthy, as best as Gary can determine.

Bishop voluntarily surrenders himself to be locked in the brig again, saying he wants a chance to earn the team's trust. Sara is still skeptical.

John affirms that he wants to get clean and Zari says she wants to be with him but he is not out of the woods yet after all the lying he did.

Bishop tries to contact Constantine through the coms, having stolen Rory's implanted communicator while delivering his babies. John removes his own communicator to cut off the signal.

The Beast throws John around and seems to take over his body, calling Bishop and asking what he wants as he starts smoking a cigarette.