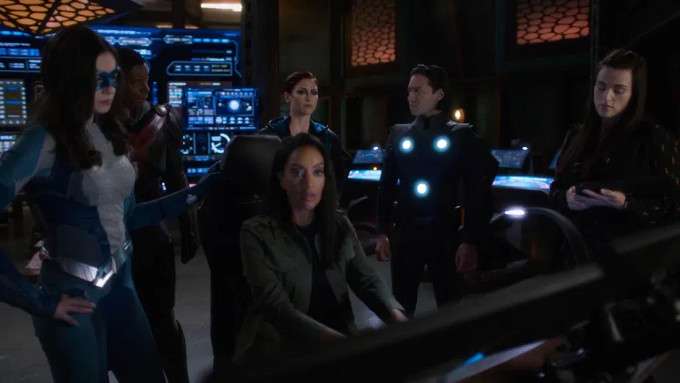 As the Super Friends enter the Phantom Zone in search of Kara, each of them is forced to confront their own worst fears, while Kara faces her own crisis of faith.

Star Trek (the general design of the Watchtower bridge with each team member having an assigned role and console), Harry Potter (the fear powers of the Phantom are based on the Dementors), The Abyss (the effects work for the kelpie) and the "Psirens" episode of Red Dwarf (heroes hallucinate while fighting telepathic creatures).

J'onn makes reference to the Phantom Zone being the native dimension of the Phantoms, but it was established in 603 that they were an alien species from the same system as Krypton.

It's hard to pick out one moment as the ensemble get a lot of great interactions together between characters who don't normally get to talk to each other. Still, the best is probably Lena and Nia bonding over the loss of their mothers, thanks to the way Katie McGrath and Nicole Maines play off each other.

David Harewood does a masterful job of playing up the tension of the various nightmare sequences. Indeed, the very first one plays out so smoothly most viewers didn't guess it wasn't real until after the second dream sequence with Lena started.

The special effects work is of cinematic quality, particularly the effects for the kelpie.

This episode was directed by David Harewood.

Kelpies are monsters from Celtic mythology said to haunt various waterways. Most legends have them taking the forms of horses, but they are shapeshifters who can also take on human shape. Some kelpie stories involve young men and women who were invited to swim by an attractive stranger, only to wind up being drowned and eaten by the kelpie.

The Phantoms have different powers within the Phantom Zone, attacking people with Fear Visions of their worst nightmares made real.

Kelly teaches the rest of the team some basic grounding techniques that can help a person with anxiety regain control in tense situations. This involves naming things the person knows for certain to be real.

Lena modifies one of the DEO's yellow sun grenades to act as an anti-Phantom weapon.

The shields of the Tower can only withstand the Phantom Zone for two hours.

Dreamer: You ever just think how wild it is that you can, like, make a portable sun?
Lena: Says the woman who can see the future and wield dream energy.
Dreamer: (quietly) Yeah, right.
Lena: Your gloves, by the way, are amazing. The way they convert your power into physical form, you know, how do they work?
Dreamer: Um... (chuckles softly) I don't know. Brainy made them. I... Honestly, I should probably know more than I do, but the one person who had answers is gone. Without my mom, all I have are questions.
(Lena stops smiling as Dreamer realizes what she just said.)
Dreamer: I'm sorry. I know you lost your mom, too. I didn't mean to...
Lena: Oh, no, no, no, it's okay, really. I get it. I miss my mom every day, too.
Dreamer: It really sucks, doesn't it?
Lena: Yeah, and it doesn't really get any easier. Especially in light of the family I have left.
(Lena sighs. Dreamer looks up at her and smiles.)
Dreamer: Good thing this is our family now, right?

Brainy: May I just say I'm quite glad to have you aboard this mission.
Kelly: That's kind of you. I'm just trying to stay out of the way until it's time for me to help Supergirl. Brainy: On the contrary, I've been challenged by my emotions of late. (consider this) Okay, always. And given the imminent risk of a Phantom-induced response, I'd greatly value your expertise.
Kelly: Well, hopefully everything goes according to plan, and you won't need it

(The Tower has just passed through turbulence. Everyone is looking dazed.)
J'onn: Brainy?
Brainy: I'm okay, but it seems like the rest of our team has been compromised. That electromagnetic turbulence. It caused a malfunction in the Phantom's containment unit. Right now, it's just enough for its power to leak out and affect our teammates. But the whole unit's compromised.
J'onn: Why aren't you and I affected?
Brainy: It's possible your Martian physiology and psychic powers have safeguarded you. Your psychic bond with Malefic might have conferred to you some measure of resistance.
J'onn: And your Coluan nature is doing the same for you?
Brainy: Well, sort of. My 12th level intellect allows me to compartmentalize my fear. That and Kelly's coping mechanisms. But I assure you, I'm still.. very much feeling it.
J'onn: You are?
Brainy: For me, this entire room is filled with balloons.
J'onn: (confused) Balloons?
(As he says this, party balloons begin falling from the ceiling.)
Brainy: It's balloons, J'onn. (gesturing to the balloons only he can see) Balloon, balloon, balloon, balloon. Thin sheets of rubber holding in all that pressure, not knowing when to pop, balloon. J'onn! (grabs J'onn's shoulders) They must be stopped!
J'onn: Okay. I don't have time to unpack all that...

Zor-El: There's always hope.
Supergirl: Hope is naïve. I was naïve. And arrogant to think that I could ever actually fix anything. And worse... my friends think that they can, too. And they're just going to die because of it.
Zor-El: You can fix things. You did. You fixed me. I cried so many tears here. I cried for you. For your mother. For Krypton, my brother, my entire life... I cried for everyone I ever lost, all the people I loved and would never see again. I cried a river, an ocean of tears, until there was nothing left in me. Until you came and you filled me up with your spirit, your love. And now I won't give up again. Even if your friends never find us, we'll find our way out. I know we can because we're together. And together, nothing can stop us. Do you believe me, Kara? Because I believe in you.

The area of the Phantom Zone around the dimensional anchor begins to destabilize, resulting in earth tremors.

Zor-El is still limping from his earlier injuries in 604.

Kara is wounded by a phantom. The attack leaves her fearing that her family will get themselves killed trying to save her.

Brainiac-5 and Dreamer return three days after they left to go back to 2009 Midvale.

M'Gann has agreed to patrol National City in the absence of the rest of the Super Friends.

J'onn reveals that the Watchtower is also a fully functioning spaceship.

J'onn and Alex argue over which of them should leave the ship to get Kara once they find her.

As the shields fail, the Phantom escapes and begins attacking each member of the team with their worst nightmares made real.

Alex's nightmare involves her need to control everything endangering the team, as she is wounded by the Phantom, locks J'onn up in the brig after he insists that she be quarantined, and Alex trying to flush herself out the airlock after the Phantoms in the Phantom Zone are able to track the ship through her.

Lena's nightmare involves the rest of the team being killed by a Kelpie - a monster that has always terrified her because it drowns people and Lena's mother died while drowning in front of her, when she was a young girl.

Lena's only keepsake of her mother is the book of folklore she read to her when she was young.

Kelly's worst nightmare involves being helpless in a crisis situation and endangering the super-powered and highly trained people around her (especially Alex) because they are too busy worrying about her to do their work.

In the dream, Alex and Kelly recall their first meeting in 415.

In Dreamer's vision, she finds a thimble with an image of a the Tower, cracked and with energy leaking from it, inside an empty containment unit.

Dreamer thinks her vision means the Phantom will escape. She later realizes it was telling her she had to "contain" the problem and protect the Tower by sewing a breach in the hull shut with her powers.

Martians are apparently immune to the effects of the Phantom psychic fear attacks. Coluans are not, but sufficiently intelligent Coluans capable of compartmentalizing their fear can fight through the anxiety attacks.

Brainiac-5 has a fear of balloons. His worst nightmare is being surrounded by them.

J'onn fights the Phantom and contains it,

In Alex's nightmare, she takes control by shooting out the glass in the airlock and going into the Phantom Zone to face whatever is out there.

In Lena's nightmare, she confronts the kelpie and it reshapes into her mother.

In Kelly's nightmare, she manifests a shield like the one James Olsen used as Guardian.

In Nia's nightmare, she is left screaming as Brainiac-5 is swept into space.

Zor-El is able to drag Kara out of her depression as a mob of Phantoms find them.

The Phantoms are driven off by Lena's sun-bomb, which also gives Kara the power she needs to fly Zor-El and herself to the ship.

The episode ends with the reveal that Nyxlygsptlnz is clinging to the outside of the Tower.

We are told that three days passed between the end of 604 and Brainiac-5 and Dreamer's return from the events of 606. Lena, Alex, Kelly, J'onn and M'Gann spent that time preparing for the trip into the Phantom Zone.

A solid episode where the entire cast gets a chance to shine. Would that we'd gotten something like this opening the first half of the final season instead of ending it! It's going to be a long wait for August and the final 13 episodes.
Posted by Starman at 10:03 AM