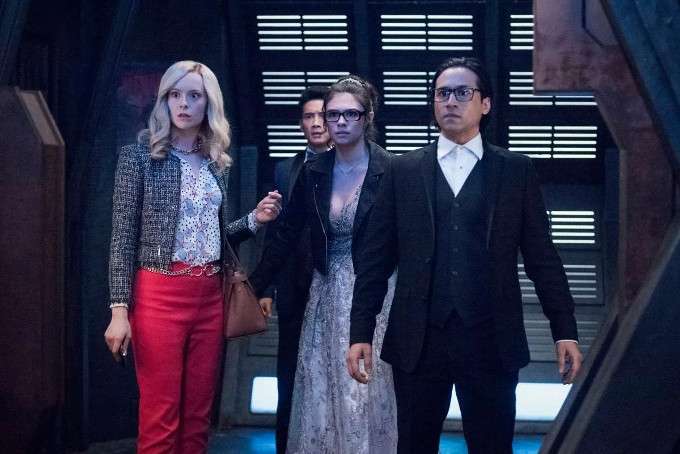 The mission to recover a sample of Kara's DNA becomes more complicated when Nia and Brainy are captured by aliens looking for rare species for their zoo. Unfortunately, even if they can win free and not disrupt the timeline and Kara's senior prom, a young Cat Grant could still spoil the whole thing.

Back To The Future (the time-travel theme and the school dance in a small town setting), the show Riverdale (Kara and Kenny solving mysteries in a small town setting), the Guardians of the Galaxy movies (Naxim Tork appears to be somewhat modeled on Michael Rooker's Yondu) and the Superman: The Animated Series episode "The Main Man." (Storyline involves an alien zookeeper hunting for a Kryptonian.)

During the scene where Kara and Kenny exchange corsages, the song "Bulletproof" by La Roux plays in the background. The song was released on June 21, 2009 but Kara and Kenny's prom takes place on May 26, 2009. (Perhaps the release date is different in the Arrowverse?)

Logically, there should be an extra Kara now running around the timeline one-hour before the meteor strike after Brainy, Nia and Kara return from earlier that afternoon.(Maybe the extra Kara was erased from the timeline after she was done saving Nia and Brainy?)

Again, Isabela Vidovic is so stunning as a teenage Kara you almost can't believe she isn't Melissa Benoist brought back in time.

The chemistry between Jesse Rath and Nicole Maines sizzles.

This episode marks Chyler Leigh's debut as a director.

The force-field which Naxim Tork uses is a power-dampener that inhibits alien powers. However, a blast of Kryptonian heat vision from outside the field is enough to disrupt it.

Naltorians can experience dream echoes of visions they'd had previously when exposed to the energy of a Bismolian ship.

Bismolian energy is trackable for half a light year.

Nia can use her powers to put a person to sleep.

A bridging connector in the right place can blow the fuse in an energizer.

(Kenny is rather depressed over his ability to be useful in an alien prison.)
Kenny: The question is, how'd I get in here. Oh, that's right. I tried to take on the big dogs and be a hero for my girlfriend. Except I forgot that you can't take on the big dogs when you're just a dumb, human squeaky toy.
Cat: Stop that. And you listen to me, Kendall Li!
Kenny: It's Kenny
Cat: First things first. Cut the self-deprecating drivel. You're not a dumb, squeaky toy.
Kenny: You don't even know me!
Cat: I am a journalist, trained in the art of observation. In two minutes flat, I could see that you are preternaturally intelligent and deeply courageous. How many men would sacrifice themselves to hostile aliens to save their girlfriend? Damn few. And how many of them would know that a bridge connector could hack spaceship technology? None. You've got the makings of a hero, Kendall. Own it.

Nia: How's it looking?
Brainy: Ah, not bad. In almost every scenario I can devise, we have a success rate of nearly 20%.
Nia: That's a failure rate of 80 %.
Brainy: (forced cheer) Oh, yes It's terrible.

Brainy: We have irrevocably changed space and time.
Nia: You say that a lot.
Brainy: Yes, but this time it's true!

Kara: It was awful. Under those police-issued flashlights, with the reporter asking me questions and... and the cops coming in. In that moment, I saw my future, and I'm only 17! I don't know anything. I... I don't have a driving permit. Eliza's only let me do the laundry once... and I'm not even sure I know how to make rice. I don't know what I want my future to look like, but that wasn't it. So, please, let me help you find the reporter and change things back.

(Brainy has just been asked by a young Alex what is going on.)
Brainy: It is a wild story. It involves alien hunters, large explosions... and, well, an excess of formal wear. So, at times, it may seem improbable.

(Nia is trying to cover while talking to Cat.)
Nia: I'm just a journalism major at a local college.
Cat: (eying Nia's gown) It's a bit formal for college.
Nia: I'm minoring in performance art.

Brainy: You were great today.
(Nia looks down, embarrassed. Brainy sits down next to her, looking her in the eyes.)
Brainy: No. Hey, Nia. You were. You conjured the dream world into reality... and you interpreted your dream about Cat, and used that information to save the space-time continuum.
Nia: I was only able to interpret my dream because I've lived through Cat Grant.
(Brainy leans in and kisses Nia, cutting her off. She's stunned. He looks at her, love in his eyes, as he continues.)
Brainy: You saved us. And when we save Supergirl from the Phantom Zone, it will be because of you.
(Nia smiles and meets his gaze. Tears are welling up in his eyes.)
Nia: Brainy, are you crying?
Brainy: (chuckles and rubs his eyes) It's just... (deep breath) I've been so consumed with negative emotions lately, I... I forgot how the good ones felt. Maybe that's the lesson of high school. You're not meant to suppress the bad emotions, you're simply meant to endure them. So you can appreciate the good ones when they come.
Nia: Mmm. What are you feeling now?
(Brainy hits the ignition of the ship, sending them back to the future.)
Brainy: Hopeful.

Kara overhears Brainy and Nia being captured by Naxim Tork while at the barn with Kenny.

Kara flies to them while Kenny runs through the woods.

Kenny runs into Alex, who was called by Nia, on his way through the forest.

One of Kenny and Kara's maneuvers is Speed Racer, where Kara moves past a target at super-speed to distract them. She does this to Naxim Tork.

Cat Grant films the fight between Kara and Naxim Tork with a drone.

Alex, Nia and Brainy get to see Kenny's barn lair as well.

Brainy lies and says that he's contacted the proper intergalactic authorities to make sure Naxim Tork is imprisoned. In truth, he has them imprisoned inside their ship, cloaked it, and plans to send them to Uruguay where they can be captured in three days by the DEO, per the original timeline.

Nia has another dream vision of the cage. This time it is empty and she doesn't hear the pink cougar behind her until it is too late.

Alex apologizes to Kara for pushing her to make a choice about Kenny and college. She says she was afraid she'd have to put her life on hold to look after Kara, but she thinks Kara can handle anything that comes her way now.

Kara says she's made a choice but hopes it is the right one.

Alex goes to watch the meteor shower while Kara goes to meet Kenny.

Kara decides to go to the prom without a mask, despite it being a masquerade ball.

Brainy and Nia share a dance on-board the Legion ship after changing into new formal attire.

Cat Grant is able to uncloak Naxim Tork's ship by throwing rocks at it. She then somehow manages to open it up by randomly pushing buttons.

Cat Grant was still using a Blackberry phone in 2009.

Kara tells Kenny that she loves him and wants to stay in Midvale with him.

Somehow, things are different when Kara hits the meteor this time. She still crashes through the roof of the Midvale High gym, but it fragments in a way that the piece with her blood on it doesn't wind up on the baseball field, as Brainy predicted.

Kara survives the Kryptonite exposure, but is left powerless as Maxim Tork shows up, demanding the Kryptonian surrender themself.

Kenny turns himself over to Tork.

Alex does not know what Kryptonite is at this point in time and neither does Kara.

Nia and Brainy tell Kara that they will rescue Kenny and knock her out with Nia's powers to prevent her from turning herself in to Tork to get Kenny freed. They also lock her and Alex in a closet.

Alex learned how to pick locks in college.

Kara gets a second wind after stepping into direct moonlight.

Nia has another dream vision of the empty cage and the cougar behind her. This time, she manages to catch the cougar with her powers and sees two initials - PW - engraved on the cage.

Nia manifests another new power - the ability to bring objects from her dream into the real world. Brainy refers to this as lucid dreaming. She sets the pink cougar loose on Naxim Tork and Mitch.

Upon finding out Cat Grant has been captured along with Kenny Li, Nia realizes what her dream meant. The pink cougar was symbolic of Cat Grant and her being the real threat to Kara's future.

Kara attacks Naxim Tork and Mitch on their ship. She accidentally punches them into a control panel which releases all the creatures on the lower level of the ship. This includes a nest of Plutonian land sharks.

Naxim Tork and Mitch use an escape pod to flee the scene of the fight.

The Midvale police show up and surround the alien ship, arresting Alex, Kenny and Cat as they try to leave and Alex as she tries to run to Kara.

Nia points out that they can travel back in time to a few hours earlier and focus on keeping Cat Grant from getting involved to prevent all this from happening.

Kara breaks her handcuffs and follows after Brainy and Nia, stowing away on their ship.

Brainy reluctantly agrees to let Kara help them change things, but only if she stays close.

Brainy and Kara run into Alex and Kenny in the woods.

Hearing Cat complain about Perry White leads Nia to realize what the PW on the cage from her dream meant.

Nia talks to Cat and convinces her that she's too good to keep working for Perry White and that she doesn't need to prove anything to him. This inspires Cat to quit working for the Daily Planet and to start building CatCo Worldwide Media.
Kara and Brainy are able to get Alex and Kenny to go back to where they need to be going, without any questions being asked about why Kara is already in her formal wear.

Brainy, Kara and Nia are taken back to one hour before the meteor almost hit the school.

Cat Grant quits her job with the Daily Planet and tells Perry White to stop calling her CJ.

Brainy launches Naxim Tork's ship and sends it off to be retrieved by the DEO.

Kara stops the meteor, as before, but this time it breaks properly, allowing Brainy and Nia to get the piece with her blood on it.

Kara asks Kenny to come with her to NCU but he tells Kara that he needs to figure out how to save himself and find a life outside of being her sidekick.

Kara and Kenny abandon the prom for a night of star-gazing and Monty Python.

Nia and Brainy return to the present with Kara's DNA intact.

While not as strong as the first part, this is still an enjoyable episode thanks to some stellar performances and witty dialogue. This episode makes the case for both a Midvale prequel series and a spin-off for Brainy and Dreamer once Supergirl comes to a close.
Posted by Starman at 5:00 PM