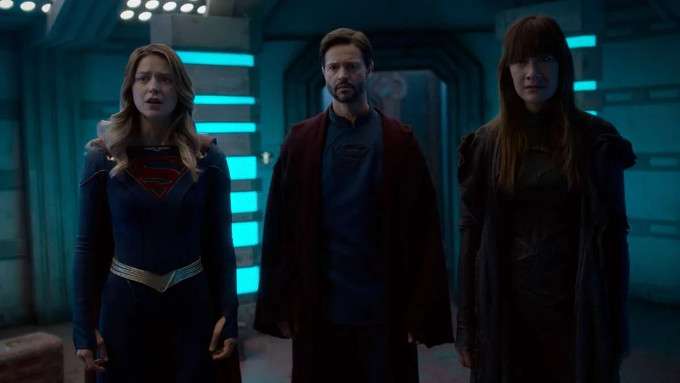 Kara finds a way out of the Phantom Zone, but it is not without risk. Meanwhile, Lena joins the Super Friends in their efforts to stop the phantoms threatening National City and rescue Kara. Unfortunately, when the two missions come into conflict and Lena is forced to choose between the possibility of losing Kara forever or fighting the phantoms, she begins to doubt her place among the heroes.

Superman: Earth One (mention of the planet Dheron), Supergirl: The Movie (Kara and her father needing to escape the Phantom Zone), Ghostbusters (evoked by Brainiac-5 upon seeing Lena's Prototrap) and Superman:The Movie (the mirror acting as the portal out of the Phantom Zone.)

Brainiac-5 talks about the pieces of a soul repelling each other like magnets, but M'Gann reports the opposite effect as she approached the Prime Phantom's lair.

Logically, the chief threat of this episode is completely illogical. The Super Friends sacrifice their best chance of being able to track Kara because they don't want to risk losing M'Gann, even though she should be fine if they successfully destroy the Prime Phantom's chrysalis and M'Gann is not given the chance to make the same noble sacrifice Kara made three episodes earlier.

Nyxlygsptlnz is a textbook example of Stupid Evil. Had she maintained her façade for a few more minutes, she would have been on Earth, all powerful and Kara wouldn't have been able to stop her. Instead, she attacks Zor-El for no reason (despite working to save him last week) and confesses her treachery to Kara, to whom she is utterly dependent on escaping the Phantom Zone!

Katie McGrath and Chyler Leight's interactions are totally on-point and the best dialogues of the episode involve the two of them playing off one another.

This episode marks the first one in Season 6 to open with Kara's updated narration. The new narration does not make mention of the DEO.

At one point Braniac-5 mentions the planet Dheron and a Phantom invasion of that world. In the comics, Dheron is the 5th planet of Rao's star system. Krypton is the 4th planet. In the reality of Superman: Earth One, the two planets went to war with one another, due to Krypton having more resources than Dheron.

Phantoms have the ability to sense life force and can hone in on a specific soul signature, even within the Phantom Zone. M'Gann theorizes she can use this ability to track Kara. This power can also be used to track Phantom Prime's lair and where he is holding the souls he has captured since coming to Earth.

Brainiac-5 estimates a 99.999% probability that freeing the captive souls will restore all the people changed into Phantom progeny.

Lena combines a DEO Protogun and her portal technology to create what she calls the ProtoTrap - a device which traps Phantoms from a safe distance and teleports them directly to a containment pod.

The portal out of the Phantom Zone resembles a mirror, only instead of a reflection it shows the way home. It is programmed so that only a righteous person may activate it.

According to Brainiac-5, the Double Soul Dilemma is a problem caused by a soul being split into two parts. The pieces will act like magnets and repel one another.
When a Phantom reaches maturity, it becomes unstoppable and the souls it captured cannot be restored, due to a chrysalis made by the Phantom hardening to the point that nothing can penetrate it.

Lena develops a way to replicate a Phantom's soul tracking powers using Q-Waves and nanobots. The nanobots map the brains of the Phantom Progeny. However, this method still requires a DNA sample in order to calibrate the right frequency to track a subject.

The Kryptonian data crystals used to create a holographic simulation of a person contain a core digital record that replicates the person's life force.


Dialogue Triumphs
Kara: (v/o)  My name is Kara Zor-El. I'm from Krypton. I'm a refugee on this planet. I was sent to Earth to protect my cousin. But my pod got knocked off course. And by the time I got here, my cousin had already grown up and become... Superman. I hid who I really was until one day when an accident forced me to reveal myself to the world. To most people, I'm a reporter at CatCo Worldwide Media. But in secret I work with my adopted sister and my friends to protect my city from anyone that means to cause it harm. I am Supergirl

Kara: Family isn't about blood or last names. It's about the people who love you for who you are and stand by you no matter what. And just as my sister Alex has always been there for me, so have my friends. They're my family, too. Anything is possible when you have family who love and support you.

(Alex gives Lena the crystal holding Kara's hologram.)
Alex: The core of this crystal contains Kara's digital life force. I would like you to use it for the device.
Lena: What?
Alex: You said you need a piece of my sister to track her in the Phantom Zone.
Lena: Yeah, but if I extract that, you'll lose the recording forever.
Alex: Well, what matters most is that we get back the real Kara. And you said that life force can do that, right?
Lena: Yeah, I mean, I'm hopeful, but there's no guarantee.
Alex: I trust you.
Lena: Thank you.

(Alex and Lena are arguing about using Lena's scanner to find the Prime Phantom instead of Kara.)
Alex: We'll find another way. There's always another way. She taught us that!
Lena: We have a way now! How can you choose to save anyone else over your own sister?
Alex: Because if I don't, countless lives will be lost. Kara would always choose saving others. That's just who she is. And how do you think she would feel if we rescued her and she found out that we let thousands, maybe hundreds of thousands of people die, just so we could have her back? Supergirl relies on those that she loves to follow her example. So please don't make this any harder than it already is. Give me the device.
Lena: Alex, I hear what you're saying... but I have to bring Kara back. You see, it's my fault. It was my brother who sent her to the Phantom Zone, it was my experiments that empowered him. It was my war with Supergirl that started all of this. So if this is my only chance to make it right, then I have to do it.
Alex: Okay, Lena, listen to me. Nobody blames you for this. Kara doesn't blame you for this. You two already forgave each other for everything that happened in the past. So it's time for you to forgive yourself. And all that really matters is that you did the right thing today. So, please give me the tracking device.
(Lena hesitates. Alex reaches down and summons the tracer to her hand using her
Alex: I'm sorry, but I can't take no for an answer.

It is revealed that Nyxlygsptlnz's at the end of 603 did successfully get Kara, Zor-El and Nyxlygsptln within walking distance of the dimension anchor.

As the episode opens, the Super Friends till have five Phantom progeny contained.

M'Gann has a nightmare of being chained down in a cold place.
Nia gives Lena her first official tour of the Watchtower.

Lena invents a special gun that can trap Phantoms and instantly teleport them into a containment pod.
According to Brainiac-5, the original Ghostbusters is a perfect movie.

The Super Friends are able to track the Prime Phantom to the Noonan's in Grand Central Station.

While fighting the Phantoms, Dreamer has another vision of Alex and Kara as teenagers in Midvale.
M'Gann attempts to track one of the captures souls, but begins to lose herself as she approaches the Prime Phantom's lair.
Kara finds the way out of the Phantom Zone, but the mirror powering the portal is broken.
Kara reasons there must be a spare part for just such an emergency and goes off in search of it among the Fort Rozz supply barracks.

It is determined that M'Gann cannot get too close to the Prime Phantom's lair or it her soul may be drawn to the piece of her that was captured.

Brainiac-5 realizes that they can save the people turned into Phantoms by destroying the Chrysalis, but doing this will remove M'Gann's ability to track Kara.

Lena offers to find a way to replicate M"Gann's tracking power in case they can't find Kara before they have to stop the Prime Phantom.

Dreamer tells Brainaic-5 about her dreams of Kara and Alex as teenagers and how the dream has been repeating.

Brainiac-5's favorite comfort food is donuts. He is particularly fond of strawberry glaze with sprinkles and compares it to Kara's fondness for dumplings.
Kara is able to find a replacement mirror after searching 24 storage rooms.

While Kara is gone, Zor-El is attacked by the scar-faced prisoner whom captured him earlier.

Zor-El's ankle is broken in the attack.

Kara and Nyxlygsptln leave Zor-El behind to get the portal fixed, with the intention of coming back for him later.

Alex gives Lena the crystal containing Kara's hologram from 601 to use for her tracker..

Dreamer has another vision of Midvale and determines that the chrysalis is almost completely solid.
Brainiac-5 calculates that they have an hour to save the souls trapped in the chrysalis based on this data.
J'onn refuses to risk M'Gann getting too close to the chrysalis and becoming lost.

Alex suggests using Lena's tracker to find the Prime Phantom's database, even though recalibrating it will cause them to lose the one sample of Kara's DNA they have.

Lena objects to this, but Alex takes the tracker from her anyway.

Nyxlygsptln tries to get Kara to abandon her father.

Nyxlygsptln reveals that she took the form of the scarred-prisoner and attacked Zor-El.

Nyxlygsptln couldn't get the portal to work with Kara activating it because she is not righteous. She had planned to go to the 5th Dimension first but now wants to go to Earth and wreck it before reclaiming her throne.
J'onn, Dreamer, Alex and Brainiac-5 go into the sewers to track the Prime Phantom.

J'onn and Brainiac-5 are overpowered on the way to the chrysalis.
Alex is able to destroy the chrysalis, which transforms all the progeny back into humans.

Kara destroys the portal rather than let Nyxlygsptln use it to go to Earth.

Lena says she doesn't belong with the team but Alex says that is nonsense.

According to Alex, Lena is the only other Super Friend with decent taste in scotch.

Dreamer keeps having visions of Kara and Alex as teenagers in Midvale.

The Prime Phantom is captured.

J'onn theorizes they can use the Phantom like a bloodhound to track Kara if they can get a DNA sample. This leads to the idea of time-traveling to a point when Kara had been injured.

In remembering times Kara was injured by Kryptonite poisoning or a solar flare, Alex remembers the fight with Red Tornado (106) and an incident back when they were in high school.

The dimensional anchor in the Phantom Zone is completely destroyed.

Nyxlygsptln suddenly becomes a Stupid Evil villain who confesses her evil nature because she is evil.

An idiotic story that is once again salvaged only by some excellent performances. The Phantom Zone storyline has dragged on far too long and it is cold comfort that we're getting a two-part time travel story that will presumably eliminate the need to see Kara not doing much in the Phantom Zone for two weeks.
Posted by Starman at 11:02 PM