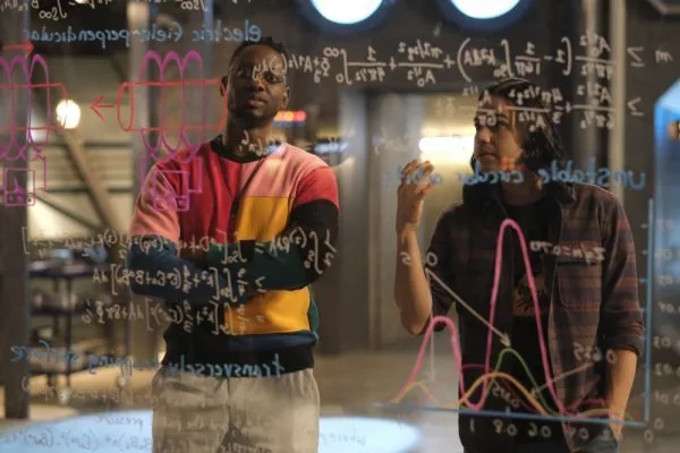 The Forces go to war, with Central City caught in the crossfire and the world facing a second Big Bang unless Barry Allen and Iris can find a way to unite their "children."

The Flash comics of Joshua Williamson (concept of Strength, Sage and Still Forces)

The plot of this episode doesn't even try to make sense, with character motivations changing from scene to scene and it being totally inconsistent as to the Forces being children in host bodies or the hosts seeing themselves as Barry and Iris' children.

Again, the power level of the Forces is inconsistent, as the Speed Force is apparently capable of destroying the other forces by itself, but it needed Barry's help to kill Alexa in 708.

Also, Nora threatens to destroy the city, only to reveal that the storm threatening Central City is due to the other forces, not her.

It also doesn't make much sense that the Speed Force can't go back in time to when it didn't exist, but Barry can using his powers.... which come from the Speed Force.

Granting that Iron Heights may not be in Central City's district (Pre-Crisis, it was halfway between Central City and Star City) why weren't Kristen Kramer and her meta-cure bullets there trying to do something about the escaping criminals? Jurisdiction didn't seem to matter when she showed up in Keystone City with a CCPD riot team to capture Frost in 707 and this would seem to be an ideal time for her to make her point about removing the powers of meta-criminals.

Why, apart from needing to give Team Citizen something to do in this episode, are Allegra and Kamilla tasked with getting people off the streets when Barry could do the job faster and more effectively?

It beggars belief that the DA's office agreed to commute Frost's life without parole sentence just days after her conviction, purely because The Flash put in a good word for her and her response to being broken out of prison was to start capturing the escaped meta-criminals, given the pressure Kramer was putting them under and her apparent grip on the CCPD. (This also raises the question of why Barry didn't testify on her behalf along with Joe at her trial.)

Trite as it is and as many times as he's given similar speeches, Jesse L. Martin nails his speech on the difficulties of being a parent.

You can see where most of the season's special effects budget went, with the various lighting and storm effects in this episode.

Central City's population is said to be 3 million. This is roughly the same as the greater St. Louis, Missouri area, which is about 2.8 million.

Barry gives Iris a transmat orb full of hyper-tachyon particles that will pull any organic matter in the immediate vicinity to Central City.

The storm created by the Forces generates Category 3 winds and over 22 lighting strikes a minute.

Chester rebuilds the isotopic sensor, enabling Barry to use it while sweeping through the city at super-speed. It is accurate to within 100 yards.

Cisco says an Einstein-Maxwell gravitational trap could hold the Speed Force, but the coils would need enough current to power Las Vegas to do it.

The Speed Force can be detected by the presence of kinetic isotopes in the atmosphere.

The lightning that struck Cecile is revealed to be made of electrochemical isotopes - the energy of the Sage Force.

A collider reaction over Central City threatens to achieve enough atomic mass to trigger a second Big Bang, as the four Forces return to their original state, like when they were born. To save reality, Barry must keep the Force Event from reaching optimal expansion, preventing the Forces from snapping back and destroying all existence.

Every thrice damned speech about The Forces being family and needing to come together.

It is revealed that Iris, Bashir and Alexa's deaths at the end of 710 were the result of Bashir reflexively creating an illusion - something he didn't know he could do with the Sage Force.

Iris thinks Nora attacked her because she sees her as competition for Barry's affections. (This is not exactly news since Nora tried to kill her in 709 and said as much.)

Joe and Cecile see a news broadcast on a mass escape from Iron Heights after lighting took out a wall. Most of the escapees are metahumans. There is no word on the news about Frost being one of the escapees.

Cecile is stuck by lightning. Joe takes her to STAR Labs for treatment.

The Speed Force confronts Barry and demands it bring the other Forces to her so she can kill them. She threatens to destroy Central City if he doesn't do this.

The Speed Force was able to sense Barry going someplace she could not follow.

Cisco fixes the isotopic sensor so Barry can look for Deon Owens.

Frost did escape prison, but decided to recapture the fugitive metahumans. She's in full costume when she goes after Chillblaine, who just stole some biotech interfaces.

Caitlin treats Cecile and Joe says he is going to stay with her.

Bashir talks to Alexa telepathically and convinces her to work with him to steal the transport sphere from Iris, saying they need to confront the Speed Force and kill her before she kills them.

Barry finds Deon at Central City Stadium. Deon apologizes for killing Iris, Bashir and Alexa, but Barry tells him that he was faked out.

Deon wants to kill the Speed Force and teleports away after Barry says they're going to find another way to stop her.

Barry tells Cisco and Chester to man the coms while he keeps searching for Deon. He also says to get  Team Citizen on the street to start evacuating people to storm shelters.

Joe suggests that maybe killing the Speed Force is the only way.

Allegra asks Joe to come help her with the evacuation. She also tells Joe that he's a good man even if he isn't a cop anymore and that he helped her fulfill her dreams of becoming a reporter.

Joe declines her offer, saying he needs to be there for his wife.

Bashir and Alexa overpower Iris and take the orb, transporting them all back to reality.

Barry has no luck finding Deon and meets the Speed Force again.

The Speed Force claims that she isn't responsible for the storms destroying Central City - it's the other Forces. She points out that the Earthquakes are generated by the Strength Force and those are also a part of the storm.

Iris returns to STAR Labs having wound up halfway across town.

Joe tells Barry and Iris that they are good parents and are doing the right thing in trying to wrangle the forces.

Barry says maybe they need to bring the Forces together rather than keeping them apart.

Deon meets with Alexa and Bashir and they agree to work together to kill the Speed Force.

Barry meets wit the Speed Force, who knows he was plotting against her.

Barry, Bashir, Alexa and Deon are drawn into the Speed Force and an all-out fight breaks out.

Everyone is forced out of the Speed Force because of a collider reaction forming over Central City.

Chester estimates they only have three minutes before the isotopic forces return to their original state, triggering a second Big Bang.

The other Forces unite against the Speed Force to give her a vision of her worst fear - which turns out to be being alone. This caused the Speed Force to join with them all, as they help Barry to calm the storm and prevent disaster.

The Four forces join together inside the Speed Force subspace that looks like Barry and Iris's childhood home, which has now been restored to a pristine state.

Barry says he feels more powerful now that all the Forces are working together in harmony.

Cecile wakes from her coma and is expected to recover fully.

Baby Jenna was being watched over by Rob and David Singh.

Allega says she wants to refine her powers to be more than a human glowstick.

Kamilla and Cisco indulge in a public display of affection while getting coffee with Allegra and Chester. This causes Allegra and Chester to look at each other for a moment and look away quickly. This is apparently meant to hit that the two are starting to develop feelings for one another, despite having barely interacted.

Chester built an electric sock warmer for his grandmother.

Cisco gets a text, which he ignores. It is from Chip Cooper, saying that he needs an answer.

Frost shows up at Caitlin's apartment, claiming she was given probation on her life sentence after the DA's office saw her on the news catching the escaping metahuman criminals and after Barry put in a good word for her as The Flash.

Frost tells Caitlin about her crush on Chillblaine.

Barry and Iris decide to start trying to have kids.

Frost falls hard for Chillblaine, despite his repeated attempts to kill her and frame her for his crimes, because women love bad boys. I guess. Hopefully this is building to her making a statement about how she doesn't need a boyfriend because it sort of stinks to see this sort of thing after Danielle Panabaker put her foot down about Caitlin getting a new love interest every season, despite being a recent widow.

Joe West spends the entire episode sitting with his wife instead of trying to lead people to safety (like the rest of Team Flash) purely so he can be there to give Barry and Iris a speech about what it is to be a parent.

Without a doubt the worst episode in the series' history. Lazy writing buoyed by strong performances it doesn't deserve. The only good thing is that can be said about this episode is that it ended the Forces storyline. Unfortunately, that may just be temporary as there's still  another eight episodes to go and no clear plotline for what comes next.
Posted by Starman at 11:40 AM