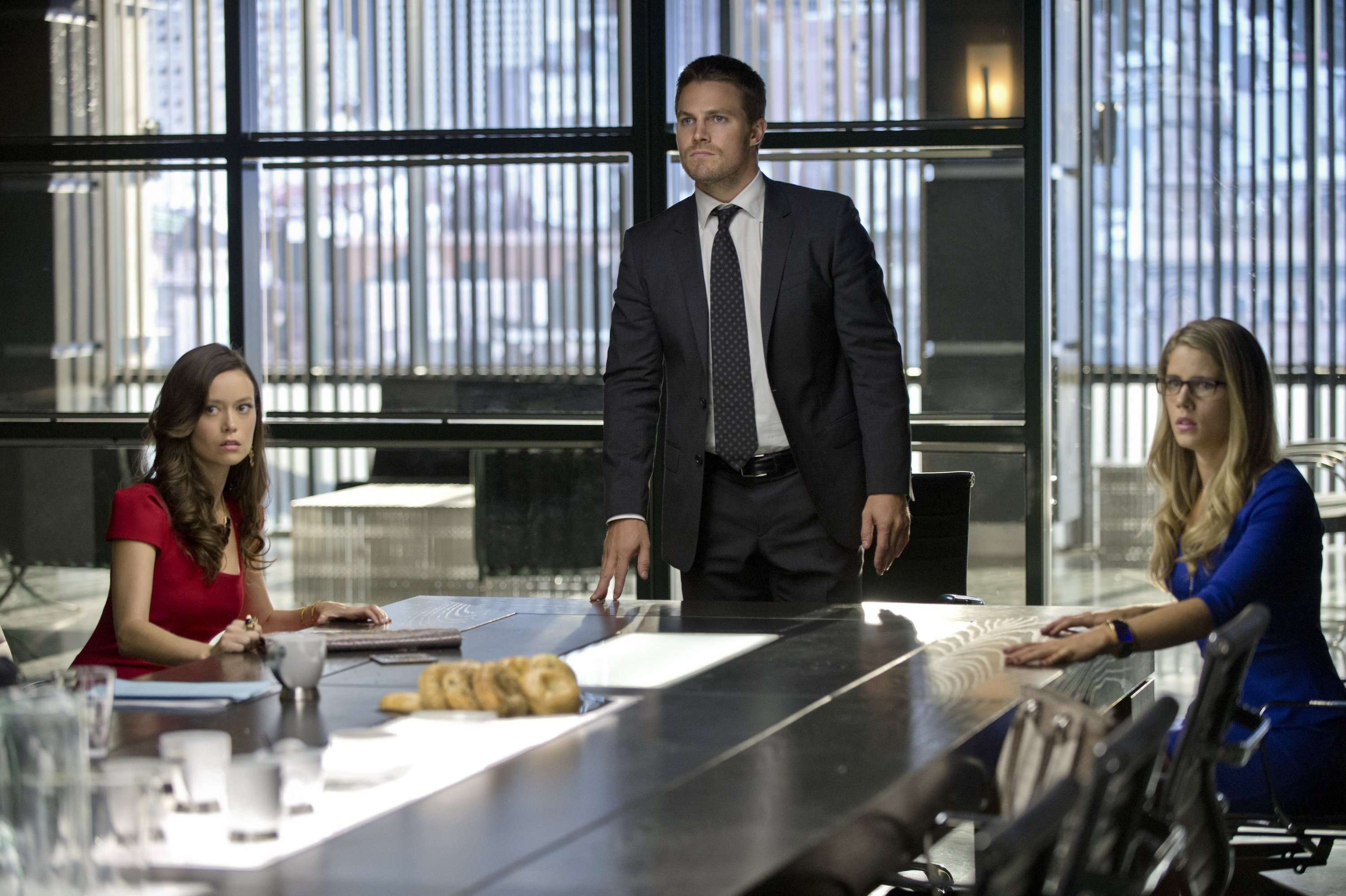 It's five months after the collapse of The Glades and Oliver Queen has returned to Lian Yu - the Chinese island called Purgatory.  Reluctantly dragged back to civilization by bodyguard John Diggle and computer expert Felicity Smoak, Oliver discovers that Starling City is in even worse shape than when he left.

A violent new gang, dubbed The Hoods, has taken to robbing the rich and powerful in the name of vengeance for The Glades.  Queen Consolidated is threatened by Isabel Rochev - a vicious corporate raider out to loot what little value the Queen family name still holds.  And Laurel Lance, now working for the Starling City District Attorney's office, is working with a charismatic alderman - Sebastian Blood - to bring The Hood to justice.  The city is in need of a hero and Oliver Queen will have to find a new way to save it.

But Oliver is not alone in his efforts to save the city, though he doesn't know it.  Roy Harper - his sister's boyfriend - has taken to the streets of The Glades at night, trying to help people in The Hood's absence.  That is, on the nights when he isn't working at Ollie's old club Verdant - now run by Thea Queen.  And then there's the mysterious masked blonde woman in black...

On Lian Yu, five years earlier, Oliver, Slade Wilson and Shado have found the means to survive after their battle with Eddie Fyers and his men.  But their peaceful life is disrupted after a new band of soldiers arrive on the island and Oliver discoverers how fleeting peace can be.

Ollie has a remarkably easy time getting into the crime scene following the Mayor's death at the hands of The Hoods.  I can understand Quentin Lance being able to get through, even if his old boss isn't happy about having an ex-detective who was actively helping a vigilante around (Lance probably has some friends on the force) but how the heck does Ollie get through the police barricades?

Granting Ollie's plan to throw the police off his trail back in Season One was effective, surely someone is going to find it suspicious that Oliver Queen returns to Starling City just before The Hood appears again?

Granting that Felicity is awesome, how did she rebuild The Arrowcave underneath Verdant without Thea noticing if Thea has been running the club for the past five months?  I know the basement had a security keypad but it seems unlikely Thea wouldn't have checked out all the storage rooms after taking over.

Honestly, the ensemble cast is still in fine form.  I could write for pages about them all, so I shall limit myself to the MVP of the episode.

Willa Holland gives the best performance we've seen yet and steals the show in an episode full of strong performances.  The final episode of Season One really didn't give Thea much time to deal with her mother's actions.  This episode more than makes up for it, as Thea refuses to visit Moira Queen in prison because it's the only way Thea can think of to hurt her as much as Moira hurt her through her actions.  Thea's reasoning is cool but believable as is her about-face at the end of the episode.


Artistry
The action sequence in the boardroom with The Hoods attacking Ollie is very well shot.

One nice little touch in the script, to show how things have changed between Quentin and Ollie - Quentin calls him Oliver instead of "Queen".  Paul Blackthorne and Stephen Amell play this bit perfectly.

In the original comics, Isabela Rochev was a Green Arrow villain known as The Queen.  A former slave in a Siberian diamond mind, she was pretty despite her harsh life and won the affections of Robert Queen - Oliver's father, while he was visiting the mine while inspecting his overseas holdings.  Though there's no evidence that he saw her as anything other than another pretty face, Isabela was inspired by the example of the capitalist captain of industry and determined that she would become a ruler and user of others.  She eventually rose to buy a controlling interest in Queen Enterprises and set about turning Robert's company toward her own devious ends.

There is no evidence yet that the Arrow version of Isabela Rochev had an affair with Robert Queen, though Moira Queen clearly knows of the woman and Moira did claim that Robert had cheated on her in the past during Season One.  Perhaps there's more to come...

Stellmoor International - the company Isabel Rochev works for - is also the name of the company that bought out Queen Industries in the New 52 Green Arrow comic by Jeff Lemire.

Alderman Sebastian Blood is a reference to Brother Blood - a classic Teen Titans villain.  High priest of a dangerous cult of demon worshipers, Sebasitan Blood preyed upon the outcasts and desperate in society to build his power base.  The original Brother Blood possessed a supernatural power to feed off the faith of his followers.  Thus far, the Arrow version of Sebastian Blood does seem to be building a power base among the people of The Glades but has yet to showcase any superpowers.

Bethany Snow is a television news reporter for Channel 5 news in Starling City.  In the original Teen Titans comics, Bethany Snow was a news reporter and a member of Brother Blood's cult who used her position to deliver slanted news against the Teen Titans once their battles with Brother Blood became public.  Currently, she's the head news anchor for Channel 52, an in-universe back up feature found in the pages of DC Comics, used to inform readers about important news affecting all the titles that week.

Bethany Snow's news report makes mention of STAR Labs in Central City nearing completion on a particle accelerator.  STAR Labs (Scientific and Technological Advanced Research) is a fictional research facility that has appeared in multiple DC Comics, usually as allies of various superheroes.  For instance, Doctor Emil Hamilton, an ally of Superman, worked for the STAR Labs branch in Metropolis.  Central City is the hometown of The Flash.  Could this mention of a particle accelerator possibly be foreshadowing of how Barry Allen gets super-speed powers in the Arrow reality?

(Regarding The Hoods)
Diggle: Maybe this town still needs a vigilante.
Ollie: Now it has four of them!  (sarcastically) How's that working?!

Roy: You already lost your dad.  Your mom - she's still here and I'm sure she'd love to see you.
Thea: I'm sure she's dying to.  Just like a lot of mothers in The Glades, who won't ever get to see their kids again.  Because my mother helped kill them.  I'm not going to that prison.  It's the only way I know how to hurt her.
Roy: You might want to consider how much it's hurting you.

(In Verdant, after being told of Thea's kidnapping by Roy and Quentin)
Oliver: I'm just going to check something downstairs.
(Oliver heads toward the secret entrance to the Arrowcave)

(Regarding Ollie's refusal to kill following Tommy's death but needing to rescue Thea from The Hoods)
Felicity: Maybe there's another way.
Ollie: (speaking in his Hood voice) They took my sister.  What other way is there?

(Quentin Lance returns to his squad car after a traffic stop, finding The Hoods handcuffed to a fence)
The Hood: Do you know who they are?
Quentin Lance: I think the hoods give me a pretty good idea.
The Hood: Bring them in.
Quentin Lance: Where have you been?!  Typically when I bring in guys that you've gone after, they're a little more dead!
The Hood: ... I'm trying another way.

When Diggle and Felicity arrive on Lian Yu, we see the Deathstroke mask from the Pilot.

When Thea is distracted while he is talking to her, Roy asks if she dropped a Vertigo.

Quentin Lance has been demoted from Detective to Officer.

Roy Harper knows how to handle a semi-automatic rifle.

Roy has nothing nice to say about his parents but he still misses them.  He implies that they are both dead, saying that if he could talk to them, he would, in spite of whathappened.

Walter Steel has resigned as CEO of Queen Consolidated but taken up a new position with Starling National Bank.  He still considers Oliver Queen family, whatever may have happened between himself and Moira.

In the flashback sequences, we find out that five months have passed since our heroes defeated Eddie Fyers and his mercenaries.

Shado is a good hunter and has been teaching Ollie Chinese in private.

The soldiers who capture Shadow ask her "where are the graves?"  Neither she nor Slade have any idea what that might mean.

Averted with Laurel, who kicks some serious butt in a gown when The Hoods attack a gala for The Mayor.


The Bottom LineArrow is back and as good as we remember!  This episode hits all the right marks, no archery pun intended.  A solid start for the season to build on.