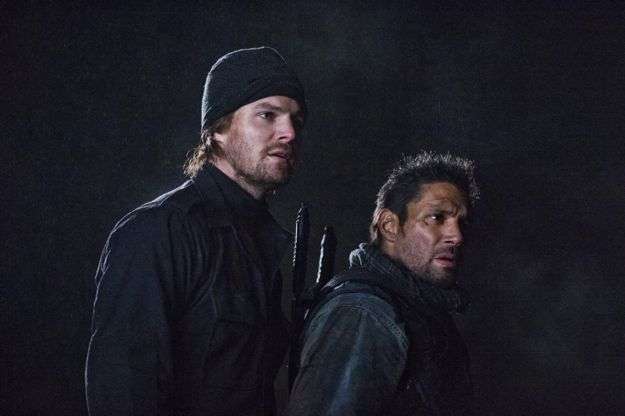 Starling City has a new vigilante - a master hacker called The Savior, who is kidnapping prominent criminals that prey on the people of The Glades and executing them on-line.  Normally Ollie wouldn't lose much sleep over the death of a slum lord but The Savior's antics deny the guilty any chance of redemption or restitution.  And then things become personal when Thea Queen's new boyfriend Roy Harper becomes The Savior's next target...

Quentin and Dinah Lance have reconciled, seemingly reunited by the search for proof of their younger daughter Sara's survival.  Laurel would be happy if she weren't convinced that her whole family was giving in to false hope.  And then Laurel's own investigation brings up evidence that Sara Lance might be alive...

Tasked with tracking down the assassin who tried to kill Malcolm Merlyn, Moira Queen is between a rock and a hard place.  The good news is that Merlyn still has no idea that she was the one who hired the assassin.  The bad news is that a recently arrested Triad boss is ready to finger the people who hired Deadshot in exchange for a reduced sentence.  Just how far will Moira go to protect her family?

On the island, Slade and Ollie try to bargain with Eddie Fyers - a boat for the circuit boards for the missile launcher.  Fyers agrees to a meeting but immediately proposes a counter offer - the circuit boards for the life of Yao Fei's daughter.  In the fight that follows, Yao Fei is wounded but he orders everyone to go on without him, including his daughter Shado.  The team finds later that Fyers has recovered the microchips but Shado knows what Fyers is up to.

Green Arrow: The Midas Touch (a villain who broadcasts his killings on-line), Green Arrow: Year One (the island sequences), Mike Grell's Green Arrow (the underground sequences are reminiscent of several of Ollie's adventures in the Seattle underground), the Batman: Arkham City game (again, the sequences in the subway and how Ollie goes about fighting The Savior), Macbeth (Moira Queen's reaction to the blood on her hands in the epilogue) and the general theme of salvation and rescues.

The employee profile Felicity pulls for Joseph Falk from the Starling City Department of Transpiration website seems to be written more as a prompt for the actor's lines than as a legitimate employee profile unless someone at the SCDOT is making note of which of their ex-employees are going "off the grid" after the murder of their wife.

Felicity says she's never seen somebody die before.  Assuming the comics are happening in chronological order relative to the TV series, she's completely forgotten the events of the comic Arrow #24, where she got a front-row seat to a man falling to his death. (Maybe that story does take place after this episode?)

Colton Hayes really comes into his own in this episode.  His interaction with Willa Holland comes off quite well and the two actors have real chemistry.  What really sells his performance, however, is the little touches that subtly reveal the real character of Roy Harper - like how even drugged and knocked down, he's still trying to protect Thea first.  For all the good it does him with an unloaded gun - the same gun he promised her he'd keep unloaded.  There's also some great non-verbal acting in the final confrontation between The Hood and The Savior - a moment of revelation for both The Savior and Roy Harper as the former realizes he's been killed by the man he thought would be his ally and the later realizes that The Hood chose to save him rather than the man who was emulating him.

The entire ensemble gels together and - as usual - it's the duet scenes that really sell this show.  Ollie and Diggle discussing Ollie's lack of a life over burgers.  Felicity unloading on Ollie about her own loneliness.  Thea and Laurel discussing their problems with going after bad boys.  Thea and Roy, of course.

The cinematography and choreography in the final subway sequence are both brilliant.

There's a bit of irony in Roy's comment that he uses a gun because he's no good with knives.  In the comics, Roy Harper was a master of  Moo Gi Gong - a martial art that emphasizes the ability to use multiple weapons and improvise ordinary objects into combat equipment.


One of the subway stops mentioned by Diggle is Locksley and Adams.  Locksley is one of the more common surnames for Robin Hood in the various legends of that famous outlaw.  Adams is a reference to artist Neal Adams, who redesigned Green Arrow's costume to more closely resemble Robin Hood in 1970.

At the end of the episode, Dinah Lance flies to Central City.  She says she should be home "in a flash."  In DC Comics, Central City is home to the super-speedster superhero The Flash.

(Regarding The Savior kidnapping their target for the night)
Felicity: You went over there to be all "Grrrr! Stop being bad or I'll arrow you!" and now you want to rescue him?
Ollie: I don't like the idea that somebody dangerous is out there.
*Felicity just looks at Ollie*
Ollie: Somebody else.  Cause typically, they don't show my level of restraint.

Ollie: Hungrier than I thought.
* Diggle just looks at Ollie*
Ollie: Are you waiting for me to finish before giving me the lecture?
Diggle: Oliver, you've been spending a lot of time under that hood the last couple of weeks.
Ollie: Keeps my ears warm.
Diggle: And you made this decision to ah... avoid entanglements-
Ollie: - for their protection.  The people who get close to me get hurt.  What's the problem?  You think I'm losing my grip?
Diggle: No.  Just the opposite, really.  You seem calm.  Scary calm.  I get that things didn't go well with Helena... with McKenna-
Ollie.  - With Laurel?! ... with Sara?  The list goes on.
Diggle: Yeah.  But what do you do?  You hood up.  You go home.  You repeat.  That's not much of a life.
Ollie: But the life that I'm living for myself right now doesn't leave much room... for an actual life.  And I don't need one.
Diggle: Wow.  That's a pretty bleak future you plan on spending with no one.
Ollie: I'm used to isolation.
Diggle: And that is exactly what worries me.  You've been home for eight months, Oliver, but I don't think you've left that island in your head yet.

Roy: I was waiting for this.
Thea: Waiting for what?
Roy: The whole 'you can change, I can see the real you' speech.  Look around, Thea!  This his Home Sweet Home for me.  You either starve or you do things that mean you're lucky enough to make it to 21.
Thea: I.. I can't accept that,
Roy: No.  You can't accept me.

The Hood: Let.  The Kid.  Go!  You kill this kid, he'll never get an opportunity to change!  You can give him a second chance!
The Savior: We're the only ones who can save this city!  We can't stop now!
The Hood: We're not the same!
The Savior:  You've killed people for this city.  So have I.  What's the difference between you and me?  Emma never got a second chance... you have no idea how lonely it is.
The Hood: Joseph!  Joseph?!  I understand being alone.  But it doesn't give you the right to kill people in cold blood.

The whole scene between Ollie and Laurel that ends with Ollie saying "I don't want to be an island anymore."

Thea: Why do you have a gun?
Roy: Because I'm no good with knives.

(As Ollie goes off to track down The Savior)
Diggle: Aren't you going to hood up?
Ollie: It's the middle of the day!

Dinah Lance's breakdown near the end is pure Narm.

Ollie refers to his disastrous run of recent relationships with McKenna Hall and Helena Bertinelli (117).  At the episode's end, Roy has one of The Hood's arrowheads.  The Symbol in The Book With The List, first seen in 102, is revealed to be a map of the decommissioned subway line running underneath The Glades.

Averted with Shado, who is the first to start fighting while Ollie is frozen-up during the fight sequence in the island flashback.

Ollie attempts to storm Savior's hideout in broad daylight without a costume or any attempt at disguising his identity.  Granting that he is wearing a motorcycle helmet on the ride over, that comes off once he's at Savior's base.  I'm pretty sure Ollie was riding his personal motorcycle too.  He then goes parkouring across several city blocks in broad daylight.  What's particularly vexing is that Diggle asks him if he'll "hood up" but Ollie dismisses him, saying that it's the middle of the day.  Well, yeah.  But that hood still covers most of your face, even if you do depend on the shadows to look even creepier.

This episode has many fine moments but ultimately collapses under the weight of the subplots.  There's just too much going on!  Between Ollie chasing The Savior, Thea and Roy's romance, everything with Laurel's family and the multiple conflicts there, everything with the noose tightening around Moira's neck and the multiple conflicts there, there's hardly any room for the island flashbacks, Felicity's crisis of faith, Oliver's increasing loneliness and the sudden revelation of just what The Symbol on The Book with The List means.  Everything seems to be rushed and fighting for storytime, which makes the final outcome of Laurel's arc with her mom seem somewhat pointless given that they never get any time together alone until it's time to say goodbye.  A waste of the great Alex Kingston on a shaggy-dog story.