It's no secret to anyone who has been reading my Arrow Episode Guide that I dislike the character of Felicity Smoak.  It's all due to the way the character (or lack thereof) is written.  Felicity is a variant on the one-note, delightfully-quirky stock character that film critic Nathan Rabin dubbed the Manic Pixie Dream Girl.  There's several variants of this - like the Manic Pixie Prostitute (see Pretty Woman) and Felicity's particular variant, The Manic Pixie Geek Girl.

Whatever the variant, their purpose in any story is roughly the same - to act in delightfully unconventional ways while helping the male protagonists in whatever they're doing.  Never mind what their own dreams and aspirations are or what personality traits they might have besides "charmingly awkward" or "cute if she'd take those glasses off".  They have no reason for existing beyond inspiring the hero to change his life (if they're a love interest) or helping the hero in their goals.

I'm here to appeal to the geeks who are still pissed we haven't seen a boxing glove arrow yet!

That's what annoys me about Felicity in a nutshell.  She's supposed to be this brilliant character but she's nothing more than a walking plot device, who is only as smart as the script requires her to be this week.  Felicity has no background or personal drive - she's just there to answer whatever questions the plot requires this week.  Noted science-fiction writer Arthur C. Clarke once said "Any sufficiently advanced technology is indistinguishable from magic."  That's quickly becoming the case on Arrow, where that cute blonde with the glasses in the IT department of Queen Consolidated has become a scientific super-genius capable of not only rebuilding a bullet-riddled hard drive but also analyzing a drug and determining what part of town it was made in due to the water content.  Because....she has glasses and is good with computers?

Arrow #20 is a good example of everything I dislike about Felicity and what her presence does to the show.  But the hackery in this story goes far beyond even Felicity's existence as a one-note plot device.  Indeed, this comic transcends hackery to become something sublimely amusing. 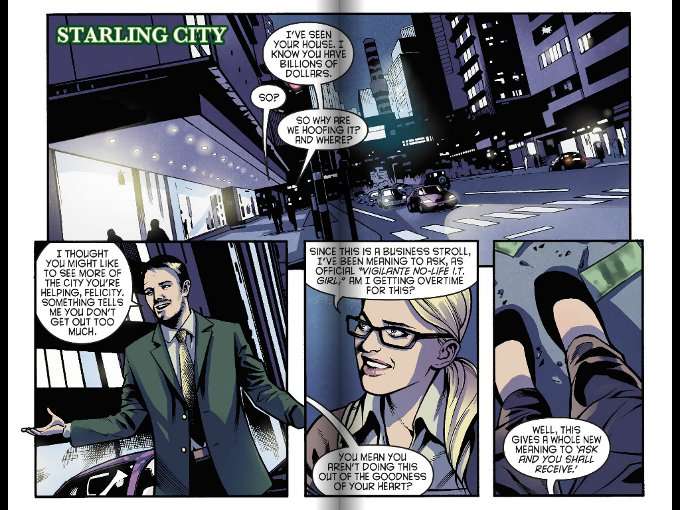 We open a Starling City street, where Oliver Queen is taking Felicity Smoak out to "see the city you're helping".  Why?  Well, Ollie figures she's the type that doesn't get out much.  Because she's a girl who wears glasses and is good with computers!  Yeah... I love Ollie as a character but there are times when he can be kind of a privileged dick in spite of his good intentions.  This is one of them.

So, at this point fans of the show are probably wondering three things...

1. Didn't Felicity say last week that she had no interest in helping Ollie with the vigilante stuff?

2. Wouldn't a famous playboy and local celebrity like Oliver Queen going out with some lowly IT girl attract a lot of the attention that Ollie's been trying to avoid?

Well, there's all perfectly logical reasons for all of that.  You see - LOOK AT THE KITTIES!

So before this can turn into She's All That and Ollie can spirit Felicity away for a full makeover, dress shopping and a trip to get her contact lenses, the two of them notice that it is raining money.  Literally.  Greenbacks are raining from the sky and the good people of Starling City are going crazy.  Thankfully, all it takes is one trip back to the Arrow Cave for Felicity to get on-line and figure out what's going on.  How?  Well, she's good with computers!  And she has glasses! 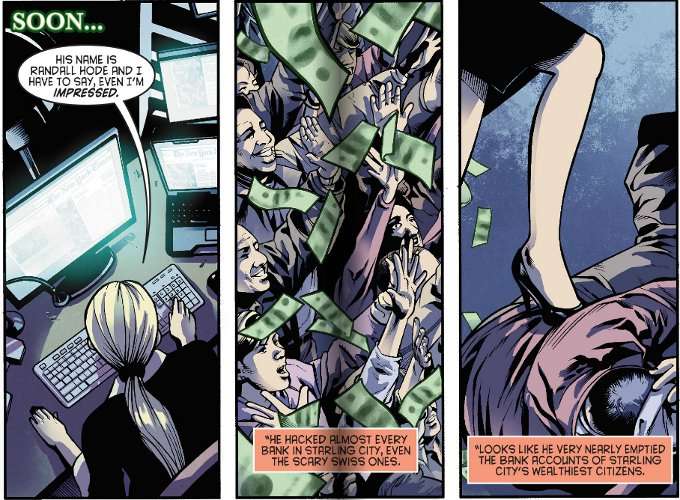 Somehow, she figures out that the man responsible for this is named Randal Hode and that he's...

A) hacked the ultra-secure bank accounts of the wealthiest people in Starling City.
B) converted their collective savings into $100 bills and loaded them into a plane
C) taken the plane in the air and begun making like Robin Hood.

Now, I'm sure that another three questions have come to your minds...

1) Don't banks have all sorts of physical and electronic safeguards that prevent large quantities of cash from being withdrawn all at once?

2) Wouldn't it have taken a lot longer for one guy to load billions of dollars in cash onto a plane than the timeline of this story allows?

Well, there's a very good reason why this isn't stupid or impossible.  You see - LOOK AT THE KITTIES! 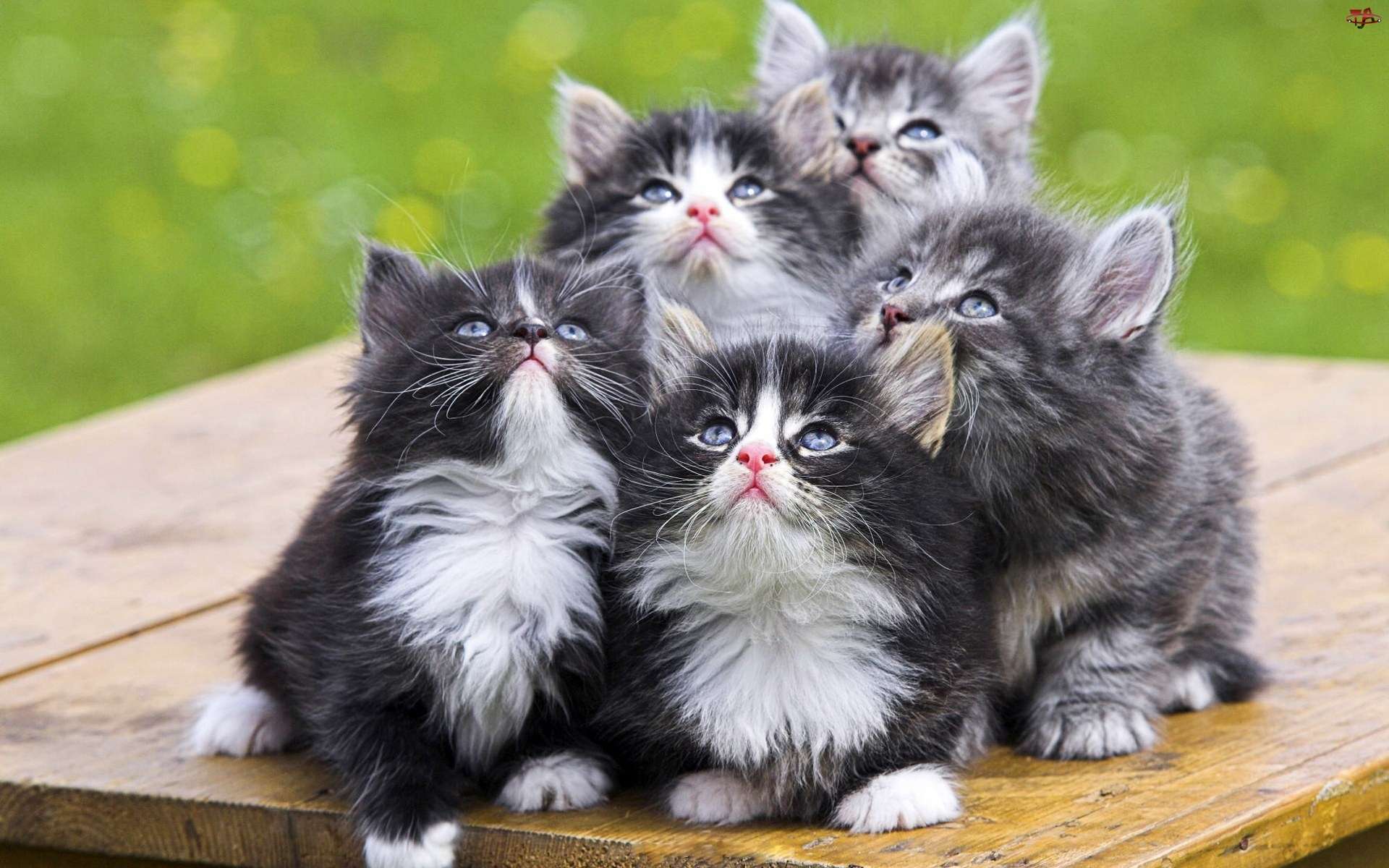 Now, normally Ollie could get behind the rich jerks who are apparently running Starling City into the ground getting their just deserts.  But  Hode's plan is causing mass hysteria, with old ladies attacking defenseless, fit young men roaming the streets.  I'm not even joking or making a gratuitous Monty Python reference - THIS ACTUALLY HAPPENS! 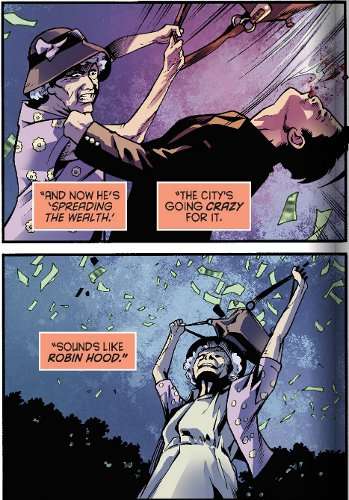 Sadly, this is not Madame Fatal.


Thankfully, getting onto a moving plane flying at 10,000 feet is a simple matter when you're a master archer with a Zip-Line Arrow.  Soon, Ollie is on-board Hode's plane.  Naturally, Hode is less than thrilled and opens up the bay doors of the plane completely, in an effort to flush Ollie out. 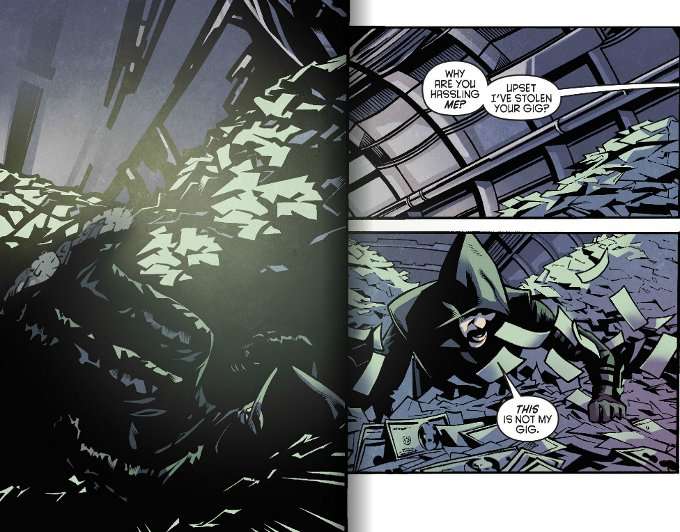 Thankfully, Ollie has a mini-crossbow tucked into his sleeve and enough cable tied to the bolt to create a last-minute lifeline to stop him from plummeting to certain doom.  It's at this point that Felicity, who is back out in the street amongst the rioting civilians, calls to ramble at him in her uniquely endearing way about the local architecture.  Specifically, Hanover Tower. 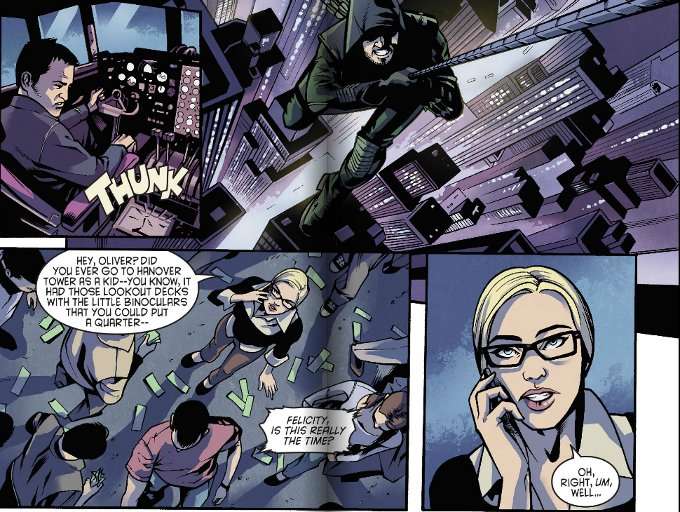 Can you guess why Felicity felt the need to call Ollie with this information right now?

1) She's leading into a tearful confession about how she loves Ollie, she has always loved Ollie and she doesn't care how impractical it is - she WILL wear the fishnets for him.

2) She just got a side-job with the Starling City Tourism Bureau and is being paid to call people and tell them about the finer points of the city skyline.

3) He's about to run into said building.

I don't know what's dumber.  The fact that Felicity felt she had to call Ollie about this when he's hanging on for dear life or the fact that Ollie actually DID fail to notice the rather large skyscraper bearing down on him.

Thankfully, Ollie's not so far down that he can't double-time climb up his cable, just barely missing the building.  He's further able to climb onto the plane and - somehow - moves around to the front to jump down on the front of the plane.  Now, I don't know planes but I do know from the view that we got of the front of it earlier that this particular plane has a rounded nose.  So I'll be darned if I can figure out how Ollie has enough space to kneel there,  even ignoring the fact that he's 10,000 feet up and traveling at a great enough speed for the plane to remain airborn!

Does the phrase "bug meet windshield" mean anything to you? 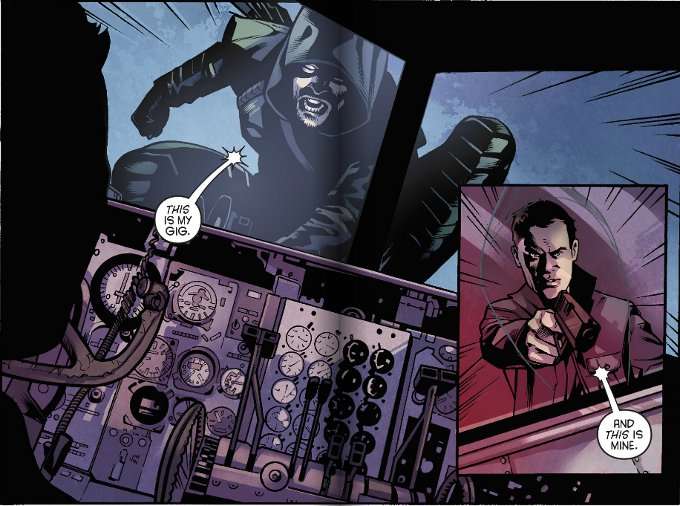 But that's okay!  I can go with this!  We'll just assume that the plane does have enough space for Ollie to kneel down and that he's got some kind of magnetic grips on his adventuring boots.  That still doesn't explain how Ollie is able to drive an arrow into the side of a plane with one hand and use that as a pivot to kick his way through an airplane window. 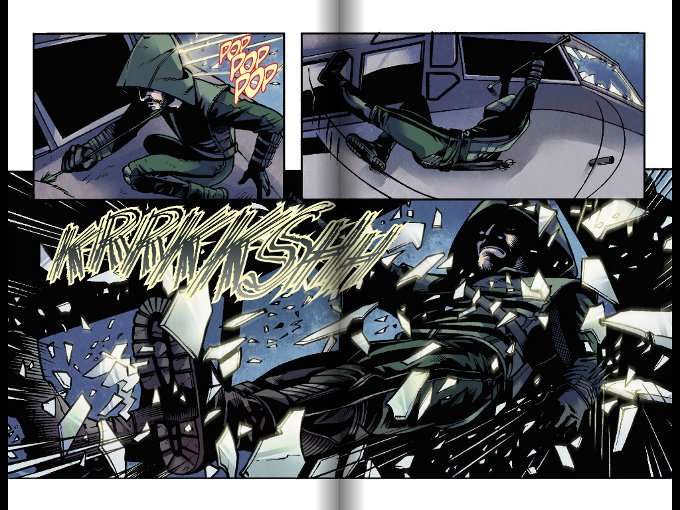 Do I even need to begin to explain what's wrong with all of that?

Ollie pins Hode down, as Hode says he was directly inspired by Ollie and how he wanted to do something about the greedy people who are ruining the city.  But Ollie apparently has given up on the recruiting drive (given his track record with intentionally recruiting help in his war on corruption, who can blame him?) and despite the advantages a man who can hack every bank in Starling City has to offer, Hode isn't nearly as easy on the eyes as Helena Bertinelli was.  So Ollie skips past the "You can reform" speech he gave Huntress and Firefly and moves right on to threats of violence and death. 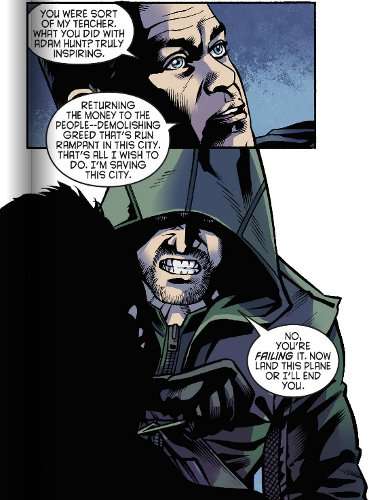 Ollie renders Hode unconscious which Felicity - newly relocated to a rooftop somewhere - points out is kind of stupid since Ollie has no idea how to fly a plane.  Well, Ollie says he used to watch his dad fly a plane all the time and has picked up enough to know how to glide it.  Felicity and her Windows 8 tablet come to the rescue as she's instantly able to hack in and take a look at the plane's controls. 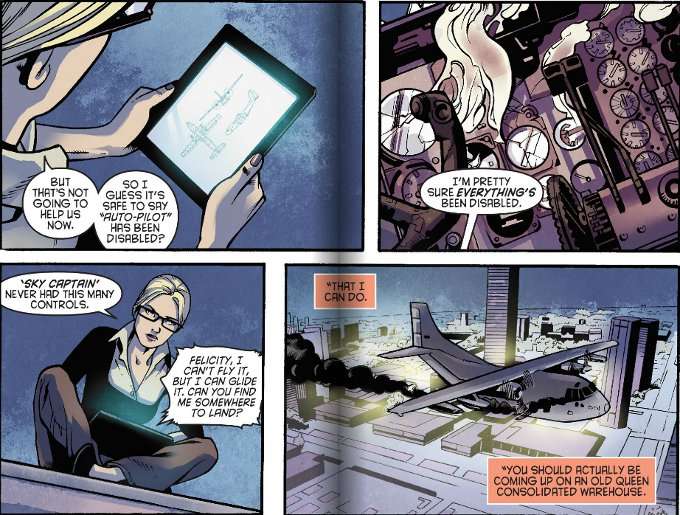 This is why the FAA makes you turn your electronic devices off on the plane.
They're afraid you'll find out ANYONE can do this.

In what marks the one realistic, logical thing in this comic, Felicity quickly figures out that flying a plane in real life is much more complicated than running a flight simulator on the Wii and that all of the SCIENCE! in the world won't allow her to pilot the plane with what little she knows.  Thankfully, she is able to play navigator for Ollie and finds an abandoned Queen Industries warehouse for him to glide the plane into safely.  And so our comic ends with our heroes back at the Arrow Cave and Felicity justifying her own cash-grab in the streets. 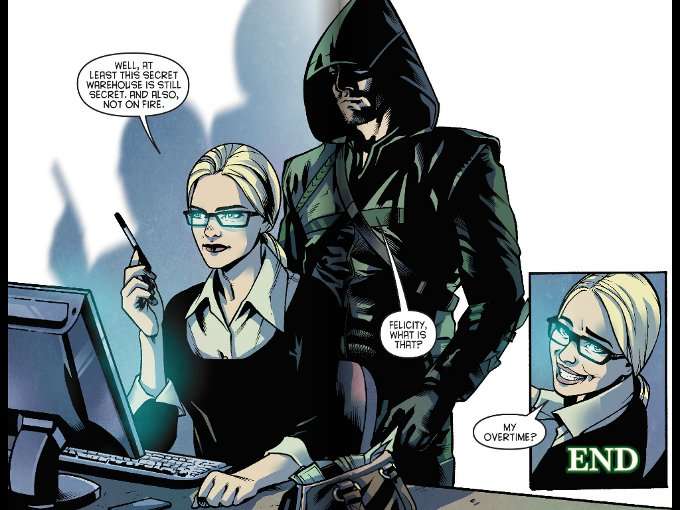 Seconds later, Ollie said "You have failed this city," and shot her.  She was not missed.  The End.

This comic stinks!  The artwork isn't bad, save that Ollie only seems to have a mustache in some panels instead of his beard but the story is full of continuity problems and just plain stupidity.  Normally Arrow is worth the download but this week it's not even worth downloading to laugh at.
Posted by Starman at 3:44 PM