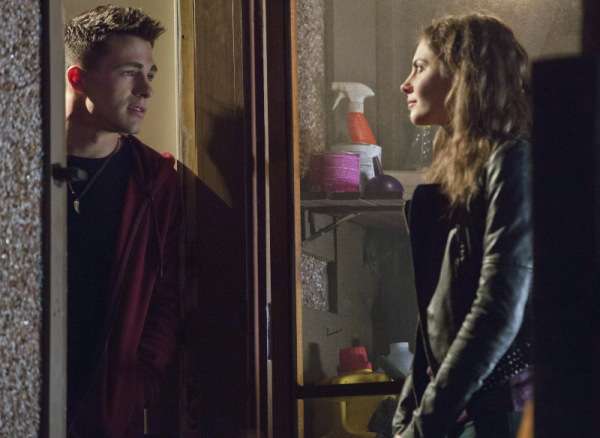 The Dodger - A British jewel thief with a penchant for turning other people into his accomplices with explosive collars - comes to Starling City, presenting Ollie and Digg with a chance to prove to an increasingly resistant Felicity Smoak that they are doing more to help the city than just working against the people on Ollie's list.  At the same time, the two decide, after some prompting from Felicity, that it's time to bring some romance into their lives - Diggle by asking out his brother's widow and Ollie by asking out his former fling, Detective McKenna Hall.

At the same time, Laurel's lesson to Thea about how the other half live is cut short after Thea's purse is snatched.  Thankfully, Thea is no mean detective and eventually tracks down the crook in question - a young man named Roy Harper.  And in the shadows, Moira Queen attempts to win her family free of Malcolm Merlyn's "undertaking", eventually calling a meeting with China White to discuss an assassination.

On the island, Slade's wounded arm becomes infected, sending Ollie on a search for the miracle herbs that Yao Fei used to heal him.  A chance encounter with a bound and bleeding exchange student (or someone claiming to be that) will leave Ollie searching his soul as he considers his options in helping the stranger or saving Slade.

Green Arrow: Year One (the island sequences), Green Arrow/Black Canary (the character of Dodger), the New 52 Green Arrow title (Roy Harper with a criminal background) and Oliver Twist (the original concept of The Artful Dodger).

I don't consider this a goof because I honestly believe Felicity IS that stupid but given how fearful she is about... everything in the earlier part of the episode, it seems wildly out of character for her to try and confront Dodger on her own without Ollie or Diggle.

Most of the supporting cast is firing on all cylinders here, which is amazing considering how little we get of our mainstays.  Quentin Lance and Laurel Lance appear briefly, but don't get to say much.  David Ramsey gets some good moments dealing with his new love interest.  It's been a few episodes since Willa Holland had much to do but her scene at the end is well-played.  Really, the only off note in the whole episode is Emily Bett Rickards and I'm willing to write that off as the writing more than her performance.

Susanna Thompson doesn't get much screen time as Moira but she nails the Mama Bear attitude with every second she gets.  You honestly believe her encounter with The Hood has shaken her and made her desperate enough for a way out of her situation to look into directly hiring an assassin to take out Malcolm Merlyn.

Colton Haynes makes an intriguing Roy Harper.  We don't know much about Roy's motivations or if he really is as dishonest and hard as he claims to be in the warning Thea that she shouldn't believe every sob story she hears.  All I know is I'd love it if his story about the drug addict mom turned out to be true.  Or perhaps he's stealing to take care of an infant daughter abandoned by her mom?   Or would that be too much to hope for?

Ollie's pursuit of The Dodger on a motorcycle is a well-shot sequence.

The Sherwood Ruby is obviously named for Sherwood Forrest - the most popular home of Robin Hood, in the folklore of that legendary outlaw, whom Oliver Queen is NOT.

The Dodger is loosely based on a DC Comics villain created by Judd Winick in Green Arrow/Black Canary #7.  About the only thing that character has in common with The Dodger we see here is that both of them are British thieves who specialize in high-end merchandise and both use a taser-like weapon.  The Dodger from the comics was a neutral fellow with a Cockney accent whereas the Arrow Dodger is a more high-class fellow.  Curiously, he appears to have lower-class sympathies, as he tries to persuade Ollie to let him go at the end by noting that he only steals from the rich.  The Dodger from the comics - who was more of a mercenary than a thief - also briefly hooked up with Mia "Speedy" Dearden, who dumped him after he cheated on her.

Arrow's version of The Dodger we see here has much more in common with The Artful Dodger from Charles Dickens' story Oliver Twist than Judd Winick's Dodger.  The Artful Dodger was a pickpocket who trained other boys as thieves and then left them to take the rap, similar to how Dodger in Arrow recruits other people to commit his crimes for him.

Roy William Harper, Jr.was the real name of Green Arrow's first sidekick in the original DC Comics.  Adopted by Oliver Queen, Roy was the first teenager to fight crime alongside Green Arrow as Speedy.  His history is far too detailed to go into here (I highly recommend The DC Comics Wiki) but suffice it to say he has a long, rich and very complicated back story.  In the New 52 universe, little has been said about his background save that he has a criminal record.  His full story is meant to be told in the upcoming Green Arrow Annual #1.

Roy wears a red hooded sweatshirt when he snatches Thea's purse.  Most of his costumes have used red as their main color and - like Ollie - he has worn hooded costumes in the past.

While chasing The Dodger, Felicity tells Ollie that he just passed Adams and O'Neil.  These two streets are clearly named for Neal Adams and Dennis O'Neil - the artist and writer responsible for redefining Oliver Queen's costume and personality in the early 1970s in Green Lantern/Green Arrow.

Slade: You're not going to last an hour out there.
Ollie: Well, I guess you'd better hope I get back in 45 minutes, then.

Diggle: What if her next attack of conscience leads her right to the police?
Ollie: No, she won't say anything.  I know it.  I had to make the same calculation when you found out about me.
Diggle: Mmm-hmm.  And what would you have done if you were wrong?  And I decided to make a call to Detective Lance?
Ollie: (beat) I would have put an arrow in you.
Diggle Ha!  (beat)  Oliver?  Really?  You really would have done that?  Really?

(After Felicity suggests bugging McKenna Hall's phone)
Ollie: It's not how I typically get my information.
Felicity: How do you typically do it?
Ollie: I find the person. And then I put the fear of God into them until they talk.  But we can try your way.

Ollie: You're not the only one who knows how to reboot my system.

Ollie makes use of the same healing herbs Yao Fei used to heal him, which we first saw in 103.  Moira Queen has a meeting with triad assassin China White (first seen in 102), to discuss killing Malcolm Merlyn.

Felicity Smoak.  Genius computer hacker.  Scared senseless of becoming accessory to a murder.  Has trouble talking to friendly people.  Suddenly decides to confront a vicious jewel thief known for trying to blow people up and forcing them to wear bomb collars.  Winds up becoming girl hostage because of the one time she is confident in approaching someone and - oh yes - doesn't think of getting the trained security professional or her vigilante boss first!  Also, Felicity - when she isn't doing techie things - is pushing Ollie and Diggle to ask their respective crushes out.  Because while the Manic Pixie Geek girl cannot ever date anyone herself or have any interests outside of her work, she must help her male companions find love!

Averted with Thea, who proved to be a far better detective in this episode than anybody working in the Starling City Police Department.  Come to think of it, given that she figured out something was up with her mom and Malcolm Merlyn (though she was entirely wrong about the details), I think we can safely say Thea IS the best detective on the show.  Sorry, Quentin.

Ollie knocks a man unconscious and steals his motorcycle while wearing one of his best suits after having been highly visible for the better part of an evening at a nearby charity event.  Granting that "A billionaire playboy stole my bike" is unlikely to be taken seriously as a story, it's still not like Ollie (well, not like Ollie lately) to take that kind of chance.  You never know what Detective Lance might overhear and decide to make a big deal out of.

Another one of those Arrow episodes where the subplots for the supporting cast are far more interesting than the main plot.  The writing team takes a mostly forgettable DC Comics villain and - while making him far truer to the literary inspiration than the comics villain ever was - still can't manage to make him more interesting than Ollie and Diggle's dating lives, Thea's confrontation with the man who stole her purse and Moira's starting to plot against Malcolm Merlyn and The Undertaking.