As I noted before in my review of last month's Knights of the Dinner Table, I don't usually write reviews for this book.  And yet, here I am - reviewing it again one month later.  Why?  Did I suddenly have some change of heart regarding this book being inaccessible to non-gamers?  Well, yes and no.

I still think that a large part of the humor of this book - enjoyable as it is to me - would fly over the heads of new readers.  However, in the wake of KODT #195, I think the greater problem is the rich continuity between the characters rather than this book's focus upon a minority within a niche group - comic fans who roleplay.  Truth be told there's very little direct gamer humor in the book now and most of the comedy is born of the conflicting personalities and the interplay between them rather than three idiots thinking a gazebo is some kind of monster.

More than that, KODT now contains enough drama to match the comedy.  A fine example of this comes in one scene between Sara (the book's main female protagonist) and local game shop owner Pete, during a gamer gathering at the local biker bar.  It's been a running gag since the beginning how many of the men in the local gaming community have a crush on Sara - a fact that mystifies her.  Pete suggests to her that it isn't that she's a woman who games - it's the fact that she's a genuinely nice person and that most of the men she knows aren't used to anyone being nice to them. 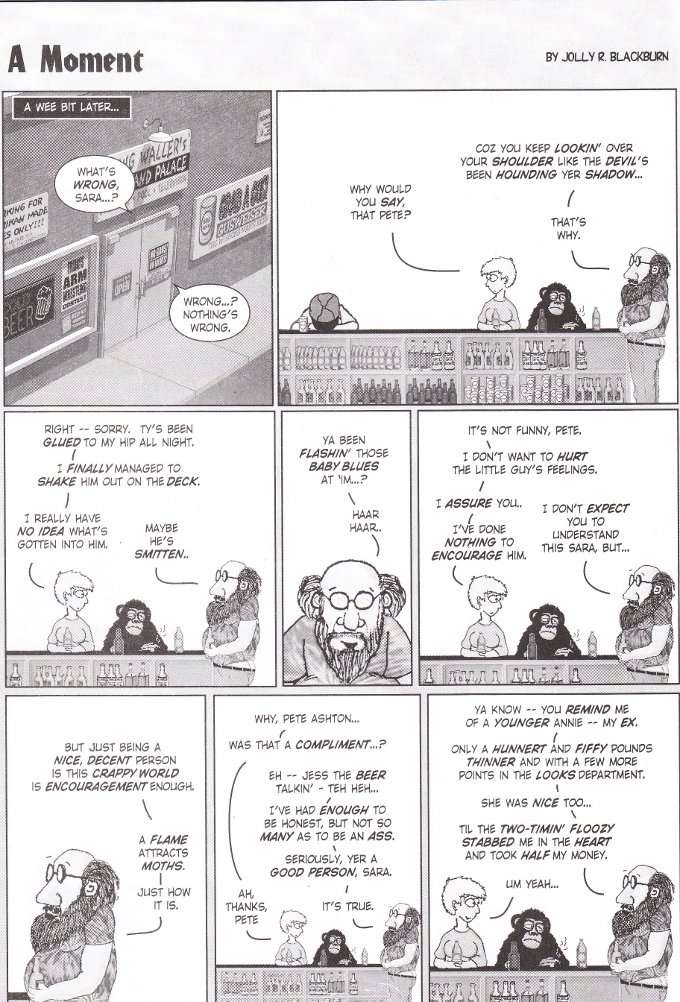 It's a brief moment and it's immediately off-set by the running gag about Pete bad-mouthing his ex when he's drunk but it's still there.  And it's far deeper than one would expect given that Pete is usually portrayed as a miserly skin-flint who would sell his own mother for a deal.  This scene also hit me because I know a few women like Sara who have the same problem with being hit on because of the assumption that "being nice equals "digs me" and not knowing why their being a decent person seems to bring unwanted advances.

This is also shown in the comedic highlight of the issue, where the rest of the titular Knights are indulging in one of the gathering games - creating characters based on some of the people in attendance.  There's a lot of funny stuff in here, mainly stemming from the unwitting misogyny as our boys wind up turning their friends, ex-girlfriends and current love interests into action heroines worthy of a Quentin Tarantino/Robert Rodriguez/Frank Miller film festival.  B.A's reaction to the absurdity of all of this is priceless and the descriptions and ideas are hilarious but a bit of the humor is lost if you don't know all the characters being described, such as Moe and Bridgette. who do not appear in this issue. 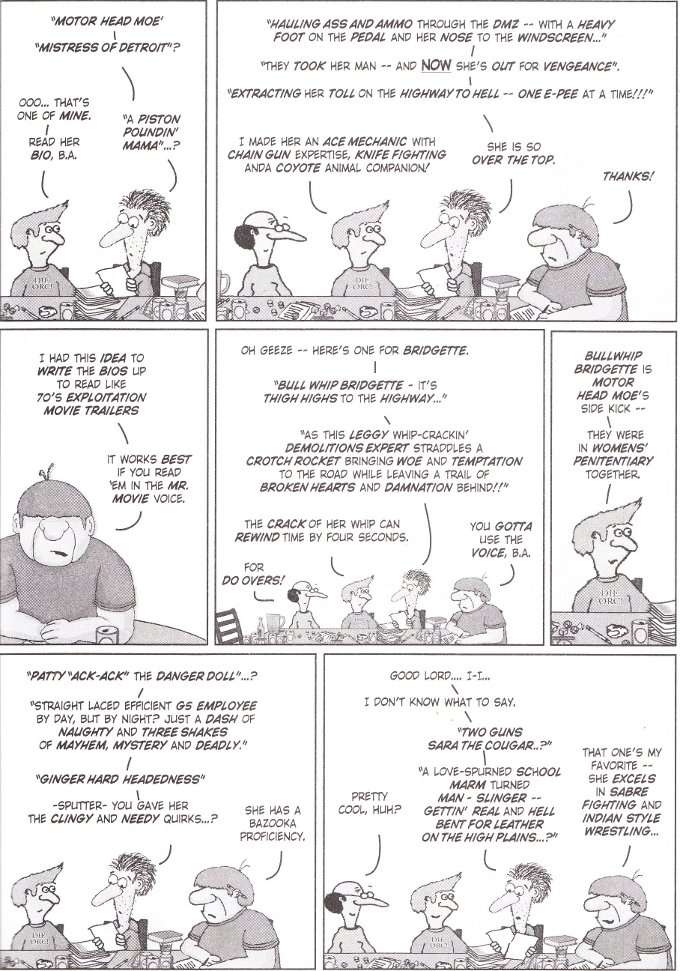 As before, I can't really recommend this comic to neophytes.  I can and do strongly suggest that anyone who thinks they might like this sort of thing check out the collection of freebie strips on Kenzerco's website and then consider in investing in the earlier Bundle of Trouble collections of the earlier issues.
Posted by Starman at 3:59 PM