Arrow #8 tells the story of three teenage boys who travel to Starling City hoping to get video footage of The Hood.  One of their group loudly expresses his disbelief that The Hood exists while another, Pat, has personal reasons for seeking The Hood out personally.  Thankfully, after the boys happen across a mob hit in-progress, the skeptic is quite happy to be proven wrong as the local vigilante shows up and saves them from certain death. 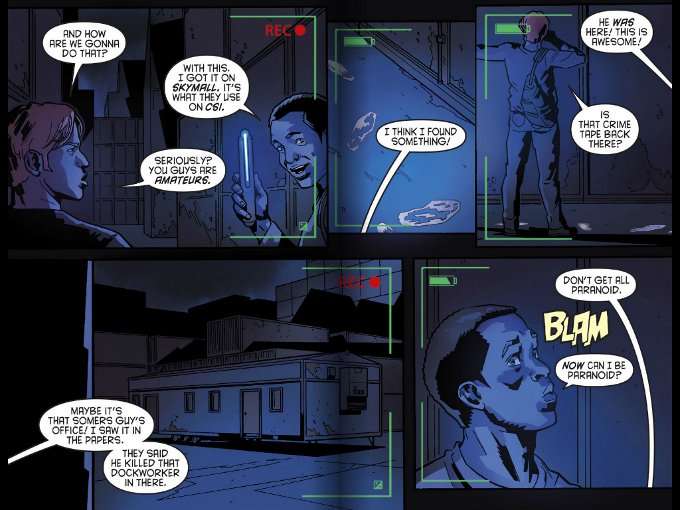 While being full of some great action sequences, the script by Mary Iacono and Wendy Mericle is rather weak.  The problem with stories like this one, where we see our main character through the point of view of another character, lies in establishing a point of reader/viewer sympathy for the spectator character.  It's rather hard to do this when two of our three teenage protagonists aren't given names!  Only Pat - the believer with a brother who The Hood saved - is given any personality beyond The Complainer or The Agent Mulder.

The artwork by Sergio Sandoval and Pol Gas is similarly troubled.  Gas' inks obscure more of the art than they highlight, even in the scenes that are meant to have good lighting.  And as in Arrow #5, Sandoval still has trouble depicting the characters in this book as resembling the characters from the show.  His take on Ollie looks more like Garret from Thief: The Dark Project than Stephen Amell.

A larger problem is that some of the action in this issue is better suited towards a Vertigo title than a comic book based on a TV-14 rated TV show. I'm not squeamish but even I was shocked to see the depiction of an arrow going completely through a human head - something I can see this take on Oliver Queen doing in a fight but not something I'd expect to see illustrated in-detail in a comparably rated comic book.  Between that and the half-hearted characterization, I'm comfortable in saying that only the most devout Arrowheads need pick up this week's comic.