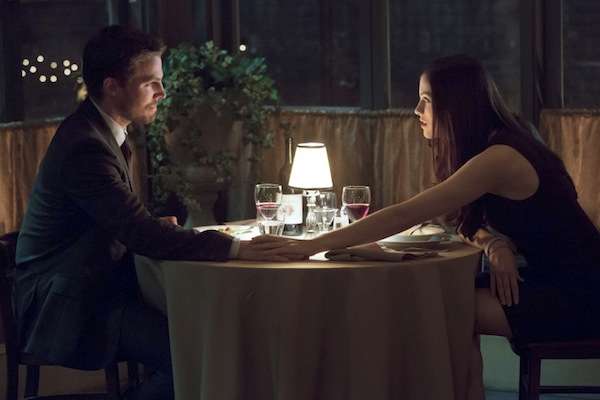 After a shooter on a motorcycle nearly kills Moira Queen while gunning down a local mob stooge, Oliver follows the trail to a mysterious killer who seems to be targeting the associates of The Bertinelli crime family.  Ollie attempts to get in with the mob, but his plans are thwarted when he is passed on to construction kingpin Frank Bertinelli's young daughter, Helena.

What Ollie fears may be a wasted evening proves fruitful for Helena - still grieving a fiance killed by violence - seems to understand the trauma that changed him like nobody else he knows.  But if Helena recognizes that five years on the island has changed Oliver Queen into something besides "the rich man's answer to Lindsay Lohan", what has her trauma changed her into?  Someone who could be a partner for The Hood AND Oliver Queen?

At the same time, Tommy Merlyn continues his pursuit of Laurel Lance though their first date is spoiled by his credit card being rejected and the revelation that his father has cut him off from the family fortune.  The episode ends with a promise of romance between both young couples but Ollie is no closer to being truthful to his family and the Mafia and Triad of Starling City are close to open war.

Henry V (the title is taken from the first line of the play's prologue - "O for a Muse of fire, that would ascend the brightest heaven of invention..." and the play's plot, involving a spoiled prince who grows to maturity as he wages a war, mirrors Oliver's own development), Batman/Huntress: Cry for Blood (Huntress going after members of her own family while pretending to be part of them).

Jessica De Gouw knocks it out of the park on her first at-bat as Helena Bertinelli.  The character is instantly likeable and you can easily see Ollie falling for her because of their common background even as you can see him being horrified by how vicious she is in battle.  A lesser actress might have failed to be convincing as either a vulnerable woman who lives every day in the shadow of her casually evil family or the warrior goddess she becomes in a fight.  De Gouw manages both roles easily.

I can't single out any one actor as being particularly grand this time because, honestly, everyone is firing on all cylinders.  The script offers the entire ensemble cast and several guest starts a chance to shine as we move rapid-fire through the dialogues that make up the majority of the script.  Ollie and Diggle.  Thea and Ollie.  Moira and Thea.  Tommy and Ollie.  Laurel and Tommy.  Ollie and Frank Bertinelli.  Moira and The Well Dressed Man.  Ollie and Helena.  Ollie and Detective Lance.  The whole episode is one big plate-spinning act and it is played beautifully!

The script of this episode has Geoff Johns' fingerprints all over it and this script is Johns at his best.  There are a lot of wonderful, magical little scenes of two characters talking and the constant switching of points of view helps to keep the story moving before we realize how many talking-heads moments there are and how surprisingly little action there is in this episode.

Helena Bertinelli a.k.a. The Huntress is another DC Comics vigilante with an archery theme, though she favors the crossbow.  In the original comics, she was a mobster's daughter who swore revenge on criminals in general and the Mafia in specific after her entire family was killed as part of a hit.  Several stories have depicted her pretending to be a typical Mafia princess in order to gain information to use in her vendetta, as we see here. While she mellowed in recent years, Helena has never been reluctant to use lethal force against the criminals she hunts - something that caused her to butt-heads with Batman and his followers on numerous occasions.  She is also, as depicted here, a skilled motorcycle driver.  Green Arrow and Huntress have never been a romantic item in the comics before, apart from one throw-away line in an issue of Judd Winick's Outsiders which suggested the two had a one-night stand.

(After Diggle expresses his concern that Ollie's head isn't in the game after finding out Helena is the killer)
Ollie: I know what I'm doing.
Diggle: Now I know what your family feels like when you lie to them.

Ollie: Detective.  Is everything ok?
Det. Lance: Your, um - your buddy with the arrows was at Russo's last night.
Ollie: And I was there earlier with a date.  Soooo... what?  You think I'm the Hood guy again?
Det. Lance: ...No.  Your date?  Helena Bertinelli?  If I were you, I'd stay away from her.  Her family is bad news on a good day.
Ollie: Why the sudden concern for my well-being?
Det. Lance: A few weeks ago I made a mistake.  I almost got you killed...
Ollie: ...and you felt like you owed me one?
Det. Lance: If I did, as far as I'm concerned this clears the books.


Helena: When you love someone as much as I loved him... with all of your heart and you.. you can't just turn that emotion off when they're taken from you.  You still feel things as deeply and... if it can't be love that you feel.... then it becomes hate.
Ollie: Hate for who?
Helena: Oliver... you should stay away from me.

The whole final scene between Ollie and Helena, but especially the final lines....

Helena: Why is your vendetta more valid than mine?  We're the same, you and I.
Ollie: No, we're not.
Helena: Hiding in plain sight?  Concealing our anger with smiles and lies?  Don't lie to me, Oliver!  You feel the same as I do.  I know it.
Ollie: Why are you crying?
Helena: I don't know.  Maybe it's because I have been alone in my hate for so long.  And it-
Ollie:  - it feels good to tell the truth.

The bit where we see Helena "unmask" for the first time, immediately after Ollie says "When I find out who this guy is, he's a dead man".  Some things are cliches because they work.  The figure in the motorcycle helmet pulling off their helmet to reveal they are a woman is NOT one of those things.

Dinah's favorite pizza is mushroom and olives (vegetarian?).  Frank Bertinelli refers to the press conference where Ollie disavowed having anything to do with his family's business (Honor Thy Father).  China White (first seen in Honor Thy Father) appears as the Triad representative at a meeting between Frank Bertinelli and The Triad.  Helena's cross was a gift from her fiance.  The Well Dressed Man has plans for Starling City which Moira and Robert Queen were a part of but Robert got cold feet before his death.  Detective Lance warns Ollie about staying away from the Bertinelli family, referring to the events of Damaged.  The Well-Dressed Man played by John Barrowman is revealed to be Mr. Merlyn - Tommy Merlyn's dad, after he cuts Tommy off completely, eliminating all financial support.  Mr. Merlyn is no mean fencer.  Helena's warning to Oliver to stay away from her echos Ollie's words to Laurel in the Pilot.  Helena had planned to go to the FBI with evidence to send her father and his organization to prison and her fiance was blamed for the laptop full of evidence, resulting in his death by her father's order and the murder was carried out by his second in command.  Helena's words before snapping her father's second's neck - "No one can know my secret" - echo Ollie's own words before he snapped the neck of one of his kidnappers in the Pilot.  Walter Steele returns home from his long business trip.  Ollie reveals his secret identity to Helena but she had already figured it out on her own.

The cops describe the shooter as an amateur though very little of Helena's behavior throughout the episode - save the ease in which her identity is exposed - is born out by that statement.  Indeed, she seems a capable hand-to-hand fighter.  Perhaps she's taken self-defense classes (as Laurel Lance did) but is new to using guns?

Damn near perfect on all fronts.  I'd say this would be the episode to show to people who are on the fence about the show but there's too many pay-offs for those who have been watching the show since the beginning.  Jessica De Gouw turns in a remarkable premiere performance and the rest of the regular cast give it 110% percent.  The script is top-notch with nary a dull line and Geoff Johns' influence is obvious and welcome.  Well done, all involved.
Posted by Starman at 12:02 AM