Since this week's episode of Arrow will be introducing The Huntress into the universe of the TV show, I thought perhaps we might take a look at the first meeting of the characters in the comic books.   The bad news is this is not a very good story.  The good news is that it's a bad enough story to be suitable for Off-Target.  So let's dig into Green Arrow #83 - The Weight. 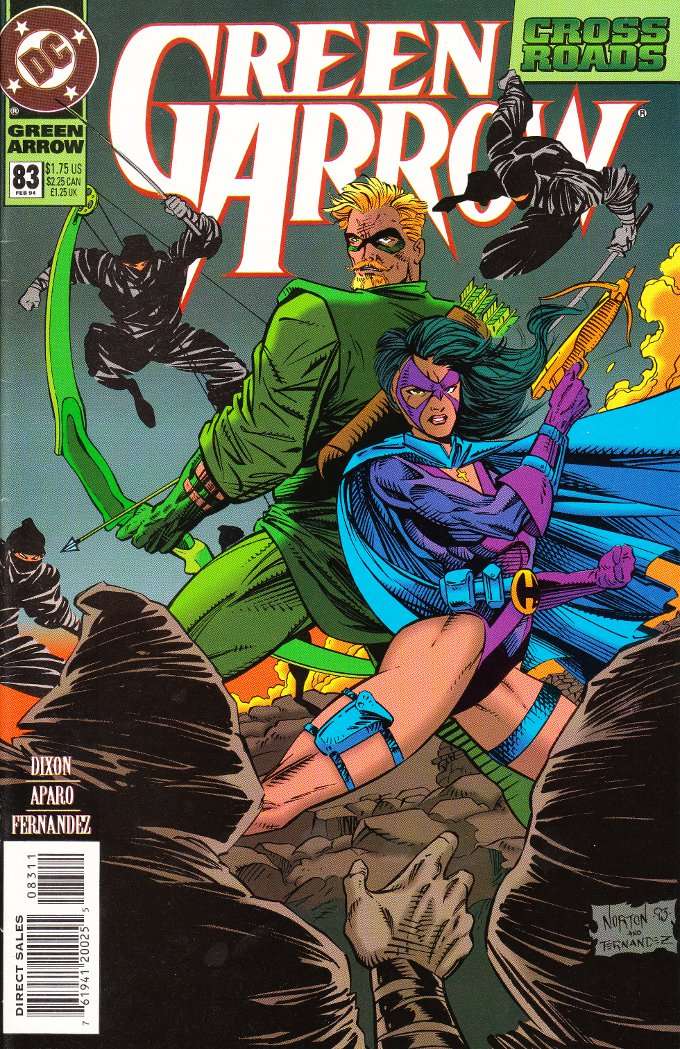 I don't know what's more painful to think about - her leg or his neck!

The cover is an all-around mess.  The posing with their respective bows pointing up and down is just stupid, given there's ninjas moving into melee to fight them.  Ollie's head is almost completely turned around relative to his body so that we can see his face even as his back is turned towards the reader.  And look at Huntress's leg!  Her thigh alone is longer than the rest of her body!  And I'll tell you right now that this scene is nowhere in the comic.

Our story begins with Green Arrow in the Hollywood Hills.  Literally, the hills before the Hollywood sign.  We find out that he came to LA hunting the Yakuza but (if I may briefly sound like a James Bond villain) it seems the hunter has become the hunted.  Luckily the local Yakuza do not live up the high standards that Ollie has come to expect of the ninjas who get sent to kill him on a regular basis. 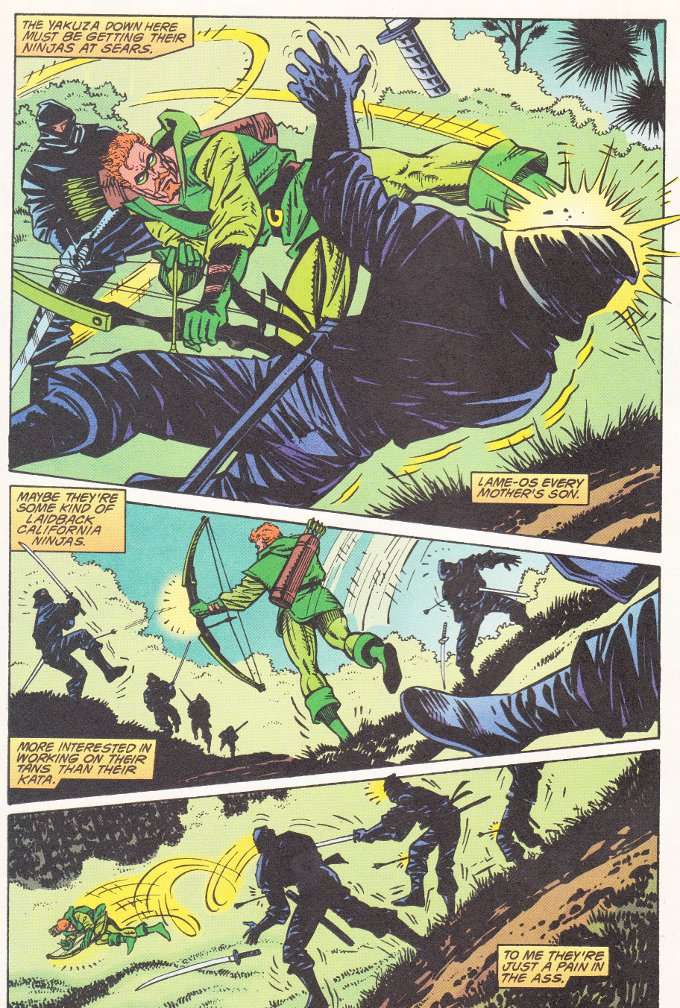 The Hand they're not.  Hell, they aren't even The Foot Clan!
After sending those goons to their lords like Prince Ali, Ollie heads back to his hotel room.  To his surprise, there's a message waiting for him.  The caller is one Sissy Devereaux - a supermodel Ollie had dated during his Rich Bastard days.  Miraculously - given Ollie's rep at the time - the two remained friends and only friends after their break-up.  Figuring they could catch up while he was in town, he called her up to make sure he had the right address before popping in to say hello.

When Ollie gets to Sissy's mansion, the front door is unlocked and nobody answers the doorbell.  Once inside, he finds that the lights are out, the interior is completely trashed and reeks "like someone was sick once and nobody cleaned it up.  Or sick a hundred times."   Indeed, there's flies swarming around several puddles of vomit in the living room.  Ollie is about to leave when he hears a weak voice from the kitchen. 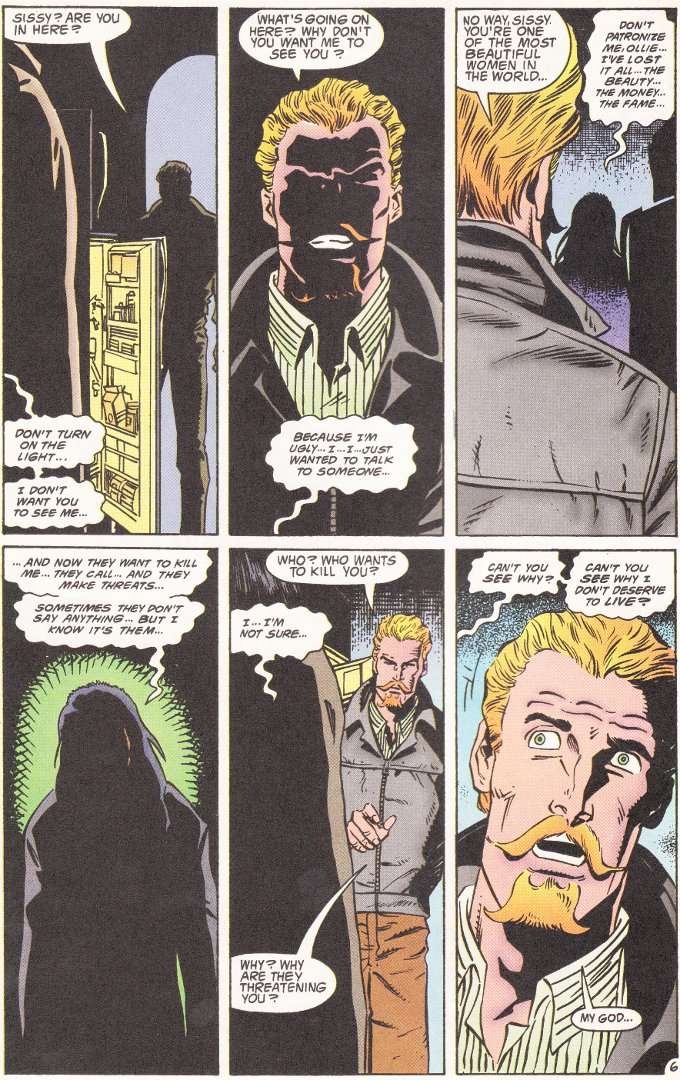 Well, now that's just RUDE, Ollie!  I mean, her looks may have faded a little in the decade since you've seen her, but there's no need to- 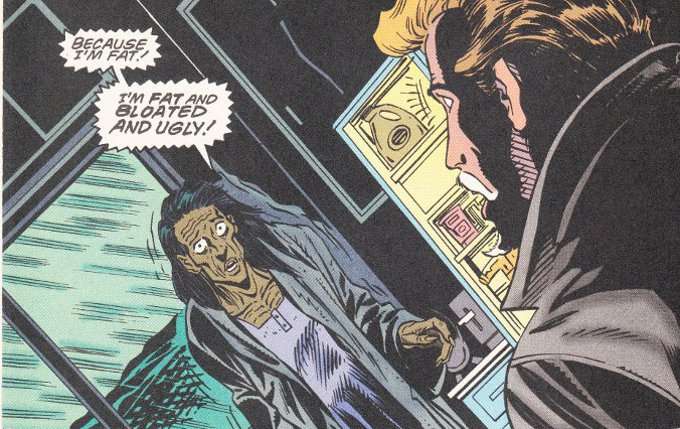 Ahem.  Okay - MAYBE we can forgive Ollie for being startled.

Ollie's no shrink and he's not the detective Batman is but as a hunter he is pretty good at analyzing the signs of a trail and following them to an answer.  Though he doesn't know anorexia from bulimia, it's clear to him that some manner of delusional state or advanced paranoia has driven Sissy to this sorry state.  At least, that's what he figures before he hears the familiar sound of a helicopter at close range and the bullets start flying.

Yes, it's sad that she died. But dying thinking she was ugly? That's even worse!


In the blink of an eye, Ollie has changed into costume and is returning fire at the gunmen.  He just manages to shoot the gun out of one shooter's hands before narrowly avoiding being hit by a red convertible.  Enter our special guest star for this month's issue of Green Arrow - The Huntress! 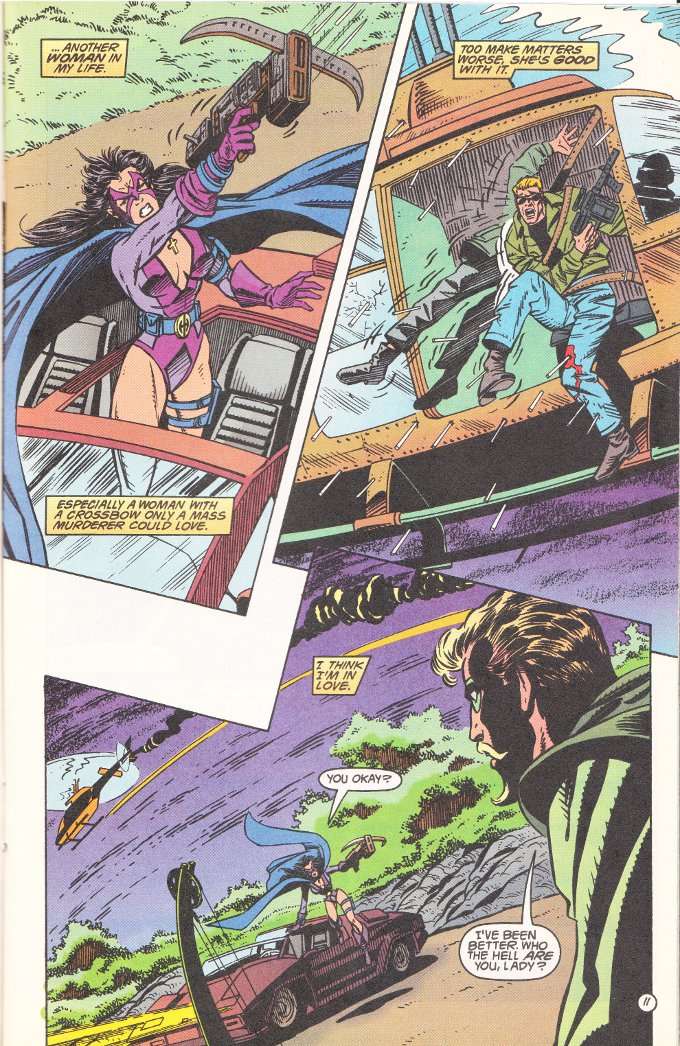 Apparently heavily-armed, sarcastic brunettes in Kevlar leotards are Ollie's type.
We don't get much in the way of background for Huntress in this issue, so let me give you the quick back story for this version of the character.  (Those interested in the full story can check out this article.)  Helena Bertinelli was part of a Mafia family based in Gotham City.  After her entire family was gunned down in front of her, Helena began training in the warrior's art.  Now, primarily focusing upon the gangsters of Gotham City but willing to hunt any criminals who prey on the weak, she delivers justice in a far more lethal and permanent manner than most of the Gotham City vigilantes as The Huntress.
You might well ask what a Gotham vigilante like Huntress is doing in Los Angeles.  It's a fair question and one that Ollie asks after Huntress explains that they can take their time chasing their quarry as she found their base earlier and planted a homing device on their chopper.  Ollie explains that his stake in this is because of an old model friend who had contacted him and it turns out that Huntress got dragged into this mess for the same reason - a phone call from an old school friend who had become a top model and was in fear for her life. 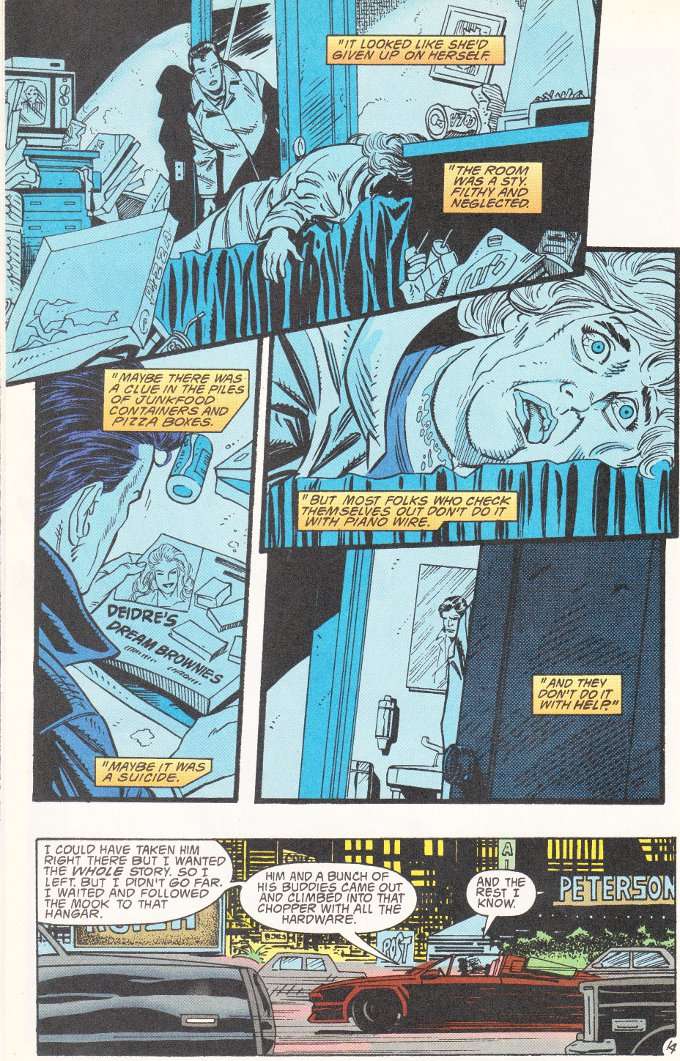 (Paul Harvey Voice) And now you know the rest of the story! Good day!

The two move in on the hangar Huntress determined was the killer's base earlier and find that it's also being used as a storage facility for something.strange and smelly.  Sadly, Ollie's hunter green leathers aren't much good for camouflage in a box factory and he's quickly spotted.  Thankfully, Huntress is quicker on the uptake and the draw. 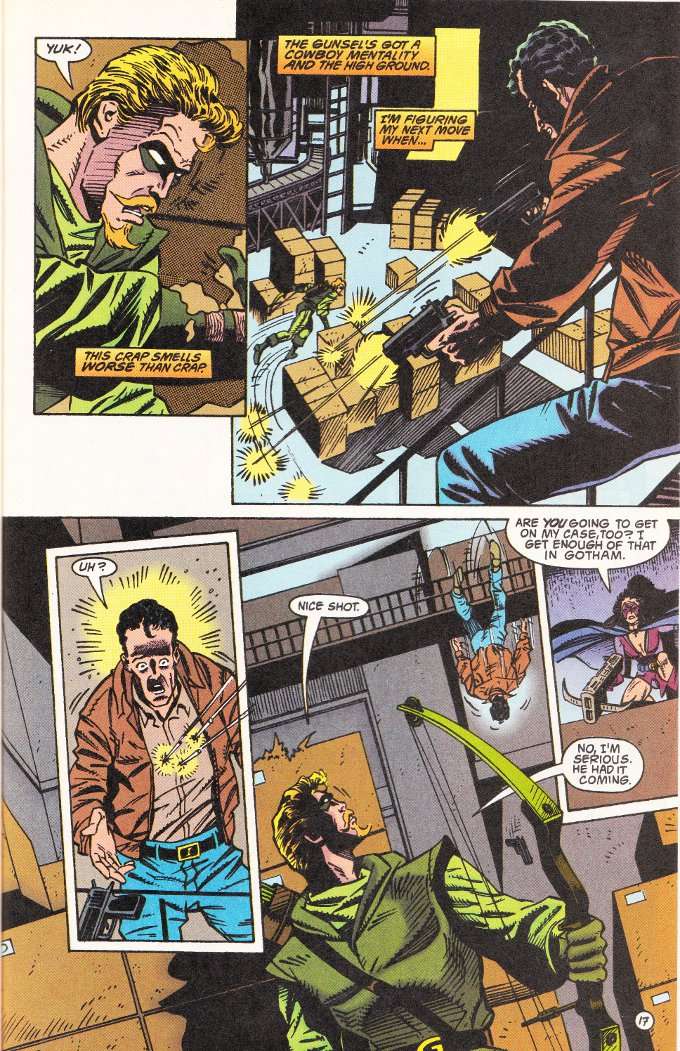 I apologize in advance because I'm going to be harping on this point quite a bit as I review the whole of Cross Roads.  Again, I must point this out.... Oliver Queen doesn't condone killing people unless it's absolutely necessary!  Even the thugs trying to shoot him!

Anyway, a surprisingly effective fight-scene ensues, with Ollie making excellent use of the terrain as the other thugs TRY TO KILL HIM WITH A FORKLIFT!  Ole! 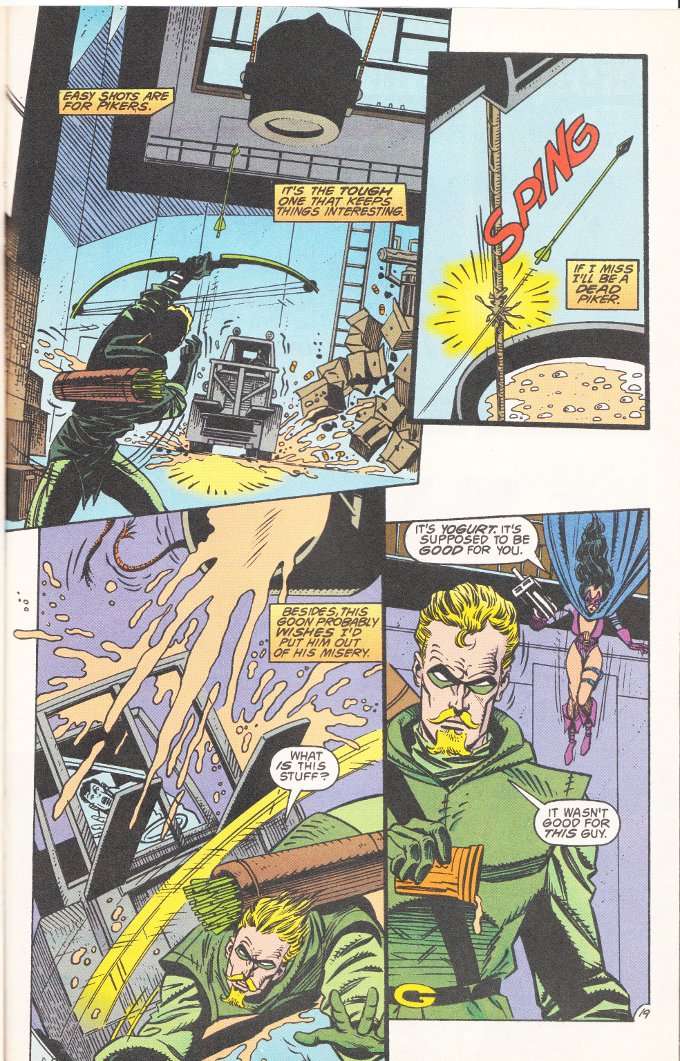 It's at this point that the two heroes notice that all the boxes and cartons in the hangar have the same logo - Diedre Dallas.  They also remember that both Sissy and Huntress' friend (who never DOES get a name in all of this) had lots of cartons for other Diedre Dallas microwave diet meals and snacks scattered around their respective homes.  Lacking any better leads, the two find Diedre Dallas' Bel-Air mansion on a map of celebrity homes and are greeted with gunfire as they approach.  Ollie is able to disable the security with arrows through the shoulder (THAT'S the way you do it!) and the two heroes move in to confront Ms. Dallas herself. 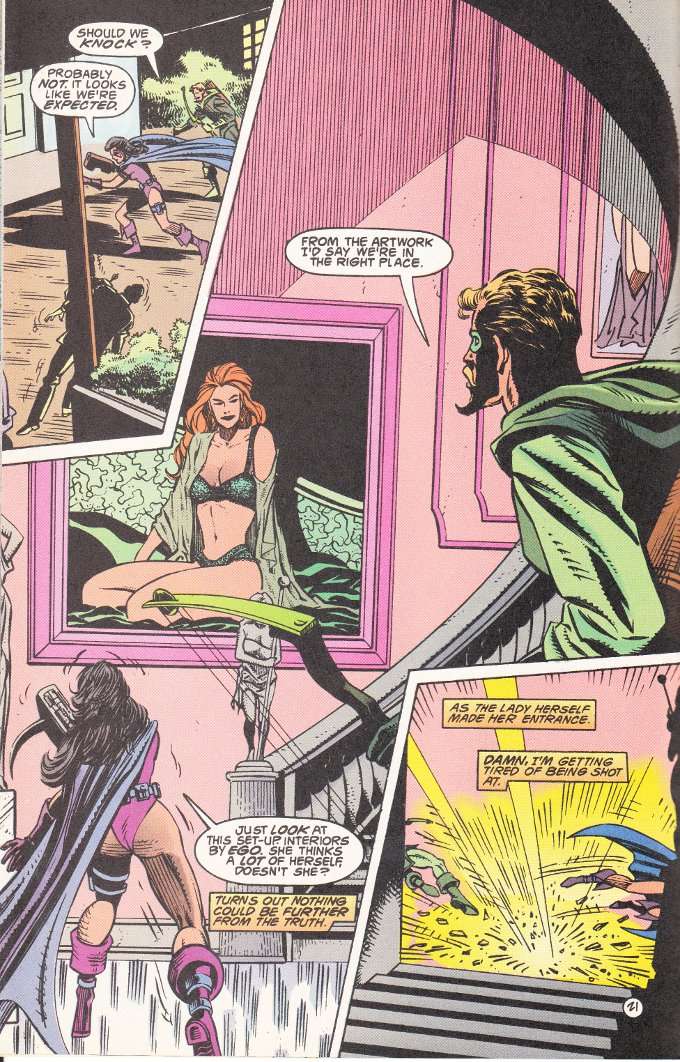 Huntress is looking much cheekier than usual tonight.

A quick note on the art design here.  For all the grief that Jim Lee has received over his 2002 redesign of Huntress' costume, I fail to see how it's worse than what Helena originally started out in. Granting that the belly window was dumb, let's at least credit Jim Lee with getting rid of the thong and the cleavage-revealing top that exposes most of Helena's upper torso.

Anyway, our master criminal is finally revealed!  And here comes the shocking twist! 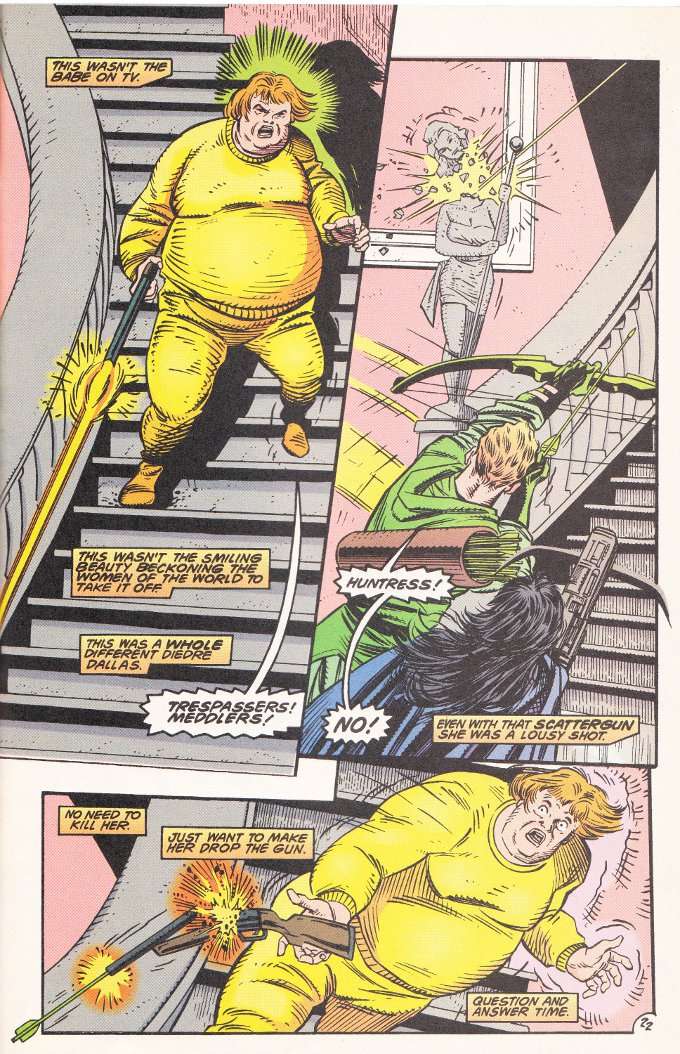 Okay, Diedre Dallas!  Now we're going to learn the truth!  What horrible secret were you killing to hide?  Was your food so lacking in nutrients that all the people eating it and nothing else were slowly starving to death like Sissy?  Was your food so horribly addictive that it was driving people toward morbid obesity like Helena's friend, thus insuring they'd keep buying more and more diet meals to try and lose the weight?   Were your microwave dinners just repackaged Jenny Craig food? 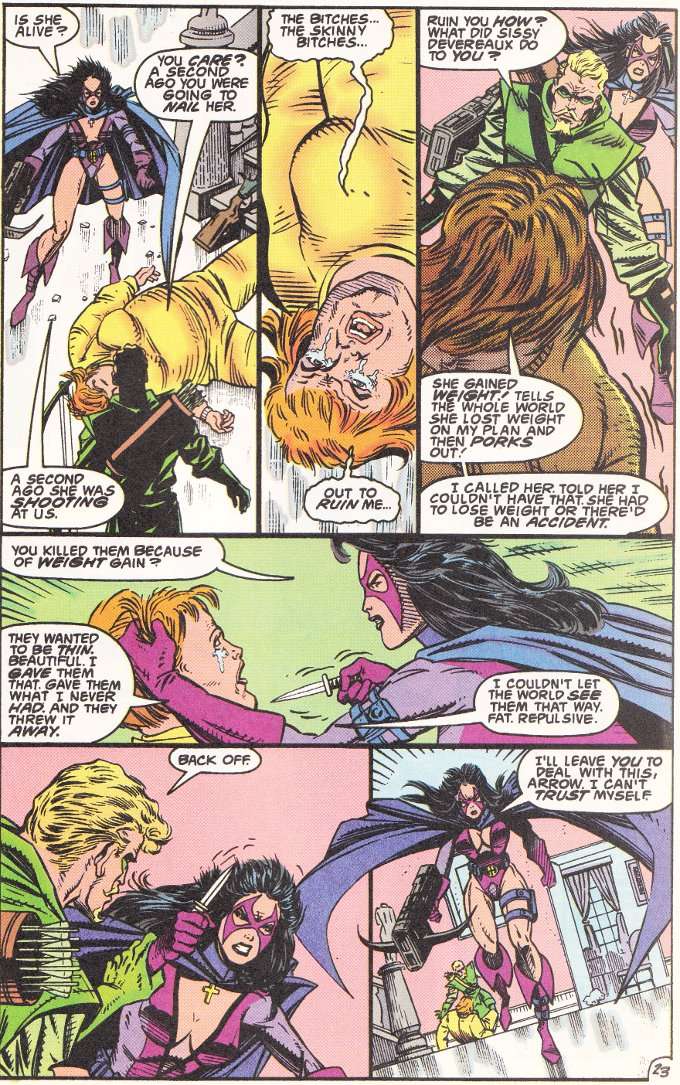 Right.  Because you've shown such restraint and reluctance to kill until this point...

And this is the point where you realize that Diedre Dallas apparently runs her company with the same business savvy that drives Umbrella Corporation  I'm not even kidding.  He entire plan shows bad planning on a truly epic scale.  Particularly considering that nothing was said about Sissy or the other model being official spokespeople for her company!  There's also the problem that when you are trying to avoid bad publicity, it is generally recommended that you avoid murder.  Particularly murders that cannot be written off as anything BUT a homicide - i.e. strangling someone with piano wire or buzzing their home in a helicopter with machine guns a-blazing. 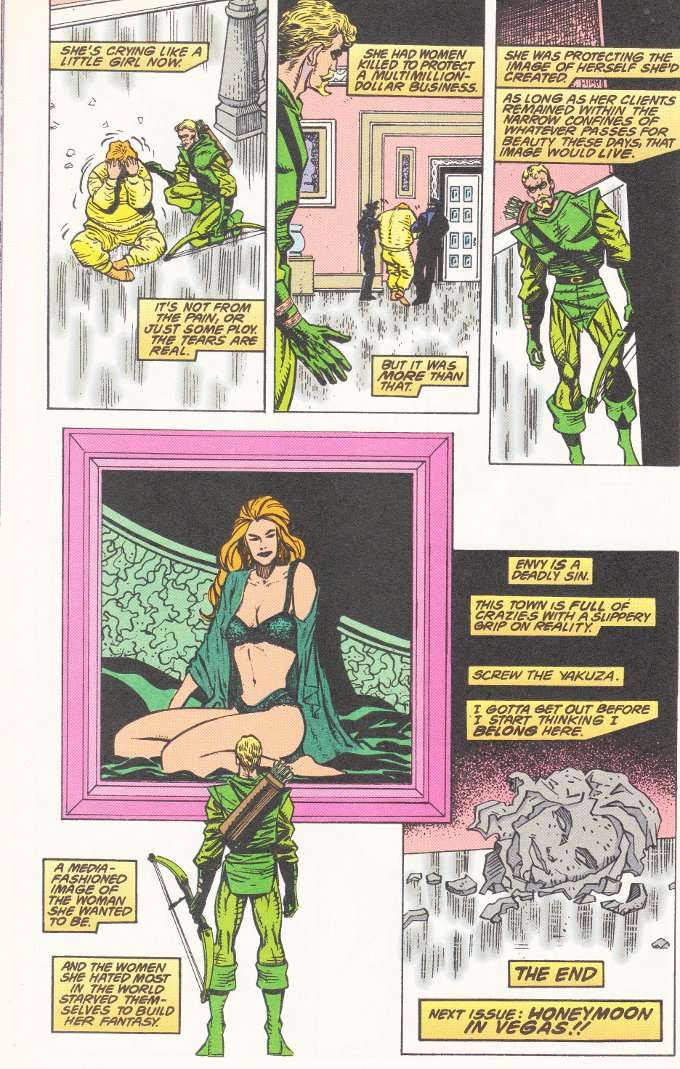 There's no way to justify what Diedre Dallas does here unless you just write her off as completely crazy.  Consider the following....

You are the head of a corporation that specializes in the sale of diet foods.  You find out that a prominent model - who may or may not be a paid spokesperson for your company - has gained weight recently, after making a big deal about eating your products.  How do you handle this potentially sensitive issue?

A)  Do nothing.  Figure that - unless the model claims your food was responsible for their weight gain - most people will just assume they went off their diet and that your products had nothing to do with the weight gain.

B) Talk to the model.  If she's already in your employ, talk about hiring a physical trainer and what you must do to get her back into shape.  If she isn't in your employ, offer to sign them up as a spokesperson if they can lose the weight using your products.

C) Call your lawyers.  If she is a spokesperson for your company, check and see if there are any stipulations regarding her maintaining a certain level of physical fitness in her contract and remind her of those terms.  If she doesn't work for you, file a cease-and-desist notice asking her to refrain from mentioning your company in the future upon threat of a libel suit.

D) Make threatening phone calls to the model, telling her to lose weight or else.  Hire a group of mercenaries and send them off to kill the women who don't get with the program.

If you said D, congratulations.  You have a promising future as a Villain of the Month before sinking into a well-deserved obscurity!  Seriously.  If nothing else, you've got to figure that the first three options - in addition to being legal - are a good deal easier and cheaper than hiring a team of professional killers, even if you do cut costs by letting the hired goons use one of your storage facilities as a base of operations!

There's also the problem that - based on Sissy's appearance - Diedre couldn't have been keeping too close a watch on her if she could go from overweight to emaciated in a matter of months.  And I'm guessing at the time frame, because we get NO indication of just how long this had been going on.

All that being said, this comic isn't all bad.  The action scenes - as per usual for a Chuck Dixon comic - are well-paced and Jim Aparo does a fine job of depicting those sequences.  And while her early-90s costume looks a bit on the ridiculous side, it wasn't that bad by the standards of the day and Huntress herself is presented as a tough, competent heroine who can hold her own alongside Green Arrow.  It's a shame the two didn't get more time to interact as the two heroes play off one another quite well.

Still, this is a bad comic for all of that.  The villain's plan compares unfavorably to those of your average Captain Planet villain, being convoluted and needlessly evil when legal means of protecting her company would have been easier and cheaper.  And while Jim Aparo is usually a fine artist, his design for Sissy looks like something from an EC horror comic of the 1940s rather than a sick woman, leading the reader to wonder at some supernatural explanation for her horrid appearance that never comes.
Posted by Starman at 11:45 PM