First, a correction.  In my review of the last issue of Justice League, I took issue with a part of the new origin for the villain The Cheetah.  Specifically, I took issue with how the comic said that she was empowered after cutting herself on a knife recovered from a tribe in the Amazon Jungle and became possessed by a goddess of the hunt.  I asked why, if she had been empowered by a South American goddess, she had taken the name of an African predatory cat.

What I missed was that the jungle the team journeyed to at the end of the comic was in The Congo - not The Amazon.  Further, this issue does explain how this knife - dubbed The Godslayer - had been used in Africa to bind one hunter goddess/cheetah spirit and made its' way to South America, where it wound up in the possession of the aforementioned Amazon tribe.  My apologies to Geoff Johns for the error.

Now that that's said, on with THIS issue... 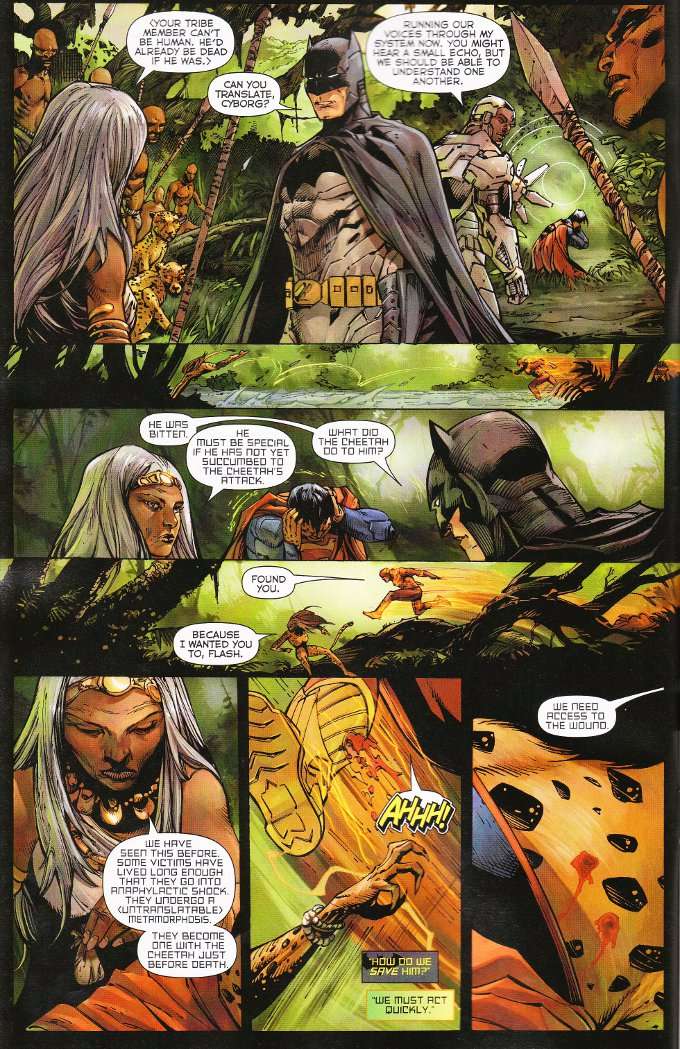 Justice League #14 offers a lot of material I wish we'd seen in this title sooner.  Still, there's no point in crying over what should have been done earlier.  The fact of the matter is that, for the first time in a long time, this book did more right than it did wrong.

The first half of the book focuses upon our team as they have to cope with the dual threat of The Cheetah running loose and a magically poisoned Superman growing ever-closer to death.  There's a lot of nice little touches here, but three stand out for me in particular.  First, the conceit of having Superman be the teammate placed in danger and - for once - through means other than a piece of Kryptonite is a novel one and really helps to sell the drama.  The second is Johns' use of Cyborg, whose powers are used in a uniquely creative fashion.  (At least I've never seen Cyborg act as a universal translator before!)  Finally, there is Aquaman's brief, wordless moment of awesome in which Johns once again showcases how Aquaman's powers are far from useless.

I think I like Tony S. Daniel more as an illustrator than I do as a writer.  His depiction of The Cheetah and her jungle realm is appropriatlye savage and would not look out of place in a Tarzan story.  He also does well with the more mundane scenes later in the second half of the book when we get to the other major subplot in need of resolution. 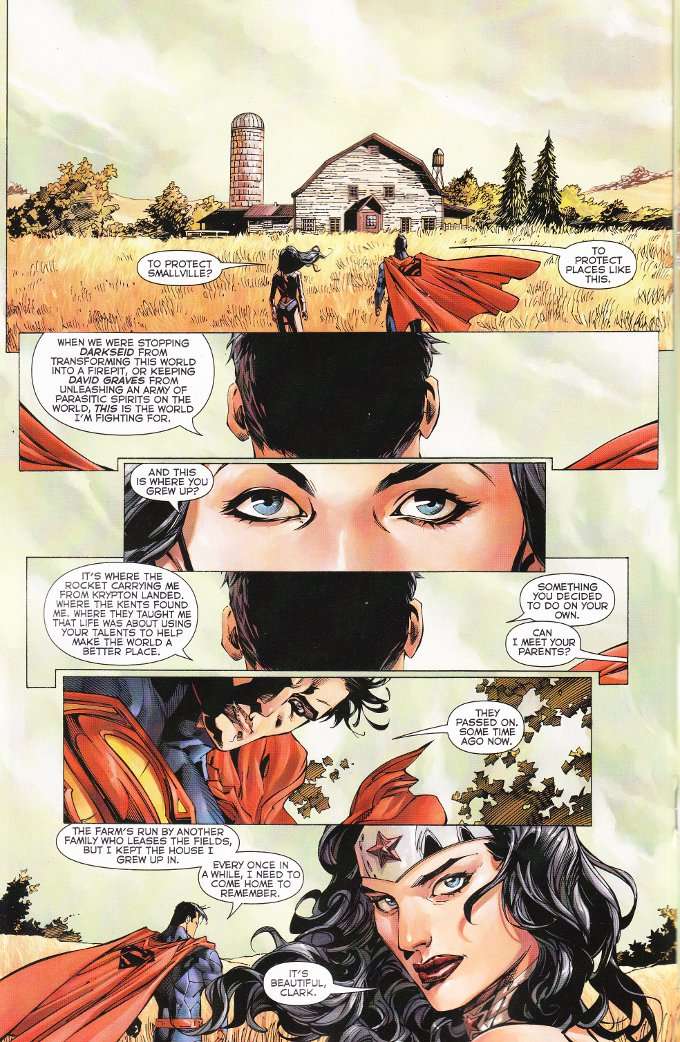 One big complaint that many DC Comics fans had about the declaration that Superman and Wonder Woman were now a couple lay in how sudden the declaration was made.  There was no build-up in Justice League to suggest such a thing was happening - no hint of romance or even a suggestion that the two viewed one another as anything but teammates.  While it may be too little, too late, the second half of this book is  a step in the right direction.  It focuses upon Superman attempting to show Wonder Woman who he really is - not in the sense of his secret identity but by showing her places that are important to him and taking her to do things that remind him of the people they are protecting.  This is something that the Amazon Princess has never spent much time doing and it helps to emphasize the main difference between the two heroes.  Wonder Woman, first and foremost, is a warrior.  Superman, first and foremost, is a protector.  Both characters get some much needed development and the idea of a romance between the two seems a little less forced as a result.

Less enjoyable, however, is the back-up story featuring Shazam.  Or, as I'm quickly thinking of him in my own head, Sham-zam.  I had hoped we were done with these back-up stories after last month's excellent story involving Green Arrow and Steve Trevor teaming-up.  But it was not to be.

Thankfully, we see very little of Billy Batson this time around, save for a scene in which he and his cohort Freddy buy Billy a trenchcoat to cover up his costume and ponder how to spend the rest of the $20 they were given for saving a woman from a mugger.  Most of the story focuses upon Black Adam, learning something of how the world has changed since he last walked upon it and further learning that some things have not changed.  Namely, the powerful still stomp upon the weak for their own glory, though the pharaohs now call themselves CEOs. 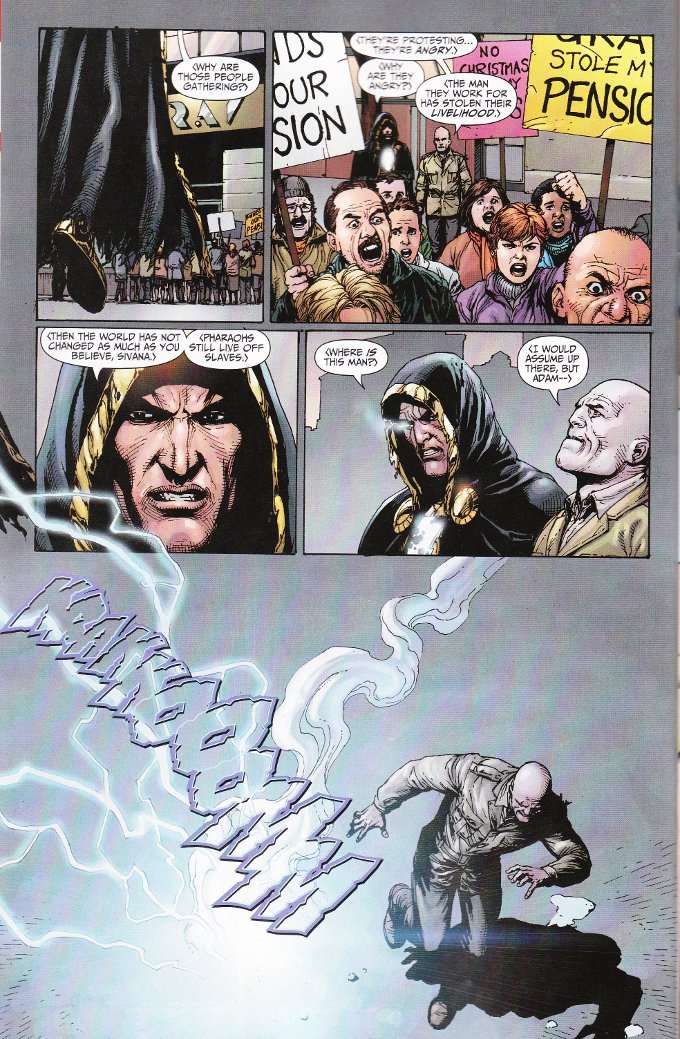 Is it wrong that I find myself cheering Black Adam in this story?   Should I NOT be rooting for him to slap some sense into Billy?  Because Johns' take on Black Adam so far seems to be exactly the same as how he wrote the character back in JSA and so far Black Adam has been the most heroic person in this book ignoring - you know - the whole dropping a pension-stealing CEO to his death thing.

Gary Frank's artwork is still uniformly excellent.  Indeed, I'd argue it's far better than this story deserves.  I'm hard pressed of a way to describe precisely why I find Frank's work so good.  Like the old saying says, I don't know much about art but I know what I like.  Well, I do know a bit about art and I like this.  So take that for what it's worth.

All in all, this book is definitely worth your four bucks.  I had been on the fence about it for a while but for now I'm in, if only to see what Johns does with his upcoming crossover with Aquaman.
Posted by Starman at 1:00 AM