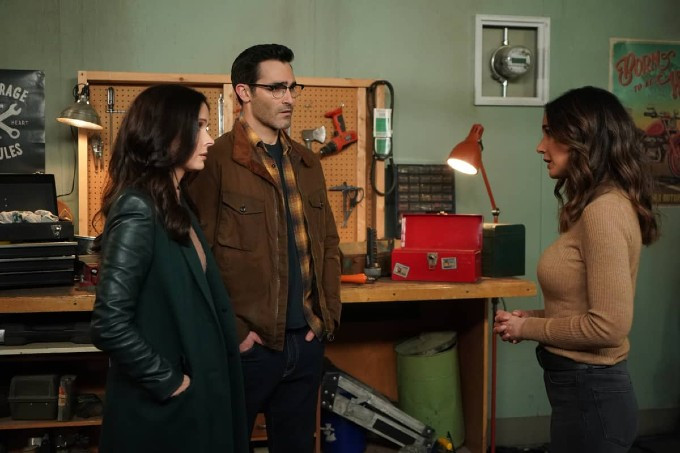 Lana is left reeling by the revelation of Clark's secret identity. as Superman turns to an unexpected ally for assistance in destroying the pendant he recovered from Bizarro World.

Smallville (Lana makes reference to the weird things that happened in their town when she and Clark were young.) and The Lord of the Rings. (The destruction of the pendant scene.)

The series' refusal to acknowledge Supergirl's existence reaches new heights of absurdity with Clark going out of his way to get Tal-Rho to help him destroy the pendant rather than ask Kara for help. (Granting this is born of Clark just seeing a heroic Tal-Rho on another world and wanting to give his half-brother a shot at redemption, time is of the essence and there's too many steps to the plan.)

Adam Rayner has a subtlety hilarious and powerful performance as Tal-Rho here.

The effects work of the volcano fight is great.

The episode title is a play on the phrase "The Ties That Bind," which was also the title of 202.

This episode confirms that Natalie was working on an armored suit of her own. In the comics, Natasha Irons created her own armored suit and adopted her uncle John Henry's Steel identity.

John Henry and Sam Lane determine that Ally's pendant is nearly impossible to destroy in practical terms. It is not indestructible, but destroying it requires more power than even Superman has and it requires a level of energy that is dangerous to attempt with all the tech they have.

Lana: Did you ever love me?
Clark: Lana, of course I did.
Lana: (bitterly) Just not enough.

(Superman is told he can't save the people of Bizzaro World.)
Superman: I have to try. It's the promise I made. The promise we made.

(Lana confronts Lois over Clark's secret.)
Lana: I don't blame him for not telling me the truth back then. It hurts, but I can't be mad about it.
Lois: Are you sure? 'Cause you seem kind of mad.
Lana: I'm mad at you.
Lois: Me?
Lana: When you moved to Smallville, we didn't have to become friends. We could have been neighborly, waving hello at the bus stop, but you sought me out, and I trusted you.
Lois: Lana, I understand how this must feel for you.
Lana: No, you don't, Lois, because I've told you a lot. After Sarah's quinceañera, when my marriage was falling apart, I called you. You've become the person that I call. And this whole time you've been keeping this huge secret from me.
Lois: It wasn't my secret to share.
Lana: But you knew, and I didn't, which means our entire friendship was built on a lie. There's nothing real between us.
Lois: Please don't say that. It's not true, and it's not how I feel.
Lana: Maybe not... but it is how I feel. And the worst part about it is that you've made me a liar, too.

Tal-Rho: Hello, Lois.
Lois: What the hell is he doing here?
Clark: (sighs) It's complicated, but if I'm gonna have any chance of destroying Ally's pendant, I need his help.
Tal-Rho: I've come to try and make amends.
Lois: Oh, really? Well, which part did you want me to forgive first... how you kidnapped my son? Or how you tried to eradicate all of humanity?
Clark: Lois....
Lois: Or was it when you rewrote my article in the Daily Planet?
Tal-Rho: (To Clark) I told you she'd bring that up.

The episode begins right where 211 ended, with Lana and Clark on the highway after Clark demonstrated his powers.

Lana asks how she never saw this before. Clark says that people see what they want to.

Lana makes reference to the car crash that she, Clark and Pete Woods somehow survived while driving back from a Soul Asylum concert in 101.

Clark explains to Lana that the reason he left Smallville so suddenly after that concert was because he needed to figure out exactly how to best use his powers. He also reveals that he came back for Lana, but she was already engaged to Kyle Cushing when he decided to rekindle their romance and tell her his plans to become Superman.

Jon is allowed to return to in-person classes.

Jordan wants to stay home in case Clark needs help, but Clark says he will get Jordan if he needs him.

Clark tries to call Lana to warn her about Lana-Rho, but Lana is not taking his calls.

John Henry and Sam Lane are reportedly running tests on the Pendant Clark recovered together.

Sarah says hi to Natalie in the hallway while she is with Jon and Jordan, but ignores the boys and doesn't stop to talk.

Jon is greeted by his former friends on the football team and given a hard time about getting the season cancelled. Jon counters by pointing out that he could have outed them all as X-K users and didn't.  He also dismisses high school sports, and high school, as unimportant because the world is coming to an end.

Jordan counters this by saying Jon has gotten into eco-activism and is worried about climate change.

There is a brief montage of scenes where Lana noticed clues that Clark was Superman. These include noticing that Clark has barely aged after he moved back to Smallville (101), her comment that Clark looked like he was carrying the weight of the world on his shoulders (102) and Superman telling Lana she is a hero (110) although this last scene is edited out of sequence, with the last line being Lana wondering if Superman just lied to her.

Kyle meets with Lana at the diner and asks her how Sarah liked the car they gave her. He quickly realizes Lana is troubled about something and asks what is going on. Lana dodges the question and asks him to pick up their daughters from school, after Lois texts her and says they need to talk.

This is the first time Lana has ever lied to Kyle about anything.

Clark visits Jon-El in custody and asks him for help in stopping Ally Allston. Jon-El refuses.

John Henry agrees the pendant is almost impossible to destroy. He suggests they use a controlled explosion to close the portal to Bizzaro World instead.

Clark refuses to consider this, since it will leave the people on Bizarro World trapped under Ally Allston's thumb.

Lana meets with Lois, but tells her off for not telling her Clark's secret and becoming her friend with that weight hanging over them.

Natalie shows Jordan and Jon the super-suit she's built after they promise not to tell their parents.

Natalie says she can refit the suit for Jon so he can protect himself from his doppelganger.

Natalie asks Jon and Jordan for help in getting some X-Kryptonite so she can power her suit.

Clark visits Tal-Rho in his prison, where he is reading a Pictorial History of Mines.

Tal-Rho makes reference to "The Fault In Our Stars," which is apparently in his library.

Clark tells Tal-Rho about the Bizarro Tal-Rho who helped him and suggests that together they could destroy Ally's pendant.

Tal-Rho asks what he gets in exchange for his help and Clark offers to get him more books. Tal-Rho says he knows he'll never be released and the only thing he really wants is a chance to be a brother to Superman.

Clark gets Tal-Rho out of prison and takes him to the farm house to meet with Lois and ask her forgiveness for everything he did as Morgan Edge.

John Henry and Sam Lane are not happy with Clark's idea to work with Tal-Rho to destroy the pendant. Neither is Lois, but she agrees it is the best plan they have.

Jon, Jordan and Natalie go into the Shuster Mines looking for another deposit of X-Kryptonite.

Kyle picks up Sarah from school and starts asking her if she has noticed Lana acting strangely. Sarah tells him about Lana's lie that she went on a six hour walk the day before - her lie to cover up her kidnapping.

Jordan tries to use his heat vision to cut the X-Kryptonite out of the rock around it. This triggers a cave in.

Jordan is able to run Natalie and Jon out of the mines at super-speed. Unfortunately, he leaves all the X-Kryptonite they had behind.

John Henry confirms the theory proposed by the Bizarro Lara hologram - that two Kryptonians could destroy the pendant together.

Sarah has started writing her own songs in the wake of her break-up with Jordan.

Kyle overhears Sarah singing and says she is good.

Kyle starts grilling Sara for information on Lana's dating someone new and Sarah tells him she's having enough trouble with her own break-up without having to deal with his too. Kyle withdraws the question.

Kyle calls Tonya - the woman with whom he had the affair.

Lois confronts Lana at her office and apologizes for hiding the truth from her.

Lois says that she never really had a lot of friends in Metropolis, devoting herself completely to her work and her sons. Knowing how close she was to Clark, she really hoped they could become friends too.

Lois tells Lana that there's more she needs to know about Clark's life. She starts by telling her that Jordan has powers and that was why he wasn't there for Sarah.

Clark and Tal-Rho take the pendant into the heart of an active volcano to destroy it.

Ally Allston shows up and starts draining the energy from Tal-Rho and Clark as they fight to keep her from the pendant.

Steel is able to save Superman from Ally, as her powers don't seem to work on him for some reason.

The pendant is destroyed, but Tal-Rho escapes in the confusion.

Superman notes that Ally was somehow able to siphon his power to make herself stronger. He felt the same sensation when trying to stop her from merging with her Bizarro self in 210 but this time it was 10 times worse.

Lois isn't worried about Tal-Rho being a threat, pointing out that he risked his life to help Superman twice.

Lois also notes that Tal-Rho brought her peonies, which are her favorite flower.

Sarah makes dinner for her mom - salad with hot dogs and pumpkin seeds.

Sarah tells Lana that Kyle knows something is up and asks if she is dating someone new. She says she doesn't care if she is, but that Kyle deserves to know if she is moving on.

Sarah also tells Lana that whatever is going on, she can be trusted. Lana agrees she can.

Lana offers Sarah an internship working in her office. She says she will consider it.

Jon and Jordan join John Henry and Natalie for dinner. He tells them that the pendant has been destroyed.

Lana decided not to tell Sarah about Jordan or Clark because she can't ask Sarah to lie to her father or sister.

Lana says she isn't mad at Lois or Clark anymore but she wants their families to cut ties so she doesn't feel like she's lying to her family every time they hang out.

Kyle takes Sarah to Tonya's bar, revealing that he got her a gig playing her songs there.

The government facility where Jon-El and Tal-Rho are being held.
A government prison on Bizarro World.

Ignoring that Clark has a cousin he could turn to for help far easier than Tal-Rho, this is a fantastic episode that builds the stakes and develops all the relationships well.
Posted by Starman at 7:34 PM