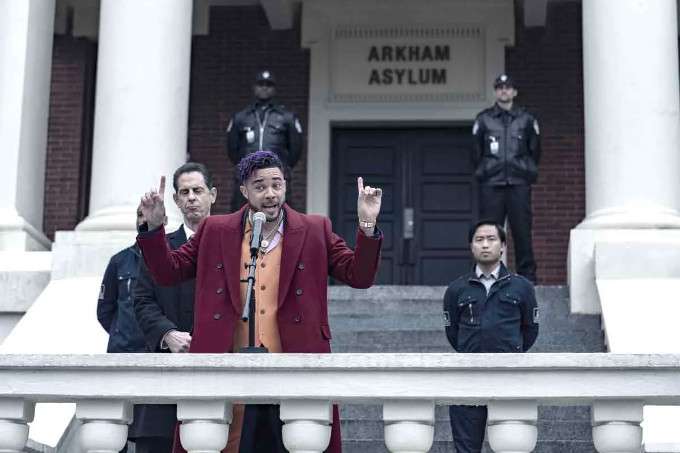 With Marquis revived and Jada Jet out for blood, Ryan finds herself under fire on all fronts. As Gotham's worst villains unite and prepare for war, Sophie joins Luke on a mission, as Alice helps Mary work through her Poison Ivy possession.

The Batman comics of Grant Morrison

Alex Morf steals the show as Zsasz. One wishes he had been set up as the main villain of the season, as he's far more interesting than Marquis and has a strong adversarial chemistry with Javicia Leslie.

The fight scene between Ryan and Zsasz is great.

This episode marks the directorial debut of Camrus Johnson, who plays Luke Fox.

This episode confirmed that Harley Quinn was once Harleen Quinzel in the Arrowverse and that she existed in the post-Crisis Arrowverse.

Marquis' costume pays tribute to the Joker, with a purple suit jacket, violet shirt and orange vest. His hair is dyed dark purple instead of green, however.

Joker's joy buzzer was designed so that, when applied to the head, the electrical impulses rendered the parts of the brain controlling empathy dormant. In theory, a zap to a psychotic brain would reopen those neural pathways.

Doctor: Mr. Jet, I appreciate your generous donation to Arkham, but I do have some concerns about your plans for a work release program.
Marquis: I see it as more of a compassionate non-confinement.

Marquis: So it's true. You mark each of your kills with a scar.
Zsasz: Consider my body my resume.
Marquis: Well, from the look of it, you're probably already collecting your pension, huh?
Zsasz: Heh. There's always room for a few more.
Marquis: Ahh. I was hoping you'd say that.

Mary: Does it ever get easier, living with the things you've done? And don't say it's not my fault.
Alice: Oh, that's what the Bat Team's been telling you?
Mary: Yeah.
Alice: That's probably because they think you're too emotionally fragile to handle the truth.
Mary: Which is?
Alice: It's totally your fault. That hunter didn't vine hurl himself into the tree, and dyeing your hair back to its natural color doesn't change that.
Mary: So... so what do I do now?
Alice: Easy. You take all of your feelings, and you bury them deep down inside, and you cover them up with a layer of "people die all the time", and then you sprinkle on some "he probably did bad stuff, too", and then you pack it down with a nice little bit of "he might have even deserved it", and then, poof, all those icky, no-good feelings go bye-bye! At least that's what I'd do.
Mary: (uncertain) But... I'm not a sociopath.

Zsasz: I'm actually glad that we ran into each other, Ryan, because I got to say you have done really well for yourself.
Ryan: (dryly) Much appreciated.
Zsasz: Uh, I meant to get you a congrats gift after you made Wayne CEO, but by the time I got around to it, you'd already been disgraced, and it just felt like it'd be bringing up a sore subject, but honestly, congrats and... sorry.

Jada: You know this man?
Ryan: In another life.
Zsasz: Life. Thank you. Man, I was really struggling for a segue there, and you totally bailed me out. Life, as in yours, Ms. Jet, is hanging in the balance here.
Jada: You got the evidence you came for.
Zsasz: Heh. I'm afraid it's a little more complicated than that.
Jada: Then why don't I make it simple? Whatever you're being paid, I'll triple it.
Zsasz: Well... Considering your son hired me, killing you just lets him inherit more money that he can then give to me. So it's really just a waste of our time, yours especially.
Jada: Well, if it's me you're after, then you can let my daughter go.
Zsasz: Whoa. Daughter? Wait. I thought your mom was dead, right? Dead mom number one died in childbirth, blah, blah, blah, foster care, and then you were adopted by dead mom number two. So how does that make her soon-to-be dead mom number 3?
Ryan: She's not. She's my biological mother, who didn't die in childbirth.
Zsasz: So after years of separation, you two actually found each other and reconnected only to discover that despite being apart you both stormed the corporate CEO patriarchy to become powerful titans of business? Now that's what I call a happy ending. Heh. Except for the part where I have to do what childbirth didn't, but... uh-oh... twist! There is a chance for a last-minute rescue but only if Batwoman comes to save you.

Zsasz: The suspense might kill me before I have to kill you. Heh. So if you two have any last mother-daughter things you want to discuss... funeral arrangements, perhaps... now would be the time.

(Jada has just told Ryan the tragic truth about why she abandoned her.)
Zsasz: I just want to thank you both for letting me be a part of this special moment. Truly. Thank you. But... It seems Batwoman is a no-show, and I'm afraid a deadline is a deadline. It's a very violent word when you think about it, but entirely appropriate to this moment. Ryan... any last words for Ms. Jet
Ryan: Yeah. Mom... Duck.
(Ryan moves into action and takes Zsasz down.)

Jada:mSo where do we go from here?
Ryan: Well... based on recent history, you call Dana DeWitt with your latest scoop outing me as Batwoman.
Jada: I wouldn't do that to you.
Ryan: You sure about that? Ever since we've met, all you've done is take away anything good in my life. You came after me as CEO of Wayne, and you came after me as Batwoman, and you think some sob story about how you tried to give me $2 million would make a damn difference. Did you ever wonder where I was, how I was doing? Did you ever even think about me?!
Jada: Of course I thought about you!
Ryan: Yeah. Just not enough to check up on me. You want to know what I would have wanted instead of $2 million? A mom who cared enough to make sure I was in good hands, that I had someone to walk me to school my first day of kindergarten, someone to make me cupcakes for my birthday, someone to yell at me for staying up too late watching TV, but I had to wait 14 years for any of that!
Jada: You're right. And look at you... the child I gave nothing to, and you achieved all of this. I gave Marquis everything... And look how he turned out. Maybe the greatest thing I ever did for you was staying out of your life.

Marquis: If I knew you were gonna be snooping, I'd have cleared my browser history.

Mary: So everything you said your therapist told you about healing, doing all the hard work, those were all lies?
Kiki: Oh, no, no, no. That was all true. I just didn't want to do it. In my defense, though, my therapist was Harleen Quinzel, so, you know.

As the episode opens, the water diverted from the Gotham Dam into the sewers taxed the city's cheap infrastructure, leading to flooded sewer lines which backed up into the streets and flooded the area around Mary's clinic.

Marquis left a clown doll behind in his bed after escaping Mary's clinic.

Mary blames herself for what has happened, due to her helping Poison Ivy recover her strength and telling Marquis Ryan's secret identity.  The rest of the team tell her that wasn't really her and not to worry about it.

Luke suggests that maybe his father's AI might have some information on the joy buzzer that might help, but that they have no idea what happened to it.

Mary tells everyone she gave the AI to Marquis in 308.

Kiki Roulette was the name of the Joker's toymaker. She created his acid flower, nerve gas bombs and joy buzzer. Alice suggests that she might be able to repair the joy buzzer.

Kiki Roulette was said to have avoided capture and disappeared.

Mary decides to try and find Kiki after Luke tracks a woman named Kathleen Rogers with a similar eye-glasses prescription. Alice goes with her.

Ryan tells Sophie they can figure out their relationship later.

Marquis gives a speech at Arkham about the city failing the mentally ill and how he's starting a program to help them out while donating money to support the asylum.

Ryan recalls that Jada said that she had something on Marquis that protected her.

Marquis makes arrangements to release the worst criminals in Arkham, including serial murderers and rapists out to work for him. This includes Victor Zsasz.

Mary asks Alice for advice on coping with the killings she committed as Poison Mary.

Luke breaks into Wayne Tower, with Sophie coming along.

Sophie is the only person on the Bat Team with SWAT certification.

Ryan goes to Jada to beg her to release whatever evidence she has regarding Marquis because he is about to endanger the city.

Zsasz goes after Jada and recognizes Ryan from their earlier encounter.

Zsasz says that he left a note on the Bat-Signal, so there's still a chance that Batwoman might save Jada and Ryan, as he had instructions to kill Jada in front of Batwoman and is under orders to wait from Marquis.

Jada reveals that she did not pay a doctor $2 million dollars to cover up her affair and pregnancy. She gave that money to her doctor to give to a young couple she had been told was desperate for a baby of their own. It was not until years later that Jada learned that Ryan had been abandoned at a fire station and the doctor had kept the money for himself.

Jada realizes Ryan is Batwoman after watching her take down Zsasz and figures out that is why Batwoman didn't come to save her.

Alice and Mary take Kiki to The Joker's old workshop, where her tools were.

One of the items in the workshop is a Talkie Teddy doll, which Kiki combined with a fragmentation grenade. 2 adults and 3 children were killed by the deadly dolls, with another 12 suffering permanent injuries.

Kiki tells Alice and Mary that her therapist gave her some advice on how to cope with the guilt of being a killer and says there was no secret beyond learning to live with it and take responsibility for what you did.

Sophie admits that she was into Ryan before she knew she was Batwoman, after Luke jokes about her having a type.

Luke recovers the AI of his father but decides to use the opportunity to hack Marquis' laptop.

Ryan tells off Jada for abandoning her and thinking she can be easily forgiven.

Luke contacts Ryan and tells her they found out Marquis made contact with Kiki Roulette.

Kiki repairs the joy buzzer but says it has only enough charge for one go.

Marquis's followers show up and capture Alice and Mary, having been called by Kiki.

Marquis and his followers ambush Luke and Sophie.

Everyone is able to escape from Marquis' cluthes.

Jada reveals that Ryan was named after Jada's father.

The Lucius Fox AI tells Luke that he is proud of him.

Marquis has plans for the joy buzzer and shocking one more person.

Mary looks for Alice in her old subway lair.

Mary made a bug-out bag for Alice to get her out of town.

Alice says she doesn't want to be Alice anymore and wants to get the joy buzzer to make herself sane.

Ryan kisses Sophie and they have sex.

Luke, despite being a technical genius who is called upon to analyze alien technology by ARGUS, cannot fix the Joker's joy buzzer.

A surprisingly solid episode, with some great witty banter, which minimizes all the most aggravating aspects of the season to date.