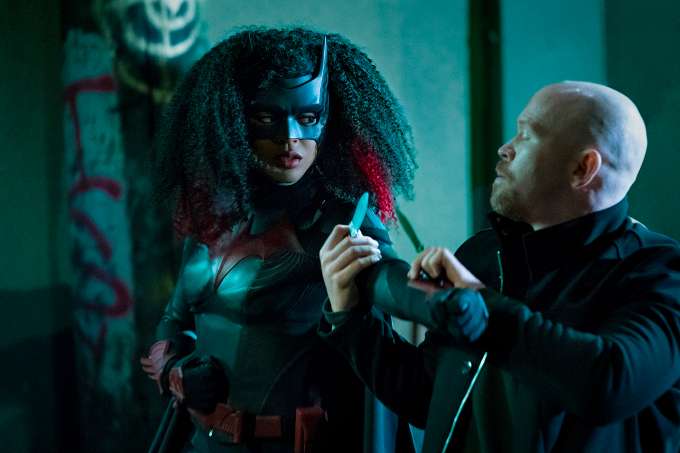 Plot
Ryan continues to rise to the challenge of being Batwoman, but it's hard to say which is harder; earning the approval of a skeptical Luke Fox or staying on the good side of her parole officer and making their meetings while saving the city. Meanwhile, as the serial killer Zsasz begins carving a swath through a list of seemingly unconnected victims, Jacob Kane begins searching Kate's recovered phone for clues to her disappearance, as Alice comes face to face with Safiyah Sohail.
Influences
Batwoman: Rebirth (character of Safiyah Sohail) and Batman: The Last Arkham (character of Zsasz)
Goofs

Ryan abandons her fight with a False Face Gang member to go to an appointment with her parole officer, despite the fight appearing to take place at night and the parole officer asking if her almost being late means that she has a day job. (The fight could be taking place in a part of downtown Gotham the sun doesn't reach during the day.)
How exactly does Ryan alter the Bat-Suit without Luke's help? Surely the strongest ballistic fabric on Earth can't just be altered with a normal sewing machine or needle and thread? (Never underestimate how awesome Lucius Fox was when it came to weaving fabric.)
Performances
Alex Morf does a fantastic job capturing the intellect and dark humor of Zsasz.
The script doesn't give Shivaani Ghai much to do beyond be cryptic, but she manages that quite well, giving Safiyah an aura of mystery appropriate to the character's reputation so far.
Artistry
The opening scene perfectly establishes Zsasz as an educated and witty man, as well as a sadistic maniac through his actions and dialogue. The direction is top notch and the creepy music sells the scene.
Bat Trivia
This episode marks the first appearance of the Arrowverse version of Victor Zsasz, who first appeared in the comics in Batman: Shadow of the Bat #1 where he was the chief villain of The Last Arkham storyline. A vicious serial killer who was sealed in a coffin-like box inside a cage for 16 hours a day, Zsasz was as brilliant as he was sadistic and proved capable of manipulating Dr. Jerimiah Arkham through simple conversation. Zsasz's background was later fleshed out in the story The First Cut Is The Deepest in The Batman Chronicles #3.
A scion of an old-money Gotham City family, Victor Zsasz was well-loved, well-educated and grew into a successful captain of industry. He lost everything, however, when he became addicted to gambling following the death of his parents and bet his family fortune on one high-stakes game of poker against The Penguin. Seeing his reflection afterard, Zsasz realized how empty his life was outside the thrill of risk and nearly committed suicide by jumping off a bridge. He was saved, ironically enough, after a mugger attacked him with a knife. The struggle invigorated Zsasz, who was stunned to see the same deadness in his attacker's eyes that he had seen in his own reflection. This revelation prompted Zsasz to start "freeing" the "zombies" around him from the drudgery of their lives and cutting himself every time he claimed a victim to remind himself that he was as human as them.
Zsasz has been adapted into several live-action productions even before his appearance on Batwoman. He appeared in a minor role in Batman Begins, where he was an Arkham Asylum inmate who had been an enforcer for Carmine Falcone. This background was later applied to the version of Victor Zsasz seen in Gotham. Another version of Victor Zsasz was the right-hand of Black Mask in the Birds of Prey movie.
Curiously, the Arrowverse version of Zsasz is perhaps the most comics accurate yet, owing to two factors; he is shown to be an independent agent rather than another villain's flunky and he seems to have a background as a man of wealth and taste despite being familiar with the wrong side of the tracks in Gotham City.
In the opening scene, Zsasz arranges the bodies of the adulterers he was hired to kill so that they are lying in bed next to each other, seemingly asleep, holding hands. In his early appearances, Zsasz posing his victims before leaving the scene of the crime was as much a part of his MO as carving hashmarks into his flesh to keep a tally of his crimes.
This episode marks the first appearance of Safiyah Sohail on camera, though she has been referred to in earlier episodes.
In the comics, Safiyah Sohail first appeared in Batwoman: Rebirth #1 in April 2017. The ruler of the pirate nation of Coryana, Safiyah was a one-time lover of Kate Kane, during her journeys around the world.
Little is revealed about Safiyah's history in the Arrowverse beyond the fact that she trained Alice in how to fight, shortly after Alice escaped from Dr. Cartwright. She is still the Queen of Coryana, but she claims to be more interested in protecting her nation from outside exploitation than anything else.
A reference is made to Black Mask being the leader of the Arrowvese False Face Society at the end of the episode, as one of the Crows identifies the gang's leader as a man in a black wooden mask. A full biography will be written here when Black Mask makes his first Arrowverse appearance.

Jacob says that a painting by Jack Napier is on Kate's phone. Jack Naiper is the name that The Joker had before he became The Joker in some of his origin stories, including the Tim Burton Batman movie.