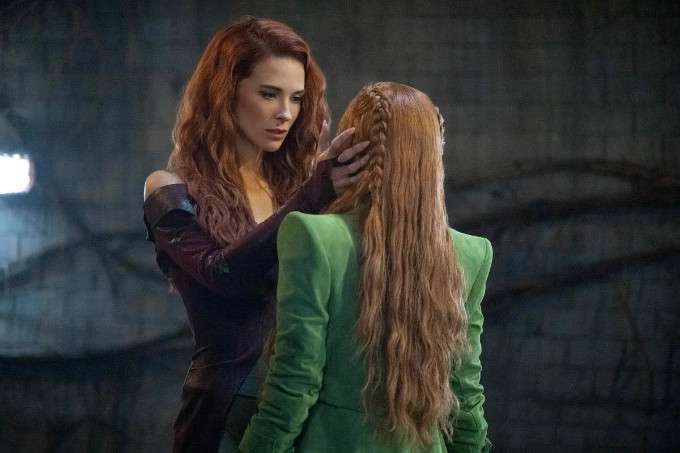 Batwoman's hands are full as she juggles Jada Jet's demands, Poison Mary's ever-increasing power and a new romantic entanglement. Loyalties are tested and motives come into question as Batwoman races against the clock to once again save Gotham City from a newly awakened Poison Ivy.

Various classic Batman comics with a villain trying to destroy a dam.

Bridget Regan is far better as Poison Ivy than this show deserves.

The special effects work for Poison Ivy's plants is solid.

The sequence in which Ryan jumps onto a moving ambulance is fantastic.

This was the highest rated episode of Batwoman ever on IMDB, with a 7.8.

Gotham Dam provides power to half the industry in Gotham City and is responsible for the death of one species of fish.

Sporeling transference is the process by which Ivy was able to rejuvenate herself through Mary. Despite seemingly being a parasitic transfer of life energy, Montoya insists that Ivy really does care for Mary. This suggests a symbiotic bond, like when basil plants and tomato plants thrive together.

Renee Montoya developed a pheromone blocker that negated Poison Ivy's ability to control her. Giving this formula to Mary enables her to weaken Poison Ivy when she tries to tap Mary's energy.

Ivy: That was epic. Did you rehearse that?
Mary: Ohh. I've been dealing with the horrors of the Gotham healthcare system for a while now, but I think that you just unlocked something.
Ivy: You found your calling, Doc.
Mary: I get it now. Justice, using this gift to level the playing field.
Ivy: Now the press is gonna label you a villain, they're gonna call you unhinged, use way too many puns, but if you just do what feels right, they can't stop you.
Mary: Yeah. Pam... Your nose. It's happening again.

Alice: (To Montoya) Let's cut to the chase. You are going to tell us what Pam did with Mary. Or this psycho killer is going to show you what she can do with a lemon zester.
(Alice smiles as she brandishes the tool.)
Alice: Trust me. I've done worse with less.

(Alice and Ryan overhear Montoya telling Sophie it's obvious she has a crush on Ryan.)
Alice: She has a good point.
Ryan: Whatever.
Alice:"Whatever"? That's a big deal. Sophie likes you back.
Ryan: "Back"? Who said I liked Sophie?
Alice: Uh... all the girls on the playground. Come on. It's obvious. You're avoiding your feelings for Sophie, which is why you asked me to be your wheel woman and not her. You and I are the same, Batty. We pretend like we don't care, but it's only because when we get something good, we know we're gonna screw it up.

Alice: You're a portable battery, Mary, and you're all out of charge, so listen to a Kelly Clarkson song and move on.
Mary: What are you doing here?
Ryan: Who do you think told us about Pam?
(Alice actually looks ashamed about this.)
Mary: Wow. You know... Guess you were right. Guess I am the crazy one. Says the Arkham inmate still pretending she's stuck in a children's fairy tale and a grown woman dressed like a flying rodent.
Luke: Okay. You made your point.
Mary: (gesturing at Luke and Sophie) You know what? Don't even get me started on daddy's little Robocop or the Queen of Unemployment.
Sophie: (defensive) I didn't say anything.
Mary: Yeah, but you're here, aren't you? Part of this friend-tervention or whatever this is? But if you were all actually my friends, then you'd respect my wish when I said to leave me alone!

(Montoya has opened the cargo bay doors of the private plane she and Ivy are on.)
Ivy: What the hell am I supposed to do, jump?
Montoya: Why is that crazier than anything you've done before?
Ivy:  I'll 100% die.
Montoya: Then stay! I didn't sell you out, Pam. I negotiated a deal for your freedom. No running, no rules, but it means doing things my way for once. So what's it gonna be?
Ivy: Close the damn door.
(Montoya does so.)
Ivy: Where are we going?
Montoya: Sophie Moore told me about an off-the-grid island where plants are worshipped and industry doesn't exist.
Ivy: Sounds like a fantasy.
Montoya: Close. It's called Coryana.

As the episode opens, Ivy is training Mary in the use of her powers.

The man Ivy and Mary have taken captive is Harold Marlowe, CEO of Gotham United Healthcare.

Mary kills Harold, because his company denied the insurance claims of thousands of people to line his own pockets.

Ivy's nose begins dripping blood. Mary notes that it is doing it "again," suggesting this has happened at least once before.

Ivy is able to heal herself by drawing off of Mary - a process that is painful to her but does not seem to be hurting her yet.

Alice tracks down the Bat-Team at the Hold Up and informs them that Ivy was able to reach out to Mary all the way in Metropolis.

Alice says their best chance of dealing with Ivy is to go after Renee Montoya.

Ryan asks why Alice came back to Gotham to tell them all this, since her immunity deal with Montoya is null and void, which makes her a wanted fugitive in Gotham City.

Ivy sympathizes with Mary's desire to go after the people who are ruining the health care system, revealing that her younger brother had severe asthma growing up and that he died when he was 12. Her interest in plants was fueled by her mother's search for herbal remedies since they didn't have the money to get him medicine.

Later, Ivy learned that her brother's asthma was caused by tainted water from the factory up the hill from their home.

Ryan catches Montoya as she's trying to skip town on an airplane.

Luke calls Sophie in to help. Ryan says this is fine, but she's clearly still upset at Sophie.

Luke reports that the Bat-Signal is lit.

Ryan investigates the signal and finds Jada Jet is there.

Jada reveals that she has Joker's joy buzzer and demands that Batwoman hand over Marquis immediately.

Batwoman asks to get take the joy buzzer and get it repaired first. Jada agrees, but says she wants Marquis back by midnight or there will hell to pay.

Ivy asks Mary to help her with her plan to destroy Gotham Dam.

Mary says she would like to help and thinks she owes Ivy, but that she doesn't need the heat that comes with having destroyed half the city.

Ivy says she respects Mary's wishes and can go it alone without her... after draining her strength one more time.

Mary is found unconscious by some of the dam workers.

Sophie realizes that Ryan didn't tell Luke about her kissing her in 309.

Gotham Dam is revealed to be 18 miles east of the city.

Ryan takes Alice with her in the Batmobile instead of Sophie to help her stop the ambulance carrying Mary.

Ryan and Alice overhear Montoya and Sophie talking about their one night stand from 307.

Montoya says that it's clear that Sophie only slept with her because her first choice wasn't available and it's pretty clear Sophie has a crush on Ryan because Sophie spent most of their night together talking about Ryan.

Alice tells Ryan that it's clear she also has a thing for Sophie, because there's no other reason Ryan would ask Alice to come with her on a mission instead of Sophie unless there was something going on with Sophie she was trying to avoid dealing with right now.

Ryan jumps onto the ambulance to get them to stop.

Alice tells Ryan about the hunter that Mary killed in 309.

Montoya recognizes the symptoms Mary is undergoing, which include blood in her nose and ears.

Montoya tells the team that Ivy is going to destroy the Gotham Dam, which was her plan 10 years ago before Batman and Montoya stopped her.

Montoya says they will need Mary's cooperation to stop Ivy at this point.

Mary is told that she killed an innocent hunter, but she doesn't believe Ryan.

Mary still agrees to help stop Ivy because she doesn't want innocent people to get hurt.

Montoya comes up with a plan to use Mary as a Trojan Horse to weaken Poison Ivy. This will also likely break Ivy's control of Mary, assuming it doesn't kill her first.

Luke goes to the damn and uses the Batwing suit to take control of the dam's systems that Poison Ivy hacked.

Ryan is able to beat Poison Ivy in a fight after Mary weakens her.

Mary is said to have brown eyes once Poison Ivy's control is broken.

Everyone on Team Bat apologizes for taking Mary for granted.

Mary feels guilty because she killed someone, but everyone insists that it was Poison Ivy who did it, not her.

Ryan tells Alice that she figured out that she came back to Gotham because she honestly cares about Mary.

Alice says she still isn't going to help Alice cut a deal for her freedom.

Alice reminds Ryan that she was so busy dealing with Poiosn Ivy that she missed Jada Jet's deadline.

Montoya negotiated a deal for Poison Ivy's freedom and takes her to the island of Coryana.

Luke is said to be working on repairing the joy buzzer but Jada isn't answering her phone.

Ryan says that Sophie kissing her did not get her out of her head. It's just making her think about them kissing more.

Jada Jet is revealed to be on TV, calling a press conference revealing the existence of the Bat-Trophies to the public and blaming Batwoman for their release.

It is revealed that while Luke was able to stop the dam from breaking, there was still some mass flooding throughout the city, including the area where Mary's clinic was located.

The last shot of the episode shows water leaking into Mary's lab and dripping onto Marquis' body.

A cargo plane somewhere over the Atlantic Ocean.

It should be noted that, once again, all the heroic action in the episode is facilitated by Alice and Montoya with Team Bat being stuck in a supporting role in what is nominally their show.

It should also be noted that Team Bat, after promising to take Mary more seriously, continue to treat her with kid gloves and insist that she's this pure-hearted innocent even as she tries to cope with the revelation that she killed at least one man. (Probably two if you include the insurance company CEO.)

One of the best episode's of the series to date, with some great effects and stunt sequences. Had this been the season finale and ended five minutes sooner, it would be perfect. Unfortunately, we have to get that twist about Jada Jet being the real big bad and Marquis escaping for more new Joker shenanigans. .